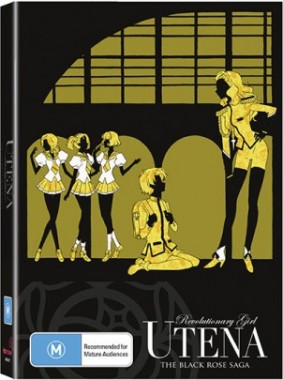 Overview
The fairytale continues. The dashing Prince has saved the damsel from her horrible fate at the hands of the dark forces that pursue her. They ride of into the sunset and all is well. Unfortunately, it isn’t time for our courageous Prince’s happy ending yet. A new force has arisen to plague their lives and steal away their joy. A force drawn from deep within a place long left behind. When villainy can be drawn from purity and darkness consumes the light, where are the battle lines drawn? Could the greatest threat to happiness one’s own inner demons? 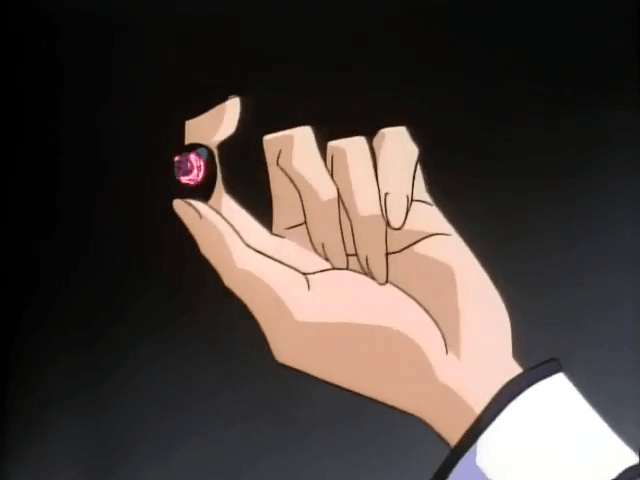 One ring to rule them all…

Story
When we last left our Prince in the making (way back in Part I) she had just claimed victory in the Battle of Self, learning more about her true desires in the process. Having rescued her dear friend Anthy from the clutches of a real jerk. Well, in case you forgot, fear not because this second saga begins with that tried and true anime trope: a recap episode. Framed by a mysterious figure visiting with who appears to be Utena’s mysterious Prince, the man explains Utena’s actions up to this point. However, the man also reveals some more information regarding her quest, revealed as the Path of the Duelist. Each duel fought in the hopes of winning Anthy possessed its own classification, a fact revealed only in the episode thirteen preview. Friendship, choice, reason, love, adoration, conviction and self. Each is an ideal that Utena has fought, overcome and accepted in order to. It is also revealed that the final duel is entitled revolution, one that will see Dios released from the seal that apparently binds him.

With seven victories under her belt, Utena draws the attention of new foes: The Black Rose Duelists. Disguised in plain sight as an establishment for student counselling, the ” High School Genius” Souji Mikage searches Ohtani Academy for viable candidates. Once a student reveals their problems and inner turmoil to him, Mikage uses his powers to place them under his control. Providing them with a blackened Rose Crest ring, taken from a deceased student, Mikage completely transforms them into duellists of the Black Rose. Using these broken troops, Mikage continues to seek his true goal: the death of the Rose Bride. Unlike those who have come before him, Mikage wishes to replace the Rose Bride with one of his own choice, a mysterious boy known as Mamiya Chida. 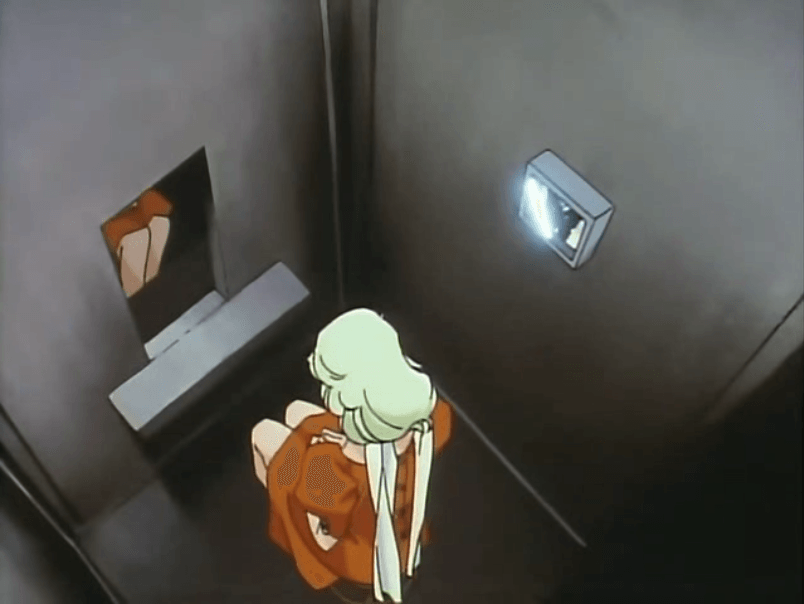 Just as in the first saga, the series continues to explore the complex relationships that exist between the characters of Ohtani Academy. However, due to the fractured nature of the Black Rose Duellists, characters are twisted into expressing the darker side of emotion. Alienation, attachment, jealousy, impatience, limits, dependence and conscience. This new set of duels serves as a representation of compassion that has been corrupted by various facets of life. In further contrast to the consentual partnership between Utena and Anthy, Black Rose bearers have a far more violent interaction with their own companions, the source of their grief. Just as Utena can summon the sword of Dios, those with a Black Rose are able to pry one from the chest of their love interest. The removal of said swords and the manner in which they are obtained present themselves as an allegory for a much more…intimate act. Once broken by Mikage, characters appear to lose their inhibitions in regard to emotion and forcefully take what they wanted all along, resulting in pain for their partner.

The new saga also continues with the trend of including a bizarre epsidoe that holds no bearing on the rest of the series. Once again revolving around the miscalculations of the simple and over dramatic Nanami. Having received a mysterious designer jewellery piece, she decides to wear it everywhere, despite the fact that it’s a cow bell…yep. Over the course of the episode our dear Nanami undergoes some strange transformations, becoming someone truly worthy of her new accessory. Whilst I’m sure there’s some symbolism in here, possibly regarding Nanami’s blind following of trends to be popular, becoming a complacent nobody in the process that others regard no more highly than a cow…it’s still one hell of a weird episode.

The silhouette girls also continue to make appearances each episode and play out their bizarre stories. However, unlike their earlier stories, characters appear aware of their presence and occasionally respond. Though clearly a representation rather than a physical duo, the acknowledgement of the shadows adds a sense of  authenticity to their ramblings. Despite the complexity of their stories, they are usually summed up in single, often sarcastic, sentence. 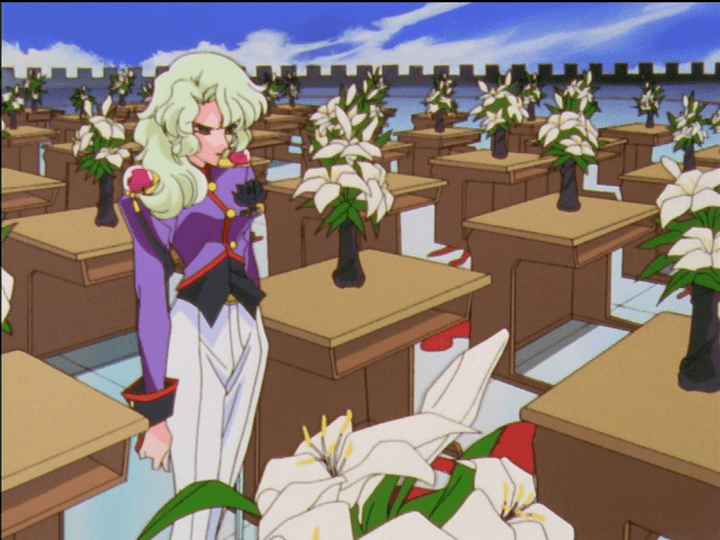 Love what you’ve done with the place

Visuals
The characters of Utena possess a rather lanky physique, a feature that extends to all characters. Each also share a rather angular look, with notably sharp facial features. The overall stoic appearance that this creates is one of the factor that impedes the comdeic moments of the series. Unlike other anime series, the character designs do not change as a visual cue to the tonal change. As a result these moments fall rather flat, blending in with the rest of the series and failing to stand out at all.

One of the main visual shifts from the last saga appears each time a duel commences. As opposed to the previously sparse duelling grounds, it now bears the elements of a classroom. Rows of tables all placed in neat rows, covering the outlines of bodies, those students lost to the schemes of the past. Each desk also carries on it an item thematically relevant to the current Black Rose Duelist. For example, when Kanae is duelling white lilies line the tables. These represent the innocence she carries, longing only to connect with her soon to be family, an ideal that is being slowly destroyed by her corrupted state of mind, represented by the physical shattering of said flowers. The theme of Duelists bearing their own coloured roses also continues, though Utena’s new opponents all don a single shade: The Black Rose. The rose that blooms at the end of the world. The absolute contrast of Utena’s white rose and the representation of the darker side of the human soul.

There is also some pretty strong visual symbolism present when students pour their heart out to Mikage during their “counselling” sessions. Placed inside a small room, more akin to a closet really, students begin a physical descent deeper and deeper below the Earth. At the height of their session, a butterfly adorns the wall, placed within a glass pane. The further the student delves into their mind, and the further down they travel, the butterfly begins a reverse metamorphosis. Whilst it takes the shape of a cocoon, the students stand on the precipice of their corruption, it is only when Mikage pushes them onward that they break and the cocoon changes into a caterpillar. The lowly caterpillar serves as a representation of a characters most core desires, the ones long forgotten to time and age. It is only when Mikage forces these to the surface that he breaks a person and regresses their humanity to thoughtless emotion and, it is at this point that their eyes lose their light. 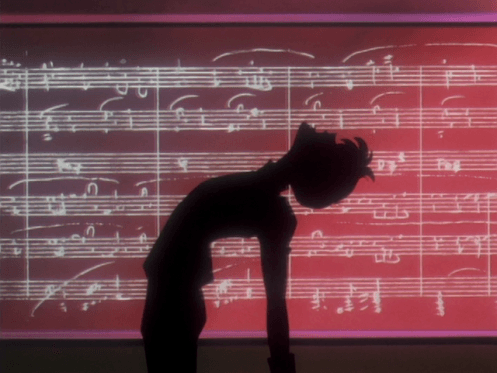 Just another one left Baroquen hearted…

Audio
The English dub of Utena continues to be…rather lackluster. Characters rarely venture out of a lulling, disinterested tone that drains any sense of drama or emotion from a scene. That being said there are a few brief moments where the voice acting takes an improvement, notably with some of the new characters. New big bad Souji Mikage, voiced by Dan Green, adds an element of skill to the cast as does the short lived character Kanae Ohtani. During her brief appearance she suffers a breakdown, noting how she finds Anthy “creepy and intolerable” a fact she notes weighs heavily on her. During these moments she actually expresses genuine emotion, sounding believable when she breaks down in tears, screaming about her conflicted emotions. Though with these moments few and far in between, the Japanese audio remains preferable. Even if you choose to listen to the English version, you may hear the Japanese vocals in the preview for episode fourteen, as no English version was ever recorded. So feel free to make your choice.

The piano also continues to remain central to the overall sound of the series. The calm, regal sound serves as a representation of the overall “royal” nature of a large portion of the cast. The instrument also persists as the bond linking Miki to both Anthy and his twin sister Kozue. “The Sunlit Garden” once again appears as the core piano tune, having a part in the creation of the second Black Rose Duelist. Abrupt bursts of piano notes are also used as an audio cue to a startling moment or sudden realisation. The power of music.

Extras
Just as with the Part I release, Part II includes a book featuring a number of extras. Episode commentary from director Kunihiko Ikuhara, art from Shichiro Kobayashi, the making of Be-Papas Studio, an interview with character designer Shinya Hasegawa, a character art gallery and more liner notes from the original laser disc release of Utena. On disc, the release also includes animated art boards set to music from the series, a four part interview with Kunihiko Ikuhara and a Utena promo from Japan circa 1997. 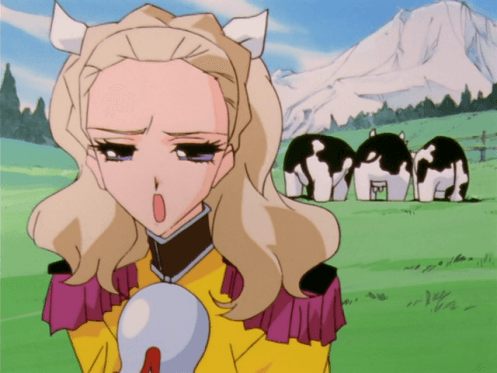 I’m not gonna use any cow puns, I’m sure you’ve herd them all

Overall
Revolutionary Girl Utena is certainly an interesting series. Again, whilst clearly a dated series, it contains some interesting concepts left buried within copius amounts of symbolism. Though the first saga dealt with twisted ideas of what love truly was, it was always from a genuinely compassionate, if misguided, heart. With the advent of the Black Rose, characters motivations became far more sinister and openly violent. Love became jealousy, passion became fury and the goal of obtaining the Rose Bride gave way to the desire to kill her. Though this far more psychological approach to relationships creates an interesting dynamic, the overall presentation of the series metes its impact to a rather large degree. Scene changes are rarely prefaced, events just kind of…happen. That being said, it was definitely an improvement to learn more about characters plot regarding the mysterious Prince. Expect to hear the word “Eternity” a lot…it’s kind of important.