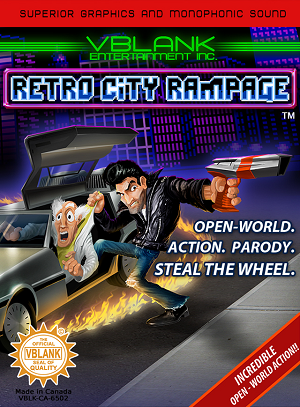 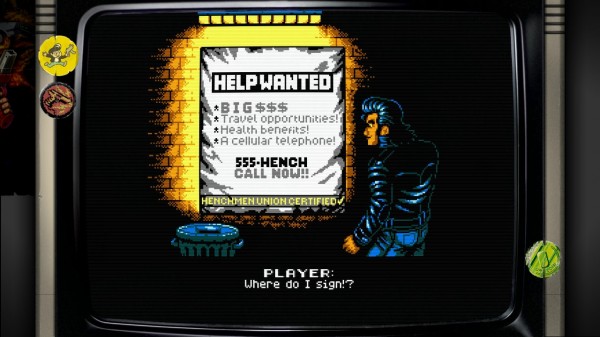 Story
The plot in Retro City Rampage is pretty forgettable. The main character, conveniently named Player, is the classic GTA hero who is a low level thug with an ever so slight conscience. The player hops into a broken port-a-potty turned time machine to avoid the cops in a bank heist gone wrong. He meets Doc Choc who becomes convinced Player comes from the future and Player’s ridiculous adventure to fix the time machine begins.

The story line quickly takes a back seat to the game. Like a Family Guy episode, the actual plot is a rough and easily forgettable structure that keeps the game’s plot together, but the real gems are the plethora of pop culture and video game references generously spooned into the game. Playing Retro City Rampage is like walking down Hollywood and going star spotting. Players are guaranteed to bump into at least one reference they understand and a few more obscure references too. 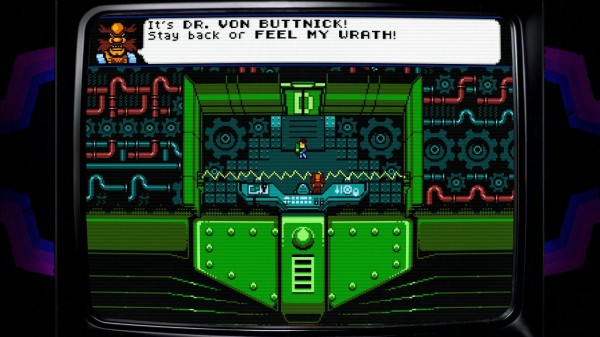 Gameplay
It is extremely obvious that Retro City Rampage started its life as a port of Grand Theft Auto 3. It boasts a large open world that just begs to be explored. The stores are tongue in cheek parodies that would make Rockstar proud. As a Canadian, I even spotted a few subtly Canadian references. The city has taken several cues from developer Brian Provinciano’s base of operations in Vancouver, British Columbia, Canada.

The game itself is broken down into three modes. The free roam mode strips out all the missions and allows the player to roam around the city as either the protagonist or special characters unlocked during the course of the main game. Most of these characters are from iconic indie games like Minecraft and Super Meat Boy. The arcade challenge provides players an opportunity to compete on the leaderboards for high scores. 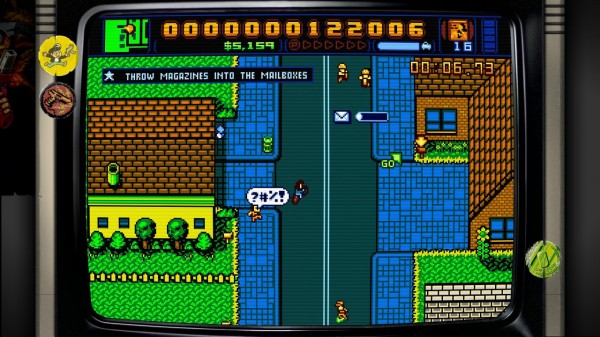 The main attraction of the game is the story mode. There are 62 missions to complete and several on the side distractions to optionally complete. There are a wide variety of weapons to wreak havoc with. The inventory system becomes a little irritating to handle as the right bumper is used to cycle through each weapon. After a while, the inventory becomes rather full. I found myself trying to jump around and dodging enemies while rapidly tapping the inventory button trying to find the weapon I needed for the situation.

The missions cover all the basics from car reappropriations, assassinations, and the dreaded tail missions to a few retro throw backs like the paper boy mission and Metal Gear Solid styled sneaking missions. Some of the missions can become a little tedious, as many boil down to drive from point A to B, kill a lot of people without dying, finish the missions or here is a special vehicle, go on a huge killing spree while trying to get the highest score possible. The checkpoints are placed at reasonable points and failure results in some good advice on completing the mission. 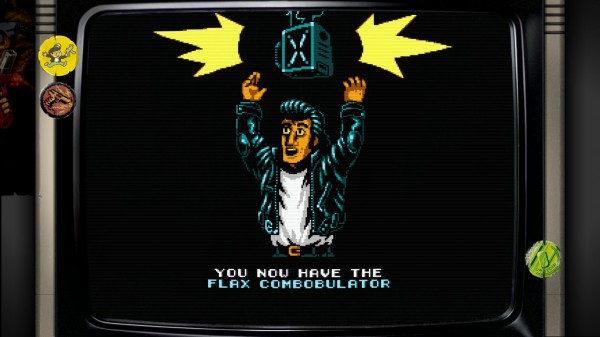 The controls are excellent as they are responsive and are well thought out. The game provides a good tutorial for controlling the game that is built into the story. Driving controls can be set to old school type controls or a simplified point in the direction and go type controls. Those who are too young to remember the NES era of gaming will not encounter too much of a struggle to transition to the top down and 2d perspectives of the game. The only time I ever struggled with the controls was aiming my stomps. I found the hit box could be a little small, especially when my target was moving around. However, the game provides a large bonus reward for the skill required to chain stomps together.

Visuals
Retro City Rampage is presented in classic 8-bit NES graphics. It stays true to form with all the classic styled screen effects. The only modern concession the game makes is the possibility to play the game in widescreen format instead of having borders on the window. There are several border styles that can be selected including the classic arcade cabinet look. 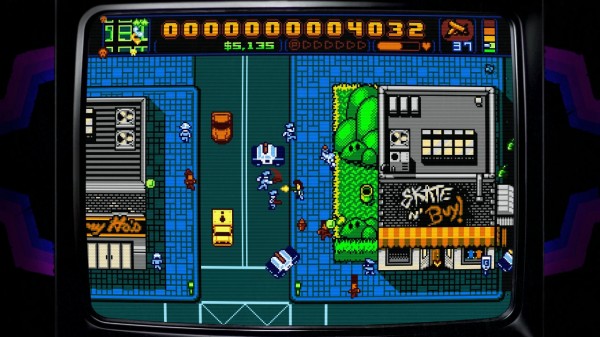 Audio
Three major chiptune artists where brought on board to provide the soundtrack to the game. Freaky DNA, virt, and Norrin Radd have put together a great soundtrack that blends in well with the 8-bit nature of the game. As an added bonus, a free demo mix tape is available for free download on the Retro City Rampage website alongside the full soundtrack in vinyl and MP3 formats. The sound effects do well, never getting annoying or repetitive but never manage to hit a wow this is amazing moment either. They simply work.
Overall
Overall, Retro City Rampage is an excellent game that stumbles on its repetitiveness and its constant need to parody everything. It provides an excellent soundtrack, strong controls, and perfect replication of 8-bit graphics from the NES. However it struggles to come into its own as a video game and escape being an 8-bit Grand Theft Auto parody. For 800MSp/$14.99 USD, I can easily recommend the game for fans of the GTA style games and those looking for a solid retro throwback game, but for those not particularly interested in either Retro City Rampage may best saved for a sale price purchase.