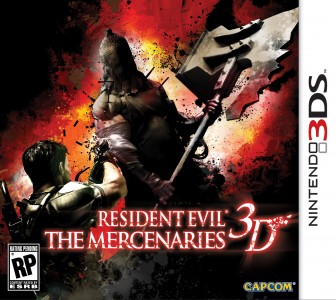 Since the launch of the 3DS, Resident Evil: The Mercenaries 3D has been without a doubt one of the most anticipated titles for the handheld. This game takes “The Mercenaries” mode that we have seen included as a bonus in the most recent Resident Evil titles and attempts to offer a more complete experience as it’s own release. While there are a few slips along the way, Mercs 3D is still one of the most exciting experiences on the 3DS to date that is sure to attract those who are craving more of the classic series. The question is, just how well does this title stand on it’s own? Here is my review for Resident Evil: The Mercenaries 3D. 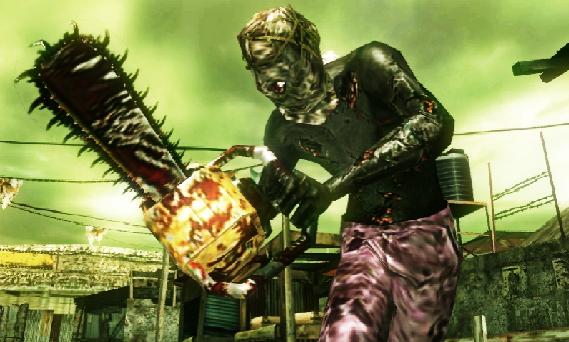 Gameplay
I normally start off most reviews talking about a story mode. Sadly, The Mercs 3D has no story whatsoever, but for this type of game it really isn’t needed as I couldn’t imagine how shooting through hordes of Majini and other evils from the RE series could possibly be told with a proper narrative. The Mercenaries 3D is a bit of a mix between the The Mercs modes from Resident Evil 4 & 5, as many of the enemies and locations are back from both titles along with some of the more familiar characters from the franchise. Although I enjoyed seeing Rebecca, Chris, Jill, Wesker, and Barry all together yet again, I did feel a bit disappointed to see a lack of Leon Kennedy, Sheva, and Ada Wong, who are mysteriously absent from the roster of this game even though each played a significant role in the most recent Resident Evil titles. This is just a small personal gripe though and thankfully Hunk, Krauser, and Claire all round off the roster quite nicely and separate this title from the console versions of Mercs.

Now if you have never had a chance to play The Mercenaries mode, the object of the game is to simply stay alive as long as possible while taking down as many enemies as you can before the time ends. The same concept applies to Mercs 3D. Once you select your character of choice, you then set off on one of thirty different “missions” in the game. The first few sets are made up of various tutorials to get the player used to the portable feel of the game. After those are done the game completely takes off and becomes progressively harder with the same core Mercs engine that returning players will feel right at home with. 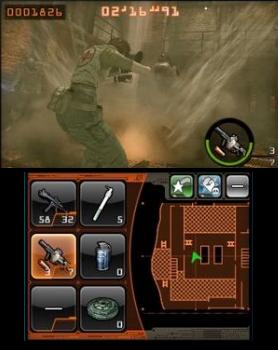 My biggest worry about this handheld version was the control layout as honestly the 3DS’ scheme is nowhere near as advanced as an Xbox 360 or PS3 controller. Thankfully though, this is where The Mercenaries 3D shines the brightest as not only are the controls easy to use, they can also be slightly customized to the player’s liking. Shoulder buttons are used aim, Y to shoot, and the remaining face buttons are used for actions such as reloading, taunting, or healing on the fly. The slide pad works exceptionally well and makes the whole experience rival that of it’s console brethren as not once did I encounter any hiccups or problems trying to turn or move my character in even the most hectic of situations. To add to this, the bottom screen is fully utilized throughout the experience as the player’s inventory. Just with a tap of the stylus, a player can quickly reload, change weapons, or heal, pushing the action at the forefront and making item juggling a thing of the past.

Each character have their own techniques, weapons, and melees, making each feel somewhat different from the next. Once an enemy is stunned, a melee can be executed to either finish off or further damage a foe. These attacks don’t just look nice as they actually play into the strategy of the game as a small time bonus is rewarded for performing one of these special animation sequences. Combos are also a very important part of gameplay as killing enemies one right after the other is rewarded with a substantial bonus at the end of a chain that can play a huge difference into the final grade received at the end of a level. While all this may sound rather familiar to the typical Mercs player of the past, the new addition of skills make this version of the game stand on it’s own. 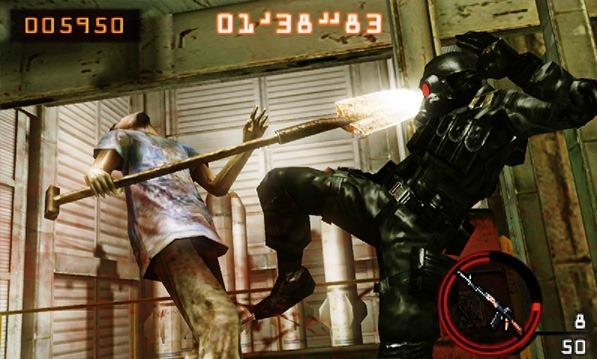 After performing certain objectives within the game, skills become available that give different boosts in offense and defense such as strengthening damage given to certain enemies, enhancing control of various weapons, and upping the player’s offensive techniques when health reaches a critical point, just to name a few. Up to three skills can be equipped at one time and can play a huge role into the final result of a battle as most of these effects are noticeable and add yet another layer of strategy to getting the highest score possible.

While this may be a fantastic version of the once bonus game, there are still a few flaws in gameplay that hold Mercs 3D back from reaching it’s true potential. One of my biggest complaints is the method used to escape an enemy. When an enemy grabs onto the player, you are forced to press the button that is displayed on the screen…and then another….and then another. It sounds simple enough, but if you miss just one entry you are forced to repeat the same process. Every single time I was grabbed, this caught me off guard and my instincts went to the old button mashing formula (which worked much better in my opinion), making this new way of escaping more of a frustrating chore that instantly takes the player right out of the hectic action and into a tedious mini-game of sorts.

Enemy AI can also be a bit of a problem at times as some enemies seem to just stand it one place, waiting to meet their doom. Other moments seen a group of angry Majini running up against a wall or simply attacking the air. I know that they are infected, but now the virus has apparently spread to their brains. I will say however that the AI is usually smart enough to know to come after the player and provide a challenge, but I certainly feel not enough polish was given compared to the somewhat smarter opponents found in the console versions of the game. 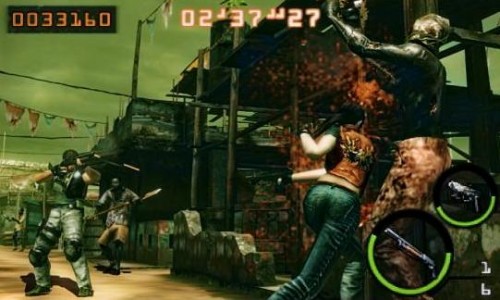 All of that aside, one of the main purposes of any score attack style game is re-playability. It should take most players around 4-5 hours to complete every mission found within the game, but thanks to online co-op and the many unlockable medals that can be obtained, Resident Evil: The Mercenaries 3D is extremely addictive and a blast to play with a friend or any of the random players online. The lack of online leaderboards is a bit puzzling as such a simple feature could have been a necessity and it feels criminal seeing how you can’t share that high score obtained with the world. Even without leaderboards, Resident Evil: The Mercenaries 3D is still worthy of a few replays and even though the content included is small, this 3DS release is certainly the most fun I have had with the handheld to date online.

Graphics/Audio
Resident Evil: The Mercenaries 3D is probably the best looking game we have seen on the 3DS so far and is truly a mascot for showing off just what kind of visuals the system can truly display. Each model looks fantastic and you can easily see all the fine details applied with each attire. Enemies are a bit of a mixed bag though as up close, each look fantastic and are animated wonderfully. At a distance however, enemy models run at maybe 4-5 FPS at best and look extremely rough. While this game is in 3D and that feature adds to the immersion of the experience, I never felt too much of a difference to actually keep the 3D on the whole time as the final result is a bit subtle and feels a bit tacked on. Overall though, there is no denying that this title may be the best showing of a character model to date and the familiar environments found within also do a fantastic job of making the player feel right at home in the Resident Evil universe. 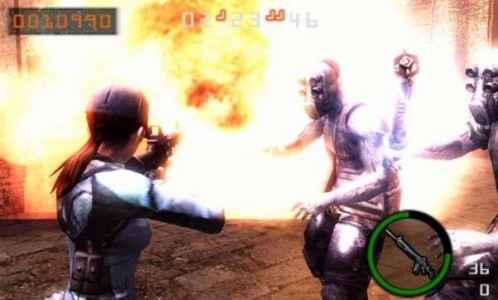 Music is yet another fine feature of the game as much of the soundtrack is ripped straight from the Mercs mode from Resident Evil 5. Adding to this, the music can now change at an instant whenever your time is running out or when a larger boss like enemy presents itself, adding some much needed excitement to the scene almost instantly. There isn’t a whole lot to say about the actual voicework as there isn’t a whole lot here, but most of the taunts and screams are done fairly well and while most were ripped from Resident Evil 5, each dab of voicework works miles into giving each character a sense of individuality.

Overall
To be honest, I went from wanting to play Mercenaries 3D to almost a complete loss of interest whenever I discovered that save data was unable to be deleted. Oddly enough, once I actually got to playing I became increasingly addicted to the whole experience given and at the moment I would say this may be the finest version of the game to date. Models look stunning (at least from close up) and each area captures that Resident Evil atmosphere that fans will instantly cling to. Controls are all responsive and work well and the inventory system on the touch screen does wonders to make the game more enjoyable, keeping everything focused on the chaotic combat. There are quite a few design choices that keep the game from reaching it’s true potential however and the lack of content for a full cartridge release is present and can make this mini-game of sorts feel like it could have simply been added to the upcoming Revelations (which is set to release a year from now). All that aside though, I still believe that Resident Evil: The Mercenaries 3D is a fantastic start for the series on the 3DS and is a nice addition to any fan’s library as it almost redefines the term “pick up and play”.

I Give Resident Evil: The Mercenaries 3D: