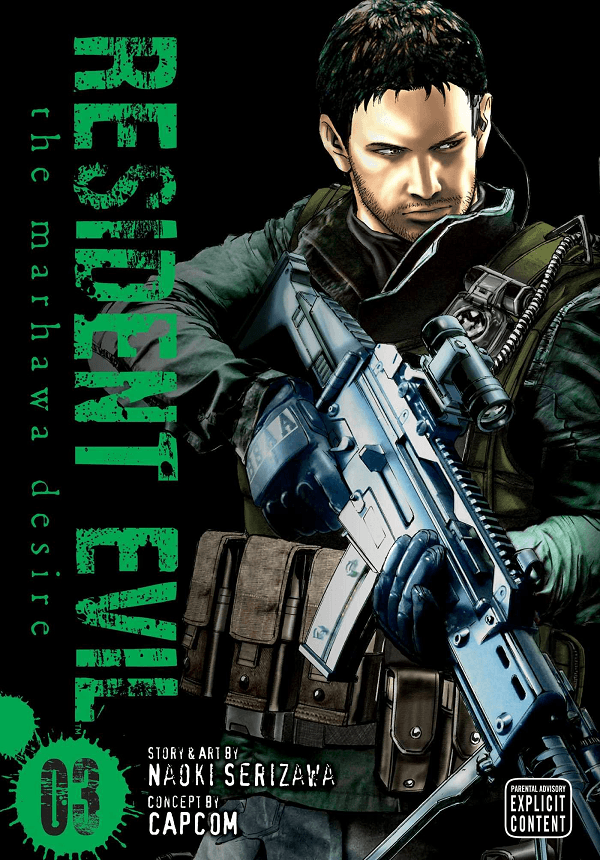 Overview
Marhawa Academy has long been seen as the most prestigious school in Asia and under the tutelage of Mother Gracia and her teachers, the remote campus has seemed to thrive. That is until a student turns into a zombie and Gracia calls in Doug Wright to come investigate the case and put an end to it quietly. As things continued to go out of control and the mystery deepened, Doug’s nephew Ricky was left facing off against a cloaked abomination at the end of volume 2. Now that Resident Evil: The Marhawa Desire Volume 3 has been released where does the story go from here?

Story
Resident Evil: The Marhawa Desire Volume 3 picks up immediately where the second volume ended, with Ricky’s uncle Doug severely wounded and one of the school’s security members nearly dead. Things quickly turn from bad to worse as the deadly tentacle creature resembling the long thought dead Nanan stops her one-sided attack on the three and flees, but not before forcing a type of mist down the wounded security guard’s mouth and forcing him to transform into a zombie.

After Ricky finishes off the guard and, with the help of Gracia and the rest of the staff, bring Doug back into the school for medical treatment. With Gracia finally realizing that this is something the school cannot handle on their own, Ricky heads off to find Bindi only for one of the biggest mysteries in the manga series so far to be revealed.

For the most part, Resident Evil: The Marhawa Desire has been a fairly evenly paced story that has balanced action with answers slow to come despite the mysteries building up around the cast but in volume 3 things shift a bit as the story slows to a crawl during the first half of the book but also manages to answer numerous questions about what is happening. The key focus in this part is Bindi and how she has had to deal with Mother Gracia’s attempts to cover everything up, including the bullying that happened to her friend Nanan and the fateful events that led up to her death.

All of this is told through an overly long flashback that fleshes out Bindi’s reasoning while painting a dark picture of the lengths that Gracia would go to in order to keep the academy’s image pristine. However at this point readers already know what Gracia is capable of hiding and this leaves the following events a bit rushed as all hell breaks loose in the second half of the volume.

With the cat out of the bag, Bindi’s plan goes into motion as a batch of students are instantly transformed into zombies due to Nanan’s mist and begin attacking the rest of the students. With Ricky being the only capable person with a firearm, havoc reigns throughout the school as students are slaughtered by people they once knew. Many resort to suicide or betrayal in order to escape but their reprieves are short lived as the body count continues to mount page by page.

This means that there is plenty of action to be found, but it also is one-sided as few students are even trying to fight back and unfortunately the one character that does try and stand out lasts less than a chapter with her death driving Ricky even further into despair. The issue with this not only means that there are very few survivors left and Mother Gracia is never given a chance for redemption or growth as the author makes wipes the cast almost completely clean in order to shine the spotlight on the more familiar faces that appear at the end of the volume.

Artwork
Those who have been following the manga series so far should know that Naoki Serizawa’s art is rather excellent when it comes to showing off the gore and transformations of zombies. In this volume we see a pair of new creatures take the stage featuring detailed looking limbs and muscles that are used to tear through humans. That being said, it does seem that the gore is a bit scaled back this time around as there is far more blood splatter to be seen than anything else as the zombies tear through the academy. This is also thanks to fairly limited resistance of the student body giving readers very few zombie kills though the ending of this volume does allude to that being a major factor in the next volume.

Extra Content
Similar to the last volume, Resident Evil: The Marhawa Desire Volume 3 begins with three color pages, two of which are used for a two-page spread of one of the more bloody injuries in the volume. This is then followed by a four page summary describing the events that have occurred in the first two volumes featuring colors mimicking the cover.

Overall
Resident Evil: The Marhawa Desire Volume 3 stumbles a bit as it shifts the focus from revealing mysteries to unleashing chaos on the unprepared students of the doomed academy. While a key mystery is solved, there is still more to be revealed, especially since Bindi’s actual source is still missing all while unfortunately eliminating most of the development that could have come from the already introduced cast. With high quality artwork and plenty of focus on nasty death and violence, Volume 3 is still a worthy read despite the way the cast has been diminished in favor of introducing a long-awaited familiar face to the action.