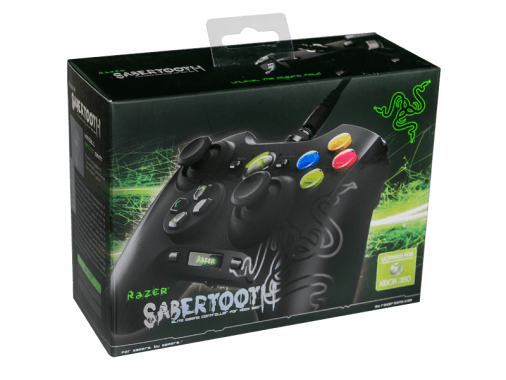 The Razer Sabertooth is the follow up to Razer’s first foray into the controller market, the Razer Onza. The Sabertooth maintains the Onza’s shell, but changes the position of the two macro buttons on the shoulders of the controller and adds two rocker switches that provide a total of four extra macro buttons on the bottom of the controller. Additionally the tension thumb sticks have been removed in favour of Xbox style thumb sticks. The Start and Select buttons have been moved to be near the Xbox Home button, the shape of the triggers, and the height of the four face buttons have been raised to better replicate the original Xbox 360 controller. The D-Pad has been changed to a Playstation 3 style D-Pad.  A removable cable has been added for easier transportation. The Sabertooth also sports an OLED screen with two buttons surrounding it that manages all the programmable features on the controller. 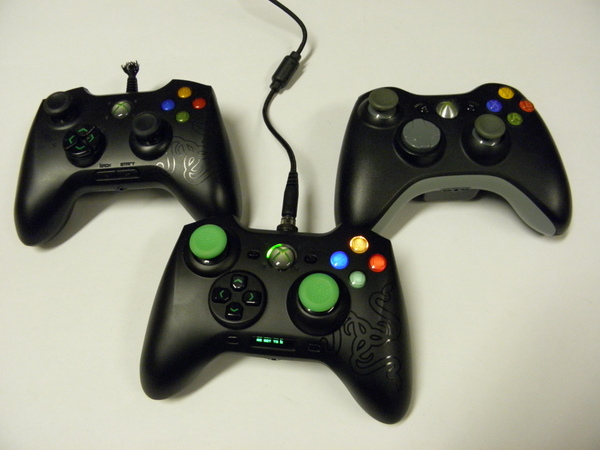 The Razer Onza Tournament Edition has been pushed down to a mid-tier level with the introduction of the Sabertooth. Early in the Onza’s lifespan, it was plagued with long term durability issues. Razer gone to great lengths to highlight the improved durability. The removable cable is one of the more noticeable changes to the controller. My previous Onzas had a tendency to bend severely at the end of the rubber stress relief. With the new cabling, the Sabertooth’s cable curves out gently, putting less stress on the cabling. Razer points out that they have improved the materials used in the Sabertooth over the Onza. Hopefully, this should result in better long term survival for the Razer Sabertooth. 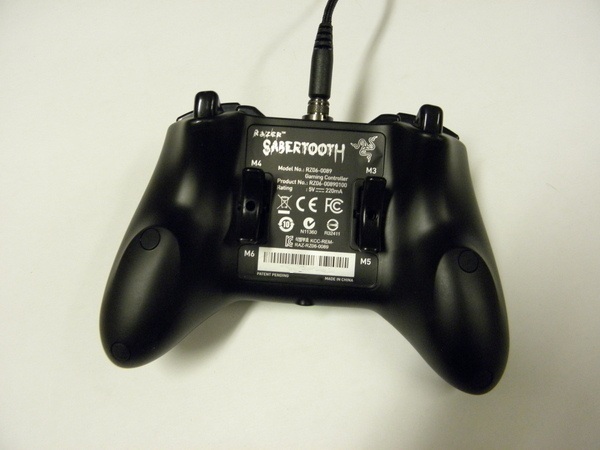 The Razer Onza is packed into its box with a travel case. Inside the travel case is the controller, the removable cable, two Razer green thumbstick cap, two rubber pieces, and a small screwdriver. The green thumbstick caps are made out a silicone type material that greatly improves on the grip of the thumb sticks. As a person who suffers from sweaty hands, I really appreciated this small touch. The small screwdriver and the two rubber pieces allow the rocker macro buttons to be completely removed from the controller and covered up to keep debris out. This is an excellent option for those who find the macro triggers intrusive.

The wiring is a thick braided cable that does not tangle easily. Razer has provided a generous amount of cabling with the Sabertooth, so it will reach the couch easily. The cabling has an easily detached plug on the end found in wired Xbox controllers that will cut the cable instead of yanking the Xbox 360 out of the media centre or where ever it is stored. The short piece of cable that includes the USB plug and the safety plug is the same as the Onza. 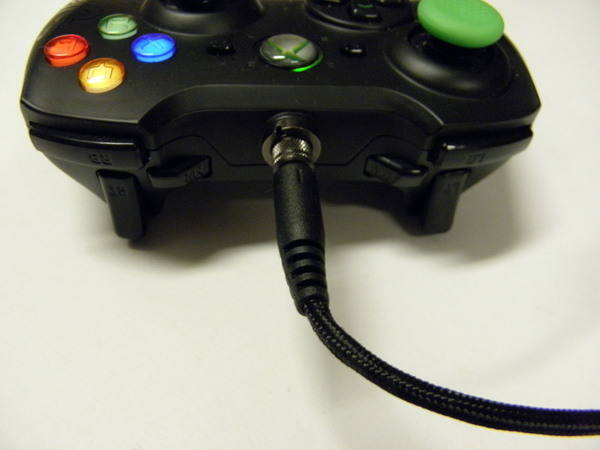 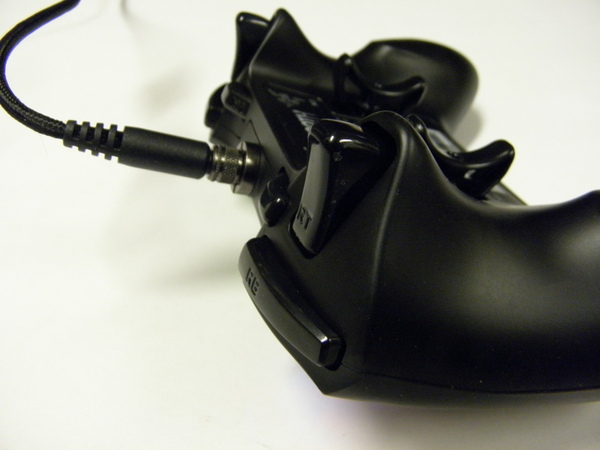 The face buttons are about the same height as the stock Xbox 360 buttons, however, they retain the same mouse button like feel as the Onza’s. As a result, the travel distance required to actuate the button is barely anything. This will shave a split second off the button’s response time. For the average person, this really won’t change much, but for a twitchy game like Call of Duty, a split second could be the matter of life and death. The Start and Select buttons use the same mouse button click. However they are about half the size of the stock buttons and sit much more aggressive height on the controller. I found locating the Start and Select buttons by touch was a little harder and less natural feeling than the stock controller.

The D-Pad is an absolute work of beauty. Razer redesigned the D-Pad to look more like a Playstation styled D-Pad. I was never a huge fan of the Onza’s D-Pad. I always found it clunky when handling diagonal directions. The Sabertooth’s D-Pad to be responsible and incredibly comfortable to use.  Some things on a controller are best not messed with, and the D-Pad is one of them. 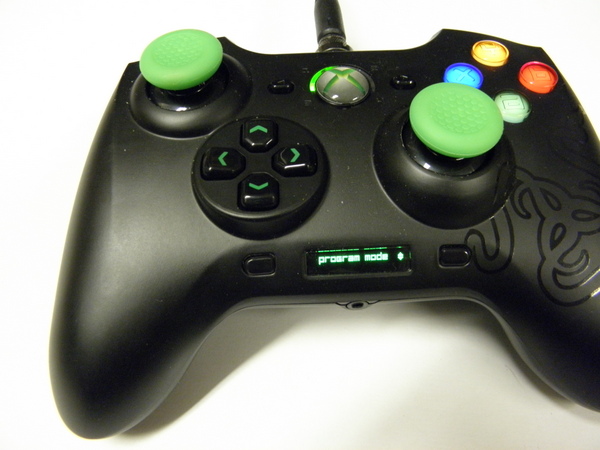 There are a total of six macro buttons spread between two places on the Sabertooth. M1 and M2 are located in between and towards the centre of the triggers and shoulder buttons. Razer said this allows for more accurate presses of the button compared to the Onza. I found this to be absolutely true. Unfortunately, I have extremely small hands. For reference, I wear extra small or really large children’s gloves normally. So with a normal grip, I could hit the M1 and M2 buttons with the very tip of my fingers. With a slightly modified grip, I could press the buttons a little easier. For 99% of the male population, there should be no issues, but people with smaller hands may want to think about getting some hands on time with the controller if the shoulder macro buttons are extremely important to them. 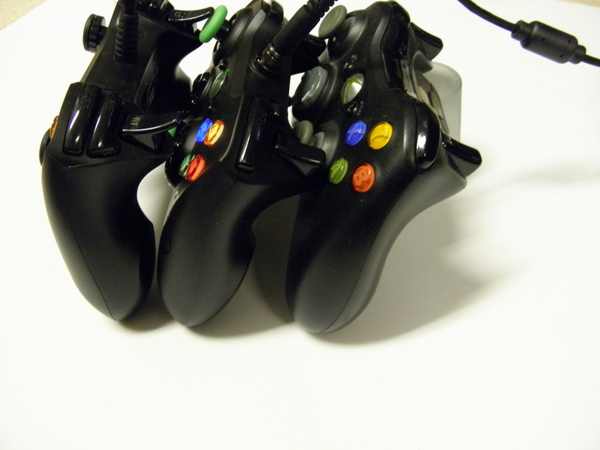 The two rocker macro triggers on the bottom of the controller has quickly earned its way as my favourite part of the Sabertooth controller. The motion to pull the rocker towards the user is an extremely natural motion, excellent for buttons that will be used a lot in a game. Flicking the middle finger outwards is a very quick motion, but I found it was best left macroed to buttons that were used occasionally. Using the six macro keys, I found it completely possible to almost never have to leave the thumb sticks in FPS games. This provided a definite split second advantage and probably will assist a lot of players in such tactics like drop shots. In practice, the triggers require a reasonable amount of force to actuate and have a nice click to them. I had a few occasions where I accidently pressed one of the macro triggers when I was surprised and naturally tensed up. In my hours of testing the controller, I can literally count the times it happened on one hand.

The Razer Sabertooth has an green OLED screen that allows the user to turn off and on lighting andvibration functions. Additionally, the controller’s macro buttons and thumb stick sensitivity can be programmed through this screen. The Sabertooth saves two separate profiles, allowing for programming one profile for say FPS games and the other for games requiring a more traditional button and stick configuration. There are two buttons flanking the OLED screen. The one of the left swaps between profiles while the right handles the programming functions. Learning how to program this did require the help of the instruction manual. Once I learned the basics, I was able to handle the programming with ease. One problem to note is that as an Onza owner, the program and profile buttons are located where the Start and Select buttons were on the Onza. During my initial familiarization period with the Sabertooth, I found myself hitting these buttons then wondering why my macro buttons were completely changed or why my controller suddenly became unresponsive. 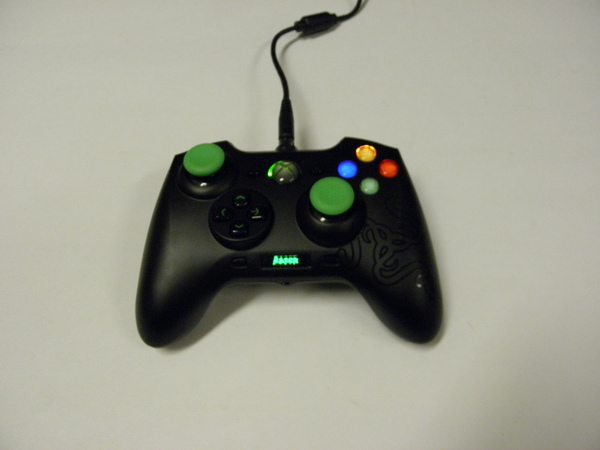 The controller is compatible with both the Xbox 360 and Windows PC. There are no drivers to install for the Windows PC. I plugged it into my computer running Windows 7 and the computer immediately recognized the controller, installed the drivers automatically, and I was playing games on Steam Big Picture in no time.

The Razer Sabertooth is a fantastic controller. Razer seems to have taken user response about the Onza and created a top of the line controller. It is definitely oriented towards the FPS crowd, but any heavy Xbox 360 user will appreciate the extra features of the Sabertooth. There is a bit of a learning curve with this controller, but those who tough it out will be rewarded. At $79.99, is definitely an extremely expensive controller for the occasional Xbox 360 gamer. A generous amount of pack-ins like the travel case and thumb stick covers provide some extra value for the price. I highly recommend the Razer Sabertooth to any hard core gamer who is willing to deal with the wires. For current Onza owners, the decision to upgrade is a little murkier. If you are completely in love with the tensioned sticks and the Onza’s triggers, you may want to hold out on an upgrade. However, if you found the Onza to be too much of a departure from the classic Xbox 360 controller, the Razer Sabertooth will bring you the best of both worlds.