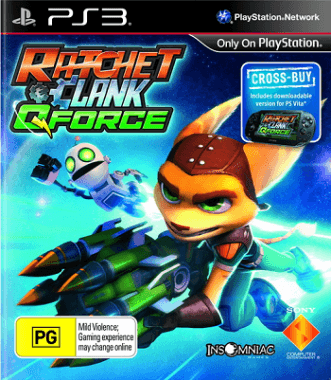 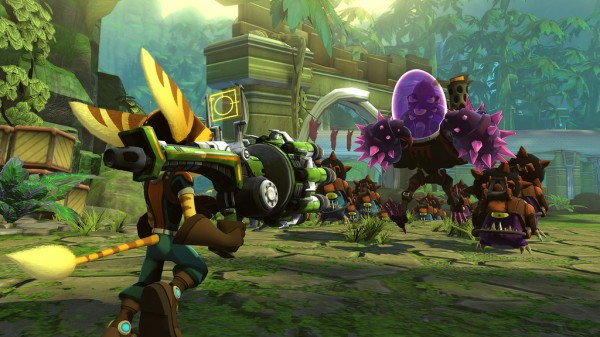 Story
Unlike the other Ratchet and Clank games, the story of QForce isn’t as fleshed out. With that said, there is a story behind the game. Captain Qwark is now a retired Galatic President, bored as there is no danger in the galaxy. Suddenly, the QForce picks up some danger in a far off planet, recalling Ratchet, Clank and Captain Qwark back into action as a new alien force invades the galaxy. It is a basic story but it isn’t terrible. It’s quirky and fun. Short as well, but, considering the price of the game, it is to be expected. 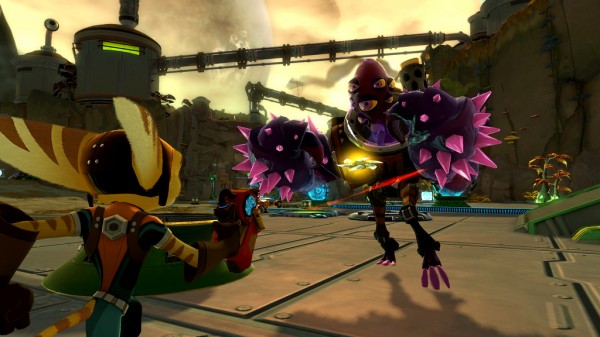 Gameplay
Ratchet and Clank: QForce is a mix of the classic Ratchet and Clank platforming formula and tower defence games. Each map is divided into several sections, but mainly consists of the player’s base, nodes and the Planetary Defence System. At the player’s base, generators must be defended from invading forces. At the same time, the player must execute a one-man (or machine) assault to activate key nodes, which in turn activate the Planetary Defence System. Once that is activated, the player must repel one final assault, which would test the patience of any commander.

That is how each level goes. Build up a base, activate nodes and activate the Planetary Defence System. With that said, there is opportunity to explore. Each level is littered with five gold bolts to find, usually found in secret sections. This exploration is how one finds bolts for building a defence system for the player’s base. The combination of these two elements is great, but they will also test your patience. The tower defence mechanic will require some time to get use to, considering the previous entries of Ratchet and Clank. While not occurring too often to pull one’s hair out, the flow of one’s assault breaks as soon as enemy drop ships approach the base. Not a great thing, especially if the progress into the opposition’s base is quite far in.

This will be a problem for some. Ratchet and Clank, at its core, promotes exploration. Yes, QForce does have opportunities to explore, even required to unlock bonuses. With that said, people might find the defending side of the game quite boring. The pricing for some of the weapons is a factor in that. The most basic turret, the Pyro Cannon, costs 1250 bolts. The bolts provided to the player upon beginning the level only allow one to be affordable, forcing the player to choose which flank to protect first. Add in other elements, such as barriers, mines and repairing generators, resources are going to be spread thin quite quickly. A recent patch reduced the prices for some of the weapons, which is a good step. The character must be the last resort, not the defensive front line. 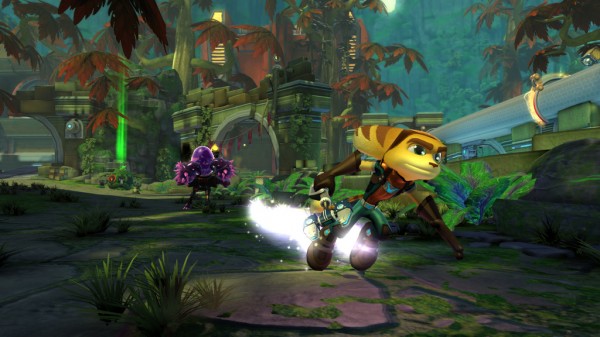 Weapons are treated differently this time around. In the older games, weapons would be bought with bolts at a vendor on each planet. Bolts do return, but their purpose is in base building. Weapons are retrieved in weapon pods scattered throughout the level. Only a selection of weapons is available in each weapon pod, giving some freedom to strategise the player’s assault. It also means the weapons one chooses are an absolutely must use. Often, I have switched between various weapons in order to defeat my enemies quickly. Gadgets such as the Hoverboots are also a must, making no weapon or gadget a waste of time. The weapon levels return, although they are capped to level 3 (a recent patch extended the cap to level 5). Remember this: the weapons do not carry over into one’s inventory each time a one finishes a level. The weapon pods occur in each level and they are only available for that playthrough.

Throughout the game, players will have challenges to complete, which are rewarded with medals. The common challenge is to complete the level. Other challenges include making sure the generators are in tact and completing the level in a certain time. More medals equates to promotion within the QForce and access to more abilities. Multiplayer is also available, both locally and online. One can bring a friend along in campaign or compete against one another in the competitive mode. 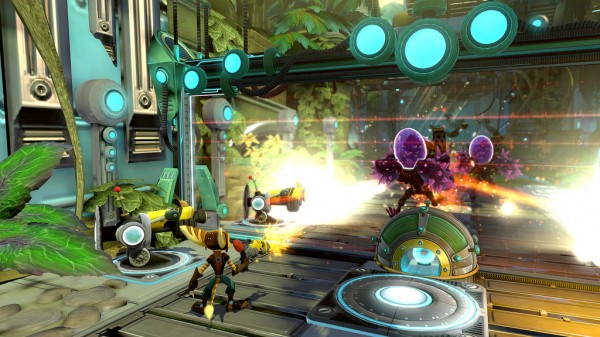 Visuals and Audio
The visuals are based on the same graphics engine that was used in last year’s Ratchet and Clank’s title Ratchet and Clank, All 4 One. This time around, the visuals are more refined but don’t expect any super high textures. Colours are in abundance, creating a bright and vibrant world. The enemy models are imaginative and there is a variety of enemies to fight against. The level design is not confusing or convoluted, despite the size of each map.

The sound design is quite good in QForce. The soundtrack will not be memorable, but that isn’t to say it is a well put soundtrack. Tracks fit the situation, whether it is just chilling on the Starship Phoenix II or the environment in which the player defends their base and assaults the PDS. Dialogue is also great. This came down to the writing. The writers bring back the hilarious dialogue that is expected in a Ratchet and Clank game, adding chemistry between the playable characters.

Overall
Despite a few flaws, Ratchet and Clank QForce is definitely worth looking at. The platforming and tower defense elements do complement each other but does require some time to get use to and it may make some players feel tedious with the constant management between defence and attack. The story is basic but fun thanks to the quirkiness of Ratchet and Clank. The visuals are nice and the audio is great as well. With the game at AU$24.95 and a free Vita version, which will see a release next month, this is definitely a game worth purchasing.