Overview
There has been a lack of tactical RPGs over the last couple of years. The last one I can remember enjoying was Fire Emblem Radiant Dawn for the Wii which came out in 2006, and more recently Pokemon Conquest on the DS. You’re probably noticing a theme here… these 2 games are Nintendo exclusives. Fear not for Eastasiasoft has you covered with the the PlayStation 3 exclusive Rainbow Moon. 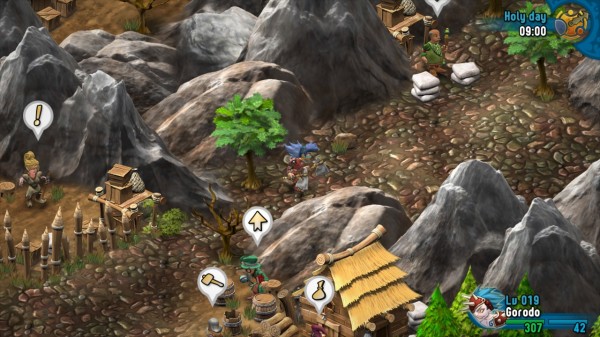 Story
The story of Rainbow Moon is the typical JRPG where a main character goes to do something, but then gets thrown into some crazy adventure and must save the world from evil. In Rainbow Moon the original objective of the the hero was to fight his rival, as they have done on an annual basis. This time around the hero is searching through a mysterious forest for his rival when all of a sudden his rival launches a sneak attack, driving him into a portal that opened up, swallowing him inside of it. Now the hero must embark on an epic quest to try and make his way back home.

The story itself isn’t the most original in the world but it is established and presented well. Everything was presented simply and never confused me as I made my way through the title, so while it may not have been the best in the world it was good one nonetheless. 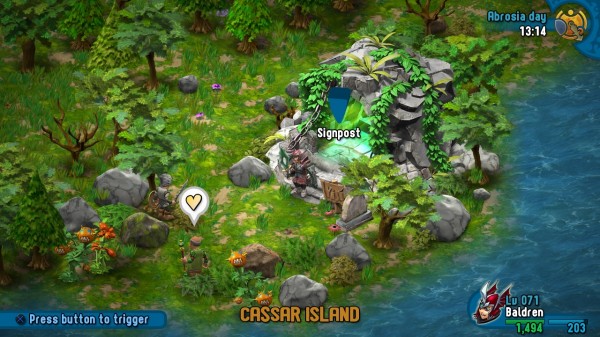 Visuals
The visuals feel like a cross between Super Mario RPG and like something you would see in an anime. The characters and enemies have 3D character models, while the levels are mostly displayed as a 2D plane. The colors used in the game were very vibrant and varied which is a nice change of pace from the large amount of gritty dark colors that many games have used this year even the darker colors look bright and cheerful. The visuals of this game may even cheer up people who have had a bad day.

Audio
There may not be any real dialogue spoken with the exception of the Narrator at the beginning of the game but this is a good thing. The voice over they do have is very annoying. Every NPC only says 2 phrases and almost all of them have a high pitched whiny voice. Which gets really bad when you have to talk to them frequently, I’m looking at you healer. While the character dialogue gets old and tiresome the music does not.

The music is quite pleasant, and changes when you enter a new area, such as a dungeon, or a new part of the world. So the music never becomes over bearing to the point where you want to cut your ears off. The sound effects are well done with nothing sounding out of place, and the sounds won’t cause your ears. 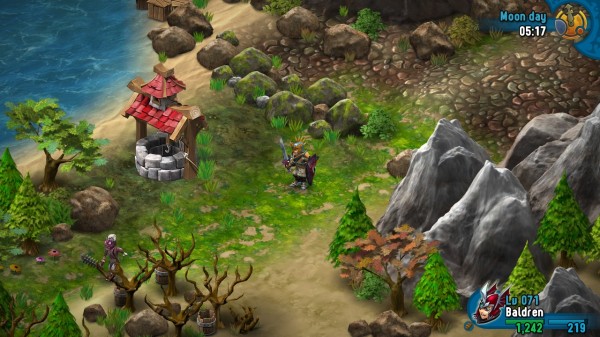 Gameplay
The gameplay is a classic tactics based RPG but with a bit of a twist. Where traditional tactics based RPG’s require you to press a button to confirm your choice, Rainbow Moon does not. When you have selected what action you want to do you use the left analog stick to preform that action. When the action is performed the selection does reset, which can get annoying if someone is not paying attention. The analog stick controllers are also very sensitive, which does take a bit to get use to, but doesn’t cause too many issues.

In addition to gaining levels you can increase your characters stats by collecting moon pearls. In order to collect moon pearls you need to defeat enemies, but the moon pearl goes to the character that kills the enemies. Stats can cost cost somewhere 1 to 27 moon pearls depending on the character. The more enemies in a battle the more pearls can be obtained. The higher the level of the enemies the more moon pearls you will receive as well. The combat system was very refreshing and a nice change of pace. 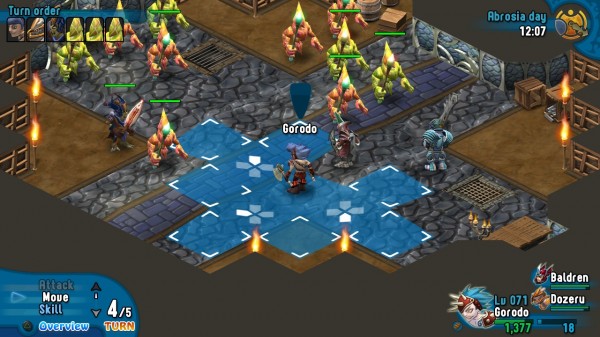 Overall
Rainbow Moon is a fantastic title that will not disappoint TRPG fans. Rainbow Moon will keep you busy for anywhere between 25 to 100 hours, and with its price tag it’s a bargain for that amount of gameplay. Players can’t go wrong with this title.