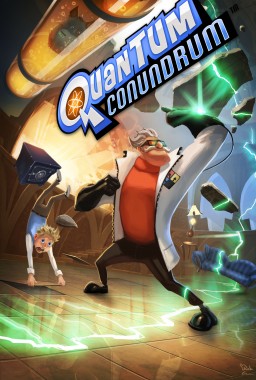 The success of Valve’s first person puzzler series, Portal, is, no doubt, what led to a new release in the expanding, genre-mashing market first envisioned on the Source engine. Developed by Airtight Games, Quantum Conundrum puts a quirky, child-like twist on the Portal formula. Does the downloadable initiate manage to surpass the charm of its predecessors, or does it force players into a new dimension of agonizing frustration? 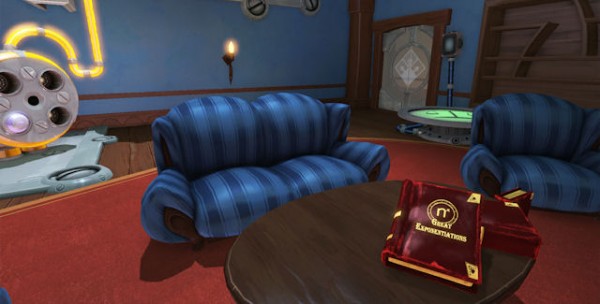 The story of Quantum Conundrum is notable through its absence. You are your crazy genius uncle’s nephew, and as your mother dumps you off at his mansion a dimensional rift tears through the expensive piece of real estate and your Uncle disappears into a mysterious pocket dimension, with memory loss impeding him from remembering just how it happened. As such, it’s up to you to travel through the progressively collapsing mansion to turn on generators that will allow him to return to our world. The mystery of it all is dragged out over the seven to eight hour game, and therefore much of the enigma vanishes – there’s none of the depth here that you would find while exploring the shattered halls of Aperture Science. The basic story is merely there as an excuse to put you through the rooms upon rooms of dimension-twisting puzzles.

That’s excusable though because, for the most part, the puzzles are clever challenges that will involve your brain just as much as a quick reaction time. You see, Uncle’s been working on a dimension shifting glove, and you’re going to need it if you plan on getting through the mansion in one piece. The glove keeps the wearer within his own dimension, so while everything around you changes, you will stay the same. 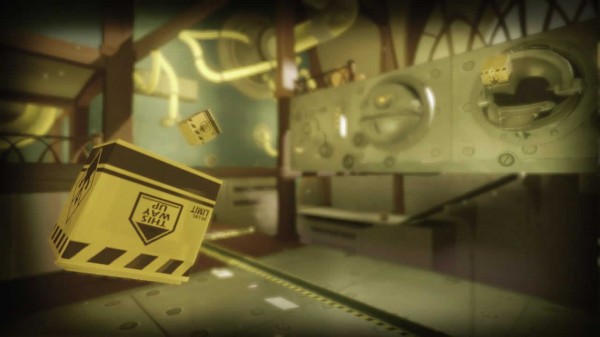 The first two dimensional-shifts you’ll get achieve are access to the fluffy dimension, wherein everything is as light as a feather, allowing you to lift heavy objects, and the heavy dimension, in which everything’s density becomes far greater, making the lightest of objects heavier than a baby elephant (yes, I managed to fit a baby elephant simile into a game review, be impressed). Using these shifts you’ll flip levers, jump on springboards, make cardboard boxes heavy enough to push down on weight-sensitive buttons, use fans to blow light objects into walls to create stairs, and so on.

You’ll eventually gain the ability to slow down time, which will allow you to jump onto flying objects to traverse chasms, play catch with yourself (it’s lonely being a child with a crazy uncle), and slow down closing doors, hatches, etcetera. Lastly, you’ll be able to reverse gravity, which carries momentum, thus allowing you to surf on a chosen piece of furniture over long distances, and hitting switches which have been placed on the ceiling for some odd reason. All in all, Uncle’s house is not the most child-safe or accessible location, but it makes for creative puzzling. 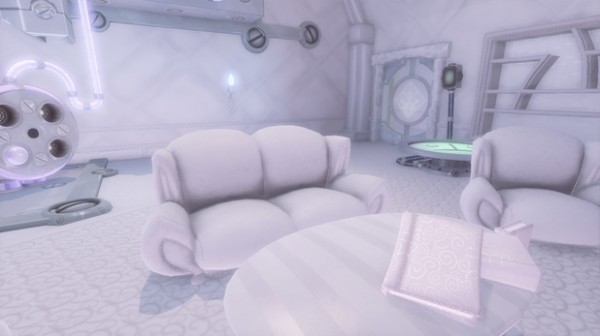 Levels will usually use the excuse of “limited battery power” to deprive you of one or two of the dimensional-shifting abilities, and so though you’ll feel like an all-powerful God when using all four powers in tandem, those opportunities are rare. But the limits provide challenges that actually require you to  think, something I like very much. In fact, the game’s greatest weakness is that as it wears on, particularly on levels which involve using reverse gravity and slow motion together, it relies more and more on twitchy platforming and much less on planning. While the excellent checkpointing alleviates most of the frustration this might cause (that and the game over screens feature humorous quips about life experiences you’ll never get to do), it is annoying.

Regardless, the puzzles remain challenging and clever throughout the game and though the overall experience had less character than its cousins over in the Portal universe, Quantum Conundrum involved far less frustration and as many “aHA!” moments. It manages to carve its own cutesy niche within the first person puzzler marketplace, and as such, that’s the last time you’ll hear a Portal comparison in this review. Quantum Conundrum stands on its own, and it stands up quite well. 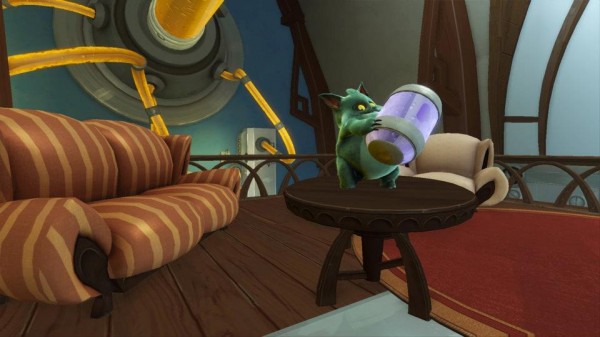 In the looks department, the game uses the Unreal engine to good effect, enhancing the cutesy nature of a child exploring his/her uncle’s mansion… with science. Even the safes look cuddly, and trust me, when you see one of those violently break through glass, you’ll be constantly wary of the massive amount of power in your hands as you carry one through a level. There’s also a furry cross between a Furby and a koala (Uncle’s assistant) that stalks you throughout the game, and who’s shady characteristics cutely escalate as the game progresses.

The only qualm I have with the visuals is that as the mansion is meant to be progressively falling apart throughout the game, the individual levels never really showcase that until the final run to the end game. It’s usually just sterile, carpeted mansion-y set dressing with the occasional broken beams or flood of chemical science goo (think lava, but yellow… and for science).

The sound design for the game is nothing spectacular, though that’s not to say it’s bad. It’s just simply there, doing what it’s supposed to without ever really blowing you away. The exception being one of the tunes that doesn’t play nearly as often as it should in-game. It’s catchy, and I found myself humming it in the shower. 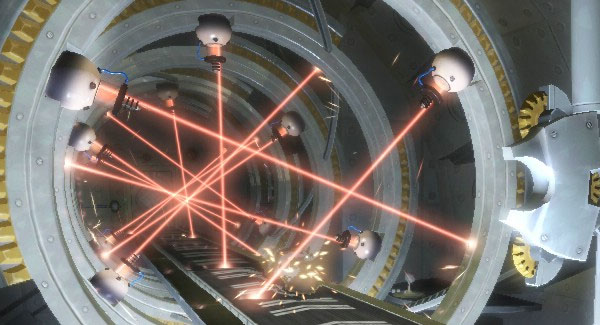 Quantum Conundrum is a solid first person puzzle game that will keep you coming back with a plethora of collectables, achievements, and leaderboards for individual levels. The challenges will make you think first, and then execute, making you feel like a genius whenever you pull off a feat of safe surfing, dodge lasers using slow motion, or just push that button that looked really far away five minutes before. While it strays too much to the platformer side of puzzle-platformer on occasion, the gameplay, if not the story, will keep you coming back for more, even if it just a half-hour at a time.