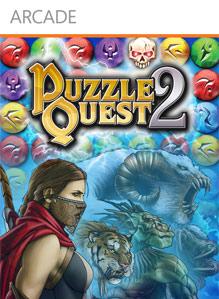 I never really had a chance to try the first Puzzle quest game. It was out there, but with the huge variety of the genre on the market, I just put the series off as a typical puzzle game and went on. I HATE myself now for rejecting what has now been one of the most deep and rewarding puzzlers I have came across. 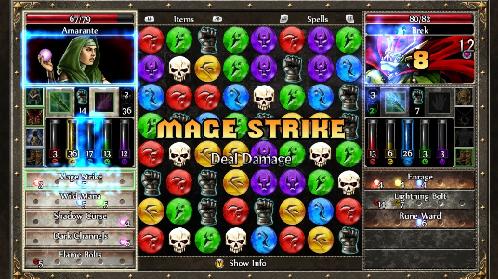 Story
You start out in Puzzle Quest 2 choosing one of the 8 characters with 4 classes, War Mage, Inquisitor, Barbarian or Assassin. The story is what truly makes this game different from other puzzle games, as you must perform main and side-quests for the inhabitants of the small village of Verloren. The evil demon Gorgon and his minions have wrecked chaos through the land and like any hero it is now your job to help in any way possible to bring peace once again.

Gameplay
I won’t lie, when I started playing this, I felt like I was going from place to place just to play a round of Bejeweled with each of the enemies. I was completely blown away just a few minutes later with how everything worked and tied together so nicely. Puzzle Quest can be compared to a point and click RPG, where you direct your hero, he or she will go.

Battling is the most addictive part of the gameplay. When you encounter an enemy, you will see a versus screen followed by your puzzle screen. Just like Bejeweled, you must swap and set up your jewels to fall and make combos and earn points. What sets this game apart is that every time you score, you earn Mana for your magic and attacks depending on the color or piece you combo on.

Each character including yourself has an HP bar and the object is to create your best combos to take out your foe. You have to be on your toes at all times, as the player and the enemy take turns, so one wrong move could lead to the enemy getting a devastating combo and taking you out. The more pieces you take out, the more mana you receive which you can build up to unleash your magic or attacks which can greatly change the pace of battle by changing up the colors out in the field to your advantage, hitting the opponent and hurting their HP gauge or using a status effect to improve your stats or hurt the foes. As your progress through the game, you will encounter more challenging opponents, and sometimes each puzzle all comes down to pure luck. The good thing is you are not set back if you lose, you can pick up right where you left to restart the battle or go better prepare. That leads me to the next topic of gameplay, which is character customization. 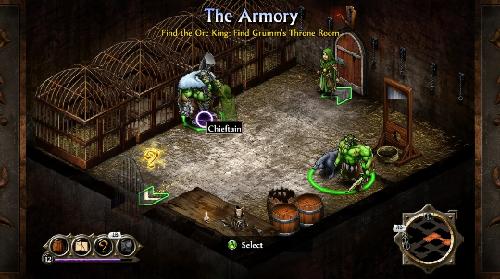 Your hero can level up just like in most RPGs. With shops placed all over the land, it is simple to use the spoils from your journey to trade for more upgrades and weapons that will protect you from enemy attacks and magic. This is actually quite a complex and easy to use feature that adds even more depth to the gameplay and will help you grow stronger for what lies ahead later in the game. Every part of the battle system includes the core match-3 gem matching system, that includes opening certain doors and chests in extra mini-games. The player’s experience as a whole will be rich and rewarding for each battle you win, even if it does come down to the luck of the draw.

Sound & Graphics
The sound in Puzzle Quest 2 seemed sharp and pleasant throughout the whole time I played. In some puzzle games, the music can either annoy you or be slightly noticeable. The music theme is your basic fantasy/medieval soundtrack which is a good thing, as it gives you the feel that you’re not just playing a puzzle game, but also a unique RPG. Sound effects are on tune with attacks and magic used as well as the small cut scenes that progress the story.

As far as graphics go, each character has their own sprite which has a fitting look for the story. The main character models are not forgettable and I could easily say I will associate them from this title. Why I mention this is due to the fact that many puzzle/rpg titles out there don’t really spend much time on art and instead give you a generic character to play as, but luckily Puzzle Quest 2 is not one of those titles. The enemies are a bit generic, such as goblins and rats, but the core of the game-play is on the puzzles, not the enemies so even picky players shouldn’t mind. I didn’t notice any hiccups when it came to the core game or the outside world. Character’s animations are a bit stiff though as you walk to your next target. 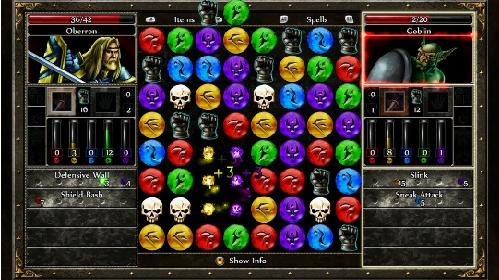 Overview
Puzzle Quest 2 is a gem for your arcade collection on your 360. With game-play that is addictive and fun to play, I found myself going back and losing hours just challenging enemies and customizing my character.  I would say there is a very high replay value even if puzzle games are not your thing due to the complex upgrade system and RPG elements to keep you wanting to progress until the end. There is also a multi-player option as well to add to that with tournament mode, putting players in a head to head battle as they choose 4 monsters each to battle with until the last man is standing . There are some generic enemies and you might lose quite a bit just due to luck. Nevertheless, the mixture of the Bejeweled-like playing field and RPG elements truly come together perfectly creating the best thing since peanut-butter and jelly.

I give Puzzle Quest 2: