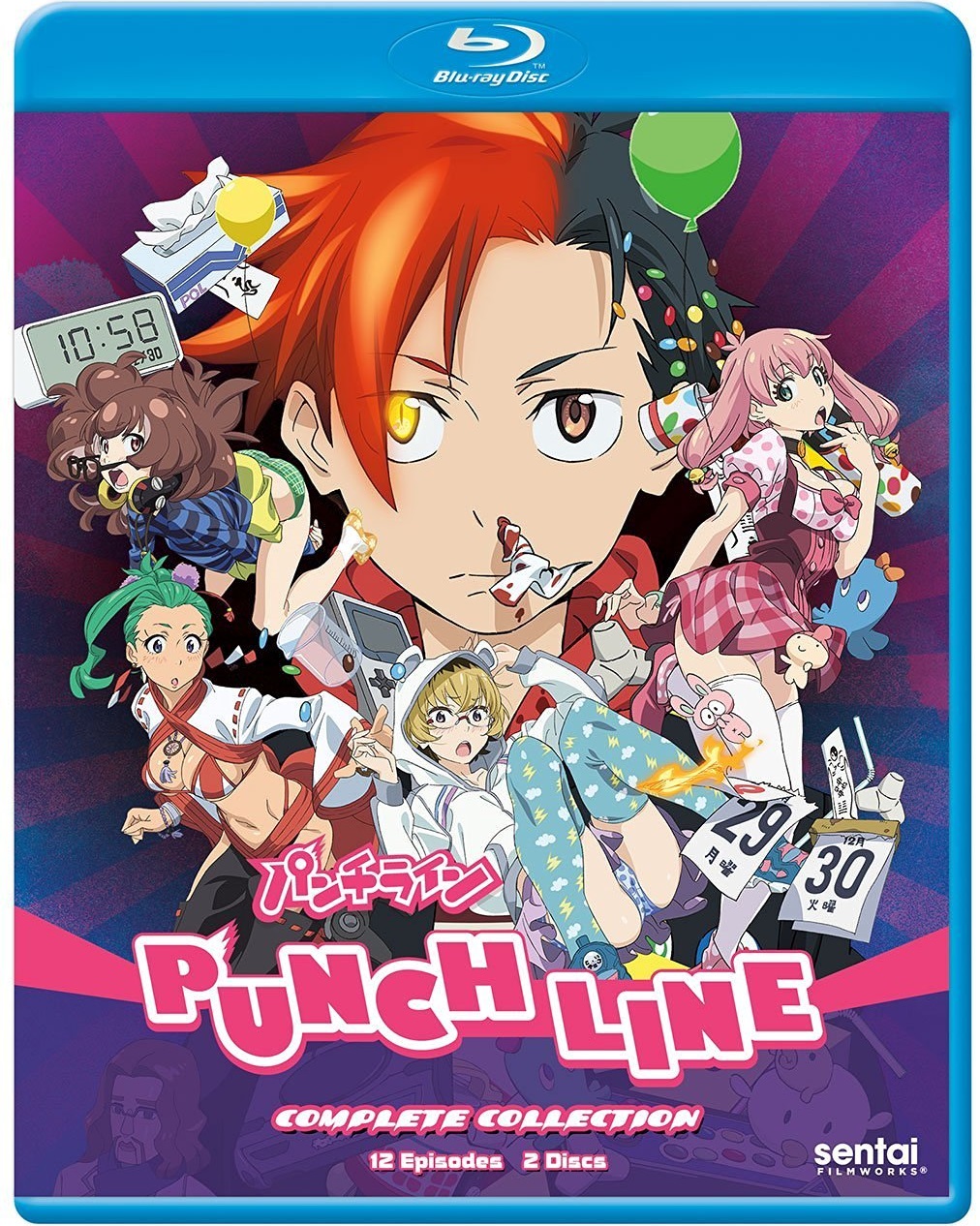 When it comes to anime series, even the most absurd sounding idea can turn into something amazing if handled correctly. In fact, some of the strangest anime tend to be highly regarded thanks to their unique premises and art styles. The anime original series Punch Line attempts to embrace that type of crazy premise but now that it has been released in North America, is it one that is actually worth sticking around for?

Despite living in a boarding house with four beautiful women, Yuta Iridatsu’s life is about to go from something quite pleasant to something rather terrible. While riding on a bus in late December with his neighbor Rabura, the bus is hijacked by strange men with guns. Although a super heroine by the name of Strange Juice comes busting in through the back of the bus, things begin to turn sour as the leader of the group has her at his mercy. That changes when Yuta catches a glimpse of Rabura’s panties and enters into a glowing transformation allowing him to tackle the assailant leader out of the bus and into the river. 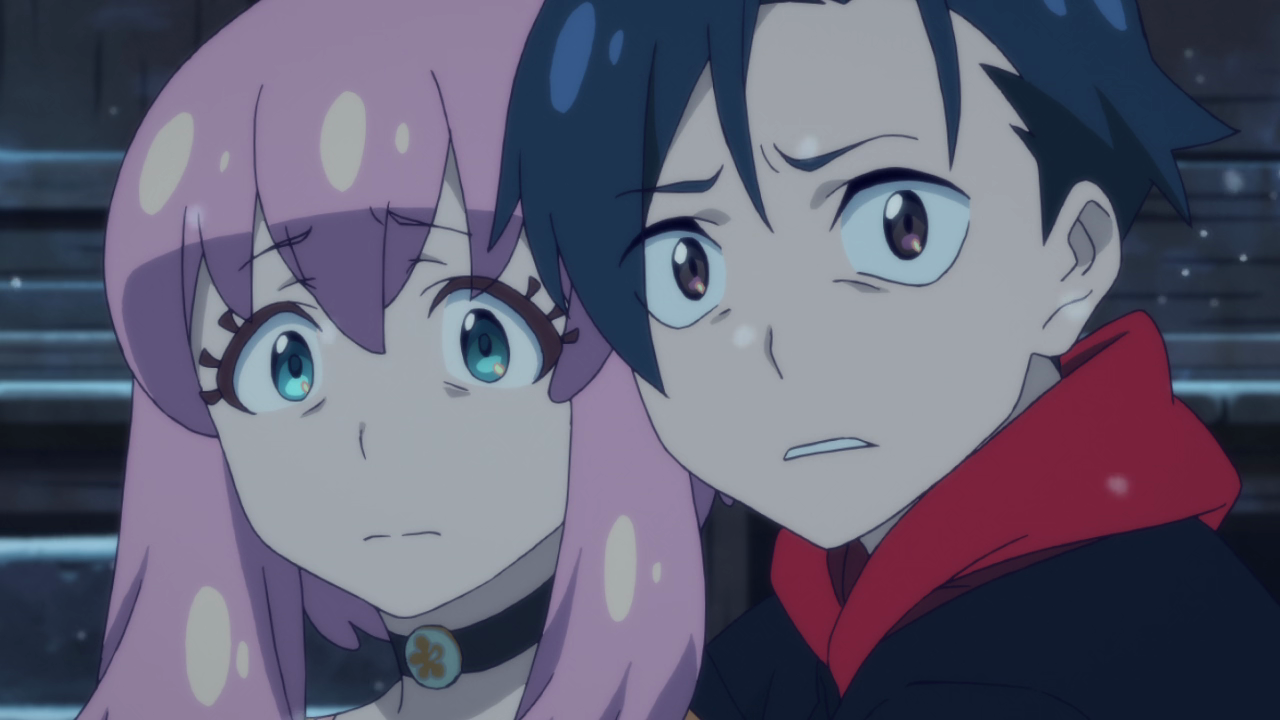 After being rescued by Strange Juice Yuta just so happens to see her panties as well and passes out completely. Upon passing out a strange beam of light forces Yuta from his body and transforms him into a wandering spirit that, with the spirit of a cat named Chiranosuke as his guide, can only regain his physical form with the help of a book that is somewhere in the Korai House where Yuta and the girls stay.

Problem is, if Yuta ends up catching a glimpse of any of the girls’ panties or bras more twice in a row then it is game over as he not only powers up once more but produces a geyser of blood and causes a meteor to strike the Earth and kill everyone on it. With the ability to travel back in time thanks to being a ghost, Yuta must try to learn his powers as a ghost while also learning about the various secrets that the members of the household have kept hidden. 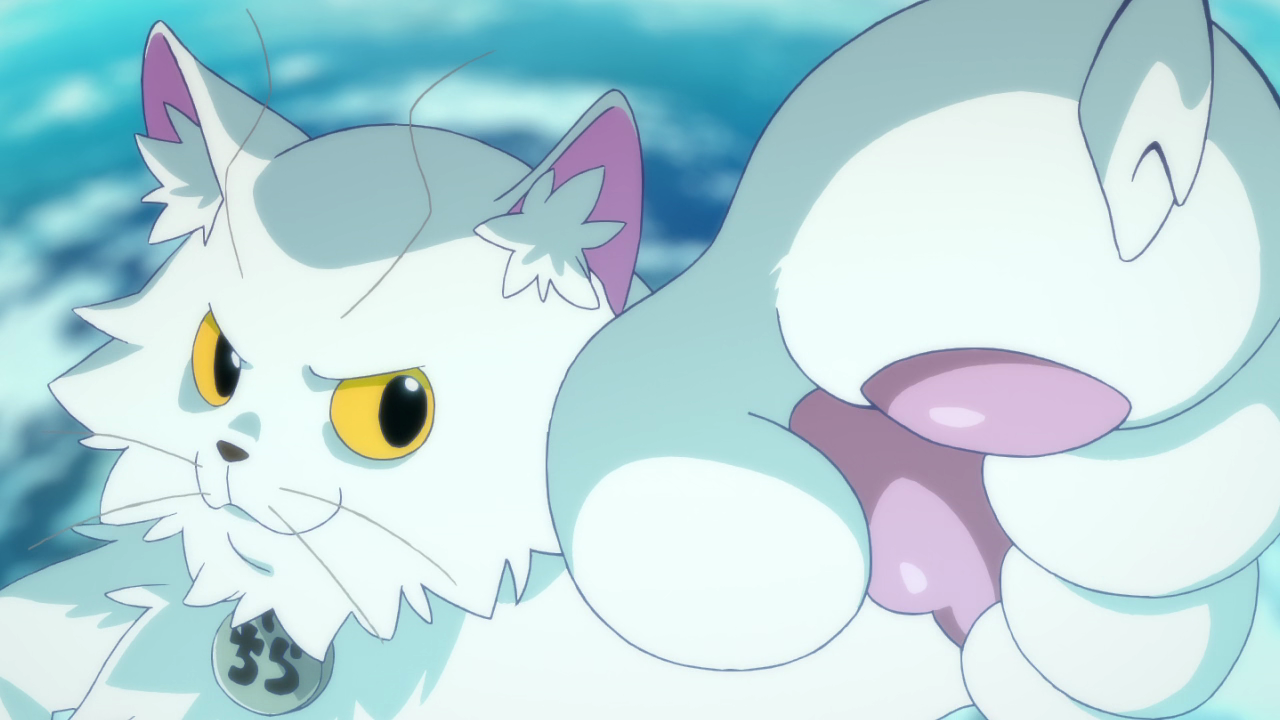 If Punch Line’s premise sounds ridiculous to you, believe me it is. The concept of following a disembodied spirit who must try to retake his body back from something else that has occupied it while also doing his best to avoid catching glimpses of his neighbors’ underwear or risk destroying the world is something that this series focuses heavily on for the first half of the series and thanks to this it is also one that viewers likely will tune out of if they don’t like the wacky style of humor the show embraces during these episodes.

I say this because boy do things become strange and almost no questions are answered while more are raised as we learn about the idol member Mikatan who also happens to be Strange Juice, the hikikomori Ito who keeps a bear cub as a pet, the failed exorcist and man hungry Rabura, and the landlady Meika who likes to take on various personas but quickly reveals she has a number of skills of her own. While I won’t delve deeper into what each of these characters end up revealing, as it would spoil too much of the series, I will say that things begin to actually make sense as the series goes along. 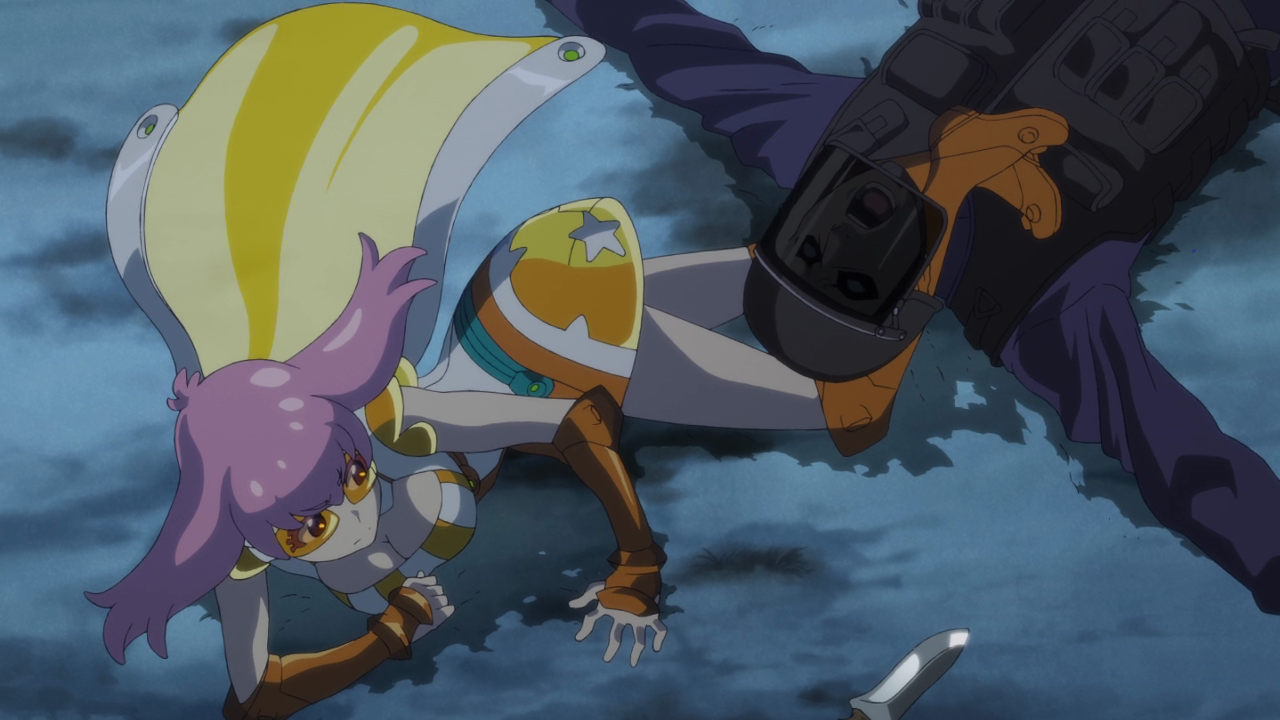 In fact, after the sixth and seventh episode reveal major events and plot points, Punch Line takes on an entirely different tone. While still featuring plenty of ridiculous comedy, the focus of Punch Line shifts to one that explores why these things are happening, Yuta’s past, and let’s just say that bit of time travel comes into play as well. Even elements such as Yuta’s panty apocalypse are explained and, given the way things are developed in the world, fairly believable.

The fact that the absurd nature of the numerous twists and explanations that are provided to the viewer actually begin to coalesce into a solid storyline is rather surprising. Although there are a number of various plot elements and unanswered questions left by the end of the series, as well as one that forces things to go in a fairly unexpected direction at the last minute either to wrap the series for good or simply to throw viewers off one last time. 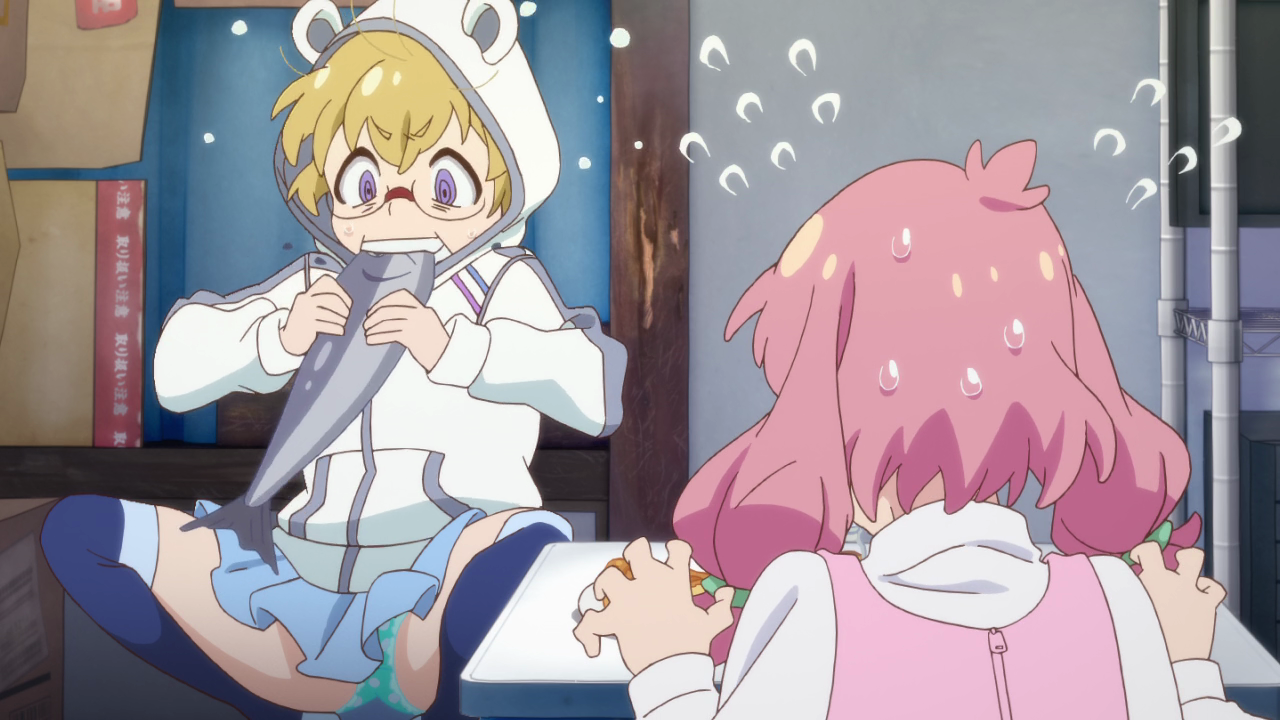 This means that while plenty of details are left up in the air, especially when certain previous plot elements that are described as essential are then played fast and loose or ignored entirely thanks to the loose nature that the time travel in the series is, Punch Line surprisingly manages to deliver an interesting story that you never would have guessed from the initial introduction and the repeated phrase of “Don’t think too hard about it.”

Punch Line features a rather unique art style featuring plenty of color and attention to detail in both the designs of the various characters’ rooms as well as their actual outfits. The style tends to shift to fit more humorous scenes in an effort to push the humor as being even crazier than it seems while the action scenes, of which there are quite a few near the end of the show, are fluidly animated and appear to have been given a lot of time as the details here are nicely handled. 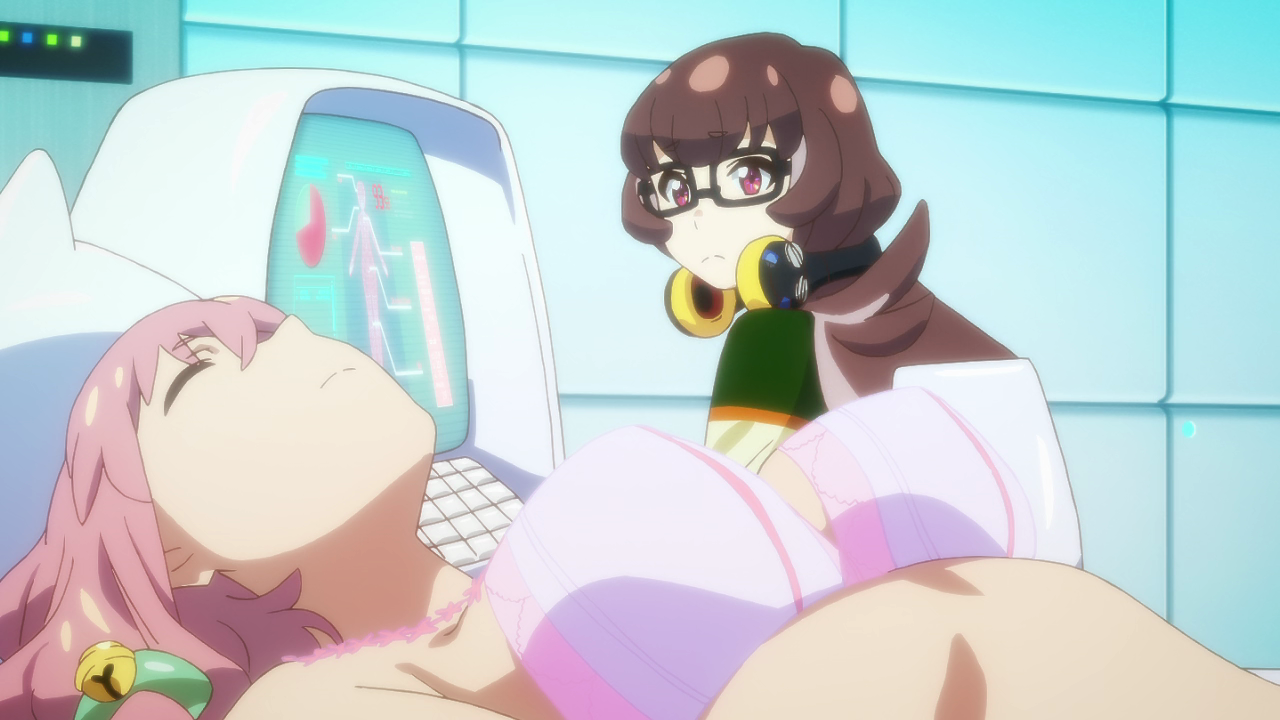 It is worth noting that although Punch Line pushes itself as a series about seeing a girl’s underwear, that there are surprisingly very few focused fan service scenes since, most of the time, they are shown in a way to advance the story. That being said, it is clear that the animators knew that these underwear shots had to be highly detailed and varied to fit the personalities of the girls wearing them and also made sure that almost any time there is some sort of movement the viewer is given at least a glimpse of their panties rather than putting them front and center for the aforementioned story scenes.

Sentai Filmworks has chosen to release Punch Line with only the original Japanese voice track as an option. This may disappoint some but the ridiculous nature of most of the humor as well as certain segments only work well thanks to the Japanese language and considering the voice cast features the likes of Rie Kugimiya, Mirina Inoue, and Sora Amamiya, viewers will be in for quite a treat. It is worth noting that there are a number of moments that English dialogue is spoken by Japanese voice actors and, as one would expect, it sounds pretty terrible, but only during these scenes. 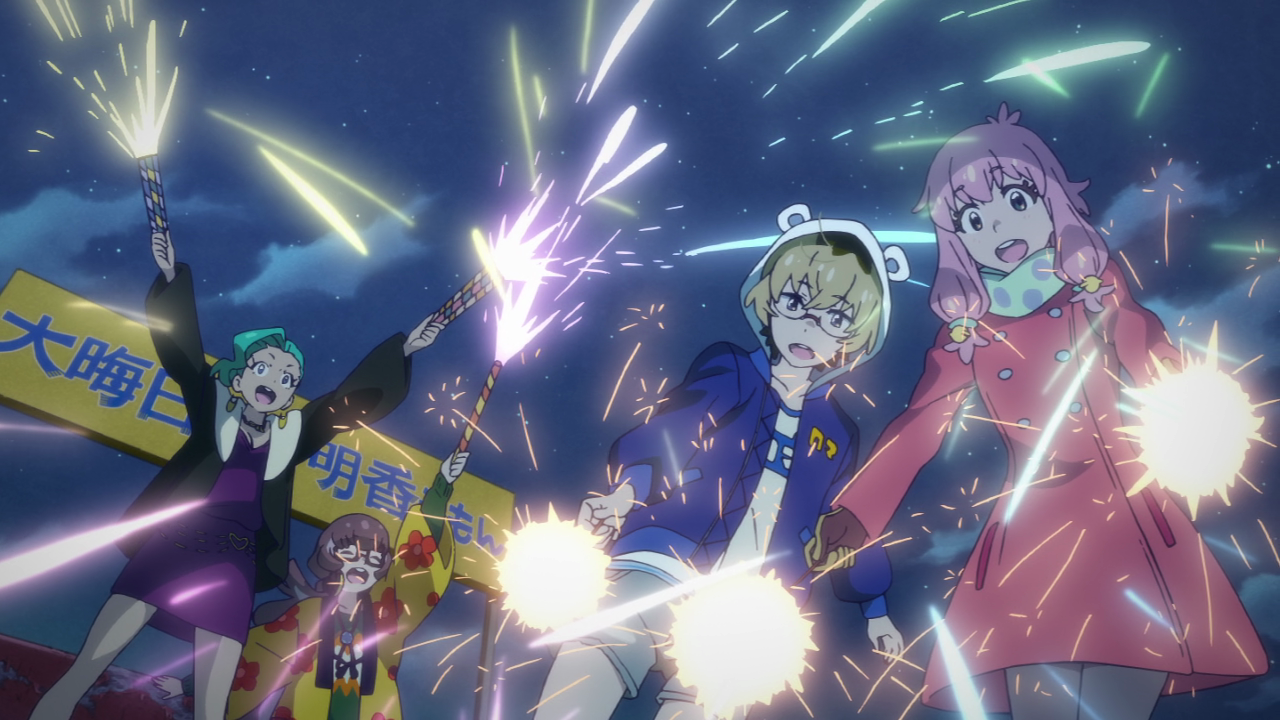 The soundtrack for the series if your standard fair for an anime such as this one though there are a number of scenes that are set to some very fitting and emotional sounding tracks. The opening theme is comedic in nature and plays on the way Punch Line sounds like “Pantsu” in Japanese and is simply called “Punch Line!” by Shokotan Denpa Gumi while the ending theme “Honey Honey Honey” by Ayumikurikamaki is a more emotional closer.

The bonus features included in Sentai Filmworks’ release of this series include clean versions of the opening and closing animations as well as trailers for other products from the company.

Punch Line manages to reveal its true colors halfway through the show but getting there does take some patience as the comedy is incredibly hit and miss and comes off as ridiculous as the premise of the story initially is presented as. Once Punch Line’s absurdity begins to come together viewers will be surprised at the solid storyline that develops from the insanity, especially once the focus and tone shift towards more serious developments.

Although it may drive off many from the way things appear at the onset and the initial premise, Punch Line manages to deliver a fairly satisfying storyline filled with numerous twists that manage to tie nearly everything together into one unique show.
8