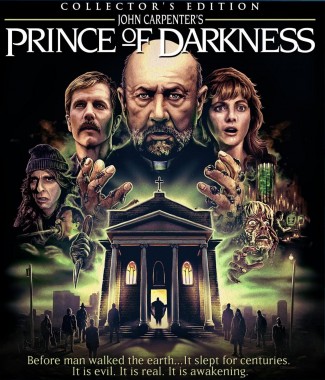 Overview
When it comes to horror movies, no man has crafted one genre into an art-form more than John Carpenter. Halloween, Big Trouble in Little China, and several other films helped launch the careers of young talent that are now considered legends in the business, and while the man himself hasn’t had a success in a good while, his contribution to cinema has paved the way for thousands of current directors as they try to capture some of that movie magic. In the 80’s, Carpenter was at his peak, getting ready to produce yet another classic in the form of “They Live”. One smaller film that rarely sees much attention is the film before that however, which is of course 1987’s Prince of Darkness.

Re-enlisting the talent of Donald Pleasence (Halloween) and Victor Wong (Big Trouble in Little China), Carpenter put together a project that seen an ensemble cast deal with the ultimate evil. Prince of Darkness is what you would call a cult favorite, as while it is loved by fans of the genre, the average movie buff would probably be clueless to its existence. Shout! Factory (or Scream Factory in this case) specialize in showing some love to the non-mainstream however, and have brought the film to Blu-Ray for the first time. Is this one horror flick that can make the jump into the present day? Let’s find out. 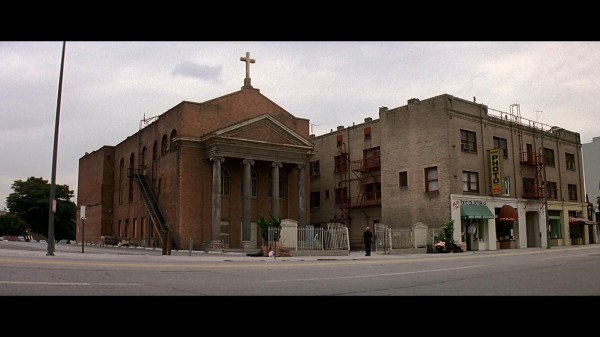 Story
Prince of Darkness’ strong point is not really its story, but rather its execution. We start out with a group of physicists who are in their late 20’s and early 30’s, and have suddenly been tasked in investigating an ancient container of green, swirling liquid. Pleasence, who plays the priest in the film, has brought these scholars and their Professor (Victor Wong) to an abandoned church where the container is located, with all of the tools provided to the team for their research. There is a dark secret to this container however, as it holds the power to possess humanity with a simple squirt of water in the mouth. As time rolls on throughout the film, more and more of this team starts to turn to the dark side, and it is up to the priest and remaining squad to restore order and rid the evil once and for all.

Its funny. Writing about that entire scenario brings out a chuckle or two, as this film sounds like a camp fest on paper. I love campy horror movies, but if you go into Prince of Darkness with that kind of mindset, you will probably be rather disappointed with the result as Carpenter’s bizarre creation here takes itself very seriously, and that is what makes it so enjoyable. The ensemble cast don’t come with back-stories, and that in itself is ok. You have the leading man Brian Marsh who is at the center of it all, along with his love interest Catherine, the young man stuck with comic relief – Walter, and a bunch of other characters that have interesting qualities, but never really come into the forefront enough for us to care about their inclusion. Horror movies back then did this a lot, as they kind of painted a clear picture of who to root for without going into detail for those poor souls that are just going to die in a quick and meaningless fashion. Sure, it made the endings predictable, but that ending is at least satisfying. 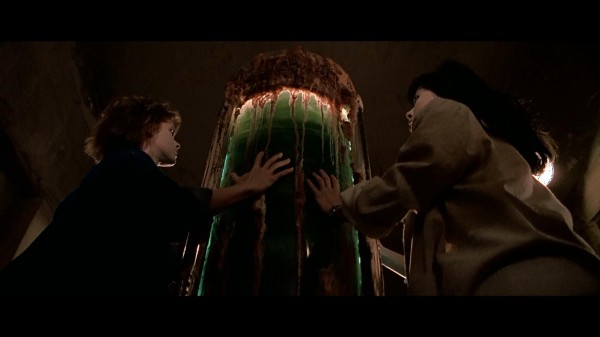 As the evil goo (which we will call it here) becomes more intelligent, the cast slowly begin to dwindle in numbers. You might think “Why don’t they just escape?”, and you would be right, but a solution is conveniently set in place from the start of having random homeless people lead by Alice Cooper (who is also playing a part) surround the church to await the second coming of their dark overlord. You leave, you die via whatever sharp tool these beggars can get their hands on. The liquid also has an odd way of infecting a human as well, as it shoots a stream of water into the mouth of its victim, making them gurgle in agony until they are fully possessed. Once under the dark one’s control, these zombie like figures can also infect via that lovely spout of goo, giving this threat a bit more substance as a whole. 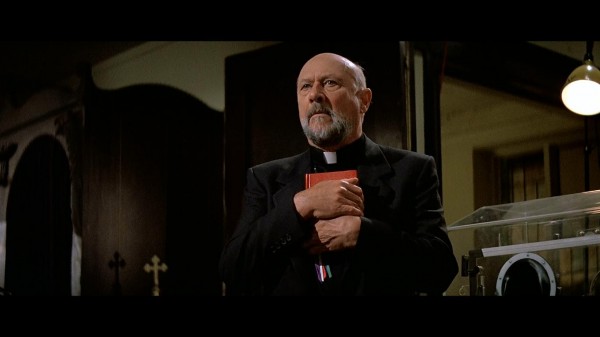 Sure, the story is out there and a bit on the silly side, but as I mentioned, execution is everything within Prince of Darkness and that is one thing that Carpenter hit right on the head. Whenever there is a death, or a kill, there is no build-up. To make sense of that a bit more, imagine (while not attaching this example with the movie) that a character is being stalked by one of the possessed. Instead of some intense chase, the villain runs up and just stabs the other character in the throat. The end. Those gritty moments give the film a rawness, and that edge keeps the excitement high as we head into a somewhat intense yet forgettable ending to a film that at least made for an entertaining evening.

Extras
The Special Features within Prince of Darkness on Blu-ray are not too plentiful, but enough of an excuse to re-watch the film and get some further knowledge on how it was crafted from top to bottom. It is surprising to hear some of the stories John Carpenter has as he relives the film, and his interview is just as insightful where he speaks about how this project came about. Alice Cooper has also been interviewed which is odd due to the small role his character had, but considering the man was and still is such a star, it was great to see his own perspective of the film’s impact. We also get a nice little segment reflecting on the special effects and make-up, as well as an alternate TV opening and an inside look at the chilling soundtrack. Fans of reversible cover art will also love to find the stunning, yet eerie original movie poster can be found on the other side, but oddly enough I find the standard cover to be the more stand-out of the two.

Visuals
Visually, Prince of Darkness still looks like it is from its decade. There isn’t a lot to do to make older films get that sleeker, high definition look aside from your standard polishing, but for a film that has such a dark, yet intriguing setting – the older cameras do well to put the viewer in that space. Speaking of the setting, that is another element I really was fond of during my viewings of Prince of Darkness. There is something about the older buildings used in these classic horror experiences that truly feel realistic, no matter how over the top the plot. The lighting was used effectively to convey that our characters are on a bit of a timer themselves as they try to restore order and stop Satanic goo, and the old church utilized as the surroundings creates a claustrophobic atmosphere as certain faces become trapped with nowhere to run. 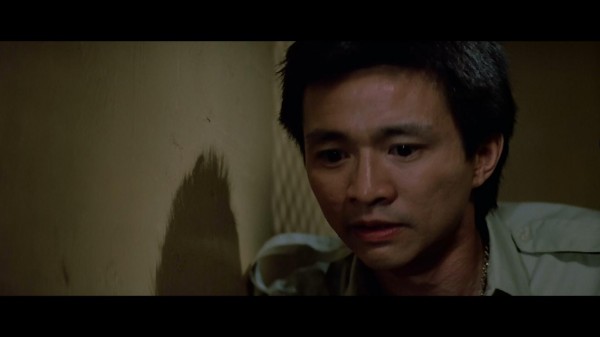 As far as special effects go, there isn’t a lot to be seen other than some liquid falling off a ceiling. The jets of water shooting out of one mouth into another is bound to make you laugh the first time as the concept is ridiculous, but Prince of Darkness doesn’t fear crossing that line and pulls its over the top gimmickry off quite well. As far as the blood, this can be a bit gory, but not gory in a SAW way, but rather a Re-Animator styled fashion. There is a lot of the red stuff, but a good portion of the scares to be had are the ones that allow the viewer to use a bit of imagination, rather than to have the kill painted out for them in one gruesome picture.

Audio
Soundtrack wise, this is yet another flick that put a lot of its budget into its score, and it shows with how much intensity the remastered tunes are both clear and chilling, giving this old church a good number of scenes that are sure to leave the viewer uneasy at times. There might not be a lot of music leading up to a kill, but what comes after in audio form is a great reflection that retains the shock value while telling the viewer they can now take a breath. The acting and screams are fine as well, but Donald Pleasence really steals the show here as his over-acting as the priest sells the serious tones in the movie ten times beyond what could be expected, and even though it is a bit of a stereotype for the actor, its obvious to see just why Pleasence was selected for this role. 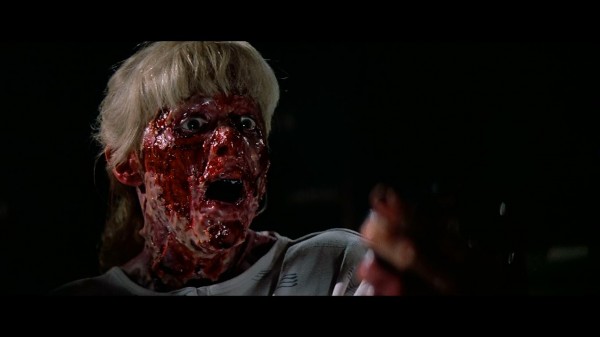 Overall
Prince of Darkness is not the scariest film in the genre, but it is one that all horror fans need to look into as a history lesson of sorts. The acting and entire plot come across as over the top and campy, but the gritty kills and dark undertones are sure to pull you in for what is nearly two hours of non-stop entertainment. This film could have been about anything really and still had the same result, as Carpenter was such a strong writer that he managed to put together a solid script for a wildly bizarre concept. The crazy mixture of physicists, possessions, and an intense performance from Donald Pleasence come full circle in Prince of Darkness to create a pure gem of a film, and with the newly remastered visuals and tons of extras included, now is the time to discover the dark side you might have missed.