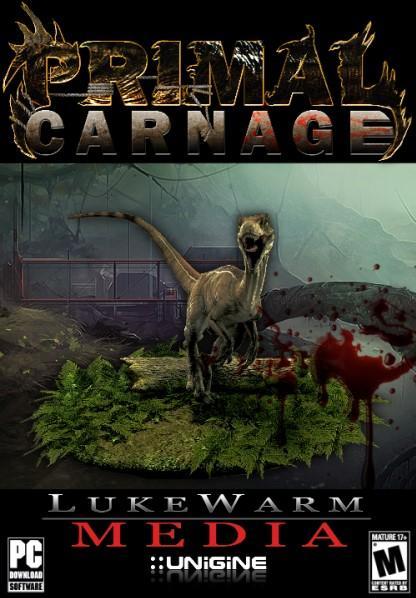 Overview:
Primal Carnage is a multiplayer only game about a war between Dinosaurs and Humans. An experiment has been botched and out roll an army of dinosaurs to fight an army of mercenaries. Developed by Lukewarm Media and published by Reverb Publishing, Primal Carnage seeks to fill a hole in the market for shooters today with a fun, action packed online game. Powered by the Unreal Engine and available via Digital Download, does Primal Carnage do enough to separate itself from its competitors and be worth your time? Let’s check it out.

Story:
To start off with the game doesn’t really have any story present that will ultimately add to the experience. Upon some research I found out that the humans were dispatched to an old military island where dinosaurs had been unleashed thanks to an experiment gone awry, but this is never brought up or even hinted at in the game. Luckily however this is a slightly better set-up for multiplayer prehistoric shenanigans when you compare it to a certain release set in WW2 that contained Evil Nazi Dinosaurs. No the dinosaurs you’ll find here are but your regular toothy adversaries, devoid of any human tampering or modification. 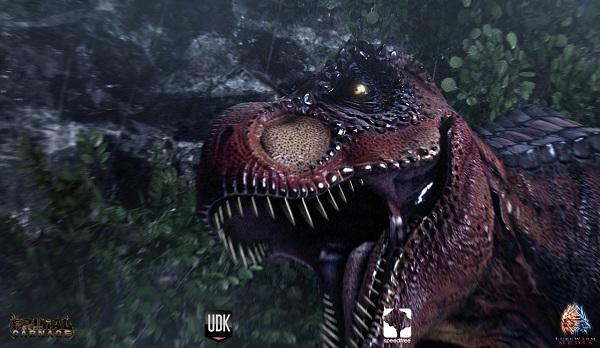 Visuals
Primal Carnage offers surprisingly rather appealing aesthetics considering its low budget and it being run on Unreal Engine 3. Models are nicely done and smooth animations compliment each character (or dinosaur) in the available roster. Foliage is actually very pretty to look at and swings and bends as you move through bushes. The overall visual design means that each level looks like a place that could really have been lived in before the outbreak rather than just a playground for online play; while human weapons and character designs are up to the standards of other Steam releases. Each map has its own special art style separating it quite noticeably from all the others, resulting in a nice variation of environments for the most part.

Audio
Music in the game however is incredibly repetitive with only two tracks playing throughout my entire time with the game. One track for when playing as dinosaurs and one for when playing as humans, both of which offer little in the way of mesmerising tunes. The human track is definitely superior to the dinosaurs but only when put side by side to compare and if just playing regularly you’ll barely notice a difference in music no matter what form you currently inhabit.

Dinosaur sound effects are the strongest part of the game’s audio repertoire however, with the T-Rex’s signature roar and the Pteranodon’s loud screech standing out above the rest. A good thing too, considering Primal Carnage’s obvious focus. Humans and their guns sound a bit dated but nothing too distracting when focused on play. The assault rifle sounds like it certainly packs a punch but the other weapons don’t sound nearly as effective. You’ll find little reason to pay attention to any of the sounds regardless, with many players I think opting for their own music over the mostly poor ones provided. 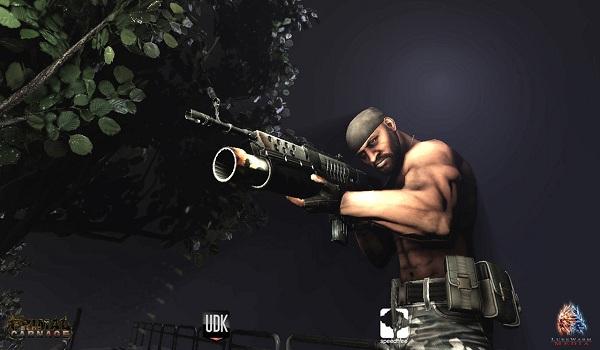 Gameplay
Primal Carnage is incredibly similar on the human side of things for anyone who has ever played Team Fortress 2 or any other shooter available on Steam. Teams are both broken up into five different classes and need to ultimately work together if they wish secure a win.

The game lacks any real tutorial system to it, which it really needs especially for newcomers to the game. When you have to hold down the Shift, Space and W keys all at once just to get a pterodactyl up into the air you know your game could benefit from some useful player guidance. Performing some actions take up stamina like sprinting, jumping or leaping for Raptors. Stamina recharges over time when not performing these and seems to recharge at a balanced rate as long as glitches don’t occur.

The game is incredibly buggy, but that is probably to be expected for a low-budget game such as this. Some guns will continue to show their firing effect a second after you’ve finished pulling the trigger, while as referenced earlier stamina will refuse to recharge. Primal Carnage is still in its early stages of release so hopefully such issues will be cleared up shortly in a patch.

Both dinosaurs and humans have a primary and secondary attack which is exclusive to their class. The Carnotaurus can charge players with its horns and maim with brutal sweeping attacks while the (slightly racist class) Pathfinder can throw flares to blind opponents and then close in for the kill with his shotgun. A particularly cool concept for a human class is the Trapper who can fire nets that bring all the smaller dinosaurs to the ground and temporarily stop the attacks of much larger, hungrier predators. Classes really compliment each other very nicely with their own distinct abilities but with most players’ fondness to constantly choose the Commando and the Novaraptor, a lot of the time this diverseness was sorely missed. 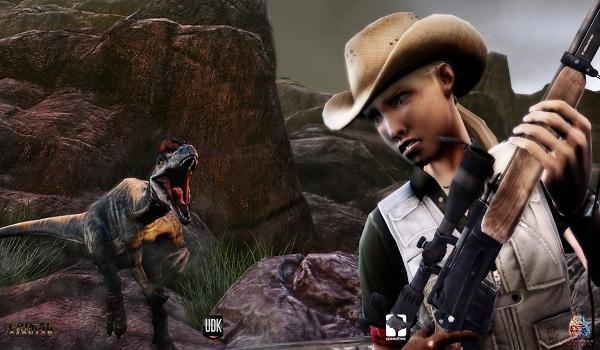 The game has a nice balance between teams and upon joining a server players will automatically be allocated a side to fight for, preventing any normal balance issues for teams. What I really liked about the game was how humans are forced to stick together to survive and to ultimately overcome their more primal (get it? Ha ha) brothers. Try and wander off by yourself and you’re raptor meat. No question about it. A team of humans can quickly and easily take out a Tyrannosaurus, a feat which is usually far beyond that of a lone Mercenary. Dinosaurs have more leniencies in this regard but must also occasionally team up to take out groups of humans.

The five maps available so far seem to all be pretty well balanced. Seem to be. I’m not sure whether Australia’s only dedicated server just decided to only ever run the “Docks” map for incredibly long periods of time or whether it has just become the new de_dust2 of Primal Carnage remains to be seen. Regardless, there was very little issues with lag or low player count and the game supports a very strong and helpful community. Joining any other server than Australia’s was a pain but considering the developers are still working out all the bugs, it is understandable. The large amount of time I spent on “Docks” did give me an appreciation of the combat variation present in each map however. The port meant that there were large open spaces to fight in on shore as well as close, claustrophobic ones on the nearby ship; meaning players would be forced to change their class as the situation demanded it or face annihilation. 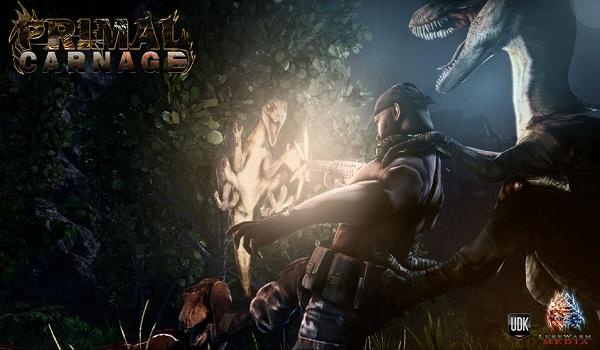 A distinct lack of modes to the current product is really what hinders the game most at the moment. Constantly shooting at the same dinosaurs or eating the same humans over and over again really gets repetitive. Some cool take on Capture the Flag or a mode where humans have to hold out against dinosaurs for as long as they can would have been nice additions to the game, but sadly these are not present in the current product.

Playing as humans is a really different experience to playing as dinosaurs and vice versa. The mercenaries have a standard first-person camera and use weapons and gadgets to take down their foes while dinosaurs have a third-person camera and use their teeth and claws. While humans controlled nicely and there was little problem coordinating them across each map dinosaurs really suffered. Their controls are incredibly clunky and it is quite difficult to steer in the right direction, something which is impossible when sprinting. You cannot immediately stop either so you have to either steer yourself purposely into a crate until your legs stop moving or risk falling into water and your death, especially on the aforementioned ship. The camera for dinosaurs seems to always find itself buried amongst tree leaves or hitting buildings and invisible walls and some fancy mouse work in intense battles is required if you really hope to see what is going on. There are currently many, many smaller issues which really add up in the overall gameplay. 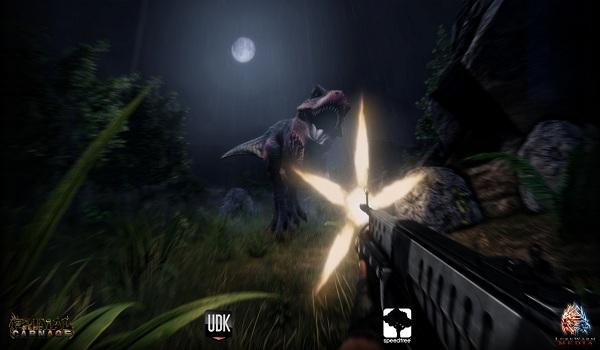 Overall
Primal Carnage is a game that really tries something different to fit in to the already cluttered shooter market that currently fills most of today’s gaming titles. What it makes up for in originality however it loses in the many issues that currently plague the game and ultimately the fun you can have with the product. There are certainly moments of greatness in this muddled product, going on a murderous rampage and killing an entire team as a Tyrannosaurus, dropping humans to their deaths as a Pteranodon and fighting off a group of raptors with a desperate team and your back against the wall, but they ultimately don’t add up to enough to compensate for all the frustration you receive to get there. Nor is there any levelling system or particular rewards to keep you playing the game past a couple of hours of occasional fun. In the future this game may be patched or updated in such a way that fixes most of these issues but for now all you receive from the game is a shallow, repetitive deathmatch that just doesn’t do enough to really separate itself from the already razor sharp competition.