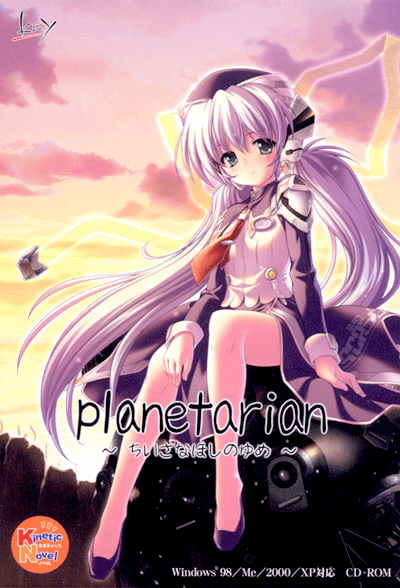 Overview
For quite some time, visual novels were disregarded by many publishers in the West due to various reasons, with translation hurdles and being a niche product being some of those reasons. However in recent years not only are more visual novels being officially released in English, a few have even cropped up on handhelds.

Despite this, there remained one company, Key, that has always had a reputation for creating great stories but none of this Key’s products were ever officially released in English. That is until Sekai Project announced that they were working with Key to release an official English version of Planetarian ~the reverie of a little planet~ on Steam. Now that this older visual novel has been released, is it a worth picking up?

Story
In the future, the Earth has been turned into an apocalyptic wasteland. Due to advanced technology and incredibly lethal weaponry being used indiscriminately, humanity has been nearly wiped from the face of the planet. Those that are still alive struggle to stay alive as not only are resources incredibly scarce which causes fighting amongst survivors, but powerful robots of war continue to patrol the wasteland, following their long forgotten orders. 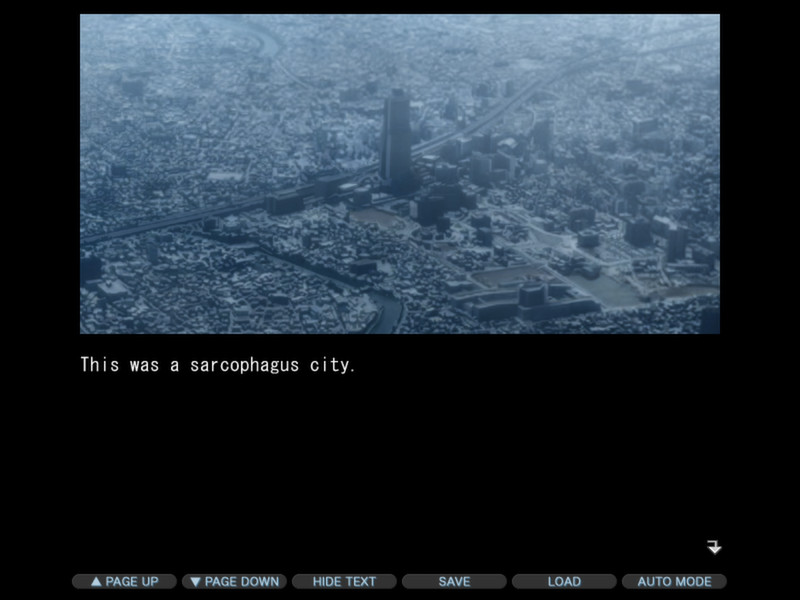 To make matters worse the skies have long clouded over and tainted rainfall is the only constant in their lives. The story follows a man with no name who is simply called Junker, a profession where one must travel into dangerous areas to scavenge for supplies and valuable items. With his luck seemingly running out, he enters what he believes to be a military structure only to find that the inside of the building is nothing like he expected and it also contains a lone occupant.

This occupant happens to be a young woman, or should I say female looking robot, named Hoshino Yumemi. Yumemi has been keeping watch over this building, a planetarium, for the past thirty years with no knowledge of the events that have befallen the world since then. Instead she gladly waits for the next customer to arrive so she can show them the stars. With the gruff Junker used to a gray world full of danger and death around every corner coming face to face with the ever cheerful and incessantly talkative Yumemi, there is an immediate clash between the old world and the current apocalyptic one. 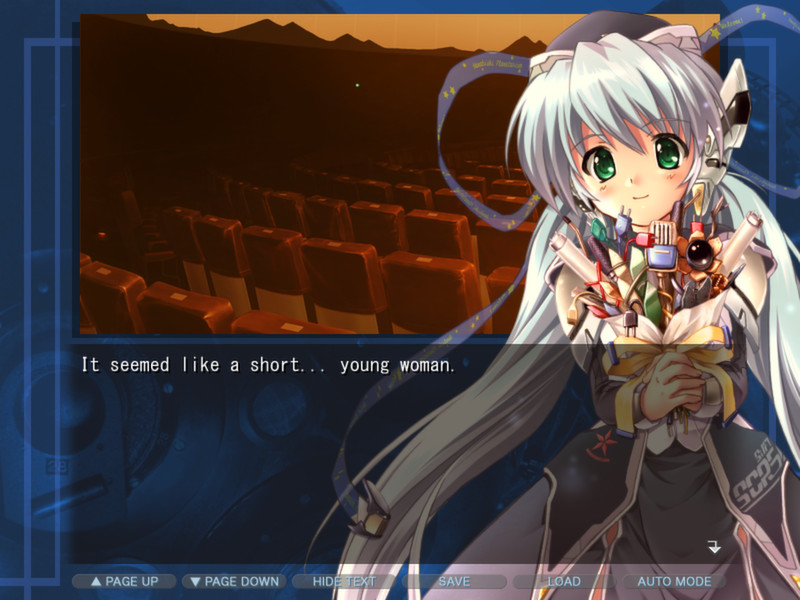 To go any further into the various aspects of the story in Planetarian ~the reverie of a little planet~ would be doing you a disservice as this story is one that is best experienced when you have no idea what to expect. Just know that there is a reason that Key’s stories have always been sought after in the West and Planetarian is a great example of why that is as it explores existential themes and tugs at your emotions.

Gameplay
It is worth noting that Planetarian ~the reverie of a little planet~ is a “Kinetic Novel” which means that unlike other visual novels, there are no choices to be made nor are there any separate endings. The story is one that is told through a single playthrough with the player only clicking to advance the dialogue, or selecting auto mode if they simply wish to read as the text advances. You can also back through the text log to read or listen to the dialogue again by pressing Yumemi’s ribbon icon.

Because of the linear story, there are only five available save slots, but this isn’t an issue as not only is the story only about three hours long, players can load from the beginning of any chapter. There are a few customizable aspects in the novel, as players can choose which font type they would like the story to be displayed in and, if you can read Japanese characters, players can choose to switch the text language to Japanese through Steam if they wish. 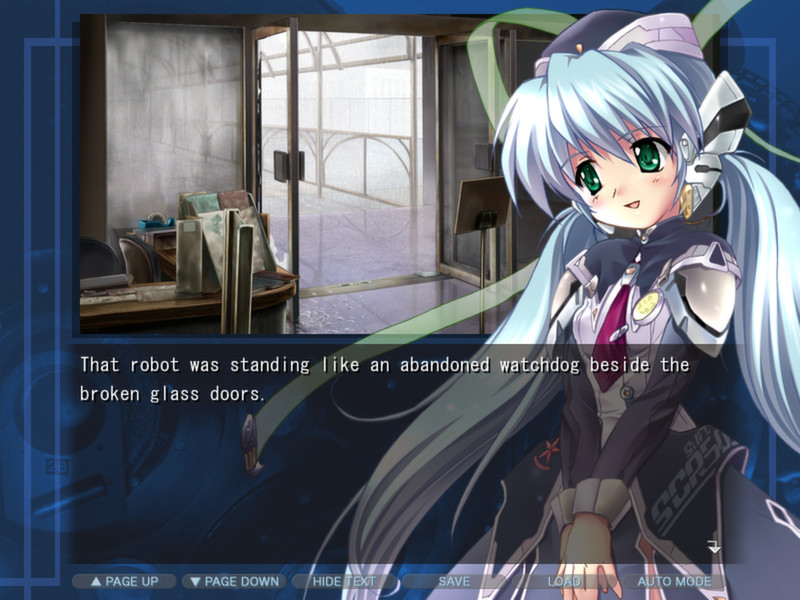 Once the game is completed, a few extra options open up in the form of a CG gallery as well as a music mode that contains all of the background music, including the opening and ending songs, used in the game and additional details about each song, such as the composer, arranger, etc.

Visuals & Audio
It is worth noting that since there are a limited number of characters in Planetarian ~the reverie of a little planet~, the only actual character model shown off happens to be Yumemi. One can tell that the artist spent a lot of time working with her character portrait because of this, since not only does she feature a number of different expressions but her ribbon changes patterns and colors to fit her actions. 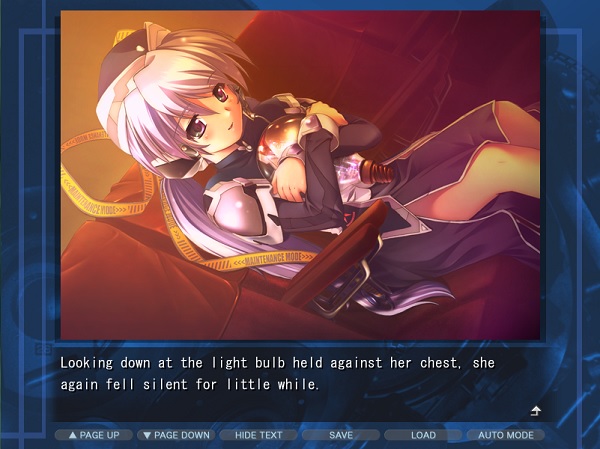 There are only a few actual CGs present in the story, with some of the CGs featuring constant rain animation, however they are nicely drawn and set a proper atmosphere for the events that are unfolding, which is assisted by fitting background music that ranges from peppy to dangerous in tone. Both Junker and Yumemi are voiced in this release of Planetarian ~the reverie of a little planet~, which is essential considering how little time the novel has to draw the player into the story and invest in what is happening.

Overall
Planetarian ~the reverie of a little planet~’s straightforward nature and relatively short length might be a catching point for some, but those who do choose to pick up this visual novel will find themselves a masterfully told story that that accomplishes something very few visual novels are able to do. Leave a lasting impression on the player as they remember the story long after the credits roll.