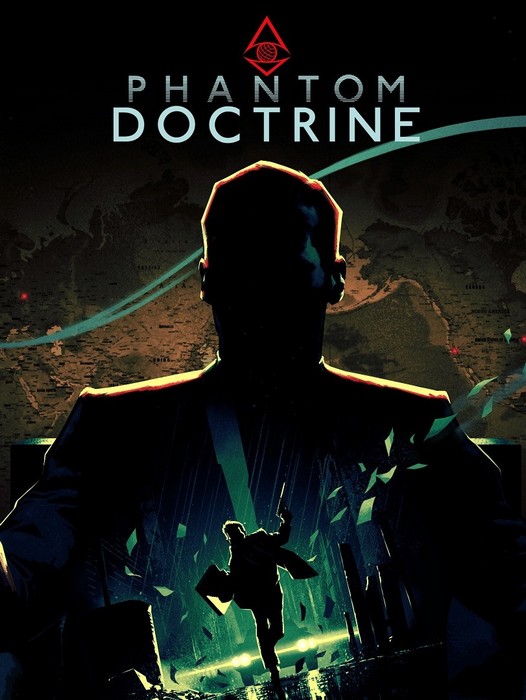 Welcome to The Cold War. We are in a middle of a tense space race where the goal isn’t much of an exploration as it is to get there before the other guys. The USA & Russia relations are at an all-time low, with suspicion and paranoia everywhere. A perfect setup for a turn-based spy RPG. I got interested in Phantom Doctrine because it just radiates XCOM atmosphere from almost every screenshot I’ve seen. The gameplay looks intriguing so all I need it a good story and this might be a perfect game to spend my summer vacation on. Let’s see how it holds up.

While the choice of playing the game as an ex-CIA or an ex-KGB agent seems intriguing, the reality is something else. I imagined I would be in a role of one “good” side, then after completion play the game through the perspective of the other side. No matter who you side with, you share a common enemy known as The Beholder Initiative, a vague and mysterious spy group just like yours. The devs certainly didn’t hold back with spy cliches, so you will find twist and turns after almost every mission. Eventually, it will be hard to keep track of who is who and who are you now fighting against. It tells a lot about the complexity and absurdity of the story where the game’s incredibly convoluted gameplay is only the second most confusing thing about the Phantom Doctrine. Speaking of gameplay, strap yourself in cause we’re going for one doozy ride… 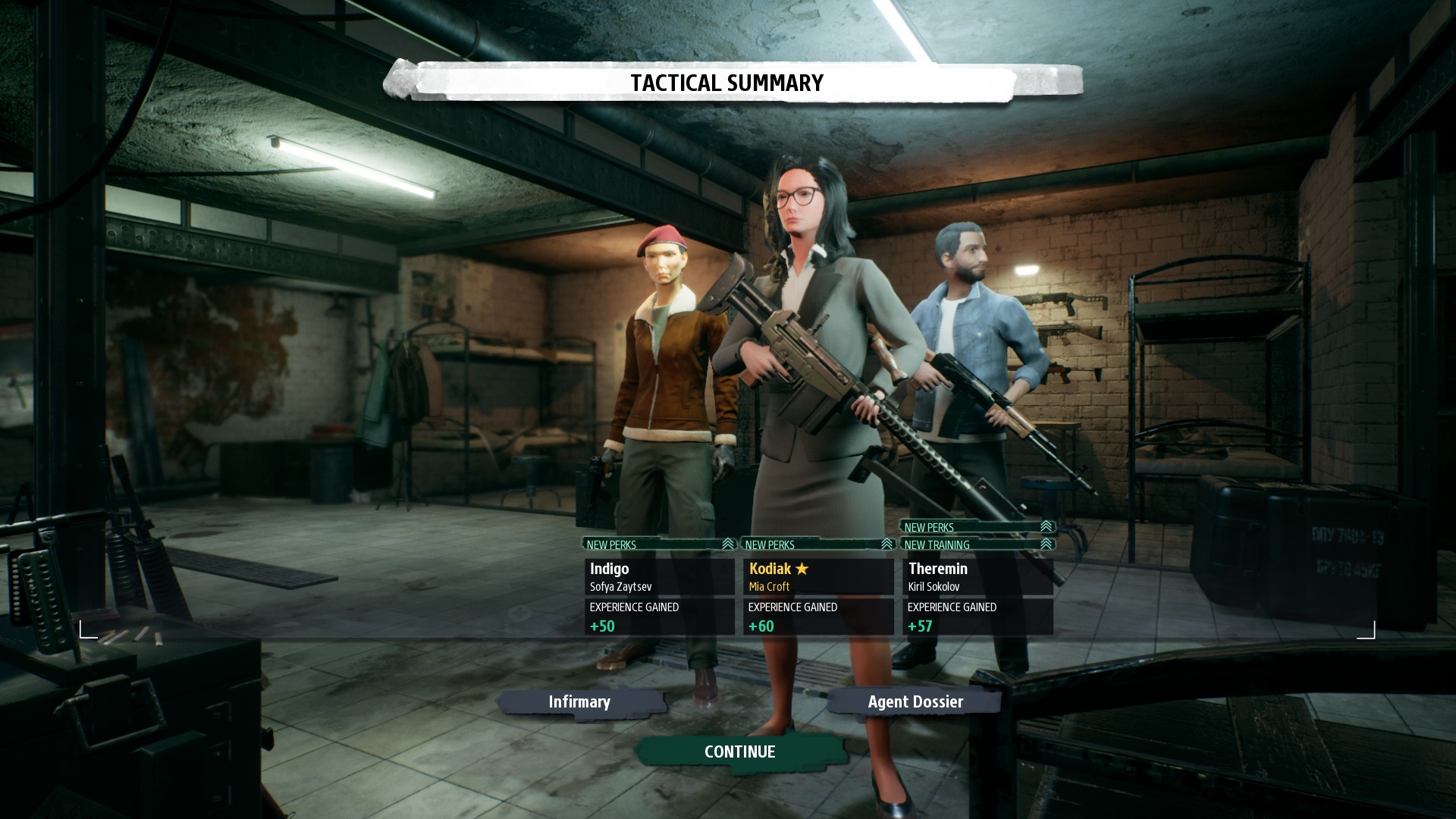 I have a friend who is a serious masochist when it comes to XCOM games. He plays almost always on Ironman mode and even goes an extra mile to download mods that will make the gameplay even more challenging. Phantom Doctrine would seem like a perfect game for him to push the boundaries of how much pain he is willing to endure. My first mission introduced me to some basics of turn-based play.  Things like attacking, hiding from enemies, taking them down discreetly, infiltrating compounds and making a run for it with stolen files. It was a short, 5-minute tutorial mission and after that, I was on my own. The second mission went in a hilariously bad fashion. Encouraged by my choice of easy difficulty and laidback tutorial, I figured this task of stealing top secret files from a base in Pakistan would be a cakewalk. And it was, up until the evacuation part. All of my three agents got gunned down in four turns, forcing me to replay the mission. I decided to be a bit more focused next time and take full advantage of my agents skills, made sure to disable every camera, incapacitate every civilian and paid close attention to the movement of the guards. While I have no issue blaming myself when playing goes wrong (Dark Souls taught me that) I could not help but to think that some things would be considerably easier with certain gameplay tweaks. One thing would be the camera. Too many times I found it pretty hard to see where the enemies are (even with rotating and checking every corner) since, in the next turn, they would pop up out of nowhere and gun me down like nothing. And sometimes the AI would be inconsistent. Guards would either go in full blind bat mode and sometimes they wouldn’t have issues noticing me from a nearby building. Phantom Doctrine is a game that requires a lot of involvement from you and rewards you with a big payout. The payout in a form of knowing you went against all odds and survived in the end, took down every guard and fooled every security system. The gameplay later expands on micromanaging your spy base, keeping tabs on an enemy organization and collecting clues in order to unravel a major conspiracy. There is also a constant danger of having an infiltrated spy in your group that turns their back on you once it is too late. Your captured agents can turn up a few days later but the question is were they brainwashed during that time and do you have now an enemy in your ranks? A neat gameplay mechanic that amplifies the paranoia of a Cold War era. Once you get tired of a campaign, there is also a multiplayer with only basic features. You can host a match or join one with no additional tuning. It feels  (and plays) like it’s thrown in the game just for the sake of being there. 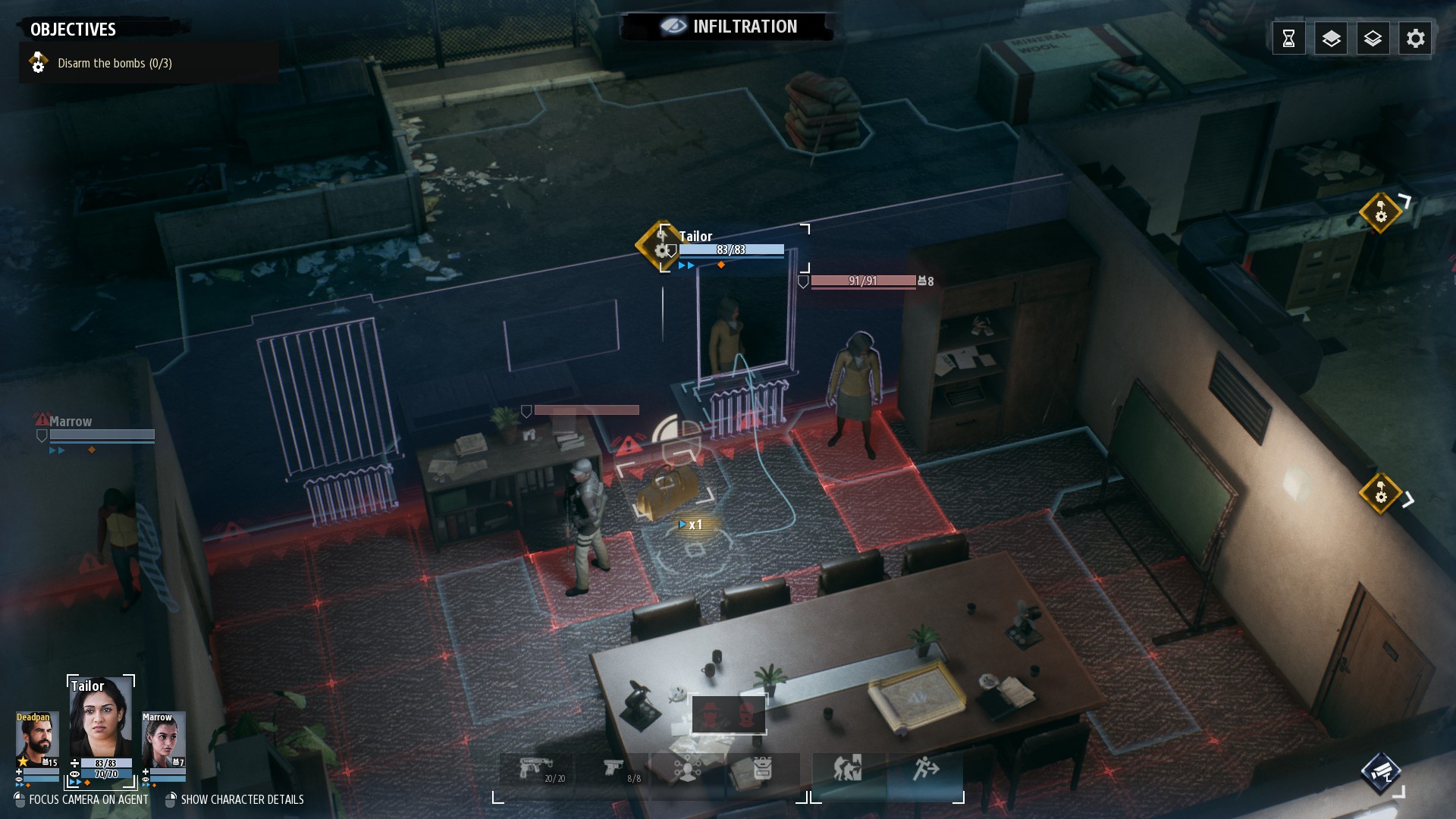 A lot of the visuals in Phantom Doctrine feel like they a couple of years behind modern games. While I liked the art style of still images in the cutscenes, the rest didn’t impress me much. Character models are grainy and lifeless and level design could certainly use more creativity (and interesting locations). It’s usually a different military base every now and then or a slightly changed building placement of that top secret facility you played three levels back. Although to be fair, there were a couple of levels where I was pleasantly surprised with vibrant colors just when I lost all hope that this game could have any. 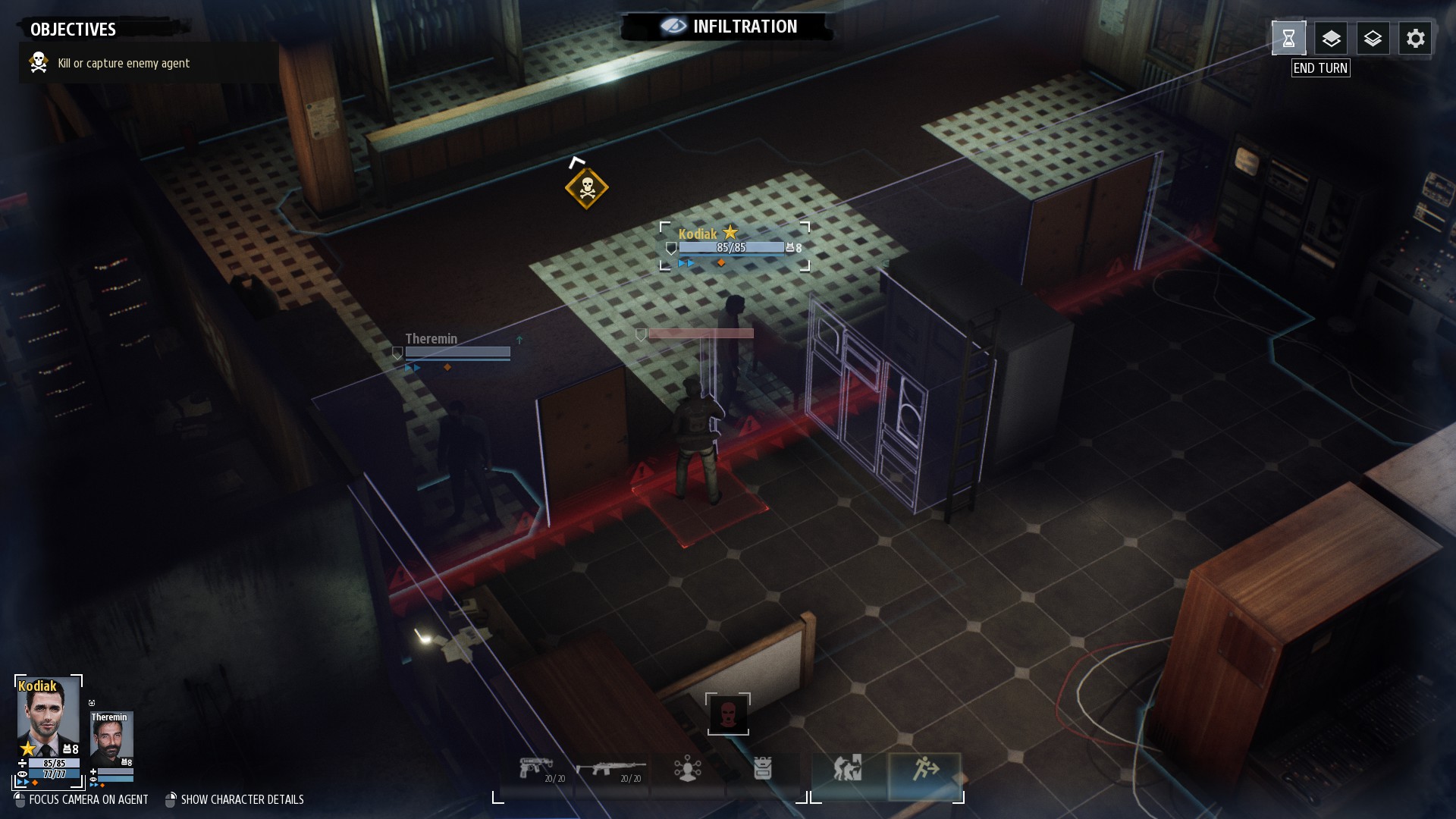 While I can’t say many good things about the visuals, at least the audio didn’t disappoint. The soundtrack is perfect from the first to the very last note. You are accompanied by a wonderful mix of tense noir jazz, eerie and ominous notes while sneaking around and even the composed environment in your base of operations offers some enjoyable tunes. On the other hand, voice acting leaves a lot to be desired with over-emphasized character dialogue and some really baffling accents. 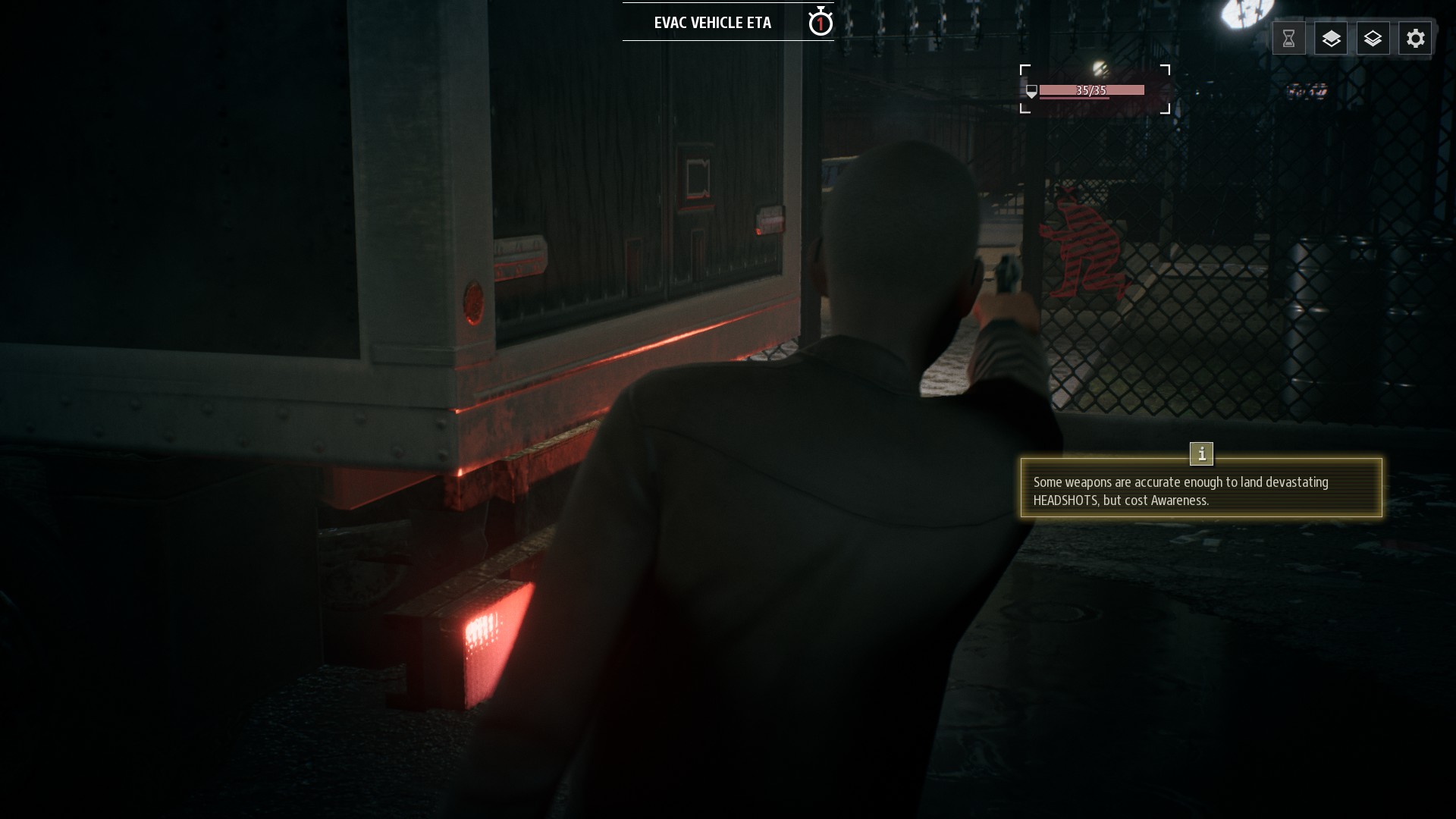 While I appreciate the Phantom Doctrine for trying to give us something new and different, many aspects of the game end up being too convoluted or needlessly confusing.  The story is drawn out, and gameplay mechanics incredibly punishing so much that they play a dangerous game with your patience.  I can only recommend it if you’re on a lookout for some masochistic experience where one wrong move can make a difference between a completed objective or a full squad wipe.

With some incredibly vague story and punishing gameplay, I can only recommend it to hardcore turn-based strategy fans.
6.5