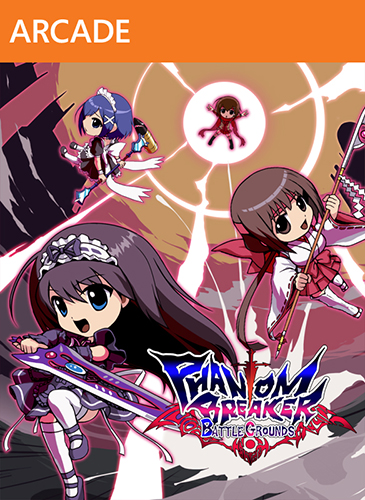 Overview:
Many people may recognize the name Phantom Breaker but may not know where they have heard of it before. Well that is because Phantom Breaker itself is a 2D fighting game that was meant to be released over a year ago, but never made it to stores. However what has made it to digital stores at least is Phantom Breaker: Battle Grounds. In what has become an interesting trend, the game has been released in the West by the original Japanese publisher 5pb. Is this unique looking 2D brawler worth your time? Let’s find out.

Story:
I find myself in a rather unique situation with Phantom Breaker: Battle Grounds’ story mode. You see, while knowledge of the events in the main Phantom Breaker fighting game isn’t required to enjoy Battle Grounds, it does provide some additional information and enhance the minimalistic story of PB:BG. That being said, while I was able to experience Phantom Breaker’s storyline, almost no one else has been able to.

Anyways, Phantom has continued to plague the cast of Phantom Breaker and with one of their sister’s kidnapped; Mikoto, Waka, Yuzuha and Itsuki set out on a mission to track Phantom down and rescue the sister while also putting a stop to his plans. However upon battling the first of Phantom’s minions, the girls are sucked into an alternate world where their abilities have been taken away from them and they must start from scratch. 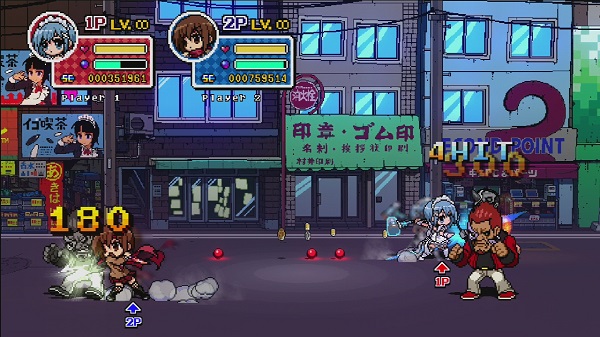 As mentioned before, knowledge of the events in the past game isn’t required to understand the storyline for PB:BG but it certainly helps. Therefore many consumers may find that the story is not only a bit confusing and vague, but it also doesn’t play a big role in the game to begin with. It is worth noting however that all story aspects are removed from the game during co-op play, so those wanting to experience the game’s story unfortunately have to play solo.

Visuals:
PB:BG has been given the old-school sprite treatment and the whole title oozes with charm thanks to this. While the enemy types may be quite repetitive, their absurd designs  such as cat-eared otaku, ganguro girls, odd looking monsters and  more, make up for the repetition. A lot of attention has been paid to making sure most of the game’s environments are highly detailed and anyone familiar with Japanese culture will probably recognize numerous jokes or areas in the game. Though it is worth noting that one stage does suffer from heavy palette swapping and compared to past areas in the game, it is a stark contrast of quality. 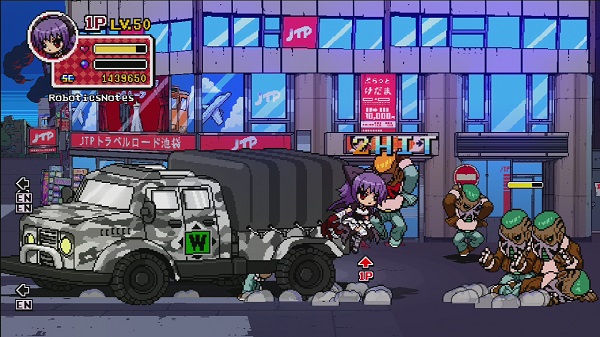 As for the characters themselves, they are presented in chibi-sprite form where they look simply fantastic. The four initial playable characters and subsequent unlockable fighters are designed exactly like their fighting game counterparts and their attack animations are fluidly handled.

Audio:
While not a major player thanks to the fact that the game’s story is lost in co-op and may confuse many, it is worth noting that the game features a Japanese voice track where characters have retained their original voice actors. As for the game’s soundtrack, players are presented in high quality old-school chiptune music which fits the game’s aesthetic perfectly.

Gameplay:
As players enter into the game for the first time they will be presented with an easy to learn combat system that actually is rather complex. There are various weak to strong attacks as well as special moves that can be performed with only a few button presses. In PB:BG there is a front line and a back line where players will be battling enemies and swapping between these lines can sometimes be essential for fighting tougher opponents. 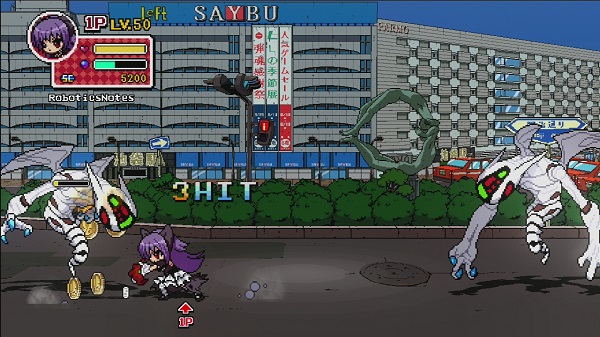 Anyways, when players first start off they are given an opportunity to use their chosen character at their strongest. They will have access to their chosen fighter’s entire move-set and upgrades; however it is merely a preview of things to come since once the first level is cleared, their chosen character will be reset to level 1 with the most basic of attacks.

The only way to gain your skills back is to defeat enemies and complete levels to earn XP. Each level up provides a set number of skill points which can be used to either upgrade your character’s speed, power, defense or unlock more of their moves. The system is handled well enough though it is worth noting that if you are playing in co-op, especially online co-op, you cannot actually apply your skill points to your character.  This means that if you were to go through multiple levels without taking a break you will be stuck with a very underpowered character. 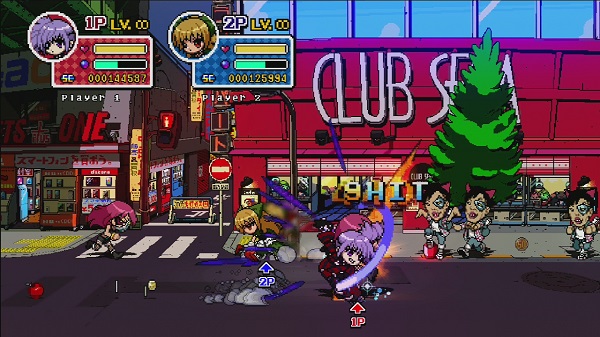 The four playable characters, Mikoto, Waka, Yuzuha and Itsuki, as well as the two unlockable fighters M and Cocoa have had nearly their entire moveset transferred over from Phantom Breaker into Phantom Breaker: Battle Grounds. This means that each character has a unique move-set that has numerous combo options and potential to juggle the many enemies you will come across meaning that while simply mashing X is a possibility, there are a lot of options available for players.

In Phantom Breaker: Battle Grounds players are given the standard story mode, four player co-op that can be both online and local co-op, though it is worth noting that the online co-op can be a bit laggy at times and since players cannot jump into an already existing game, it is sometimes hard to find three others to play with. When playing with three local friends however, the game ran flawlessly even with four fighters on the screen at one time. 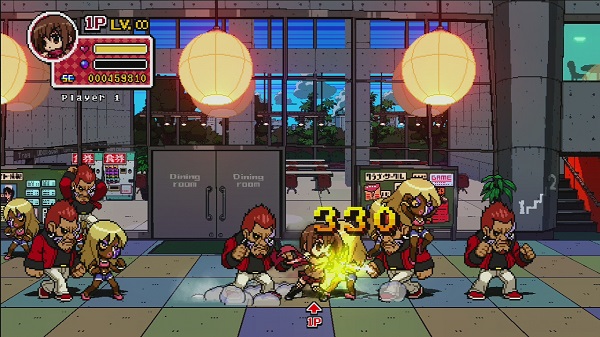 Outside of the standard arcade modes, there is a Battleground option where up to four players can choose a character and battle it out against their friends. There is also a mode that allows players to try and complete stages with the fastest time and highest score. You may have noticed that I mentioned a few unlockable characters earlier; well it is worth noting that they cannot be used in normal story mode, but they are usable in the time-attack and battleground mode.

Overall:
Phantom Breaker: Battle Grounds is an unconventional looking brawler that does have its faults, but beneath these faults PB:BG oozes with charm and a combat system deep enough to fit right in with a normal fighting game. With a decent amount of game-time available, a nice selection of fighters with different move-sets to play as and the option to play alongside friends in fast-paced combo packed combat Phantom Breaker: Battle Grounds is a fun retro-anime beat’em up  that definitely is worth a look.