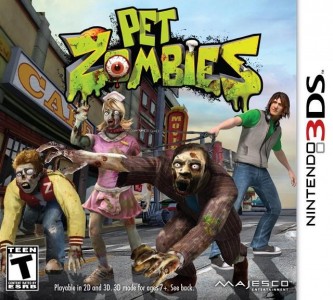 Overview
Have you ever watched a zombie movie and thought…”I wish I could have one of those!”? Thanks to Majesco and 1st Playable Productions, you now can in the newly released Pet Zombies for the Nintendo 3DS. The concept of this title is exactly as it sounds. Players get to customize, care for, and play games with their undead buddy, which is of course done so in full 3D. Yes, it’s obviously a parody of the over-saturated genre, but the question is, are we laughing with or at these re-animated pets? Here is my review for Pet Zombies.

Gameplay
The first thing you should know before going into Pet Zombies is that the entire experience is down-right bizarre…but in a good way. Starting the game up, players must choose a member of the undead to care for, which includes the likes of a jock, waitress, nerd, and several other human stereotypes. Afterwards, it’s now up to you to customize your new undead friend by picking out a skin type, with textures ranging from the classic cold and clammy look to having veins pop out of the zombie’s face. Now as cool as it is to choose how your zombie looks, changes are very subtle. Other than choosing a different colored outfit and adding in those decaying features, there isn’t a lot left in terms of appearance. I would have personally liked to see a bit more in this area, but I highly doubt many are going to have a hard time crafting one of these living corpses to suit their own personality. 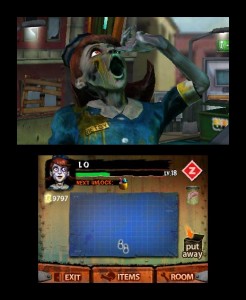 Once your zombie is appropriately named and dressed, it’s then time to care for their needs. Instead of love, players must literally torture their zombie to gain their affection. You see, the more you interact with your undead friend, the more they level up. Leveling up is more than just a number in Pet Zombies, as each time your zombie gains a level, a new item or game will become available that furthers the torturing process. This system is actually well made as gives a nice sense of progression throughout the game. Feeding also gives XP points, so players must make sure there are plenty of brains and bones to go around in order to keep their pet pleased. 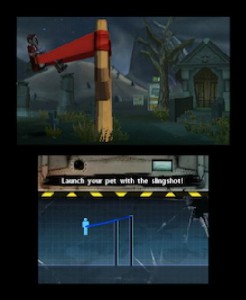 Pet Zombies features it’s own currency system known as “Zombucks”. Taking care of your zombie is never cheap, so the player will need these Zombucks to purchase nearly every item in the game. Thankfully, this is all done by playing mini-games. For example, the game available from the start is known as “Zombie Slingshot”. In an Angry Birds fashion, players must launch their friend high in the air and have them collect coins in the process. To go higher, a “Glide” meter can be hit on the touchscreen and you can have your zombie whip out a magnet to pull in harder to reach coins during their flight. The longer they stay up in the air, the more Zombucks you receive at the end. It’s a very simple formula, but I rather enjoyed this little romp in particular as it has a rather addictive nature to it. There are four other mini-games that can be unlocked later on, including the very entertaining “Dumpster Dive” and an item-flinging fare where you launch junk at your zombie’s target using the stylus controls. These are not the most innovative mini-games by any means, but each are solid and make collecting Zombucks rather enjoyable. 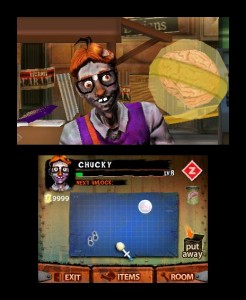 Back when I first heard of Pet Zombies, my first worry was how the AI would perform as we have seen a ton of pet simulation titles released where the animal (or dead human in this case) just sits there and does nothing unless provoked. Luckily, 1st Playable put a lot of work into making this an engaging experience and these pets are quite the charmers because of it. Most of the time, your zombie will wander around and interact with whatever object you have laid out in the environment. You can also add in an item to spice up the affair, which is where the torturing and interactive elements come in. My favorite tool was the laser pointer, as just like a cat, your zombie will go nuts chasing the light wherever you drag it. Watching a brain-hungry beast slap at a punching bag is also something you must see for yourself, as I watched my dear Bertha (a waitress) get in serious altercations with the inflatable before she eventually gave up and declared the bag the winner. Pet Zombies shines the brightest for it’s moments of humorous interaction, and there is such a large number of items to be unlocked that anyone could easily spend hours just trying to see it all.

Visuals/Audio
I have played the likes of Ocarina of Time, Star Fox 64 3D, and just about everything that the 3DS had to offer, and oddly enough, I feel that Pet Zombies has the best 3D effect I have seen on the platform thus far. This may sound like a strong statement, but the presentation value offered is just that good as it feels that the game was built for the 3D gimmick and not just tacked on later. As I mentioned, this title is a parody. Instead of running up and licking the screen like a Nintendog, your zombie will run to the screen and beat their head on it repeatedly to gain your attention. Every animation offered is just what you would expect to see from a zombie, and that attention to detail shines through with the stunning visuals in the game. There are quite a few well detailed settings to have your undead pal play in as well, and that variation assists in keeping the scenery from getting stale. 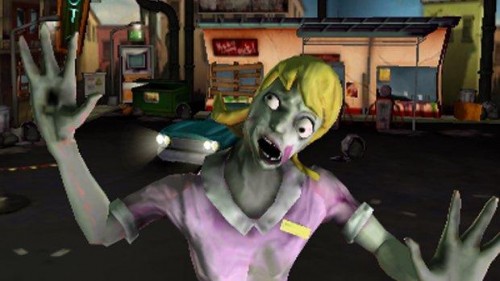 Each zombie make the groans and howls that you would expect, and all of which blend well with their pre-set personalities. Hearing your poor, living impaired friend scream when they are on fire doesn’t ever get old and the voice actors who provided these effects did a great job in making everything sound as realistic as possible. The music within however is a bit bland and usually just loops the same eerie tune, so those who are wanting an ear-pleasing soundtrack are best to find the nearest radio. I honestly don’t think that many who pick up Pet Zombies are going to hunger for a orchestrated experience, so this flaw of sorts could be easily overlooked.

Overall
At first glance, Pet Zombies looks like a quick cash-in on two over-saturated markets. Whenever you take a closer look however, all of this parody’s quirky charms and offerings soon shine through. Yes, this isn’t game of the year contender by any means, but that isn’t it’s intention. Everything is simply a jab at the genre as a whole and Pet Zombies thrives at offering a ton of laughs and “brainless” entertainment. The 3D effect works and looks both polished and eye-pleasing as no undead have ever looked this good on a portable. If you are looking to adopt a pet on the 3DS, put down the leash and grab a shovel as these Pet Zombies are worth digging up.