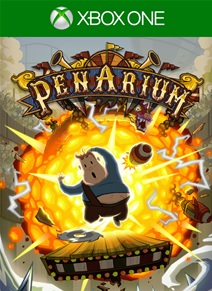 Overview
If one thing is certain, it is that Super Meat Boy brought with it a ton of clones last generation. What I mean by that is a lot of titles have decided to go with an 8-bit art style and ramp up difficulty to give gamers of today that “old school challenge”. This sounds great, but instead of receiving quality gems – we have received a ton of games that are a chore to play due to poor balancing and artificial difficulty. Not to mention a lot of these titles lack any charm whatsoever. Penarium looks to change that, taking players to the circus with a bit of something new as players now have to deal with more bite-sized challenges that are all connected rather than levels. How does this three ring extravaganza end up? Let’s find out.

Story
Penarium does have an interesting little story- even though it only serves the small purpose of an introduction to the characters you will be seeing for the experience. A young boy named Willy is curious and ends up on a circus cart, with an evil ring-leader kidnapping him and forcing him to do challenges to entertain the masses that could very well end his life. Its dark, yet menacingly charming in its own bizarre way. There isn’t a lot of depth to the tale, but much like Mario, Sonic, and so on, we get a clear idea about the story in minutes and have that one goal (in this case freedom) that acts as a reason for progression. Its simple and satisfying to say the least, and a smart way to write a narrative in such an odd little game. 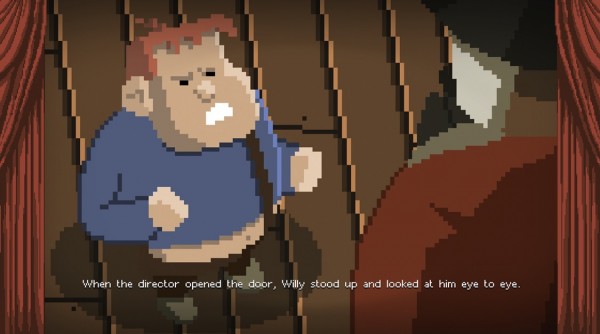 Gameplay
The first thing you should know about Penarium are the three modes. There is an arcade mode where you can compete for a high scores while attempting to simply survive for as long as possible, a nifty little multiplayer mode that allows for two player action that is rather insane and competitive, and the campaign mode which is the center ring to this circus. Campaign mode has players take part in challenges that start easy enough. Avoid projectile fire or some sort of hazard while smashing barrels. If you get enough, its onward to the next task. The difficulty however is the game’s greatest strength, and that is for more than one reason. 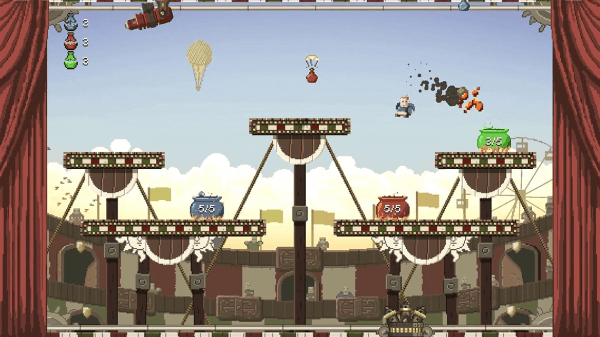 Before I continue on I must let you know that I dislike really hard games that are hard for the sake of being hard. Back in the 90’s, games were not that hard (such as Buster Breaks Loose or The Lion King), they just were unforgiving when it came to hand-holding. You had a set amount of lives and that was it. There was no push forward or nudge to do better. You either beat that hard part or you didn’t continue. End of story. Today a lot of titles like to say “I AM SO TOUGH TO BEAT! LOOK AT ME!”, and that makes me angry to be honest. I don’t want a game that knows its difficult before its even made. I want a product that is complete and fun that will allow itself to let go of our hands and learn how to overcome obstacles because we don’t want the fun to end. With that rant aside, I can say that Penarium does it right. The level structuring kind of reminds me of WarioWare in minor ways as the levels are short and over quick, but the game is still fun as the objectives are easy to grasp and this title makes it seem as each task were a carnival game of sorts. Each section is a learning experience, with the game leaving little time to master one mechanic before introducing another. 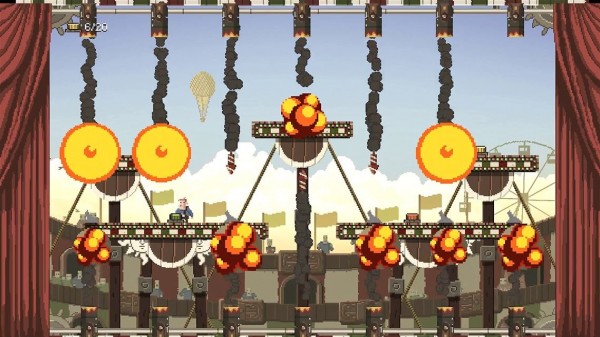 Catch potions, put them in a pot by their color. You let too many drop its game over. Smash barrels, collect coins. Avoid enemy fire and hit switches in sequence with chaos going on around you. Those are just a few of the factors that go into Penarium being a blast to play, and even though it is hard as nails and will make you question life, you will still enjoy yourself as you will want to get to that next game. I never had a bad time as the controls were tight and fluid, and everything was so simple that I knew the flaws I had were caused by my own bumbling during the game. That being said, I wish there was a bit more variety overall and a little more done with the general theme of this design, but that is really just me wanting more and not actually barking about any real frustrations. Those who want a bit of help can cash in their loot to get power-ups that work well enough as well, and while they won’t shrink the difficulty, they do add to the chaos in a good way.

Visuals
If I have to mention one negative about Penarium it would be the visuals. I know, some will love those charming, 8-bit pixels. I feel that the look is getting over-saturated and at this point is like a red flag for a more mediocre product. You’ve got a good story, the gameplay is fun, why not go all out with these designs and make them modern, rather than go for a look that is just going to capture a crowd who will probably snub their noses at the concept? Colorful models and worlds are great, but the 8-bit look makes this world look rough and jagged when it should be a little more appealing. I am sure the look is 100% intentional and wasn’t meant to be a shortcut, but I took it that the developers said “Oh look, our game is hard, lets make it look like older games that were hard!”, which is a bit sad to see in an otherwise fantastic product. 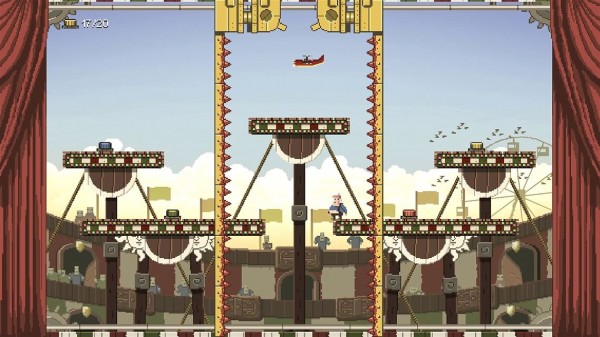 Audio
The music is quite swanky and fun. While not all the tracks are upbeat, they do go with the circus theme and even the 8-bit look hand in hand. Yeah, I guess the music does remind me of games of yesterday – but I am ok with that as this collection of tunes were done right. The sound effects are also great, giving off that satisfying chime of a coin collected and smash of a barrel. I don’t what it is about those two sounds (other than the throwback to Donkey Kong Country and Mario), but I always enjoy that little detail in games both new and old.

Overall
Penarium is a fun little adventure that comes with polished gameplay that is cruel, addictive, and fun. I think that last word is a big part of of the experience, as its rare to have a blast in a test of wits. The story is also lovely despite its one dimension, and the extra modes give a good bit of life to those who are ready for even more challenge. I think we will continue to see clones of Meat Boy and the like for years to come and sigh as developers miss the point, but gamers should know that Penarium is its own fantastic product, hidden underneath a pixel look that hides the wild circus underneath.