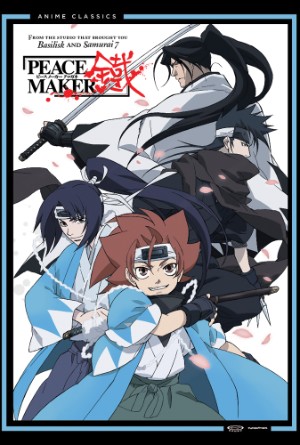 Overview:
Have you ever thought of becoming a samurai? While most of us may wish we could simply because of how cool we think they are, but real samurai had much deeper reasons for picking up their swords. Such is the story of Peacemaker, an anime which was originally released in Japan back in 2003 under the name Peacemaker Kurogane. The series itself was based off of a manga which was created by Nanae Chrono.

Now while Peacemaker may have been released back in North America in 2004, FUNimation has recently released the entire series bundled in one package under their Anime Classics label. Does Peacemaker’s tale of swords and a young boys journey to find his true purpose tell a memorable story so many years later?

Story:
The story for Peacemaker takes place just before the Meiji Restoration in Japanese history. Viewers follow the story of a young boy named Ichimura Tetsunosuke who wishes to join the Shinsengumi, a force of samurai that act as the special police force of the area and are the first responders to anyone causing trouble. Now while some members of the Shinsengumi do this to uphold justice, Testu has another force driving him.

This fifteen year old boy watched his parents murdered by a Choshu Clan rebel two years before and his house burnt to the ground. In an effort to become strong and obtain his revenge against the Choshu, Tetsu wishes to join the Shinsengumi. The reasoning for this is that the Shinesengumi are constantly in conflict with the Choshu Clan, meaning if Tetsu is able to join the ranks of the Shinsengumi he may one day be able to take his revenge. Which is why when his peaceful older brother named Tatsunosuke joins the Shinsengumi as a bookkeeper Testu feels that this is finally his chance. That is of course until his small stature and course attitude get him quickly turned away. 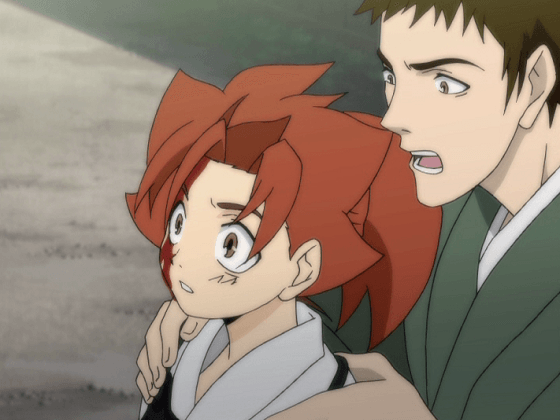 Thaty is until he meets the first unit captain of the Shinsengumi, master swordsman Okita Soji who gives him a chance to prove his skills and join the group. After being eventually allowed into the group Tetsu learns that rather than being placed on the front lines against the Choshu, he is to be a page for Hijikata Toshizo, second vice-commander of the Shinsengumi. This frustrates Testu at first but he falls into place doing menial chores for Toshizo.

The series progresses from then on as Testu begins to train as a Shinsengumi and one day obtain a rank that will allow him to become a full-fledged member and find his revenge. Along the way Testu grows closer to the various members of the Shinsengumi and eventually develops friendships with a few of them. But the biggest question remains, when Testu finally does become a sword wielding member of the Shinsengumi will his blade turn towards vengeance or keeping the peace?

Peacemaker’s story has plenty of potential and is overall a relatively enjoyable show but there are a few problems which hold it back from being great. There are plenty of characters that can be talked about and most of them have some of their back stories revealed, but in the end the stories are usually always depressing in one form or the other and the many of the characters will simply seem like emotionally distraught people carrying swords around.

While the character’s emotional issues can be a problem, Peacemaker is still an interesting tale set in one of the most violent times in Japan’s history. Many of the members of the Shinsengumi are based off of real members in history and even Testu was based off a real swordsman during that time period. Watching the young Tetsu struggle to find his true purpose and grow close to the various members among the Shinsengumi is the highlight of the series. His moments of character development are relatively slow but are meaningful when they come about. 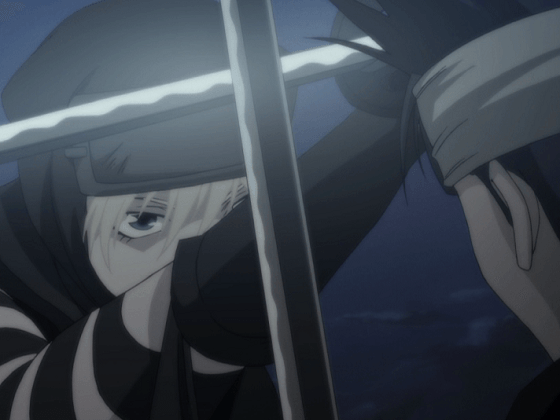 From the description above it may seem like Peacemaker is a story of dark pasts and deep wounded emotions but there is still a small vein of comedy thrown in. While most episodes are focused around serious developments, there are also pure comedy episodes thrown in on purpose, usually involving Tetsu of course. Watching the historical members of the Shinsengumi in comedic situations only makes things more amusing, especially when you remember that this was once one of the most feared forces in all of Japan.

Graphics:
The studio behind the animation for Peace Maker is Gonzo which should tell you roughly the level of quality that you will be in for. The studio’s reputation for making samurai anime precedes itself, with Peacemaker actually being made a few years before their other samurai shows Samurai 7 and Afro Samurai. The action is always very well drawn and viewers will be astonished by the choreographed swordplay at times.

Honestly the action sequences with heavy combat between various sword fighters are some of the best experiences you can have with Peacemaker. The animation is very fluid and I couldn’t determine any significant non-intentional drops in quality which is always a plus for a series with heavy action such as Peacemaker contains at times.

Audio:
Peacemaker may be one of the few anime where an English viewer may prefer listening to the Japanese dub and reading subtitles than listening to the English voice work. The Japanese voice cast does a great job portraying their characters and many of their personalities fit perfectly. Especially if you happen to recognize some of the voices. 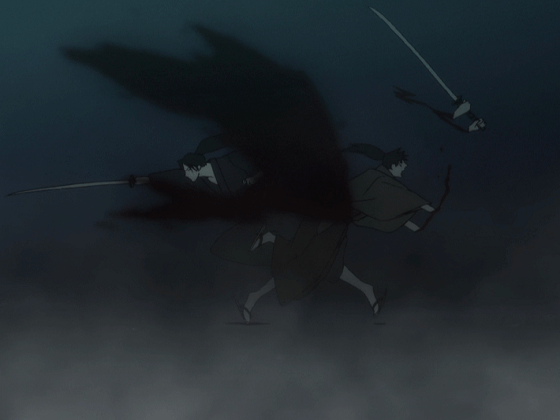 On the other hand the English voice cast just didn’t seem to come together well. Many of the characters receive rather strange accents which are noticeably fake and unfitting for the series. There are also a number of southern accents thrown in which just doesn’t fit the show and ends up being distracting in the end. Still, if you have to watch the show in English the dubbing could always be worse.

The series’ sound effects are well done and the sword clashes sound as one would expect, while the background music is usually extremely fitting and perfect for the mood. The opening song “You Gonna Feel” by Hav is more of a rock song with a couple English phrases thrown in that most viewers likely won’t remember nor wish to listen to every episode and only seems to match the opening animation half of the time. The song’s only saving grace is the fact that the rock sounds appropriate for a show involving decent amounts of combat such as Peacemaker. The ending song “Hey Jimmy!” also by Hav also contains some English lyrics mixed in with the Japanese but feels more than a little out of place, though the ending animation is all black and white animation which makes the ending sequence as a whole feel rather weak in general.

Characters:
There are many historical and famous members of the Shinsengumi which are alive and well for Peacemaker and most of them are relatively historically accurate. This includes their personalities that were written down in history books and things similar. The historical accuracy will be a major plus for anyone who has knowledge of Japanese history. Plus each of the side characters is very unique and their personalities are another highlight which will make watching most episodes interesting. 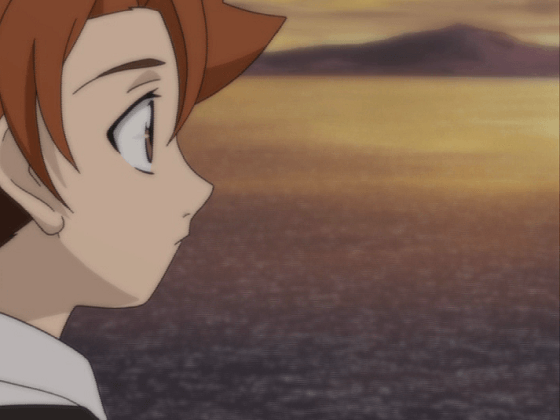 On the other hand we have the main character Testu who is a rather big disappointment at times in the series. Sure he may be portrayed as a brash teenager who has to grow up quickly and seeks out revenge, but his shortcomings (pun not intended) are quite abundant. His attitude may play well for the comedy aspects of the show but he is extremely loud mouthed at times, and a puddle of tears the next when he falls short of his goals.

Extras:
As far as bonus features go, there are your standard clean opening and ending animations as well as trailers for FUNimation past and upcoming releases. But there are also a number of other bonuses as well; these include some character spots, sketches and Japanese TV commercials. A few of the character spots are subbed which is a plus, but the commercials are rather lackluster.

Those bonuses are all on the last disc, the other three discs each contain one episode summary from the voice actors from the show. Now don’t let your ears deceive you, a number of the actors mention the show being an ADV release and that is because FUNimation acquired the license after ADV was shut down a few years back. The commentary is actually very funny and may have you laughing more than the original episode itself, making them great bonus features.

Overall:
Peacemaker is a very enjoyable series for the most part. It is a bit of an older series but that doesn’t mean that it is a bad thing. The series has wonderfully animated battles and overall has a great aesthetic to itself, although the English voice cast is something that most people may want to avoid due to the oddity of their fake accents.

Still the historical nature of the period the anime takes place and the relatively historically accurate Shinsengumi makes this a series that is great for people who are fans of samurai and battles with swords. There is just enough character development and humor to keep the show interesting for those who care more about that than sword play, but still the series takes a long time to evolve past that. Regardless Peacemaker is an interesting take on the Shinsengumi and on a teenage boy attempting to avenge his lost parents.

I give Peacemaker: Complete Series