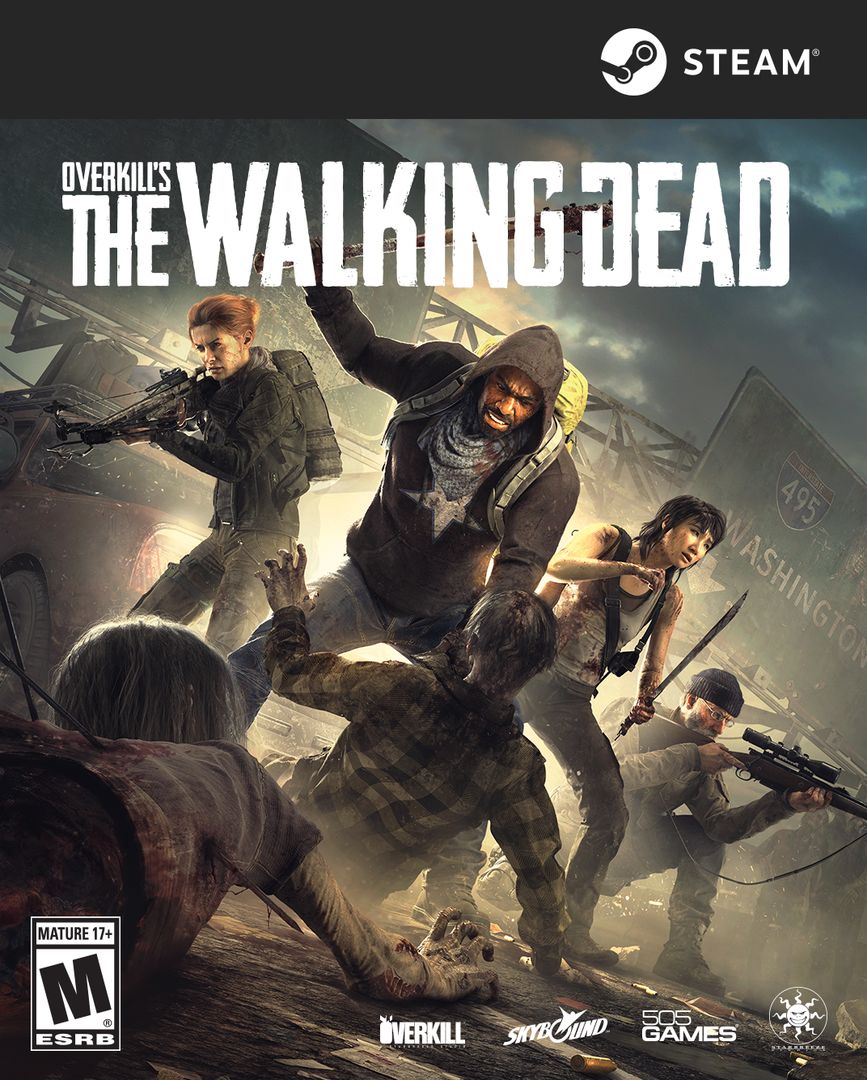 Overkill’s The Walking Dead comes from PayDay veterans Overkill. Part of The Walking Dead’s canon, players head out to Washington D.C. where a group of survivors are eking out a living. Up to four players will work together to scavenge supplies, fight the undead, and deal with ruthless human enemies.

Players play Maya, Grant, Heather, and Aiden, four members of the Anderson Camp. The game’s first season kicks off with the camp’s not so friendly neighbours attempting to extort protection money from the camp. It turns out the living are even worse than the dead. The Family are not the last of the Anderson Camp’s troubles as a greater threat looms in the distance.

The multiplayer nature of Overkill’s The Walking Dead doesn’t leave much room for a deep story, but the game still manages a decent tale. The story maintains a dark feeling throughout. The characters are chatty, and there aren’t that many lines for specific situations. As a result, you will hear the same few lines in a level. While the game has a lot of lore collectibles scattered around the levels, I am disappointed to see there is no theatre mode to rewatch cutscenes. I found myself missing out on cutscenes due to the need to hop into games quickly and the common black screen glitch that prevents cutscenes from playing. 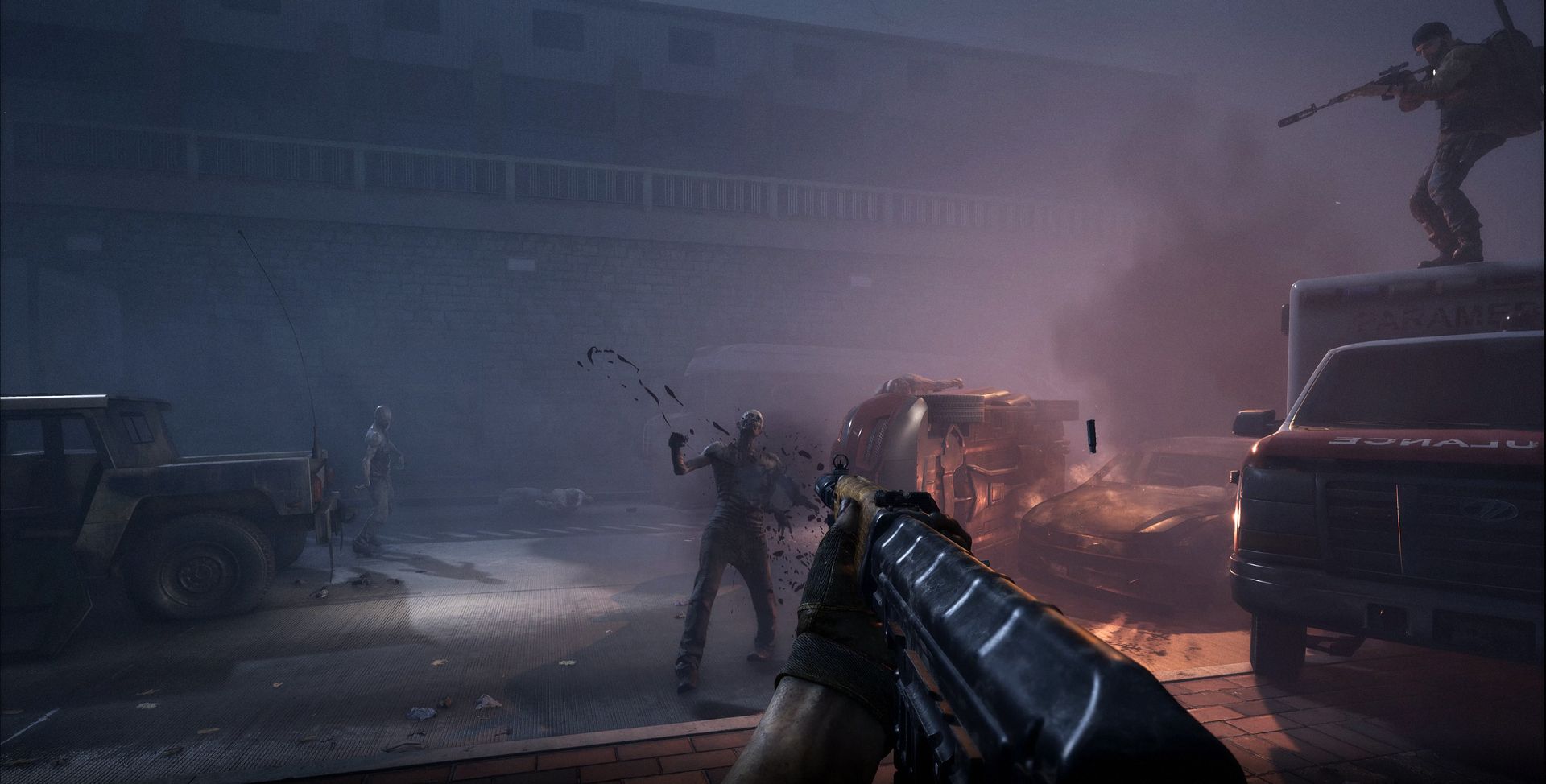 Overkill’s The Walking Dead builds upon PayDay 2’s basic four player co-op gameplay and layers on game mechanics specifically designed for the zombie apocalypse. The Walking Dead has the potential to be a serviceable co-op shooter some day like PayDay 2; however, the game’s current condition is far from ready. The gun balance on its own is just passable, but the character skills system makes it worse. Each character has skill bonuses for a type of melee, secondary, and primary weapon; however, those types of weapons are not always the best tool for the job. For example, camp defense missions against gun-toting humans make crossbows and bolt action rifles utterly useless, putting Grant and Heather at a disadvantage compared to Maya and Aidan.

Each character levels individually. Although they all share the same Core Skill Tree, spent points do not carry over. While this initially felt unfair, I soon noticed that the XP rate is quite generous. I found camp supplies to increase the camp buildings was actually the bigger bottleneck.

The level design is disappointing. Several maps are used repeatedly with minor adjustments and different enemy. While there are a lot of missions, the overall number of actual levels is quite low. The defense missions involving human enemies are an exercise in frustration, especially the two set in Anderson Camp. I like the idea of random variation in map objectives and wish there was more of it in game. Many maps will have two or three variation of a single major objective, but most boil down to the same collect some items and jam it into the right slot to proceed.

The game’s difficulty level is frustrating. The zombie mechanics make playing with random players tough. Ammunition is a bit limited and the zombie spawn rate increases as more noise is made. Some noise is controllable by using melee weapons and suppressors, while some aren’t, such as human enemies firing their weapons. Noise level is a permanent increase for the rest of the level and suppressors break after a certain number of shots, so zombie spawns can easily snowball into a horde if a player with poor aim decides to fire at everything that moves. I am not a fan of how headshot difficulty for living enemies increases as the game progresses. Later levels are swarmed with helmeted enemies that make one shot kills to the head very difficult for weapons completely reliant on those types of kills. 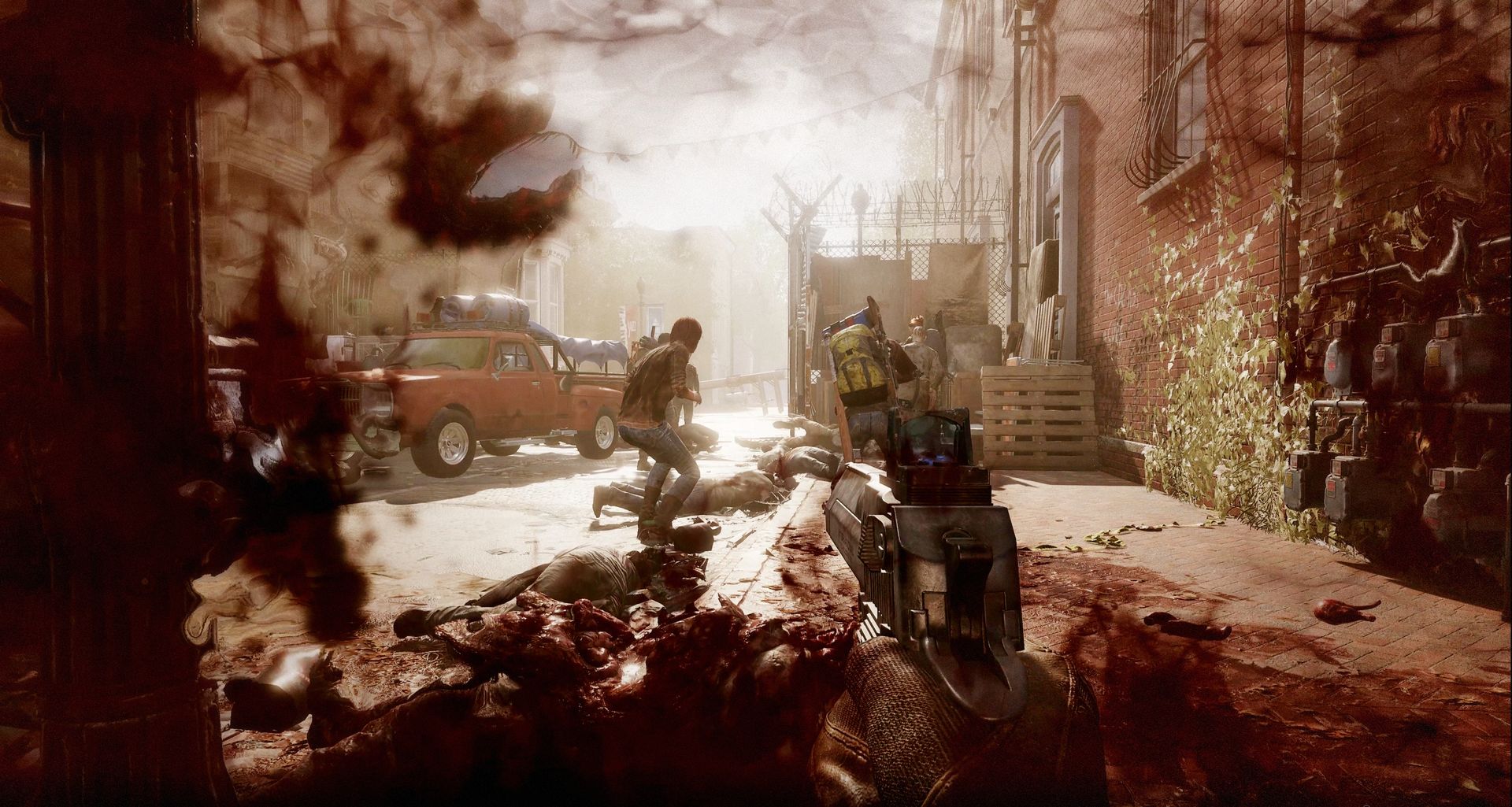 Noise management and suppressors could use a bit of an overhaul. Suppressors are incredibly valuable, so I would have liked some better control over their use. If the gun is modded with a suppressor, the player will only get one for the entire level. If it is not possible to craft or find replacements within the level, I would have preferred the option to temporarily remove the suppressor. There is no point wasting valuable suppressor life when engaging in an all-out gun battle against human enemies.

The camp is a decent distraction between maps but needs to be organized better. The more common activities are available within the menus. The survivor missions are a good way to spend extra resources to top up ones you may be short on. The ability to stack high level survivors in buildings for reasonably helpful in-game bonuses is a plus. The major annoyance is the in-game camp map. In general, the map is pointless considering the services it offers. The shop, bank, and quest manager could all be moved into the game menus. I would have preferred a shooting range in the camp to help players get a feel for new weapons and learn how to aim the crossbow instead of learning on the job.

The game is buggy and needs a good bit of optimization. NPCs trying to follow players have problems pathing down jumpable objects and climbing over anything above knee height is almost impossible. This makes the rescue Reina mission a huge pain. Hitboxes on stairs feels off compared to flat ground. I’ve seen other players suddenly float a meter into the air for no real reason. Cutscenes randomly do not play between levels. Loading into levels takes forever, which is tolerable if the game was fully loaded by the time the player spawns into the world. Instead, I always found myself thrown into the world with severe lag and texture popping for the first 30 seconds while the game finished loading. Things lock up again every time a new player loads into the map in the middle of the match. Considering this game is so melee heavy, these lag spikes can be a death sentence. Things have improved a little since release, but the game is still far from perfect. 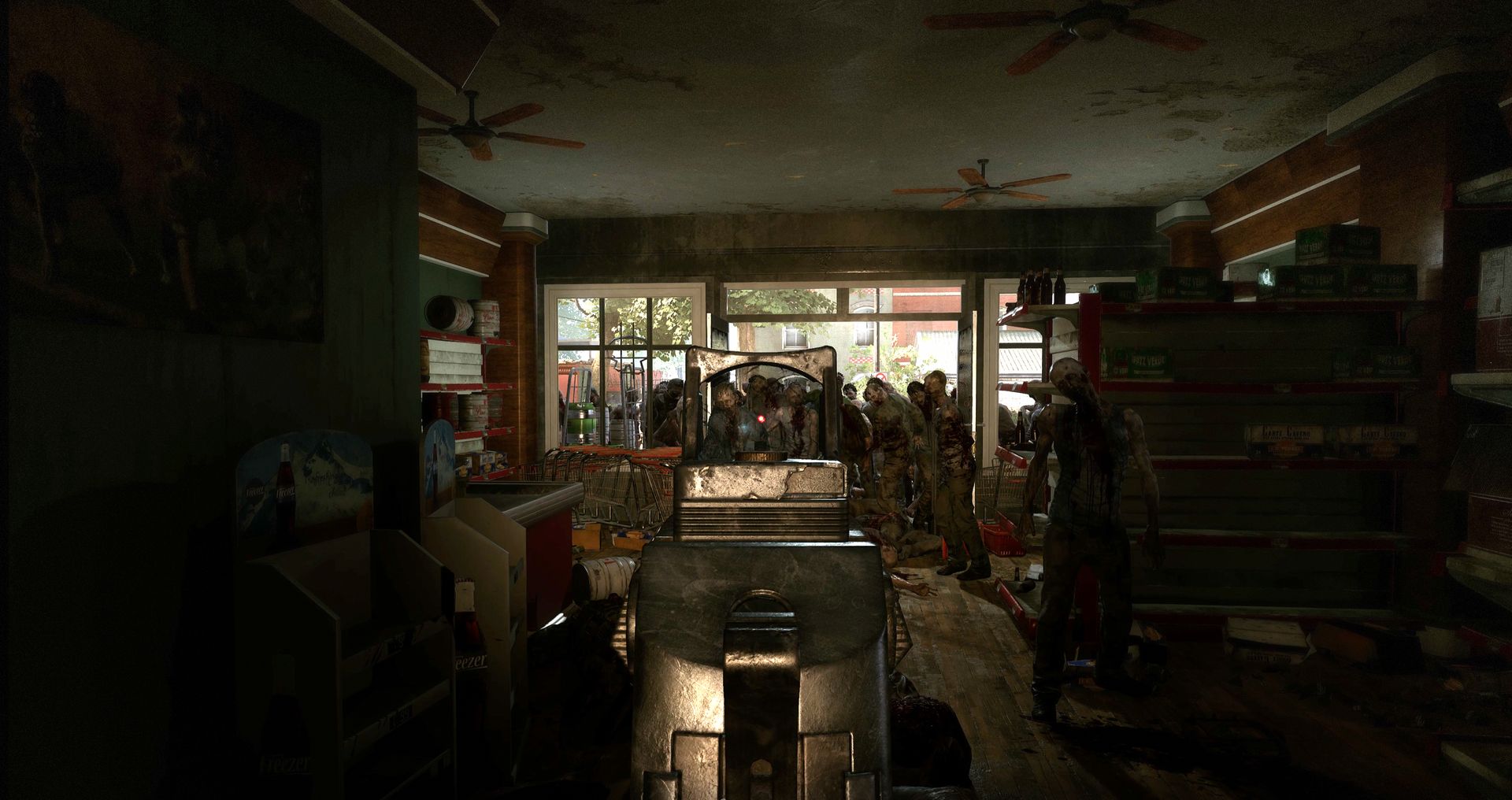 Overkill’s The Walking Dead looks very dated. The player character models and textures are low resolution. There’s a shortage of NPC textures, as the zombie hordes generally look the same and armoured tanks share the same zombie style innards texture on the back no matter if they are alive or the living dead. The environment looks a little more modern, but several levels are lightly modified variants of each other. The firearm animations are decent, but hand and melee animations look unnatural.

The audio experience is decent. The music works well for the game. The sound effects are good. Voice acting on the other hand is a mixed bag. Main characters tend to be higher quality, but still fall short of a proper AAA performance. The minor characters tend to lack both quantity and quality. 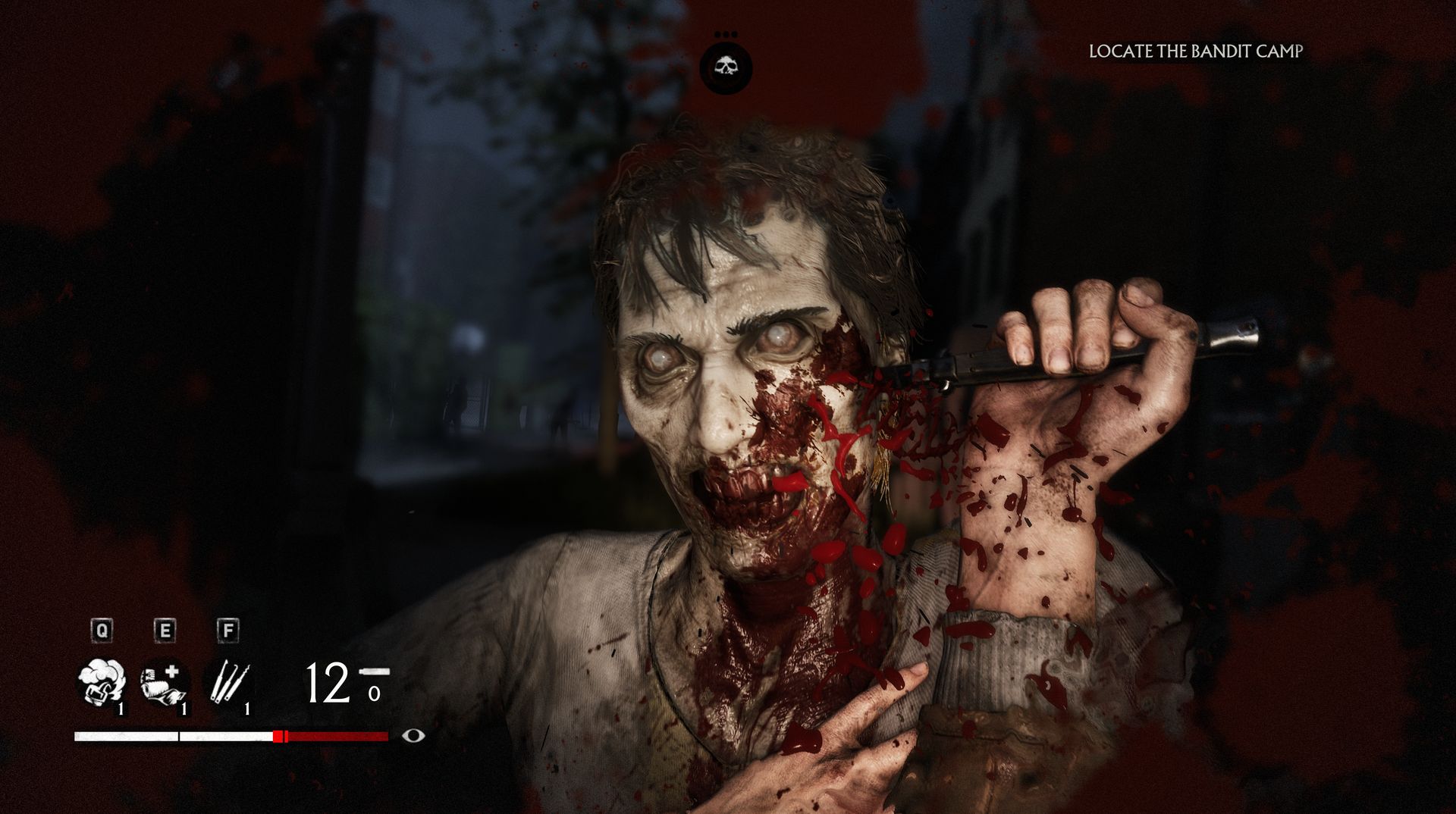 A game that feels like it was rushed out of development. It falls well short of potential due to lack of content, a few poor design decisions, and bugs.
5.5