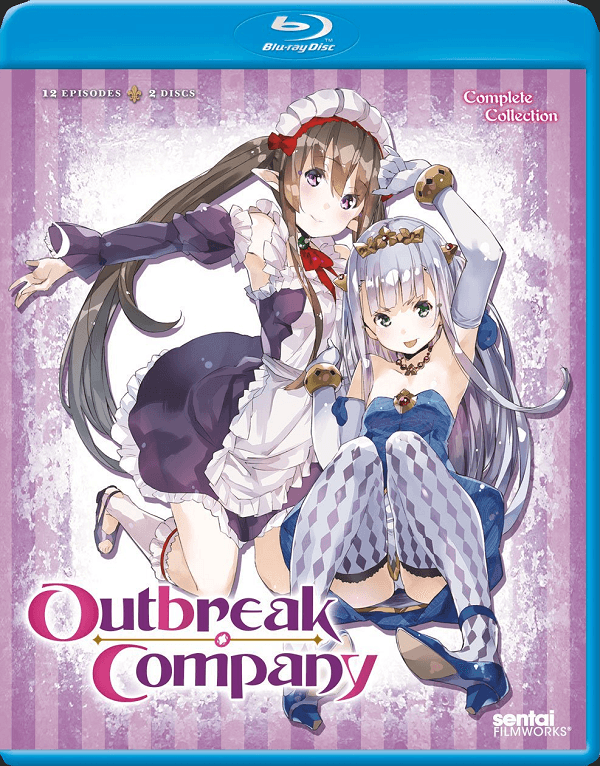 Overview
History has shown that whenever a new country is discovered, the natives usually have issues trusting the newcomers. This usually leads to various altercations and war eventually breaking out between the two forces and there are a handful of stories that take that situation and put a fantasy spin on it. Such is the case with Outbreak Company. With the Japanese government discovering a portal to a parallel fantasy world filled with magic and different races, Outbreak Company takes this idea on with a novel approach but is it one worth watching?

Story
If there was ever a way to identify the most hardcore otaku, the Japanese government certainly found a way to accomplish it. The son of a light novel writer and an eroge illustrator, Shinichi Kanou is a shut-in that knows practically everything there is to know about otaku culture as he spends hours watching anime, reading manga, and playing games. So when an extremely difficult job questionnaire appears to test his knowledge, he managed to answer every question correctly. 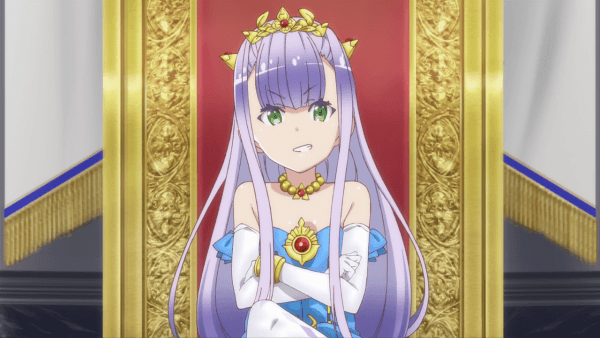 Little did he know that, thanks to his knowledge, he is now the Japanese government’s head man in dealing with a highly classified secret. Drugged and smuggled into a fantasy land predominantly ruled by the Holy Eldant Kingdom, Shinichi is put in charge of a company that will work directly with the citizenry and empress in order to spread the values of Japanese culture in the form of anime and manga. Shinichi quickly gains the support of the teenage Empress Petralka but due to the nature of the world where classism, racism, and illiteracy run rampant, this strange task is far more complicated than it may seem.

Despite appearances, Outbreak Company is a surprisingly well-thought series that came as something a surprise back when it aired in Japan. The reason for that surprise is that the idea of introducing everything moe into a fantasy world was not only handled impressively well despite sounding ridiculous but had quite a bit of depth to it and that depth comes from Shinichi trying to change the prejudices that persists in the world against the other races, including elves, dwarves, lizard-people, and treated worst of all, half-elves. 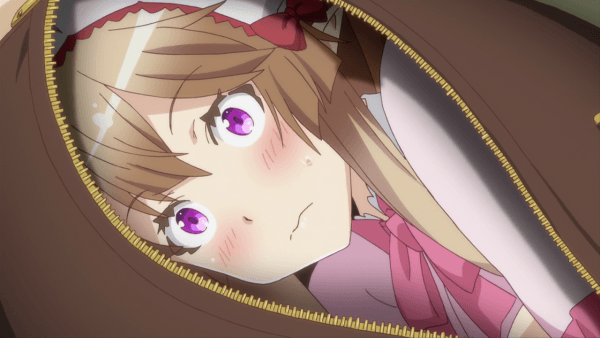 These attempts to try and sway deep-seated beliefs are smartly written in part because despite Shinichi believing the best in people, even a fantasy world isn’t perfect. While trying to establish a school to teach everyone, including the poor, how to read and write he is attacked by a small terrorist group calling him an invader threatening the ideology of their ancestors or later when trying to quell anger between the elves and dwarves in his class an organized soccer match devolves into a warzone littered with broken bodies as his poor judgment of how sports actually play out compared to what he knows from his anime.

Despite these miss-steps though we continue to see Shinichi persevere and make small steps towards success. It is in these successes through failure that Outbreak Company really clicks, especially in regards to the development of the co-heroines and their relationship with Shinichi. Myucel, Shinichi’s half-elf maid, begins the series hiding her parentage in fear of being punished as well as illiterate but over the course of the series Shinichi teaches her Japanese and treats her as an equal, resulting in many touching moments. 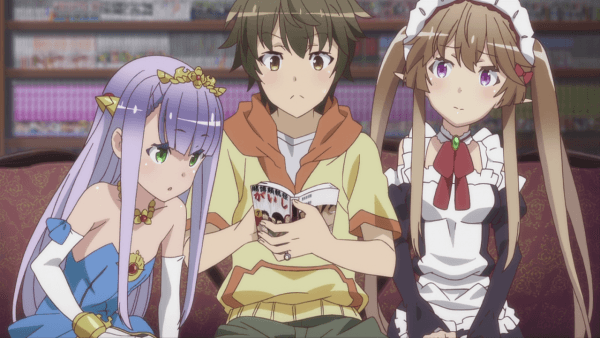 Empress Petralka sees Shinichi as one of the few people who sees her as something more than just a leader and actively seeks out his attention while trying to impress him with her knowledge. She undergoes the most change as she is first treats Myucel as a dirty servant with no rights to working together with her, treating her as a friend, and celebrating with her in a manner that will likely shake up the previously held caste system.

Now it is worth noting that another thing that makes Outbreak Company is its brand of comedy and sheer amount of references. Not only is the series rather self-aware as characters often mention the various tropes that pop up, there is a nice mix of sight gags as well as plenty of misunderstandings of otaku culture, poking fun at various fandoms, and the absurdity of some of the things Shinichi and his bodyguard Minori try to teach. One of the first things Shinichi tries to teach younger members of society about is zettai ryouiki (absolute territory) and progressing from that to the enticing thought about whether someone is wearing underwear or not while Minori’s obsession with everything Boys Love has her more than eager to teach students, especially since she quickly manages to turn Petralka’s cousin and knight Galious into a fan of BL manga. 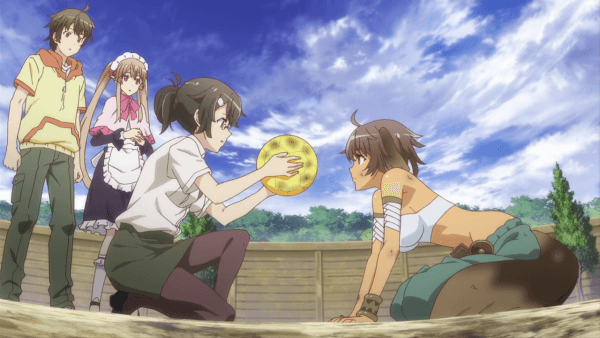 Near the end of the release, Outbreak Company takes on a more serious tone as it explores why exactly Shinichi was chosen for his role and why Japan is so interested in making sure that the people of Eldant become obsessed with otaku culture, especially since there are many different ways to try and invade a nation that don’t require the spilling of blood. While these various influences are noticeable and hinted at at times during the series, the sudden shift in Shinichi’s realization about what he is actually doing serves as a way to try and wrap things up to end the season. This late shift does suffer from feeling rushed but also answers many questions that were hanging about in a fairly satisfying manner.

Visuals
By taking place in a fantasy setting, Outbreak Company features a different mixture of lush looking landscapes and fantastic looking pieces of architecture, such as Petralka’s castle while also mixing in a number of modern buildings that are far less impressive but are touched up in their own way. You see, since Shinichi is trying to spread otaku culture, most of the in-door sequences at his residence or at the school are filled with posters, figures, life-size character cut-outs, and manga. All of these titles that are shown are references in some way or another to another series and it is enjoyable to see just how many you can recognize, though it is worth noting that most of them have been given slight alterations, usually with different colored hair and clothing, 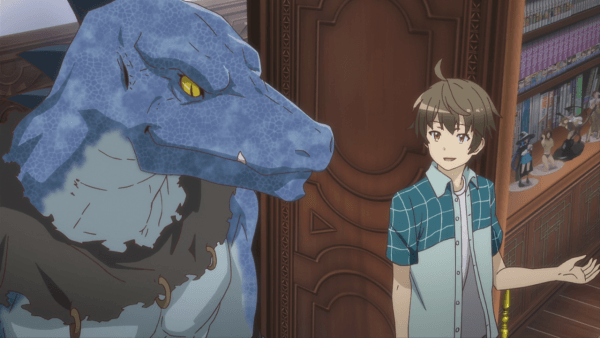 As far as the characters go, they are fairly well designed with Myucel, a werewolf girl named Elvia, and the various fantasy races standing out the most. The more conventional characters are given fairly predictable looking designs which is unfortunate. It is worth noting that since there are so many references to other anime series in the dialogue and through character actions, that Sentai Filmworks has included a large number of notes that appear whenever a certain action or line is referencing a popular series which is a nice touch.

Audio
With the release of Outbreak Company Sentai Filmworks has included both the original Japanese voice track as well as a newly recorded English dub. The English voice actors are a decent fit for the cast, with Petralca’s voice actress Kira Vincent-Davis and Myucel’s Juliet Simmons performing their roles especially well but unfortunately the dub isn’t the strongest sounding as the Japanese voice track does seem to fit best during certain sequences. 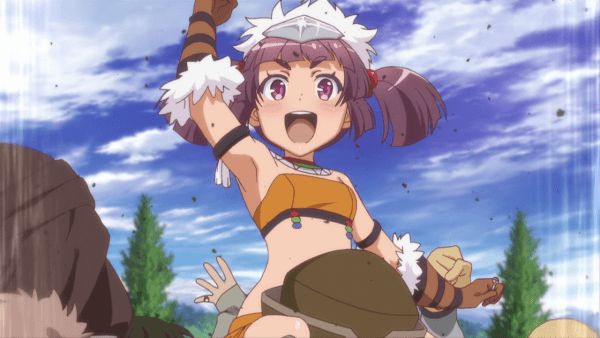 The sound track is fairly expected for a series such as this one though I must mention a certain simple sounding bit of music that plays whenever something awkward ends up happening. Whenever this short track plays it makes the scene feel even better simply due to the way it sounds. The opening theme is “Univer Page” by Suzuko Mimori is a fitting fantasy pop song while the ending theme “Watashi no Houseibako” is a bit slower paced and is sung by Petralka’s Japanese voice actress Fuchigami Mai.

Overall
Although it may have a strange sounding premise, Outbreak Company is a surprisingly intelligent series that finds a nice balance of humor that comes in many different forms and drama that touches upon serious issues in a fantasy land. Outbreak Company celebrates otaku culture while also taking plenty of humorous jabs at various fanbases and relishing in its tropes, creating an entertaining and very enjoyable series that any fan, especially hardcore anime fans, will enjoy.