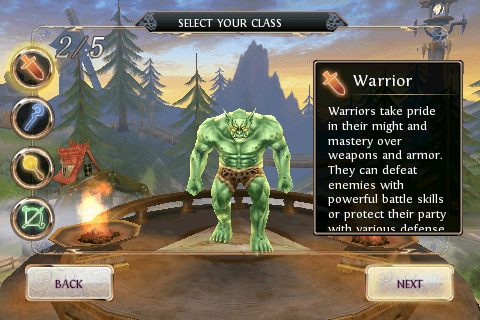 Time to pull out your iOS device and immerse yourself in the wonderful world of Order and Chaos Online. Gameloft’s latest is the first true real-time, completely three-dimensional, MMOPRG for iOS. Order and Chaos Online allows you to complete a huge amount of quests, gain skills, socialise online, join parties and guilds, fight a massive amount of enemies and generally have some good old fashioned fun. 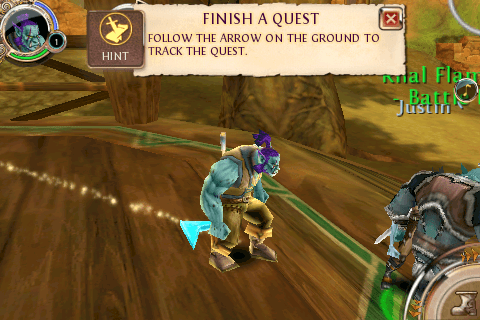 Order and Chaos Online is a fairly simple game to get used to. To move around you only need to put your finger on the left Hand side of the screen, and a button will appear to dictate movement. To look around, pan across the screen or choose character direction you need only to pinch or slide your finger along the screen. A feature that I only recently started to make the most out of is autorun. After moving in the same direction for a few seconds, an autorun button will appear on the screen. After pressing it, what a surprise, the character will run without having to hold on to the button. All you need to do is control the direction with the right side of the screen and watch out for nasty wolves, boars or goblins along the roads. 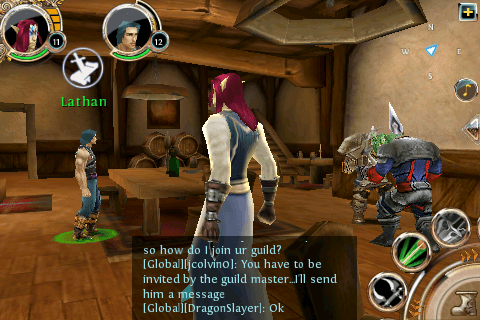 It’s slightly annoying that the game only works while connected to wi-fi. While I am sympathetic to the burden a game like this would be on my mobile Internet, I can’t help but want a bit more mobility in my mobile games. However, there is a plus side to the game being online. After picking your region from Europe, Asia or America, you are connected to a huge network of players all taking part in the game simultaneously in real-time. I must admit that to have such a huge gaming network in the palm of your hands is fairly impressive. All you will need is a Gameloft Live account, and of course your own version of Order and Chaos Online. It should also be noted that the game requires a subscription in order to play. At first I was a little put off by this, but the initial download of the game comes with a free trial subscription, and any extra subscription fees are pretty reasonable: ranging from AU$1.99 a month to AU$3.99 for six months. 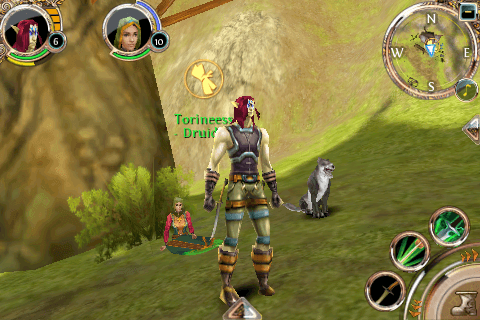 One feature that I particularly do enjoy is just how customisable your character can be. Firstly, there are the basic options such as character gender and race. You can choose from elf, human, orc or the undead. After the basics, you are given options of skin colour, hair colour, a name and other details that tend to be the norm in avatar design. I must admit that after this portion of the game, I was not particularly blown away with my creative masterpiece. It wasn’t until I began to wander around the land, completing quests and roaming around, that I realised just how customisable the characters are. After completing a few quests, you are often given the option of choosing an item as a reward. These items can also be purchased from shops, but I prefer to earn mine for the first part of games like this. After selecting some new leather pants, a silk shirt and a long cloak, my elf ranger is by far the coolest cat (or elf, rather) in all the land.

By making a three-dimensional MMORPG, it goes without saying that the graphics are bound to be impressive. Well, at least impressive by iOS standards. The attention to detail in creating the worlds is incredible, from swamp lands to forests to castles to old pubs, Gameloft have done a fantastic job creating such a massive world. It’s also interesting to note the types enemies who inhabit the different areas. While some of them might be completely fictitious, like goblin thieves, the characters and geographical design are married so well that it is perfectly reasonable to see a band of goblins on a roadside near mountains. This, coupled with the numerous amount of customisable features that make players avatars stand out, creates an amazing fantasy world. 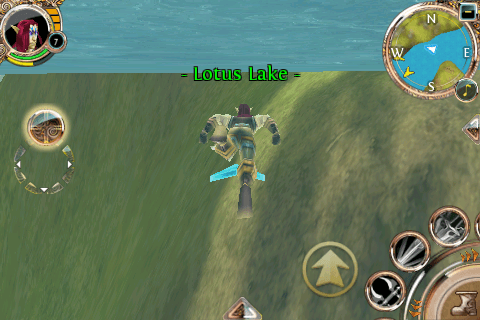 At first glance, or listening rather, of Order and Chaos Online, there isn’t anything really remarkable about the audio. All the sound effects sync with in-game actions and make for some pretty cool battling. However, there is a little more going on in the game than I originally noticed. Over by the map icon there is a little music note, which I admit I pressed by accident. Here you have the option of playing your own music while roaming through different worlds. I thought this was a really cool feature and have since started to battle bears and wolves listening to whatever obscure soundtrack that inhabits my iPhone. When playing your own music the sound effects are not drowned out, which I must say is a plus.

With a game as ambitious as Order and Chaos Online it is a little hard to not be impressed. There is such a large number of things to do within the game it’s somewhat hard to get bored, unless you are being tediously relentless in your quest to complete certain missions that always end in you dying, something I’ll openly admit to. But once you get sick of coming back to life in a cemetery, something I’ll openly admit to, it’s easy to move on and enjoy the rest of the game. There are a few flaws in the game, which relate mostly to the size of the game. This is just minor glitches of character animation, slight lagging at times and the fact that as a mobile game it can’t be played absolutely anywhere. This is a game obviously made for fans of MMORPG’s such as World of Warcraft, which I am not really a fan of. None the less, I have had a lot of fun playing Order and Chaos Online so I can only assume you can too.

Check out our video gameplay for Order and Chaos below :