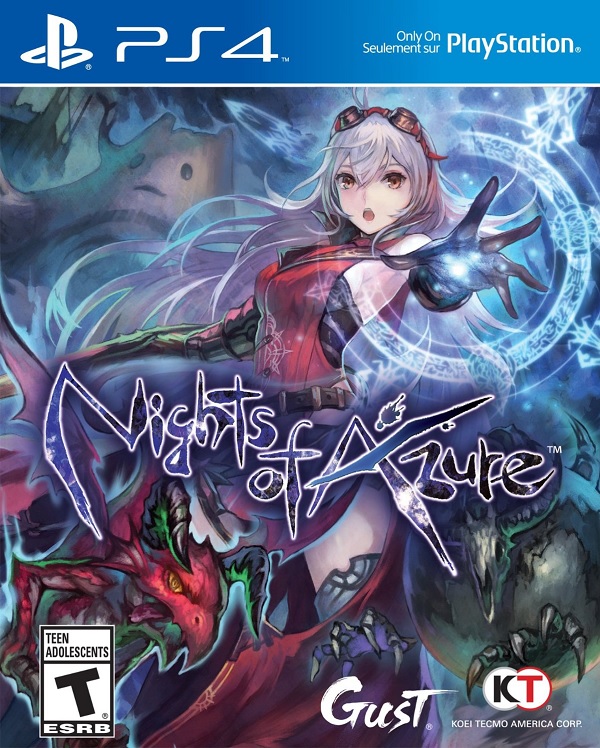 Overview
For many years now Gust has been known as the company that produces the numerous light-hearted RPGs that make up the Atelier series with a few breaks here and there for Ar Tonelico and Ar Nosurge. This time however they are tackling something a bit darker in the form of Nights of Azure, a story described as being quite different from the cute style that the company is known for. So now that Nights of Azure has been released in the West, how does this title fare?

Story
Many years before the start of the game’s storyline a dangerous being known as the Nightlord warred against humanity and threatened to send the world into Eternal Night. After a dangerous battle humanity managed to survive but the slaying of the Nightlord brought about dangerous unforeseen consequences. When killed by The First Saint, the blue blood of the creature rained down on the world and anything that it touched became a creature of darkness. 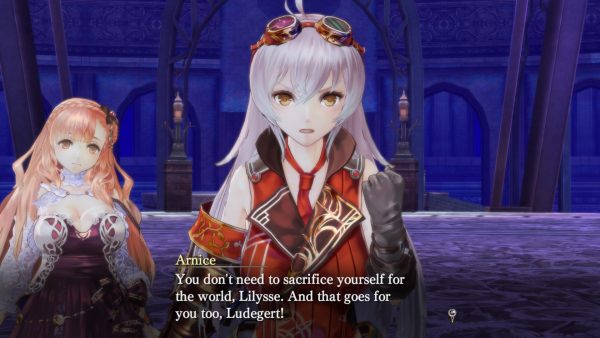 The story begins with Arnice, our main heroine, arriving on the shores of Rusawal, an island kingdom heavily affected by the Nightlord’s cursed blood. Arnice has been sent to the island by the mysterious Curia as her status of being partially afflicted with the demonic blue blood gives her the abilities to stand up to even the strongest of foes and this means she is at her best when either fighting to destroy demons or protecting someone.

Arnice quickly meets up with the person she is charged with protecting, her beloved childhood friend Lilysse who in the time since they’ve been separated has been named as the next Saint. Despite having a temporarily happy reunion, now that these two have met once more their fates have been forever changed. For while the Nightlord may have been defeated, it will rise once more unless a new Saint is sacrificed and with Lilysse being the next in line, it is up to Arnice to figure out where a sacrifice must take place and if she is even capable of sacrificing the life of someone she holds dear. 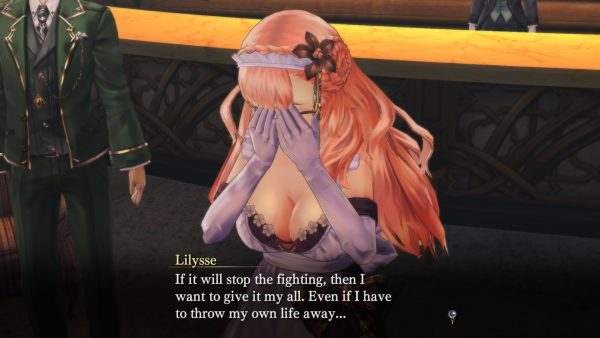 Nights of Azure is at its best when it focuses on developing the relationship between Arnice and Lilysse. As players progress throughout the game they will see how  close these two become and how Arnice acts when her feelings begin to cloud her duties despite the fact that Lilysse often seems ready to accept her fate. These moments mark the most interesting parts of Nights of Azure ’s storyline which is somewhat unfortunate because outside of this pairing the rest of the characters  that are eventually introduced only add a bit of extra flavor to a fairly inconsistently toned world.

You see, while Nights of Azure may initially be presented as a story with a dark premise and a world where inescapable emerge at night the writing rarely remains consistent. One moment players will be witnessing dark events unfold only to then witness Lilysse stumble around in a cute outfit back at the hotel. This means that even when various developments begin to unfold in the story they are often shrugged aside in order to provide some light-hearted comedy. 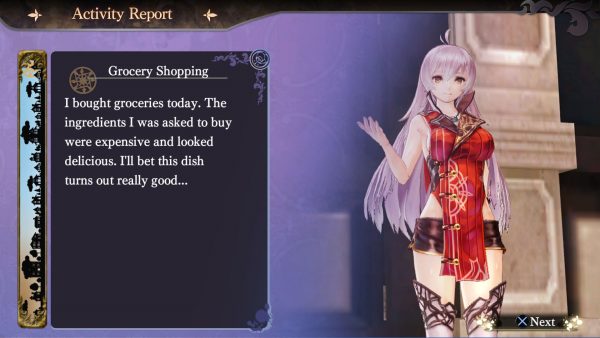 This isn’t necessarily a bad thing when it comes to Gust, but considering the tone and story that the company is trying to portray here it ends up becoming something of a mess, especially since numerous aspects of the game are rarely fully explored. Thanks to that it is highly likely that players will find the story rather unappealing as it rarely develops beyond the initial premise but thankfully  the relationship building moments between Arnice and Lilysse help save Nights of Azure ’s narrative.

Gameplay
In Nights of Azure players aren’t tasked with exploring an overworld or traveling between certain points in the city. Instead the majority of the activities that don’t relate to fighting enemies take place in the game hub, the Ende Hotel. Here players will be able to rest up and heal, save the game, take on various quests and advance the storyline of various side-quests as well as witness the many events that take place between the various characters in the game including the Servans that Arnice is capable of summoning. 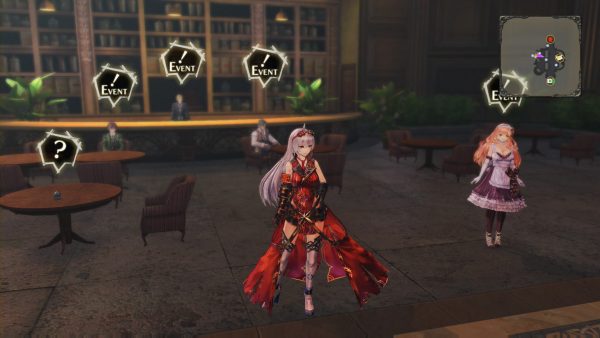 Players will then set foot outside the hotel taking on the various missions and traveling to points spread across Ruswal Island in order to vanquish demons as well as progress the storyline. Thanks to Arnice’s half-demon nature, she is capable of summoning creatures as familiars and as mentioned earlier they are called Servans. She can summon up to four of these Servans at a time and they each serve a different role in battle as they can help attack enemies, heal Arnice and her allies, or provide other forms of support.

Servans serve as the most interesting aspect of Nights of Azure’s combat system thanks to their customizable nature and the wide variety of creatures that can be summoned allowing players to create a unique party that fits their play style and given that the game is fairly easy most of the time and rarely throws a difficulty spike at players, though even then these spikes can be conquered with only a bit of extra effort, players will find a lot of flexibility when it comes to their party. The Servan AI works well enough as players can give the party simple orders with a tap of the D-Pad and trigger a Servan’s special skill with ease, though some of these skills are rather difficult to actually aim properly. 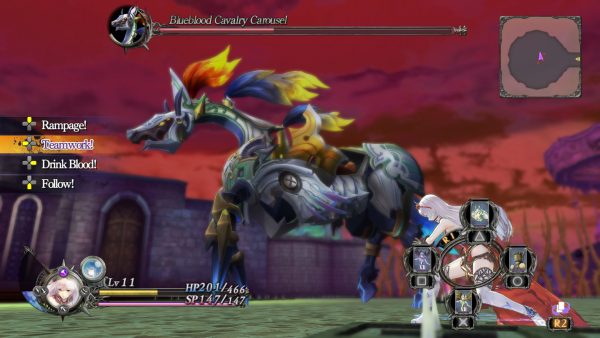 This is another plus since the types of Servans that Arnice brings with her at any given time determines the form she will transform into once players have access to that ability. Each transformation form offers a unique boost, with Rabbit Form increasing her movement and attack speed, Armor Form boosting her defense and attack at the cost of speed, and Demon Form to boost her attack and add additional affects.

These boosts to Arnice’s abilities and the fact that she will unlock new weaponry, all with their own combos and various advantages and disadvantages, as she gains levels, mean that players will find combat to be an extremely satisfying experience when taking on the numerous enemies that they will be encountering. Combine this with the decent variety of enemy types that players will take down with Arnice’s fast paced combat style that mixes together light and heavy attacks as well as a devastating special attack and you’ll have a battle system that keeps things fun despite the lack of difficulty. 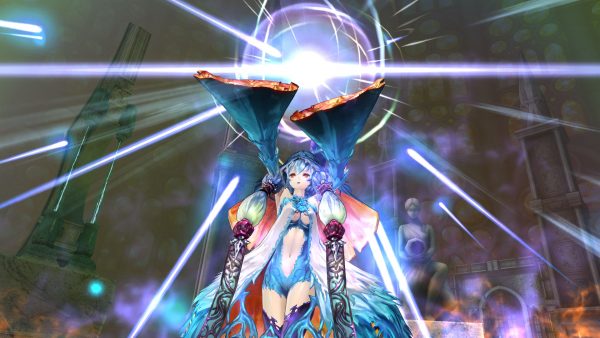 Once Arnice has fought her way through demons and returns back to Ende Hotel she will be able to level up her Servans as well as herself. While Servans gain levels simply from successfully surviving a stage, Arnice must take advantage of Blood that is gathered in combat and completing quests to level up at the Altar of Jorth. As mentioned earlier, many of Arnice’s abilities are initially locked away and by gaining levels certain game mechanics will open up.

While at the hotel Arnice will also be able to summon new Servans with “fetish” items that she has acquired in her battles and it is a nice touch that many of the Servans have their own little personalities that pop up from time to time. Finally there are some daytime activities as well, though these are incredibly uninspired. Arnice will take part in certain activities during the day on her own and will raise various abilities and the game will explain what she did off camera. This is a rather unfortunate way to handle a system that could have easily been expanded to allow players to see how Ruswal Island looks during the day when everyone isn’t hiding in fear.

Visuals & Audio
Nights of Azure marks the first game from Gust to actually be produced and released for the PlayStation 4, with another Atelier game following shortly after though that one hasn’t been released in the West yet. It is clear that the team was able to transition into the new console generation rather well as the character models in the game are absolutely gorgeous looking and have a nice level of detail to them. The environments help create a great atmosphere for battling and the various demon forms that Arnice can transform into are similarly well handled. It is worth noting that despite the game’s release on the PlayStation 4, there are still a few moments that the game will slow down a bit during intense action scenes. 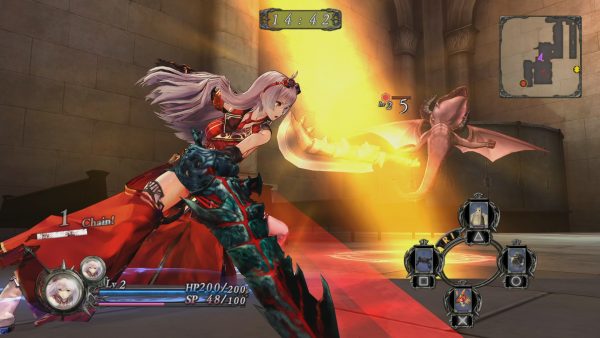 As for the soundtrack, Nights of Azure sports a very satisfying mix of themes that fit the atmosphere of the game well, with tunes ranging from guitar sets for combat and gentle tunes to fit the bonding moments between Lilysse and Arnice. It is worth noting that this release only features the original Japanese voice cast with English subtitles but thankfully the cast is presented well with voice work befitting their characters’ personalities.

Overall
Nights of Azure is a title that delivers in a number of places but falls short in its overall storyline. The combat system is incredibly enjoyable but lacks any real challenge unless you intentionally limit yourself and while the story may be unfortunately simplistic and certain moments go unexplored, the relationship that develops between Lilyse and Arnice over the course of the game helps hold things together.  With multiple endings to unlock and a fresh style unlike what fans of Gust are used to, Nights of Azure is an interesting but flawed title.
Capsule Computers review guidelines can be found here.