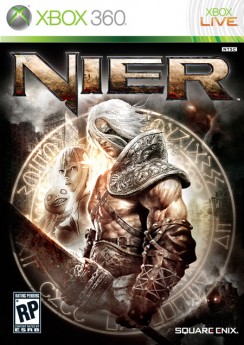 Overview:
Cavia who’s most recent game was a rail shooter called Resident Evil: The Darkside Chronicles and is also known for a medley of other games is back again with a stunningly touching RPG.  Just like their previous action game Drakengard which was released back in 2003, Nier is amazingly touching and has one of the best storylines in many years.

Story:
What would a man do to save his daughter from a debilitating and deadly illness?  You will find out.  Nier takes place a full 1,300 years after the fall of humanity. (As a small side note, there is a hint within the game that states the reason for the fall is one of the endings of Drakengard itself.) Human beings are a dyeing species and only live in the ruins of what once was modern day society.

However that is not all that plagues these poor survivors; deadly Shades with no mercy strike them down without any remorse.  Just like the same disease which ravishes the populace of the world known as the Black Scrawl.  A middle aged man, named by the character but known hereafter as Nier, must seek out the cure to this deadly affliction due to the fact that his own daughter is slowly slipping from his grasp due to the Scrawl. 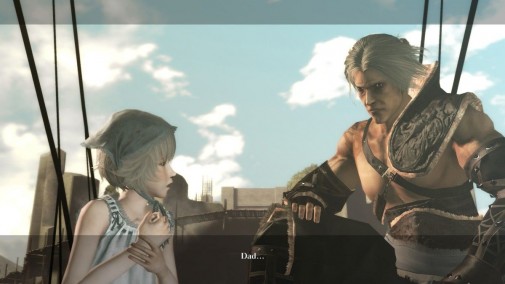 His journey is not a lone one however, as he is soon joined by one of the most colorful characters ever to be seen within an RPG.  There is Grimoire Weiss, a floating tome of knowledge who’s tongue is sharper than any sword. A young boy named Emil who would do Medusa proud with his ability to petrify anything he looks upon.  Finally though to round out this cast of characters is the cursed woman Kainé who strings together expletives and violent temper are anything but ladylike.  Kainé is the most unique for a reason, but that will be left for you to find out yourself.

Nier’s story and the delivery thereof is one of the best you will ever come to find.  Like Drakengard you will be constantly feeling the emotions that the characters themselves are feeling.  It is clearly shown throughout the story the deep fatherly love Nier has for his daughter Yonah and his willingness to rescue her no matter what, even if it means he must sacrifice his sanity to obtain his goal.  Kainé and Weiss constantly are at each other’s throats/pages and always make a high point in the game.  As for Emil…. poor Emil…..

There are four different endings to the game which leads to an extreme amount of replay ability as you attempt to receive all four endings. Each ending varies slightly and tears at the heartstrings of the player.

Graphics:
Unfortunately the graphics are one of the major failings to Nier.  But first the high point.  Each of the characters are very well designed, especially one character who undergoes a change part way through the game. Though their coloration makes some of the main characters seem nearly dead due to their pale complexion.

The environments are well detailed and good looking when you are near something at least. For everything else the world is quite bland and open.  This all changes though when you enter a dungeon.  Some may be a bit lacking in the design department but the uniqueness of each one is outstanding.  There is even a few hints towards other games which are not even from the same exact genre, but are extremely hard to miss. Even the set up and the design is the exact same of said game, see if you can discern what the level is mimicked after. 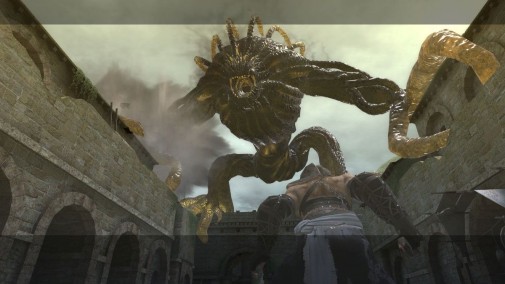 Boss enemies are amazing to look at, however normal enemies are all extremely standard.  There is a decent variety of enemies, but there is literally no graphical change between them.  The size may increase, or they may be wearing armor but overall every basic enemy has the same exact appearance of shimmering gold humanoid forms which spill literally gallons of blood everywhere.

If you dislike blood, I wouldn’t recommend playing this game.  Though there is no gore accompanying the violence blood falls upon the ground in liters.  Enemies will spray blood into the air as they are killed, splattering it along the ground and even on the wall.  Not only that but the characters themselves can be bathed in this blood in a realistic looking manner.

To put it simply the graphics are a bit out-dated.  When compared to any number of RPGs released this year, including a few Wii games at that, Nier suffers from lack luster graphics. There are multiple rough edges to the graphics as well as graphical errors which is hard to let by un-noticed. During battle there are times gameplay will come to a halt due to an overabundance of action happening on the screen only to resume a few seconds later.

Sound:
If you ever were to buy a soundtrack to a video game, Nier is the one to purchase it for. Nearly every single song is beautifully sung and paired with a stellar orchestra.  I don’t believe I have ever heard such amazing music to go along with a game.  There are even times when you will want to pause just to listen to the amazing orchestral score.  Not to say that there isn’t some repetition, but honestly with how the soundtrack for Nier is, it is hardly a bother.

The voice acting for each of the characters is spot on as well.  The emotion you will feel from each one of them mimics the deep storyline and the feelings portrayed by the characters themselves.  The bitter anger of Kainé, the wryness of Weiss, and even that you will have to discover yourself.  Not every single character and bit of dialogue has voice acting, but every major scene and dialogue does. 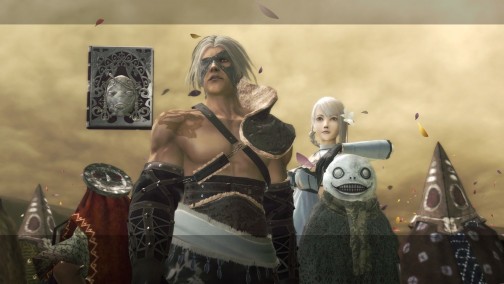 Gameplay:
Nier’s overall gameplay feels as if someone found a list of what everyone enjoyed about various RPG games, casual games, shooters and more.  And then they attempted to push everything down into one game.  During certain parts of the game the camera will switch, altering the gameplay.  At times you will be playing a platformer, a top down shooter, even a far away dungeon crawler.  You may even experience horror from the past as well.

At Nier’s core it is a standard hack and slash action game, with some small RPG elements thrown in together. You may level up, but there are no stats to modify or any actual character customization to be had. There are a total of two attack buttons, one involving normal melee attacks that can be charged, and a dashing attack for wider damage radius.  There is also the magic attacks which come in many different flavors and varieties, however their usefulness falls anywhere between very useful and useless without much gray area in-between.

On top of that there is the customization system which is handled through various prefixes and suffixes that are found throughout the game.  Each magic attack, skill, and weapon can have one of each added onto it providing a small upgrade of power towards the weapon.  There is also the ability to upgrade your weapons, however this is handled extremely poorly. 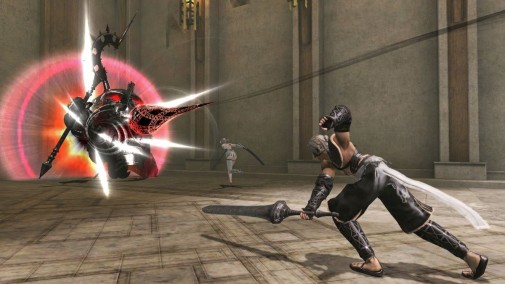 The area to upgrade your weapons is not near any town, instead it is a great distance away, involving a tedious walking distance coupled with even more tedious ladder climbing.  There is very little option with moving around the maps in Nier. Each map is extremely spacious as mentioned earlier, however without any proper way to navigate said maps they become extremely tiring.

Shortly after beginning the game you may obtain the ability to ride a Boar, however the boar itself is very unwieldy while turning and is extremely slow unless charging straight ahead in a nearly uncontrollable rush.  Even further down the line is the ability to take a boat between certain docking points of the game.  This however is completely pointless as only two docking points are anywhere near a useful area.  There are five docking points in the game, one of which is used for questing and two are useful.  The other three?  Not so much.

Not only is getting around tedious but you will be seeing many areas repeatedly.  On one such occasion you may be asked to retrieve a bit of scrap metal from within a Junk Heap.  Once this metal is obtained you will be then asked to go deeper into the mine to fulfill a request for the same people.  Only to later in the game come back to the exact same area again and walk through the same dungeon to defeat a boss.  Not to mention that this requires yet another fetch quest to advance the main storyline. 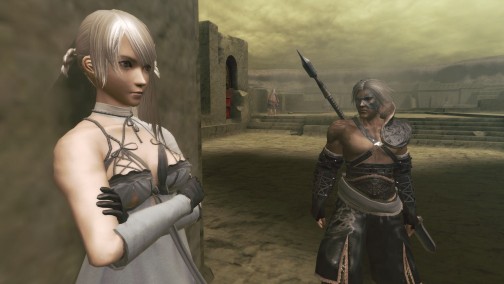 There are many side quests which are included into the game.  But to be quite honest there is very little variety in what you will be doing for them.  There are a few side quests involving monster slaying, a couple for delivering packages which can be extremely frustrating.  Though the most prominent quest that you will receive is a task to obtain a number of items that you may never have heard of, and you will be sent out without any hint as where to obtain them.  Be it either from harvesting certain areas, growing crops, or fishing.

This is another little part thrown into the game with little rhyme or reasoning.  Firstly the growing of crops.  There isn’t anything necessarily wrong with the small bit of Harvest Moon placed within the game, and it isn’t actually required at all.  If anything it is a small addition that is perfectly reasonable and is quite enjoyable.

The latter however involves enough anger and time wasting to force a controller through a wall.  The fishing mechanics in the game are completely broken, or otherwise intentionally made to infuriate the player.  Not only that, but there is a requirement to advance the main storyline which involves fishing itself.  There could have been many things done differently that could have made fishing enjoyable but instead Cavia turned it into a punishing task. 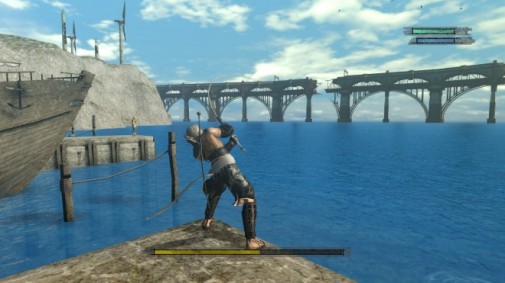 Overall:
Nier contains the makings of a great game.  If it wasn’t for lackluster gameplay with large time wasting trekking it would be perfect.  With the narrative story being astounding, the colorful cast of characters, the amount of dialogue and quirky comments among the characters, and the emotional draw of the game it could have been a top contender for game of the year.  If you can tolerate the long drawn out gameplay and the amount of frustration it brings you are in for a stellar story.