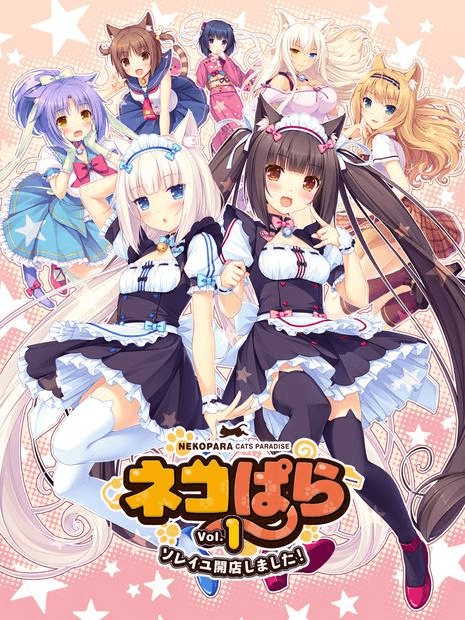 Overview
It is almost hard to believe the blooming popularity of PC visual novels in the West. There was a time that the closest fans would get would be an anime adaptation or a translation through unscrupulous means. Now not only is the effort to bring visual novels official English releases, but there are even a few that are being released in English right alongside their Japanese release.

Such is the case with NEKOWORKs and NEKOPARA Vol. 1 which was released in English the same day it was available for purchase in Japan, offering both an all-ages version as well as an 18+ version. That being said, this review will cover the all-ages Steam release but there will be mention of the other 18+ version here as that aspect is far from hidden.

Story
Kashou Minaduki is a man from a long line of Japanese confection makers but unlike the rest of his family, he wants to be a pâtissier that makes Western style deserts. As such he chooses to suddenly leave his family without saying a word to anyone in order to follow his dream. Once Kashou leaves and prepares to open his shop “La Soleil,” he finds that two large and heavy boxes have been left inside the shop and they happen to be making noise. 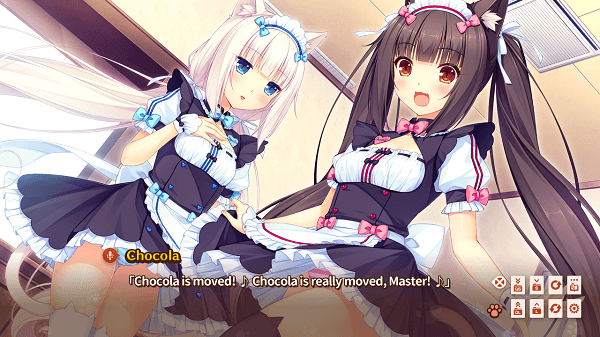 Despite moving without telling anyone, it seems that two catgirls, the youngest ones named Chocola and Vanilla, from home have chosen to follow him on his dream. You see, in the world of NEKOPARA catgirls exist and are usually taken care of by families as pets but occasionally are also taken in as workers or even lovers. Society has seen this as normal and no one bats an eyelash at the fact that a few catgirls may be running around, though there are specific restrictions in place as, despite possessing humanoid features and intelligence, their baser feline instincts still kick in.

Anyways, despite his best efforts to contact his little sister Shigure and send them home, Kashou eventually concedes that his initial choice to leave home and his dismissive attitude towards Chocola and Vanilla once they arrive is doing hurting these two catgirls. It may make some sense that he would initially reject the idea of living with the pair as he is trying to set out on his own, but the way he reacts towards Chocola and Vanilla is disheartening at the start thanks to the way that the pair immediately pulls on the reader’s heartstrings with how they react and their likable personalities. 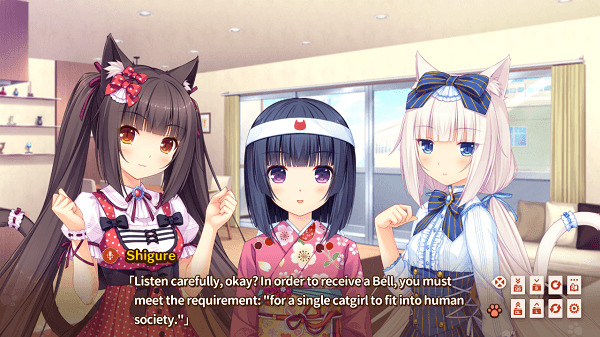 Thankfully once he accepts their entry into his new life and brings Chocola and Vanilla on as waitresses to help him out in his bakery, the story settles into a warm pace that may raise a few complications occasionally but tells a heartwarming tale that will leave readers laughing and smiling. In fact, the bakery setting is very fitting as the best way to describe NEKOPARA Vol. 1 is incredibly sweet since once the initial hurdle is cleared, we follow Kashou as he learns more about caring for Chocola and Vanilla as well as their growing bond.

Chocola and Vanilla make an extremely enjoyable pair as Chocola’s never ending energy balances Vanilla’s quiet personality accented with biting humor. Now Chocola and Vanilla aren’t the only catgirls in NEKOPARA as Kashou’s brocon sister Shigure has managed to raise four other skilled catgirls and she is more than willing to help her beloved older brother in learning how to properly care for his newfound “Catpanions”. While this means training them so that they can obtain “Bells” which provide some form of independence, which means helping them avoid playing with feather toys and various other catlike reactions, it also means taking care of their baser needs. 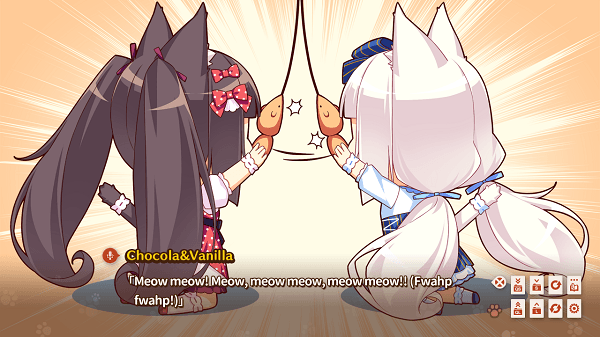 As mentioned earlier, the erotic origins of NEKOPARA Vol. 1 are still quite apparent in this release. The context of both Chocola and Vanilla going into heat as well as the scenes leading up to and following removed events make it very obvious to tell what is happening. It is worth noting that three total scenes have been removed from this all-ages release and a few CGs have been mildly altered but other than that the dialogue remains the same. This shouldn’t put off too many readers though and I find Sekai Project’s decision to simply snip the scenes without altering the story to be for the best, as it leaves the story intact and causes no disconnect between events as readers can easily infer what happens. 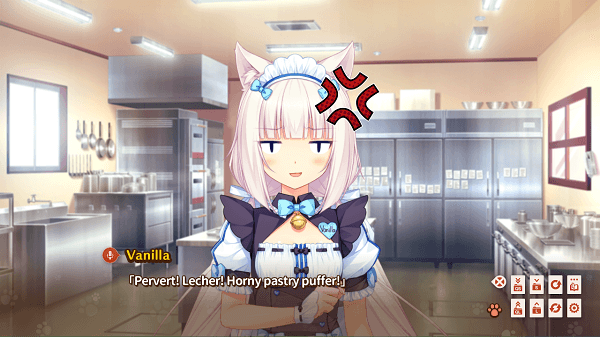 With NEKOPARA Vol. 1 leaving readers with a charming ending, it is clear that there is plenty here left to be told, partially thanks to the title’s relatively short length. While this first volume ends on a very pleasing note it also leaves NEKOWORKs with plenty of potential to build off of. Kashou’s family situation, which is hinted at being quite dire thanks to his decision, is barely touched upon. Plus outside of Shigure, the rest of the characters in the story receive very little development. The other catgirls; Coconut, Cinnamon, Maple, and Azuki, play small roles where readers will only get to know some of their personalities and it would be great to see them given more of a spotlight in future volumes.

Gameplay
Now NEKOPARA Vol. 1 is a true kinectic novel, which means that there are no decisions to be made by the player. Players will simply read along however they wish to, whether it be at their own pace or by setting the text to continue automatically. One thing that is interesting to note is that players also have the option to display more than one text language at a time, meaning that if you so wish, you can have the original Japanese writing above the English translations. 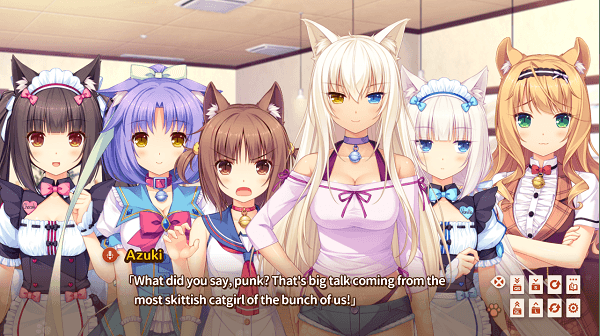 Other than that, there is very little else for players to concern themselves with other than accessing the “Extra” section where you can view previously seen CGs, movies, or listen to the music from the game. One more thing that may interest some, is an option that controls the “Chest Bounciness” of the characters which is not only rather hilarious to use but also a notable inclusion considering the effects the “E-Mote” system has on the game.

Visuals
Now this E-Mote system is something that is unlike anything else most visual novel fans have seen. The only artwork in NEKOPARA that is static are a few of the CGs and backgrounds. Everything else is animated in some form as every character that is portrayed is not only gorgeously drawn but completely animated to the point that characters will walk towards the screen as they interact with Kashou or lean in from the side as they listen in on conversations. 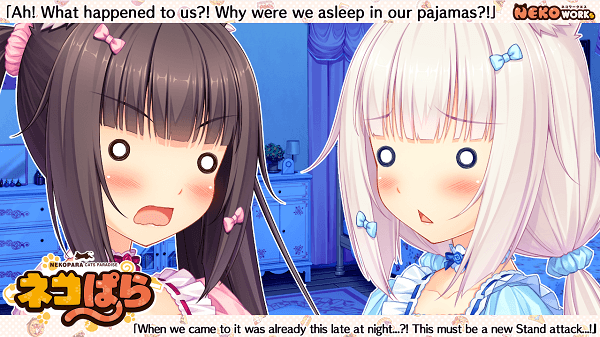 These animated character models really bring the game’s already impressively cute character design to another level. The characters will move their lips as they talk, move around a bit on the screen according to the context, and the catgirls’ ears will move depending on their moods and what they are saying. It really does bring out the best in the dialogue and the characters while giving NEKOPARA something special to call its own.

Audio
Another nice touch is that, outside of Kashou, all of the dialogue in the game is voiced. Chocola, Vanilla, Shigure, the rest of the catgirls, and even miscellaneous characters are voiced in some way. The voice actors for these characters do a great job with their roles and it helps that the game features an option to adjust the dialogue volume for specific characters as Vanilla’s softer tone of voice can occasionally be difficult to hear compared to Chocola’s louder enthusiastic one. 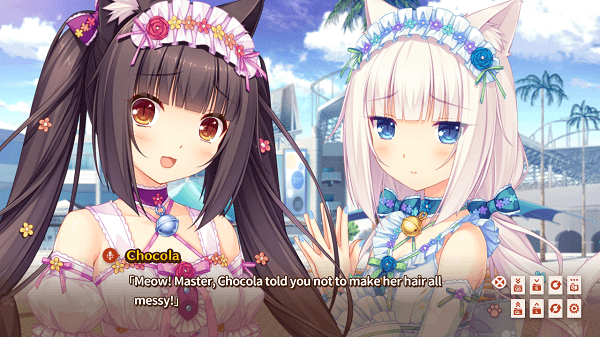 As for the background music, there are a number of nice sounding tracks spread throughout the visual novel, though most of these are standard fair considering the slice of life genre this title is aiming for. That being said, the opening theme song “Taiyou Paradise” is very enjoyable and will be hard to avoid listening to again.

Overall
NEKOPARA is off to a great start here in Vol. 1. Chocola’s and Vanilla’s personalities do make them the stars here, the lack of character development for the rest of the catgirls and the short length is disappointing. However this is the first in what will likely be a series with at least one more release and it is clear that there is potential to be tapped in the next volume. What is told here in this volume is a sweet charming story that follows Kashou as he builds a new life with the two catgirls that followed him from home as he set out on his own path in life told in a way that I can’t wait to see continue.