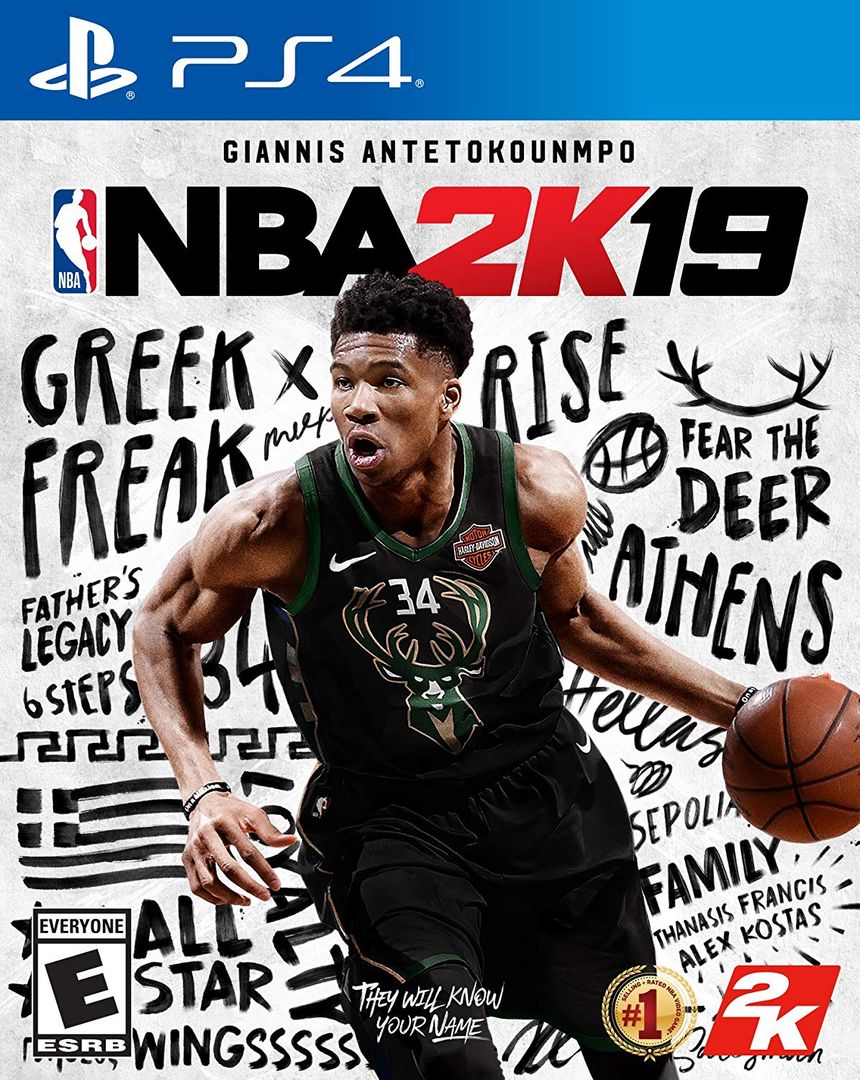 Like every good sports series, NBA 2K19 is out like clockwork. This year brings updates to fan favourite modes like MyCAREER and MyTEAM, the next chapter in the MyGM saga, and more.

NBA 2K19 offers a full-blown story in the MyCAREER mode. Players take on the role of A.I., an undrafted basketball player trying to work his way to the NBA through Chinese basketball teams and the NBA G League. The writers clearly have lofty goals with the story, embarking on a hero like adventure of self discovery. While the writers put up a serious attempt, NBA 2K19’s story falls short. A.I. is an obnoxious character, embodying the worst stereotype of the entitled millennial. A.I. does find his way, but the whole transition feels a little unnatural and rushed. While the caricature like supporting character seem to be attempts at comic relief, they generally are way too over the top. The lone bright spot is Coach Keller, who balances out his ridiculous outbursts with some genuine good leader moments.

MyGM mode continues the story from last year’s title. It’s obvious this mode plays second fiddle to MyCAREER as the writing tends to be pretty corny and dry. It is nice to see the game trying to bring in new players, offering them a chance to establish the events of NBA 2K18 before they swing into things. 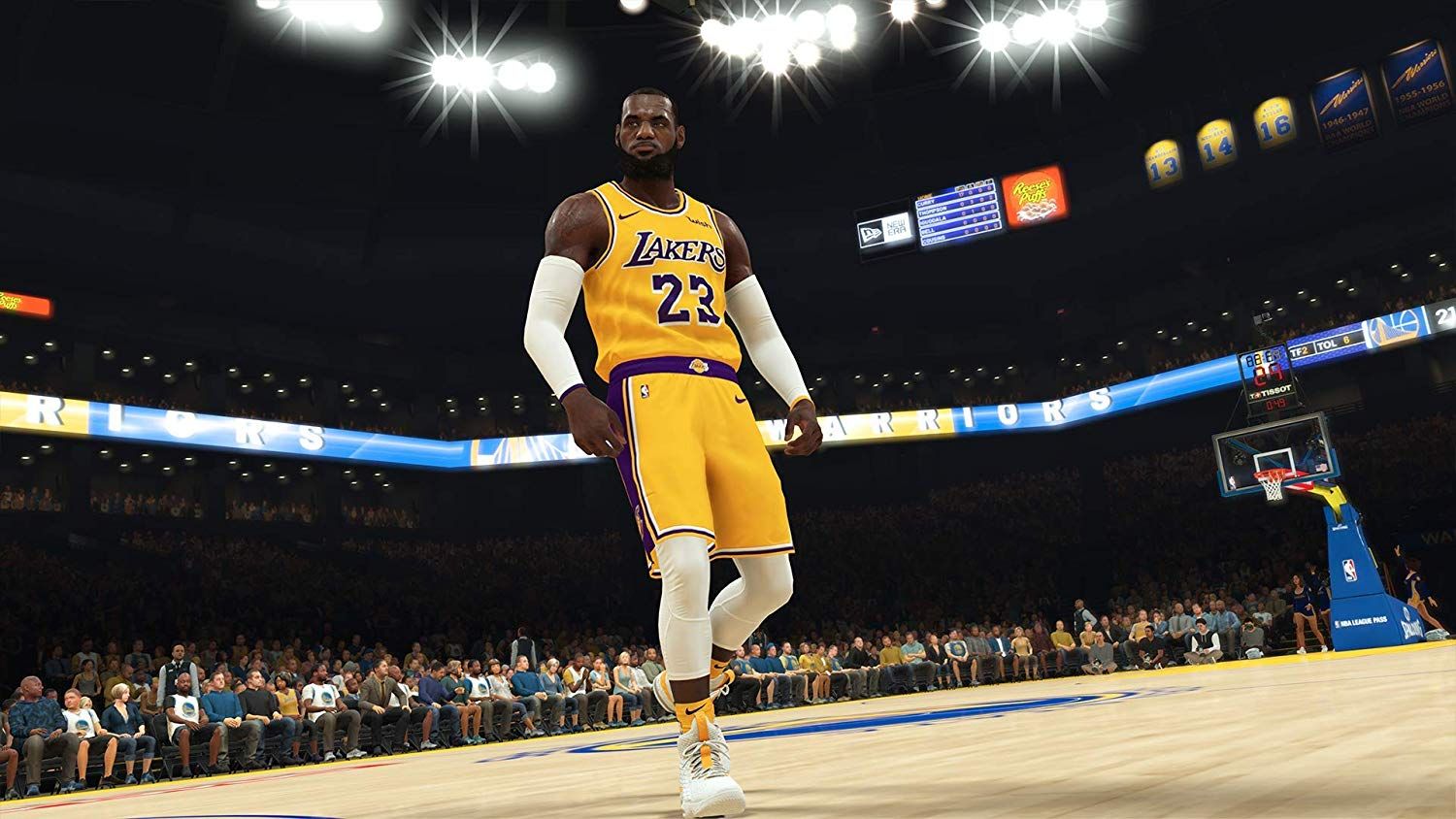 Most of the writing is taken up by play by play commentary. For the most part, there is a good variety of play by play banter that keeps things fresh. The commentary in MyCAREER’s story games are a bit on the limited side though as cutscenes get brought up repeatedly during the play by play. I would have preferred to hear more of the regular play by play make it into these MCAREER games.

NBA 2K19 is a thorough simulation of the full basketball experience. As a person who has only followed the NBA casually off and on over the years, I was pretty overwhelmed by the game. Besides the usual quick matches and league play, NBA 2K19 offers four My modes. MyCAREER and MyLEAGUE are probably the most accurate modes. MyCAREER offers players the chance to create their very own character and experience the game’s story mode. MyLEAGUE is a fancy name for the classic GM mode and is expanded further in MyGM. MyTEAM mixes collectible card game with basketball action.

As a newbie to the series, I found NBA 2K19 to be extremely daunting. The tutorials are terrible. 2KU is dedicated to learning the game. There are options for practice matches, scrimmages, shoot arounds, but no actual tutorial to teach players from scratch. The closest thing is the tutorial match that randomly reveals tooltips. In the end, learning how to play requires a mix of wading through the instruction manual and figuring things out on your own.

While the game’s tutorials are terrible, there are a lot of options in game to help lower the difficulty level a little, such as letting the AI handle play making and handy overlays that guides players to the correct position according to the playbook. While the game’s learning curve is still pretty high, not having to worry about calling or memorizing plays helps new players worry more about the fundamentals. Even with these handicaps, the game is still incredibly challenging. 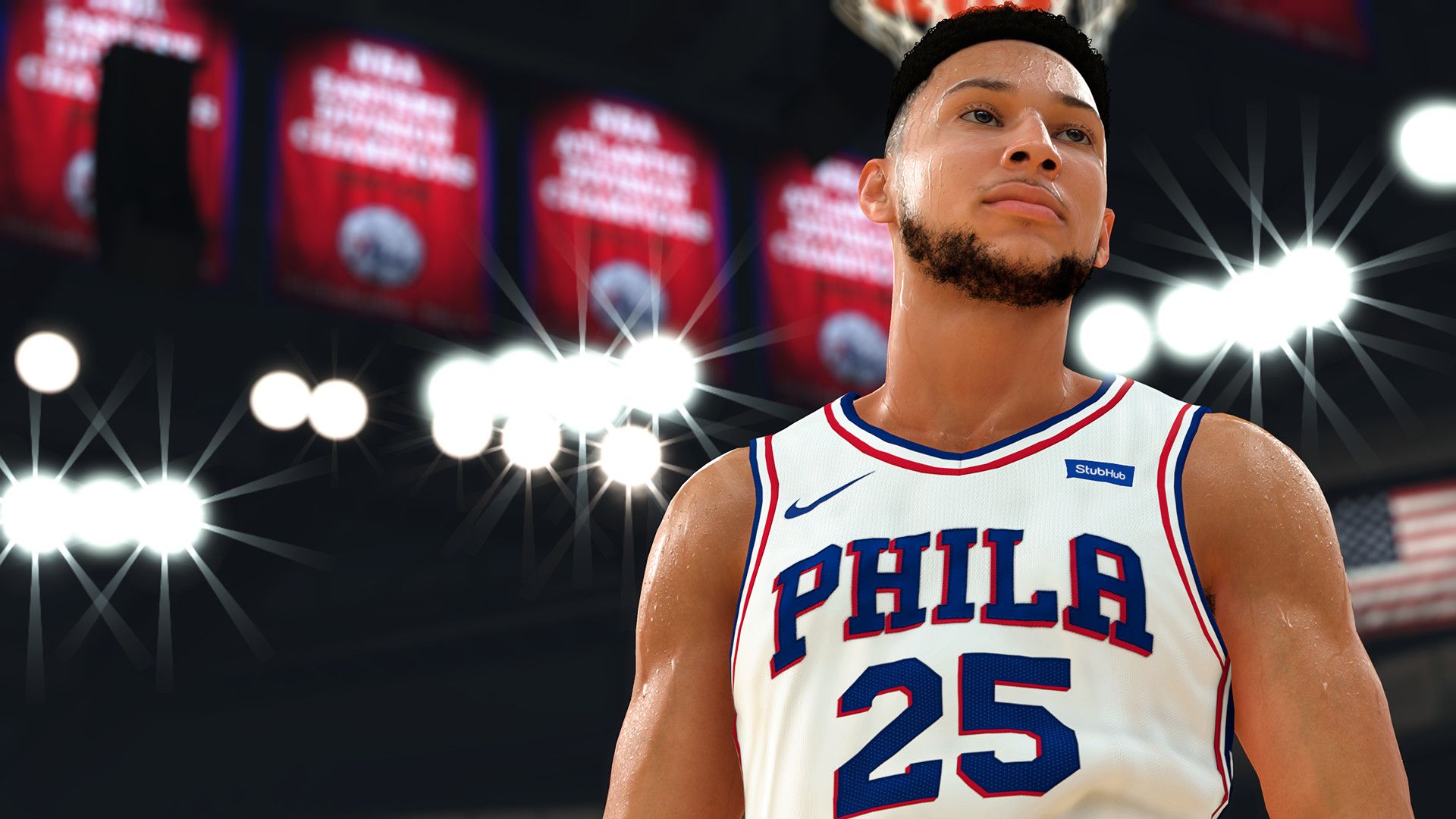 NBA 2K19 plays well. Shooting requires a decent amount of skill, and the game feels very responsive. Once I got over the initial learning curve, I did enjoy shooting the ball around, even though I am still downright awful at the game.

The controls feel natural and scale well for a variety of difficulty levels. The basic controls are simple enough, but serious players will have the opportunity to pull off advance maneuvers using the Pro Stick control system. On the flip side, this means PC gamers will really need to use a controller.

MyLEAGUE mode is the full GM experience. Gamers will get a chance to manage all the minutiae of running a team. This mode is probably the closest to a hard-core simulation of the complete NBA experience, from managing coaching staff, negotiating trades, scouting for prospects, and a little bit of actual basketball thrown in. The MyGM mode takes things a bit further by adding a story mode that brings the Seattle SuperSonics back with the player as the GM. It’s not the most newbie friendly of modes, but it’s a very thorough mode that will put basketball geeks to the test.

One of the two headline modes, MyCAREER lets gamers create and improve their own player that will work their way into the NBA. Once into the pros, players will be able to negotiate their own contracts, rake in that sweet endorsement money, join their team for the NBA season, and hop online to play against other gamers from around the world. It’s a whole lot of fun as it gives time for gamers to get really attached to their character and focus on a position or play style they really like. NBA 2K19’s push for in-game currency purchases really puts a damper on the fun. The game requires a lot of grinding to get stats up to a reasonable level as everything must be purchased with in game currency. 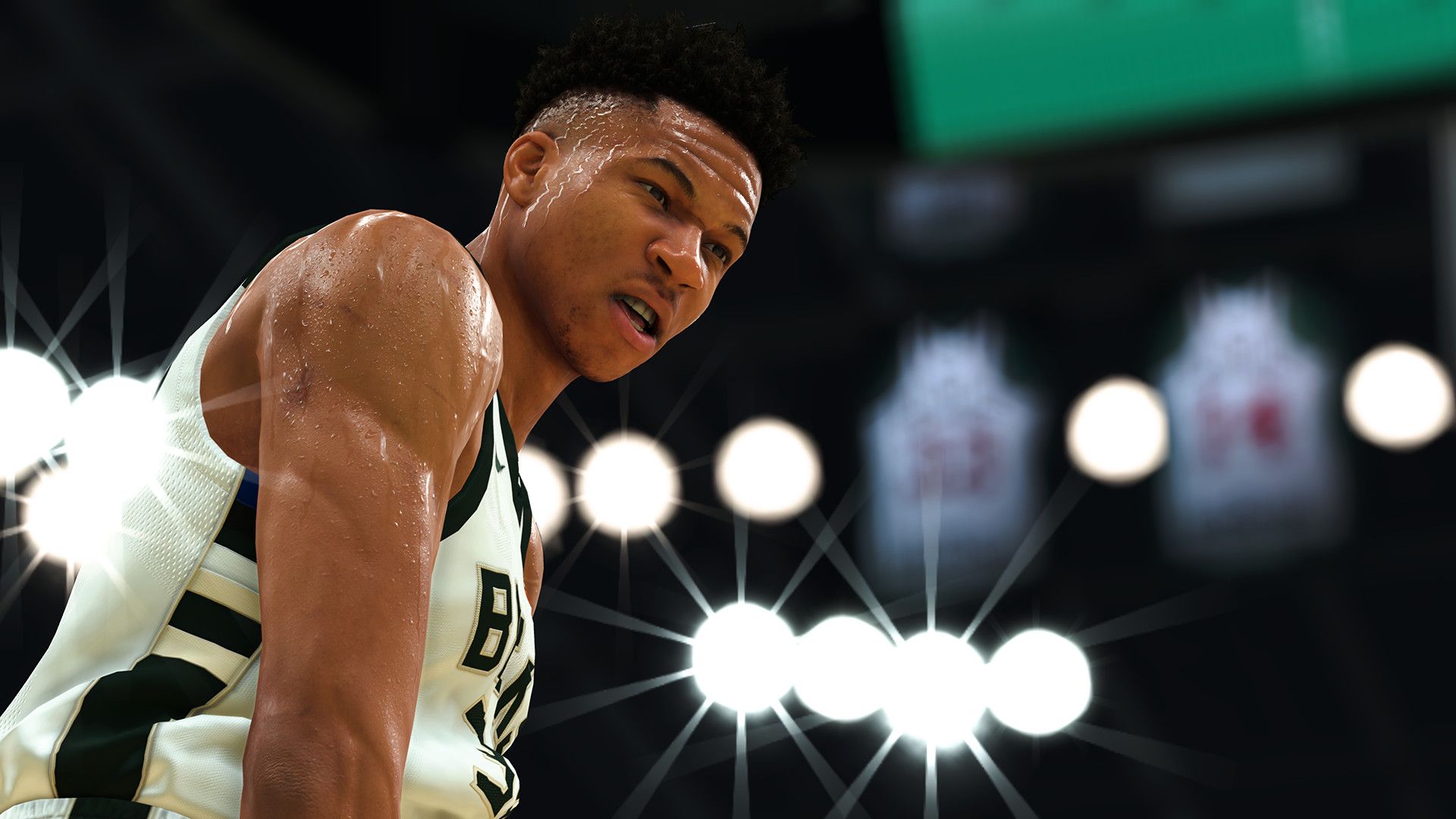 MyTEAM mode mixes trading card games with basketball. Players open packs of cards with either the same gold currency from MyCAREER or silver MyTEAM currency. Cards can vary from current and past players, cosmetic items, playbooks, and consumable buffs. The game modes offer a mix of single player and multiplayer content in classic 5v5 or street style 3v3 basketball. While the trade card game aspect and the flexibility are a neat twist to the classic basketball game, NBA 2K19 really pushes currency sales hard on this mode too. Every pack purchase defaults to purchasable currency, and it feels overly pushy. If gamers are desperate for a specific card and are sick of opening packs, there’s always the auction house, but of course that will cost you too.

NBA 2K19 is a gorgeous game that replicates the TV sports experience perfectly. The animations are smooth, with only the rare blocky transition when the camera zooms on players near the bench for commercial breaks and time outs. Players are looking closer and closer to photorealistic every year, and NBA 2K19 is no different.

NBA 2K19 nails the audio experience. The voice acting is excellent, and the play by plays are great. It’s a shame the MyGM mode seems to be an afterthought as there is no voice acting, just old school text boxes. The sound effects are spot on, and NBA 2K19 offers plenty of volume options to make the game sound like the gamer is watching TV or sitting court side. The game also has an excellent soundtrack with some big-name artists providing music. 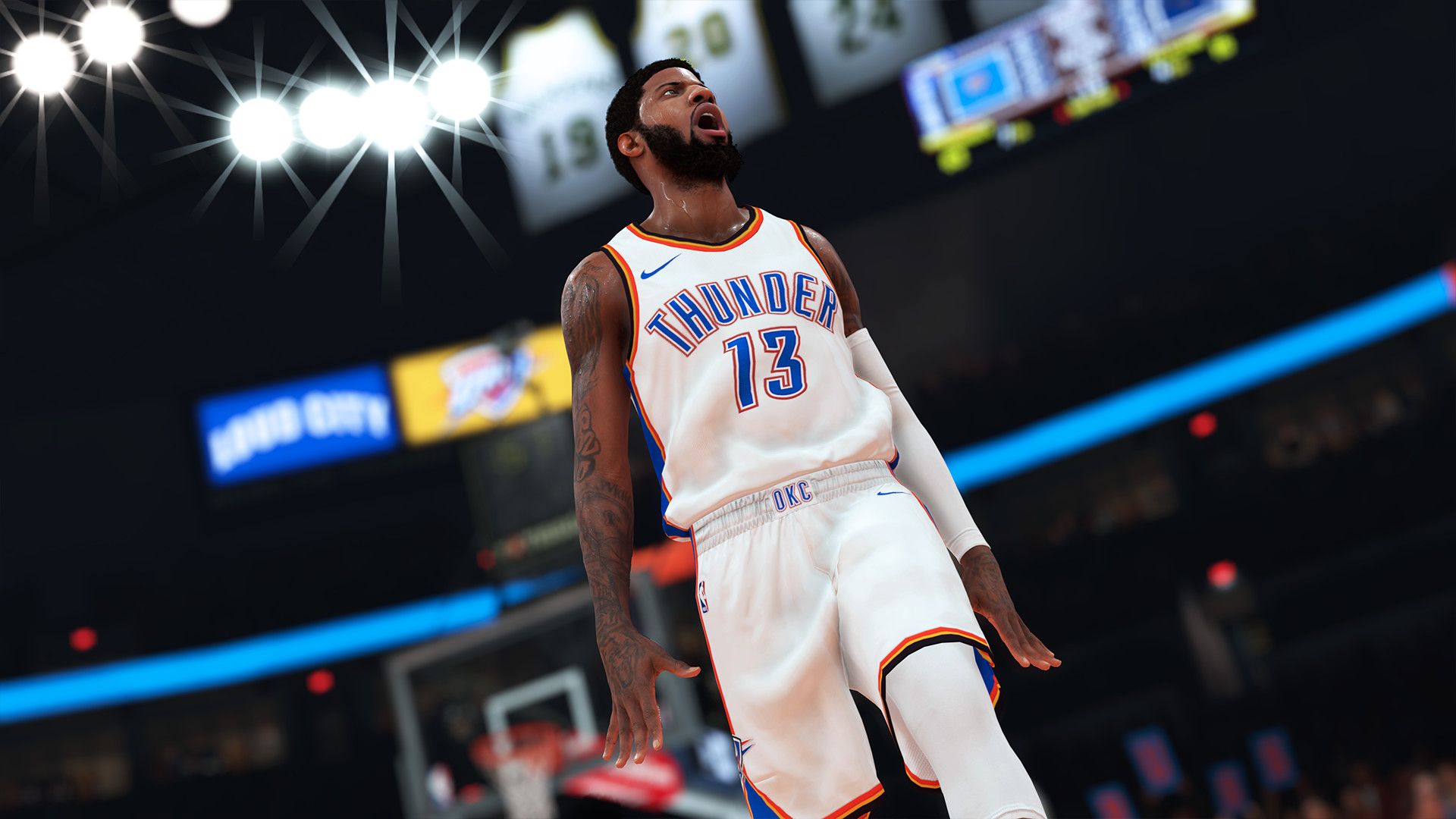 NBA 2K19 is a decent and challenging basketball game hidden behind a high learning curve and a terrible tutorial system. It seems like the developers aren’t really interested in converting gamers into basketball fans, and I’m not entirely sure the developers are interested in converting casual basketball fans into gamers either. While the game offers some excellent controls and challenging gameplay, the story feels rushed and the characters are annoying. For those already into the NBA 2K franchise, this year’s iteration offers lots of content, solid gameplay, and a ton of frustrating microtransaction strategies. The game is way too pushy, forcing players to grind a lot of games or pony up money to be competitive in marquee MyCAREER mode. Things aren’t much better in the MyTEAM mode either. Short of some serious post-launch balancing of microtransactions, NBA 2K19 is probably firmly in the court of existing NBA 2K fans.