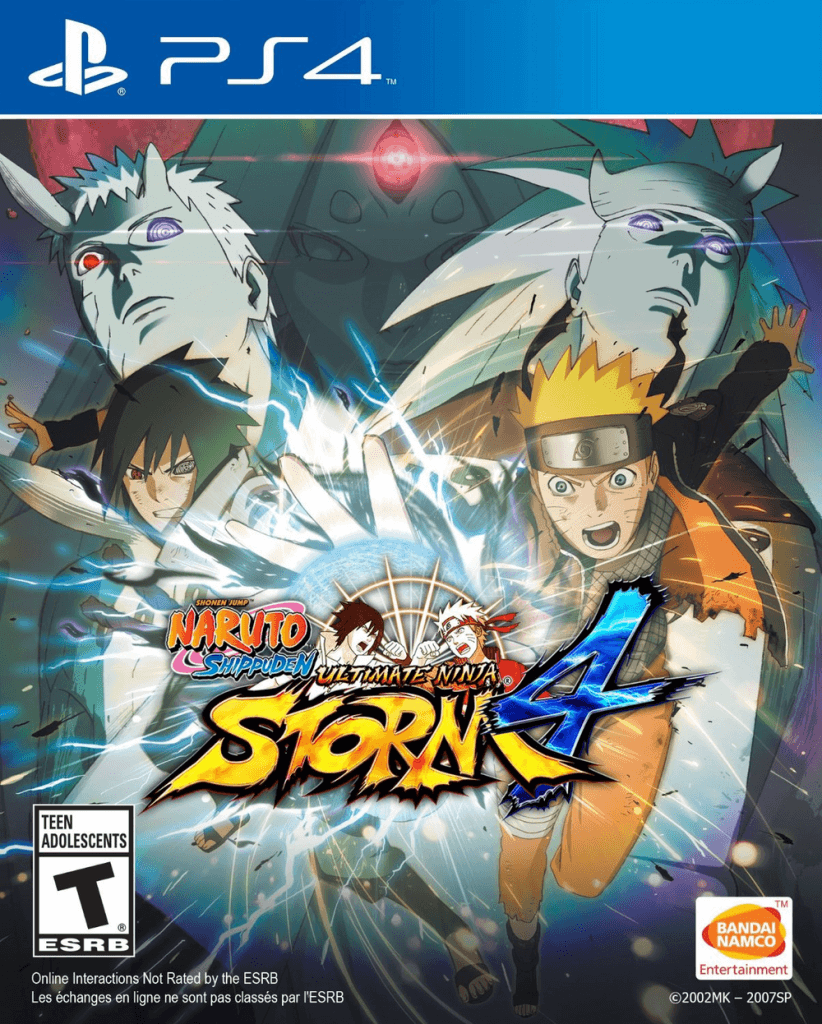 Naruto Shippuden: Ultimate Ninja Storm 4 (hereby referred to as Storm 4 for obvious reasons) is the 9th and seemingly final release in the core Ultimate Ninja series which began on the PlayStation 2 back in 2003. A lot has changed since then with the main difference being the shift to a 3D plane introduced in the first Storm game and an ever growing character roster, however the cinematic specials and simple combos have remained a staple of the series. Does Storm 4 end the long running series on a high note or fail to do justice to Ultimate Ninja’s multi-generation legacy? Our full review is below.

Storm 4 continues to tell the tale of Naruto, his comrades and his enemies in what is the final chapter of the Naruto Universe. As someone who relies on the games to get the main Naruto story (I haven’t read the manga or watched past the original series in the anime), I really felt like I was getting the full experience here with little being left out. The story is represented a little differently this time, with a chapter select menu as opposed to running around the Ninja world trying to trigger the next story moment, but I don’t feel that decision took away from the story at all and is probably a lot more appropriate as most of the story takes place on the one battlefield. It also allowed for some branching parallel paths that gives you a little freedom in how you want to progress through the story. 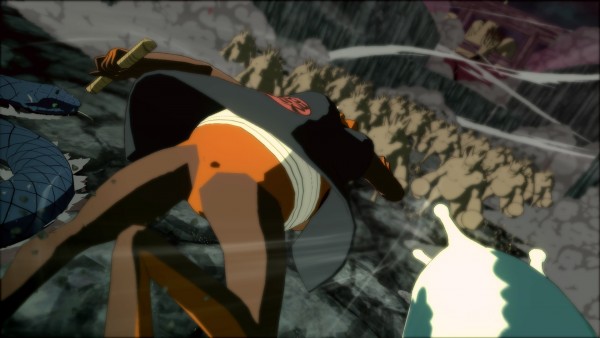 I won’t spoil anything for anyone who hasn’t experienced Naruto before or simply doesn’t want the games content ruined, but this last chapter takes place all within a small time frame around one main event (with a fair few chapters dedicated to all new back story for the games). The main Naruto manga reached it’s completion some time ago now, so the game basically covers from where the last one left off to the end of the manga, making Storm 4 the first rendition of the full story in animated form and in English.

This last chapter contains some great conclusions to long running plot points, new twists and some great backstory which really fills in the gaps and answer questions you might have about certain characters or motivations. It can get a little tiresome at times with some repetitive lines constantly being delivered (we get it Naruto bonds are important!) and the seemingly endless stream of power ups can get a bit much, but overall this is a well told tale with a satisfying conclusion and epic set pieces. Some of the takes on boss battles and horde battles are a little shallow and repetitive in terms of gameplay, but the integrated quick time events and story sequences help spur you on to reach the next chapter. 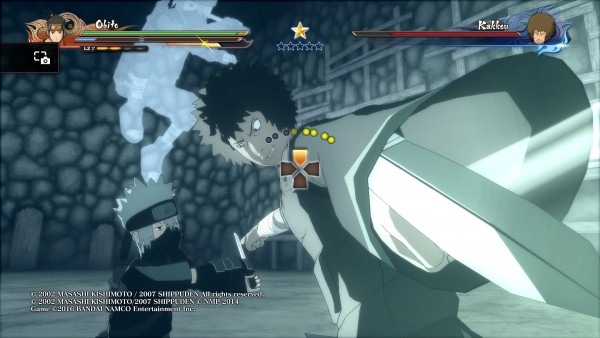 The 3D cutscenes CC2 creates for these games and the quick time events that go with them are a testament to how to handle an anime story mode. Unfortunately only about 70% of the story is told using cutscenes and for some reason CC2 has randomly chosen to use anime stills with slight visual effects over the top to convey some scenes. Perhaps there were budget or time constraints, but it does come off as a little lazy when this method has never been used in the past. Another complaint is the English dub lip syncing, which can be horribly off at times.

After the main story is done you can head to adventure mode. Think of this as filler material, it’s no where near as interesting as the main story, doesn’t really contain any voiced cutscenes and basically exists so that you can free roam around the linear paths and main villages of the Ninja World (which unfortunately is pretty mundane despite the interesting locations) and experience battles from the past which take the form of memory crystals. 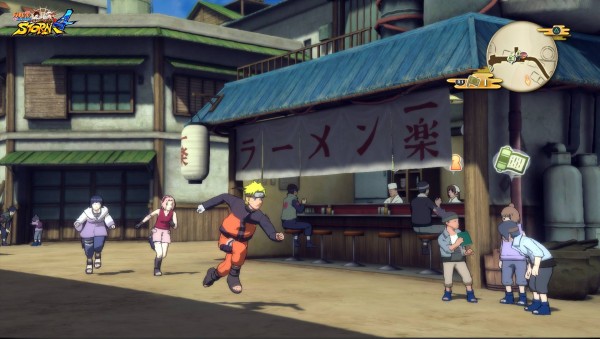 There are missions to complete from various people (mainly just talk to this person or fetch quest like missions) and a main story line centered around Naruto, Sakura and Hinata and the latters secret crush on Naruto. While there is some funny dialogue here this mode just feels really bland after playing the main story. It’s an OK extra if you want more single player content and don’t feel like playing the other game modes, but if you hated the free roam aspects in the past game you definitely won’t appreciate this effort.

The main fighting here is the ultimate amalgamation of all the Naruto Storm games from Storm 2 on wards (unfortunately jutsu clashes and wall running do not make their return here outside of story mode). Not only have a few new actions been added such as the instant Chakra dash and mid combo character switching (which is no big deal, the ability to swap between fighters on your team at nearly any given moment is a huge positive), but older actions such as the counter attack have been re-balanced also. CC2 have learned from the last five titles and put the ultimate combination of all those things into Storm 4. People will be glad to know the limiting ‘types’ that you had to choose from in Storm Revolution are gone and you can now awaken, use your secret technique and have supports help out all in the same battle. This leads to varied, fast paced, frantic battles that get more exciting as your health bars dwindle. Gauge management and timing is essential if you want to be any good at this game. 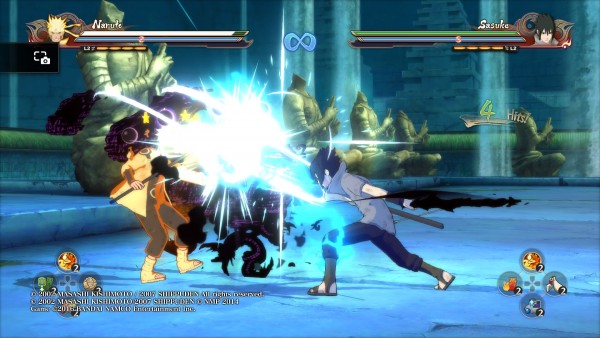 Storm 4 sports the largest playable roster in Naruto video game history and is chock full of variety. While we lost a few support only characters from past entries, Storm 4 introduces a few new fighters to bring the playable number of characters up past 100 (many with alternate outfits) with more to come through DLC. The team possibilities are near endless, especially if you factor in some characters having selectable specials/ultimates before a match, unique team secret combinations, awakenings that often change an entire move set and more. It’s going to take a long time before you experience everything each character in this game has to offer. While I some characters are obviously better then others, the roster is not only diverse but fairly balanced, with not one character seeming to have any overpowered jutsu.

Storm 4 also has a decent amount of game modes to keep you occupied. There are the previously mentioned Story and Adventure mode which will take about 12 hours to complete and a lot more if you are going for S ranks and aim to complete every side quest. Free battle allows you to play local matches with a friend or compete in a variety of different single player events such as survival, tournament and league where you will normally be put up against a themed team and challenge harder levels as you progress. You can also train in the practice mode here which gives some nice features such as unlimited Chakra, health etc. Outside of fighting is the collection menu where you can see everything you’ve collected throughout the game, with most of those things going to how you customise your online profile. 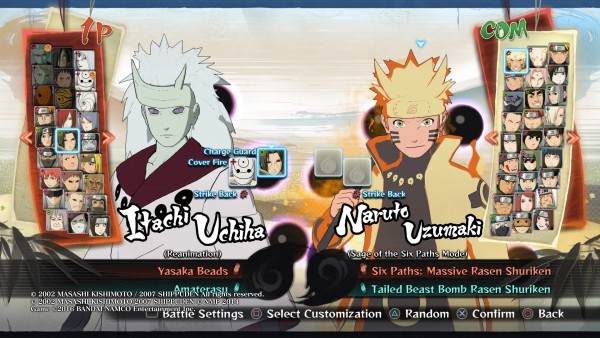 Now living in Australia we have a reputation for slow Internet connections, but I found online very difficult to play, experiencing trouble getting into a match and input lag even while playing someone in the same region. I had a much smoother online experience with Storm Revolution then I did here. Even finding an opponent has gotten much slower as if the game matches you up with a dud match it hangs on two similar messages saying an opponent could not be found and you will be returned to the online menu. There are also problems in ranked, where there is no punishment for the offender or reward for the winner if someone disconnects intentionally. There is an impressive amount of online game modes such as tournaments, endless and more, but the connection problems made the mode not worth the effort. Make sure you have a very strong connection if you want to play online. Why CC2 didn’t put all their past online optimizations into Storm 4 is beyond me.

The visuals here are only a slight step up from Naruto Storm 3 but that’s more a testament to how great the games looked in the past rather than a slant against Storm 4. The power of the PS4 was used here more to smooth the edges of the character models and have more effects going on at once. This a bright and colourful game and if you love energy attacks that could nuke a small town or cut a mountain range in half you will be happy to know that those attacks and their accompanying explosions all look incredibly devastating. In many ways Naruto Storm 4 looks better than it’s anime counterpart, especially during some moments of the story mode. 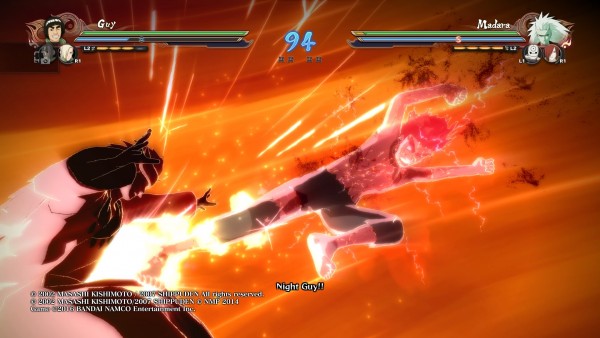 Where the visuals have been stepped up the most is in battle, with most characters clothing now being able to get destroyed in certain ways. Sometimes this just means having scuffs and bruises on the character but other times it can lead to what looks like an entirely different outfit which is a nice touch. Some stages also have destructible areas now although this is rather lackluster, not affecting the battle in any meaningful way and often goes unnoticed.

Like the visual the audio in the Storm games has always been well polished and that is no different here. Voice acting in the story mode is well delivered and emotional outside of a few awkward villainous laughs from Sasuke which just sound strange. Fans of the original Japanese work can switch over to that vocal track in the options menu. The music in the Storm series has always had a “mimicking the series” feel and that is no different here with plenty of emotional, action and epic feelings tracks for each respective situation. Sound effects are faithful to the show and add ‘oomph’ to the combat. Fantastic audio as always for the Storm series. 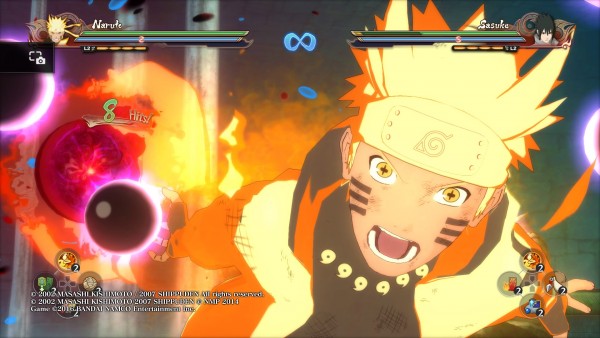 Storm 4 does little to bring anything new and substantial to the Storm formula that has remained largely the same for it’s duration however it at least equals and goes slightly better in the most important areas of the game to provide one of the most definitive Naruto experiences. Story, fighting and presentation are all top notch with the afterthought adventure mode and online being the main issues dragging the game down. Storm 4 doesn’t really raise the bar for the series but it is a worthy ending for the Storm chapter that began 8 years ago.