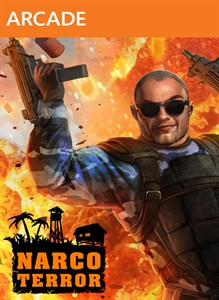 Get ready to blow stuff up over and over again with Narco Terror. Described as a “love letter to 80s action games”, this title packs a ton of bullets, enemies and explosions onto one screen with drop in, drop out co-op multiplayer. While there are plenty of modern updates to keep the retro feel alive, it’s not enough to save the game from painfully repetitive gameplay. For ten bucks though it’s not a terrible experience, as old school arcade fun never dies! 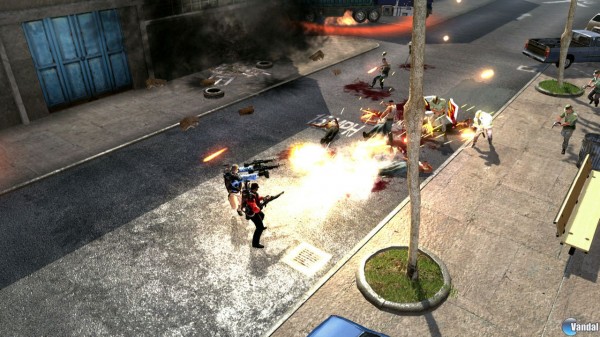 Narco Terror plays the exact same way you’d expect it to – if it moves, shoot it. If it doesn’t move, it’ll probably explode so you should shoot it too. For those unaware of how “twin stick shooters” like this work, you run around from a top view perspective, moving with the left analogue stick and shooting with the right. Personally I’ve found many titles of the genre often have general control issues, but Narco Terror’s controls are very responsive and maintain a good weight. As a result the player feels in control, making it a rather enjoyable experience. Enemies are generally weak and stupid, but make up for it with massive numbers. With bullets flying non-stop and countless opponents on screen, Narco Terror has a very old school arcade vibe. Sadly level design is basic and with the same opponents copy & pasted all over the place gameplay gets repetitive really fast. Deep Silver probably were aware of this during development and tried to keep gameplay fresh by throwing in a few mini games. Honestly, these are a hit and miss and don’t add much more to the experience. In fact, most are rather vanilla and will just have the player wanting to get it over and done with as quickly as possible. A basic upgrade system is also in place but again it adds little to the game. Power ups such as flamethrowers are fun, accomplishing what these mini games set out for but they are seldom seen. Furthermore aside from picking between four different unlockable weapons, players can also switch between four types of ammo which also slightly effect the gameplay. It’s an attempt to add depth to this very basic title which is a nice inclusion, even if it doesn’t do much for the game. 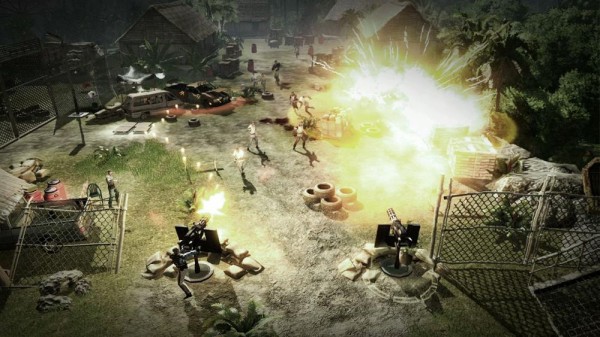 The big selling point of Narco Terror is it’s drop in, drop out co-op multiplayer. The game is truly designed to be played with a friend, with both local and online co-op available. Some slow down is to be expected which does take away from the experience slightly, but it’s not a deal breaker. However Narco Terror is a title that really drags on. The campaign goes for about four hours, but after the first you’ve seen pretty much everything, making it a really repetitive and boring experience. Sure the core gameplay is fun at first but it gets really stale really fast. In multiplayer, the cut scenes are also done in a rather lazy fashion, as they only show player one as opposed to both players. However during the entire game, including when you’re playing solo, the opponents will refer to the protagonist as “them” implying that there are two players playing. It’s a small thing that doesn’t ruin the game, but it seems pretty sloppy. Some glitches and bugs were also present, but again it’s no deal breaker. 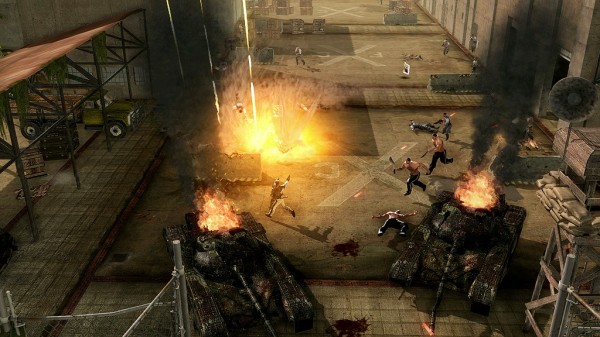 The worst terror of Narco Terror is it’s camera. For the most part it’s pushed really far back, distancing it from the player. Sure this could be to provide that retro feel, but most of the time it feels like you’re controlling an insignificant ant. Sometimes the camera gets in a little closer but generally it’s far off. Perhaps if it was closer more often things could turn out a bit more interesting. Furthermore the camera is always set in fixed positions, (you know, like old school Resident Evil) which can be occasionally awkward. Aside from that graphics are generally a mixed bag. While textures for the backgrounds can be detailed, character models are not and are usually a rough around the edges. The protagonist is also rather unlikeable in appearance, and the second player is just the same with a lazy pallet swap. Sound effects are also a mixed bag, with explosions sounding like explosions and guns sounding like bubble wrap paper being popped. Voice acting is painfully average with even worse dialogue. The soundtrack on the other hand is rather decent with plenty of variety. Influences range from dubstep, rock, drum & bass and even reggae. At least that’s one thing that’s consistent. 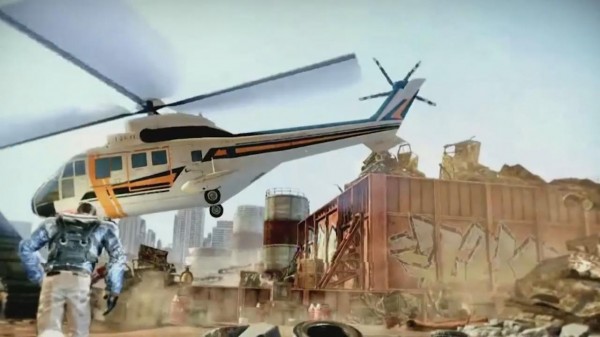 Narco Terror is a hit-and-miss title that gets as much wrong as it does right. Drop in, drop out multiplayer is done well but at the cost of some occasional frame rate issues. It masters that retro arcade vibe and has a decent soundtrack but repetitive gameplay and awkward camera holds it back from reaching it’s full potential. There are some nice bells and whistles thrown in such as ammo selection and power ups but ultimately it all boils down to a very repetitive experience that will eventually bore the player. However the foundations of a really fun title are present, with it’s heart in the right place. A recommend for hardcore retro fans only.