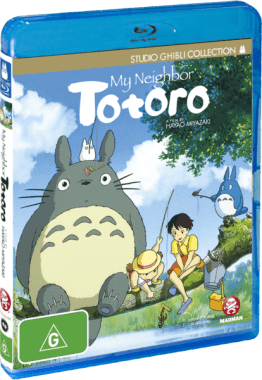 My Neigbour Totoro is one of the earlier films to come from Japanese animation house Studio Ghibli. Directed by Hayao Miyazaki, it was released in 1988 on the same bill as the heartbreaking Grave of the Fireflies, which was directed by fellow animation legend Isao Takahata. Totoro is far lighter fare than the World War II set picture, and follows the adventure of two young girls who move into a new home in rural Japan.

Upon it’s cinematic release the film didn’t set the box office alight, but after an airing on television and the release of some Totoro plush toys, My Neighbour Totoro became one of the most famous of Ghibli’s works. It marked the beginning of a golden age for the animation studio, which is now world renowned for its films. 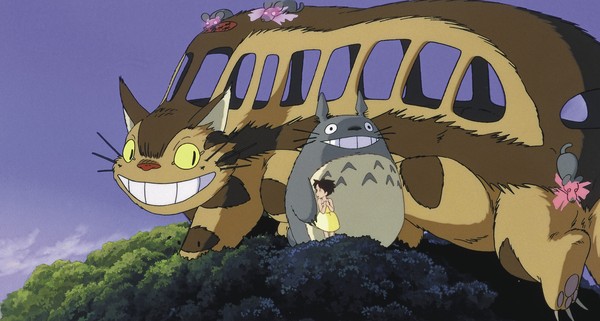 Satsuki and Mei are the two young sisters at the heart of My Neighbor Totoro, who along with their father have moved to the country to be closer to their mother who is recovering from a long term illness in a nearby hospital. They soon discover that they share their new neighbourhood with some fantastical creatures, including soot gremlins and a trio of creatures that Mei decides to name Totoro. There is a great emphasis on nature and magic throughout the movie, and it is something of a given fact that the creatures the girls discover not only exist, but couldn’t possibly be anything other than a force of good.

The plot is as light as a feather and for the most part simply follows the antics of the girls and their new friends. The film spends a good portion of its running time introducing the two girls, which given the strength of the characters is a charming experience. The girls are wonderfully written and performed, and the secondary human characters provide solid support. The magical Totoro only make an entrance after twenty minutes or so, but by that time the audience has no doubt fallen hook line and sinker for the two girls – never mind the fuzzy Totoro themselves.

It is also something of a love letter to the Japanese coutryside and what has now become an outdated way of life. The local village seen in the film is a simple place where rice paddies and forests dominate the landscape, and the Totoro are quickly cast as helpful forest spirits who protect the land and it’s people (indeed Totoro was the mascot for the Japanese “Totoro Hometown Fund Campaign”, which sought to preserve rural areas such as the one depicted in the film). 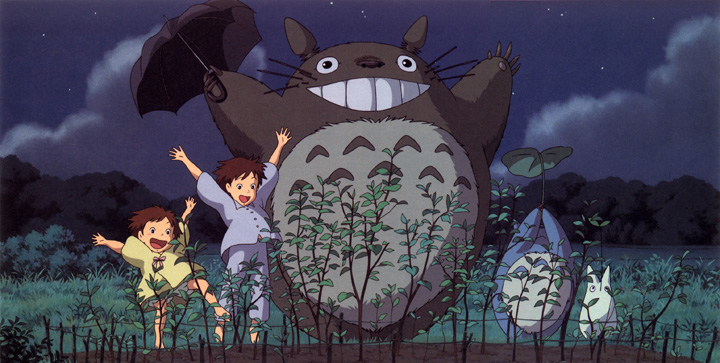 Despite the story containing little in the way of drama and peril, Totoro nonetheless boasts a world of innocent charm and fairy-tale magic that younger children will fall in love with.  There are several standout moments to capture the imagination of everyone who cares to watch, whether it is the cat bus (like something from Alice in Wonderland with even more hallucinogen at play) or the lovely scene of the girls and Totoro waiting at the bus stop. It’s a film that should be shown to young children without hesitation, and is a rare thing for being so peaceful and without violence or animosity.

That said it doesn’t have the same lasting appeal for first time adult viewers, and meatier Ghibli fair like Princess Mononoke will probably hold onto their places in people’s hearts. My Neighbour Totoro is heart-warming without a doubt, but it simply doesn’t hold the same power.

This release comes with both Japanese and English audio, with the latter being the more recent Disney dub rather than the 1988 Streamline Pictures version. It features the voices of Elle and Dakota Fanning as May and Satsuki respectively and their performances are what make the movie. The bond between both the fictional and real life sisters is obvious to hear, and having a real sibling dynamic at play pays off in spades. Both girls are incredibly lifelike, so well realised that you could pluck them off the screen.

The opening and closing theme songs channel the same spirit as the film, and if the closing theme doesn’t get stuck in your head there’s definitely something wrong with you. The music throughout is composed by long time Miyazaki collaborator Joe Hisaishi , who as ever provides a perfect accompaniment to the magical world on screen.

The animation is in classic Ghibli style, with simple but expressive character designs and beautifully painted watercolour like backgrounds. Totoro is an iconic character and the rural Japanese village setting is idyllic – the perfect setup for such a gentle fable. As far as the Blu-Ray transfer is concerned the film sadly shows it’s age. A flash of the newly released Ponyo during some of the extra features provides a stark contrast with the movie, and whilst the quality of the animation is not questionable it is not one of those movies that looks fresher for a transfer to high definition. 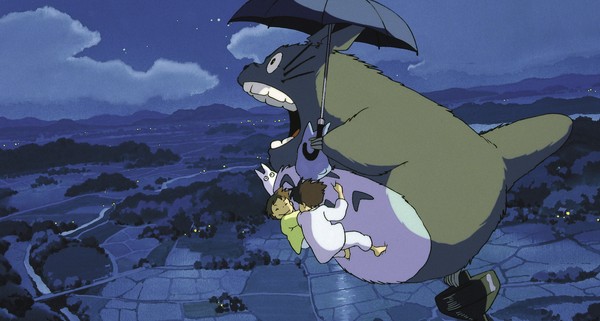 The extras include picture in picture storyboards and a handful of making of featurettes. The majority of these are only a few minutes long, apart from one location documentary which is actually a snippet of a full length Japanese documentary on Ghibli film locations. The drip feed of information includes some background on the film from the director himself, but the clips really only serve to whet the appetite rather than satisfy it. The textless opening and closing are included as expected, along with the original Japanese trailers.

My Neighbour Totoro is another classic animation from Studio Ghibli that should be as much a part of childhood as any Disney tale. The characters of Mai and Satsuki are wonderfully realised, and the world which they occupy is one of magic and innocence. Whilst the drama might not be there for older viewers, it is still an incredibly easy task to switch off that grown up brain and simply enjoy the fairy-tale being laid out before you.