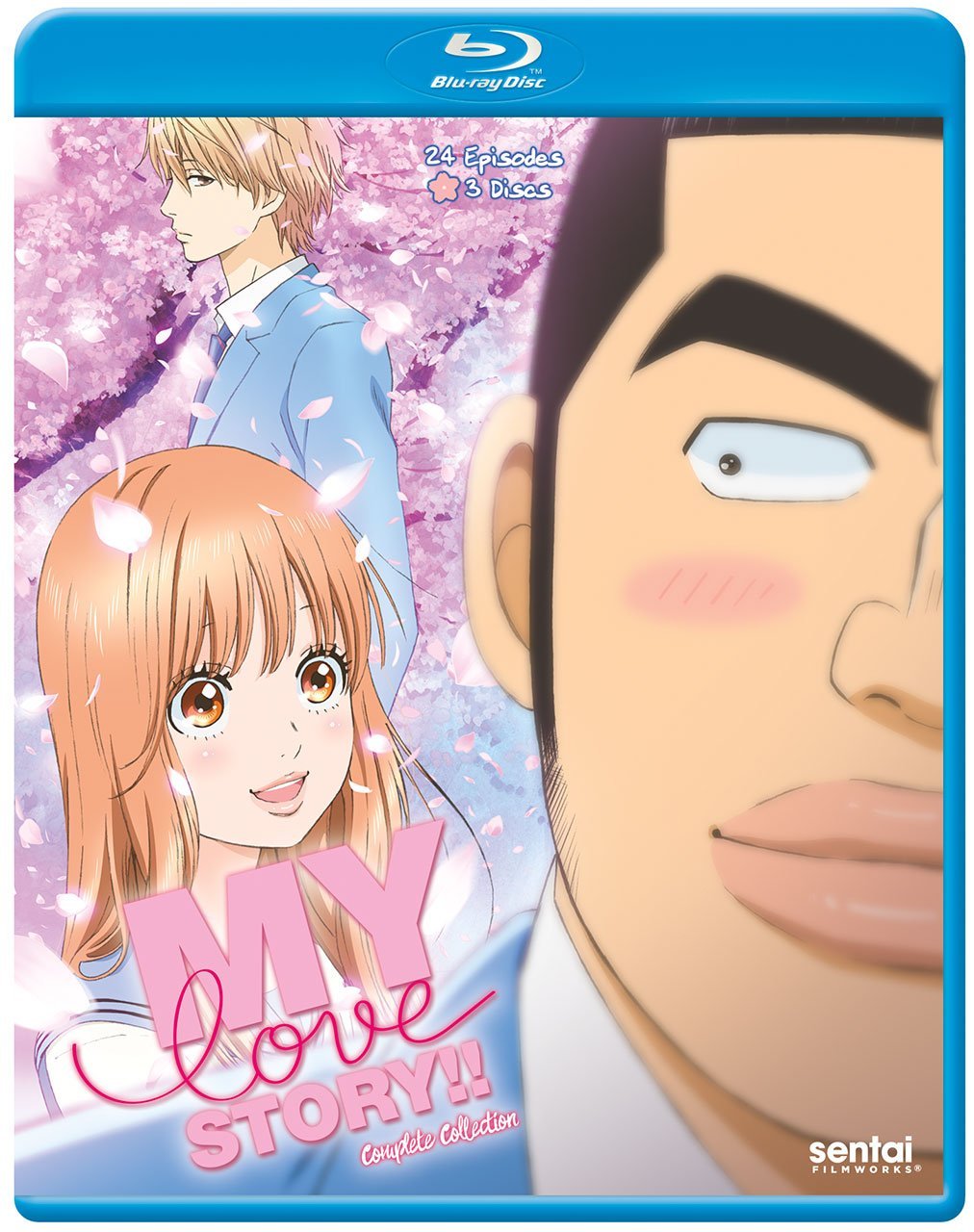 When it comes to shoujo based series, many viewers tend to write them off as being fairly predictable and while this is true in some cases, as we’ve seen in recent years the shoujo genre has come quite a long way. In fact, Sentai Filmworks’ release of My Love Story!! in North America is proof of that concept. With the company opting to release the entire twenty four episode series in one package, viewers are in for quite a lot of content here but does this unique love story play out in a satisfying manner?

Takeo Goda has always found himself to be incredibly popular with the boys in his class and even when he graduates middle school and advances to high school he leaves his classmates and younger friends behind in tears. That doesn’t stop him from taking part in a standard tradition in Japanese school graduations, attempting to confess your feelings to your crush. The only problem is, the girl he likes just so happens to be confessing her own feelings to his best friend, Makoto. 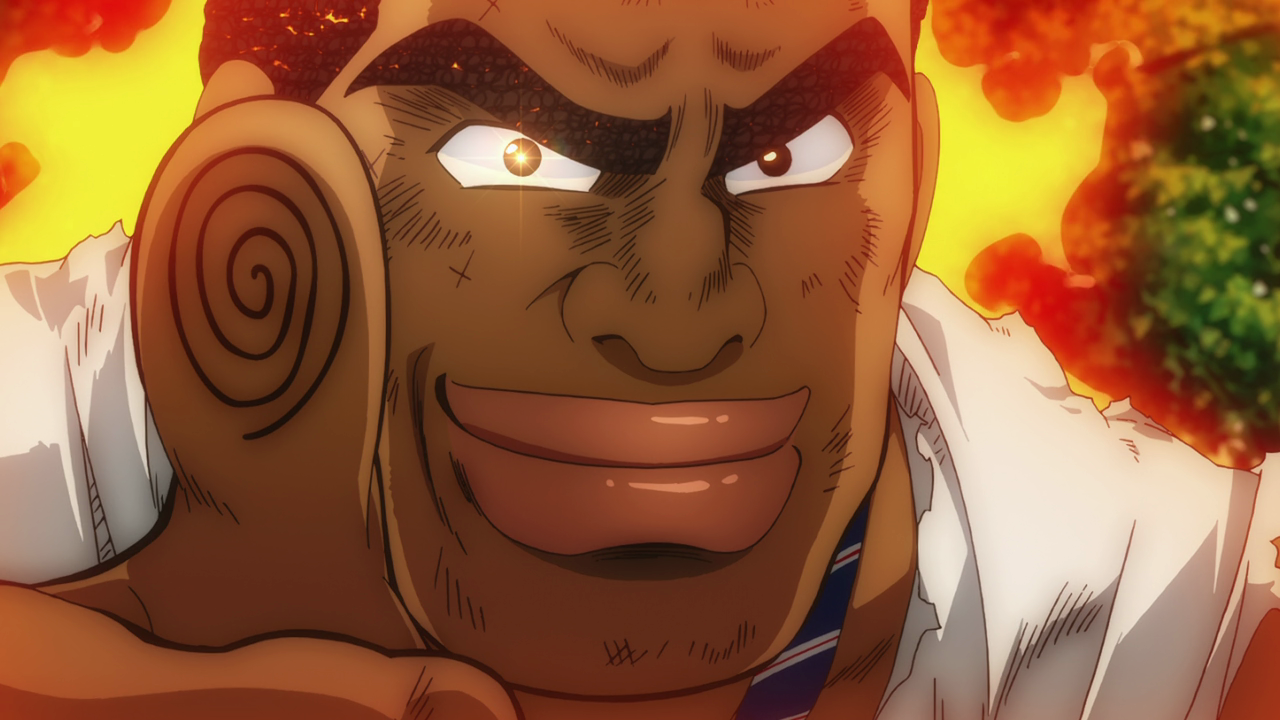 This is par for the course for Takeo as his friend since childhood, Makoto, has an aloof aura with pretty boy features that attracts almost every girl that lays eyes on him. On the complete other end of the spectrum Takeo strikes an imposing figure by standing nearly two heads taller than almost every other male student in his class and towering over any of his female classmates. With an exuberant personality that will literally have him in your face when he is excited and a kind heart, he wins over those who get to know him quite easily but comes off as a daunting and intimidating person to those who don’t.

Quick to act despite his dense nature and occasional lack of commonsense, Takeo never lets his failures at interacting with others or misses at love get him down. Even when those he saves from danger credit Makoto thanks to his approachable nature over Takeo he shrugs it off. As such the two form a tight nit pair who continue to travel to high school together. Only this time something is a bit different as Takeo witnesses a man harassing a girl on the same train as him. Using his strength he manages to subdue the molester before things go south and save the girl, who graciously thanks him with tears in her eyes. 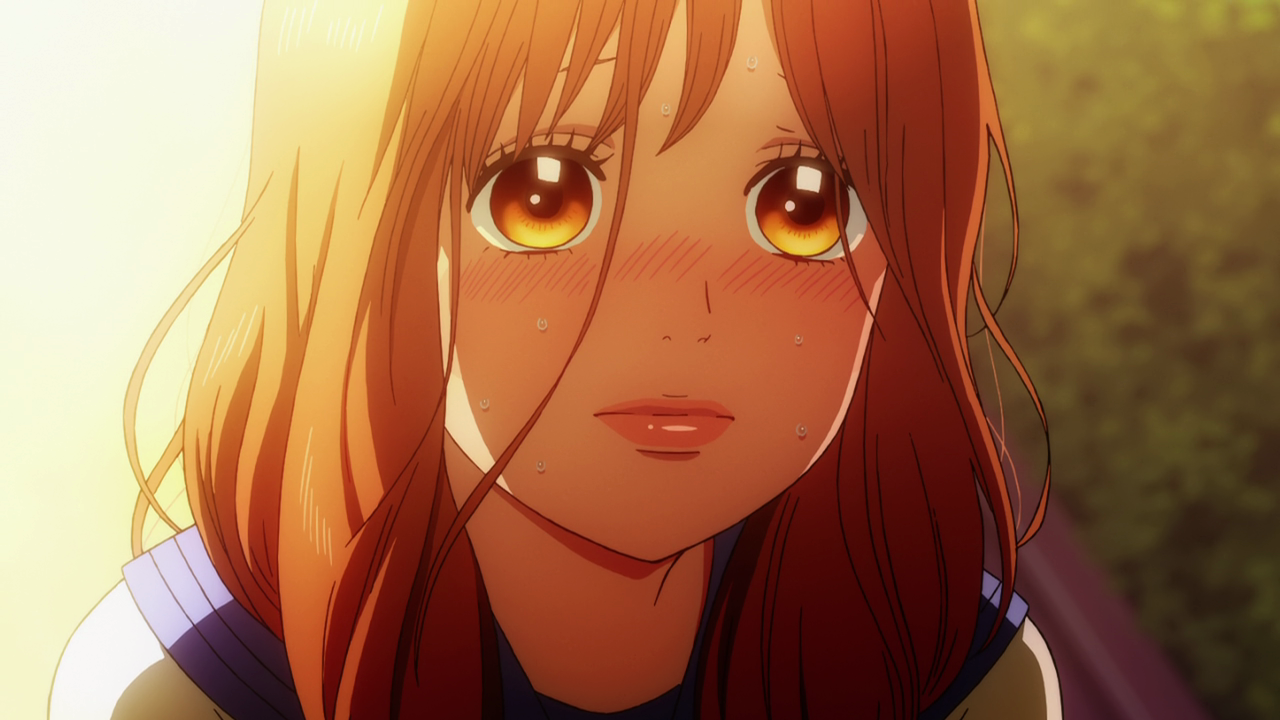 Takeo may have had feelings for others before but he falls in love with this girl at first sight as she gratefully looks up at him. After meeting with the petite girl, named Rinko Yamato, a few more times the pair learn that she is quite skilled at baking. Takeo’s dense nature may take some time to get through, but through some manipulation from Makoto he learns what viewers will easily pick up on, that Rinko had also fallen in love with Takeo when he saved her and that their feelings are in fact mutual.

One of the best aspects of My Love Story!! is the fact that viewers aren’t left with the whole “will they or won’t they” aspect for very long. While the initial few episodes may have Takeo believing that Rinko is looking elsewhere for love with his own actions only hurting her feelings, that problem is quickly resolved. Instead viewers can watch as the two clumsily maneuver their relationship together as both of them are completely inexperienced at being boyfriend and girlfriend. With Takeo’s huge presence but kind heart and Rinko’s shy nature but determined attitude this series quickly becomes an enjoyable treat that is as sweet as Rinko’s cooking turns out to be (what with how Takeo gobbles everything she makes down). 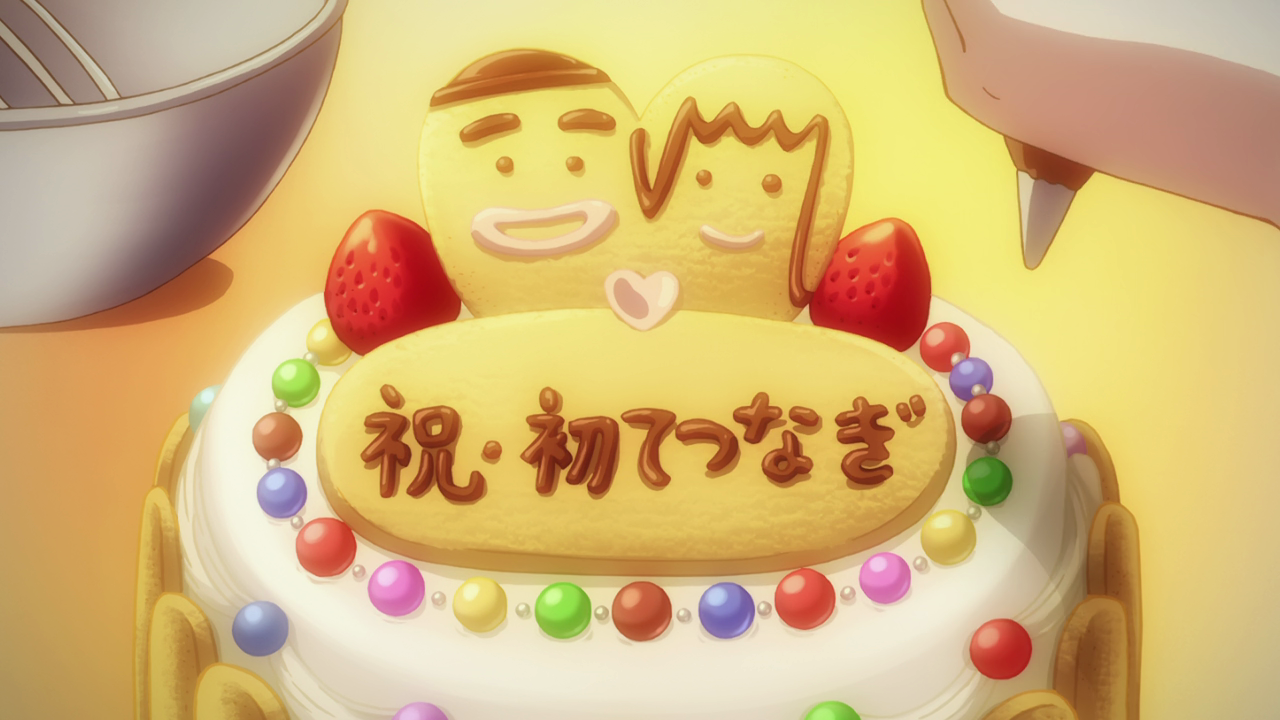 While both Takeo and Rinko make for an endearing couple that is always bringing something a bit new to the table as the mismatched pair go about their lives, the supporting cast is also handled quite well. The story about the Red Ogre Who Cried, a Japanese children’s tale, is often mentioned as Makoto plays as Takeo’s blue ogre/wingman who not only helps him understand certain aspects about girls that he never would have thought of but also stands up for his friend whenever he can. To go along with Makoto we also have the surprising appearance of his older sister and even the couple’s parents get involved in something that has become a rarity in anime, helping give My Love Story!! a bit of extra life and character interaction. This is especially true in regards to Makoto and Takeo’s relationship as friends. More than a few times throughout the series we are told stories about their past and how they grew to be so close over the years, developing a “bromance.” 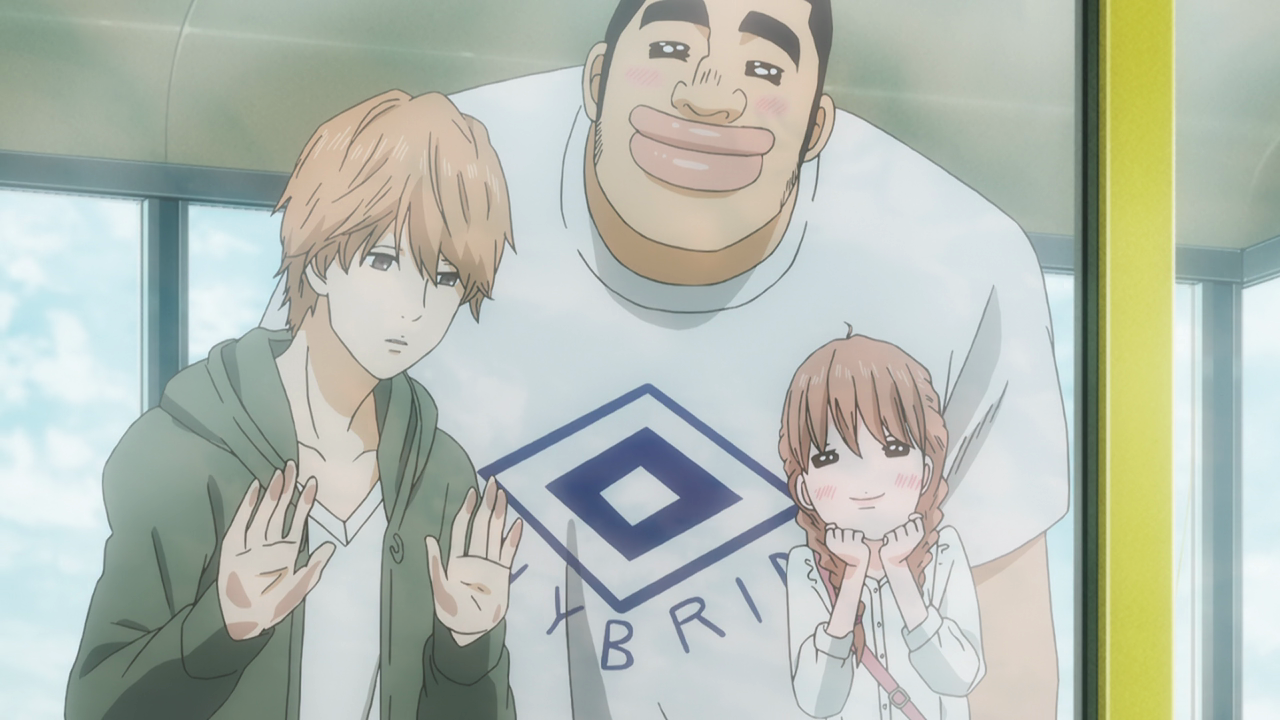 It also helps that, for the most part, My Love Story!! usually avoids many of the standard shoujo clichés that often rear their head. This makes it a series that those who tend to veer away from the genre will enjoy, especially if they love the comedic elements of Takeo’s boisterous nature, visual gags, and the pairing of the couple. That being said, the story does tend to throw in drama here and there and these elements do tend to pull out the old cliché elements such as a rival out of nowhere, jealousy due to poor communication, or some threat to the relationship. Thankfully these tend to be resolved quickly enough and often in heartwarming fashion, making this a series definitely worth trying out.

As mentioned before, one of the most common visual gags in My Love Story!! comes from the fact that Takeo is so much larger than the rest of the cast. Not only does he often tower over the boys, but his girlfriend Rinko stands at half of his total height. This is often represented by the fact that he has to duck through standard openings or can easily pluck someone off the ground without any issues. The size disparity works well alongside the fairly standard shoujo elements that appear from time to time. 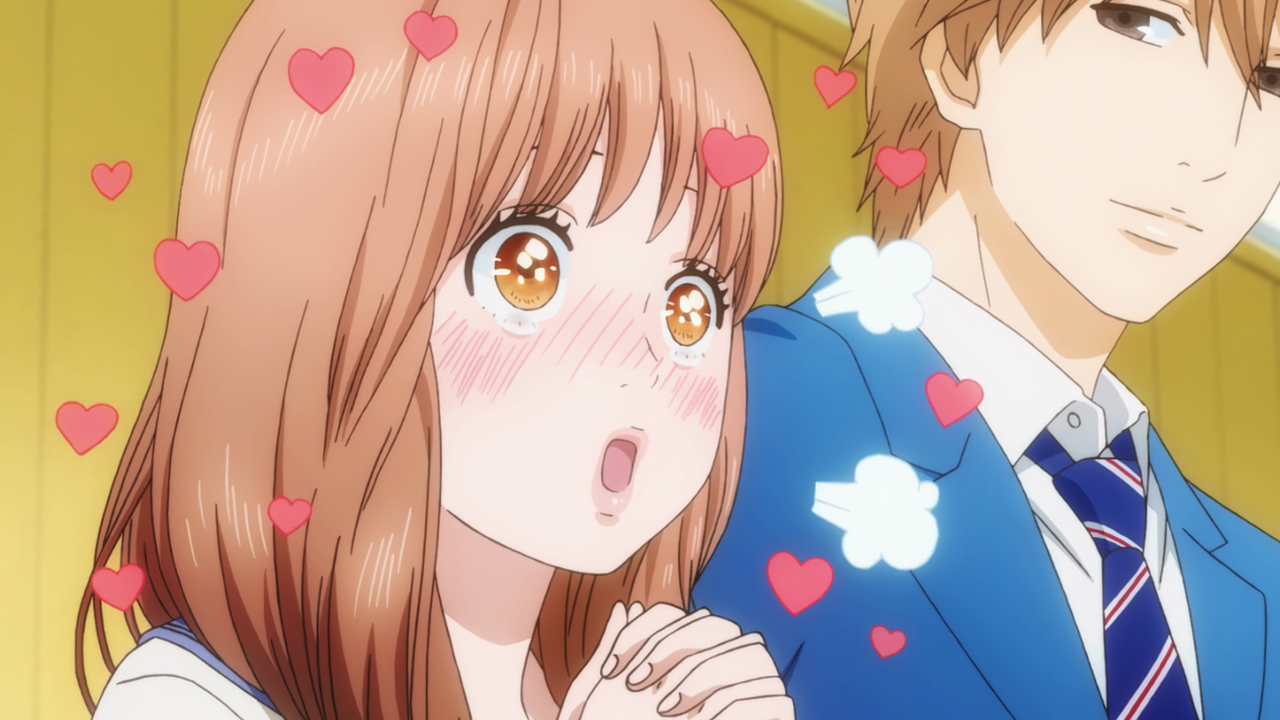 While these shoujo scenes, where the backgrounds turn all colorful and sparkly while focusing on the main couple, are used often and are a standard trope in the genre, the amusing faces that Takeo generally makes when he is embarrassed help make up for this fact. Overall though viewers should be prepared for a series that is commonly uses pastel coloration to highlight important scenes and more softer tones for standard scenes with Takeo being the only character really given special treatment to help make him stand out even more.

My Love Story!! has been released in North America with both the original Japanese voice track as well as an English dub track giving viewers both options. The voice work in the series is handled nicely by the English cast with Andrew Love performing admirably as the larger than life Takeo and Tia Ballard fitting the role of the shy but often eager Rinko. There may be those who prefer the original Japanese but those who prefer the English option will find no problems here. 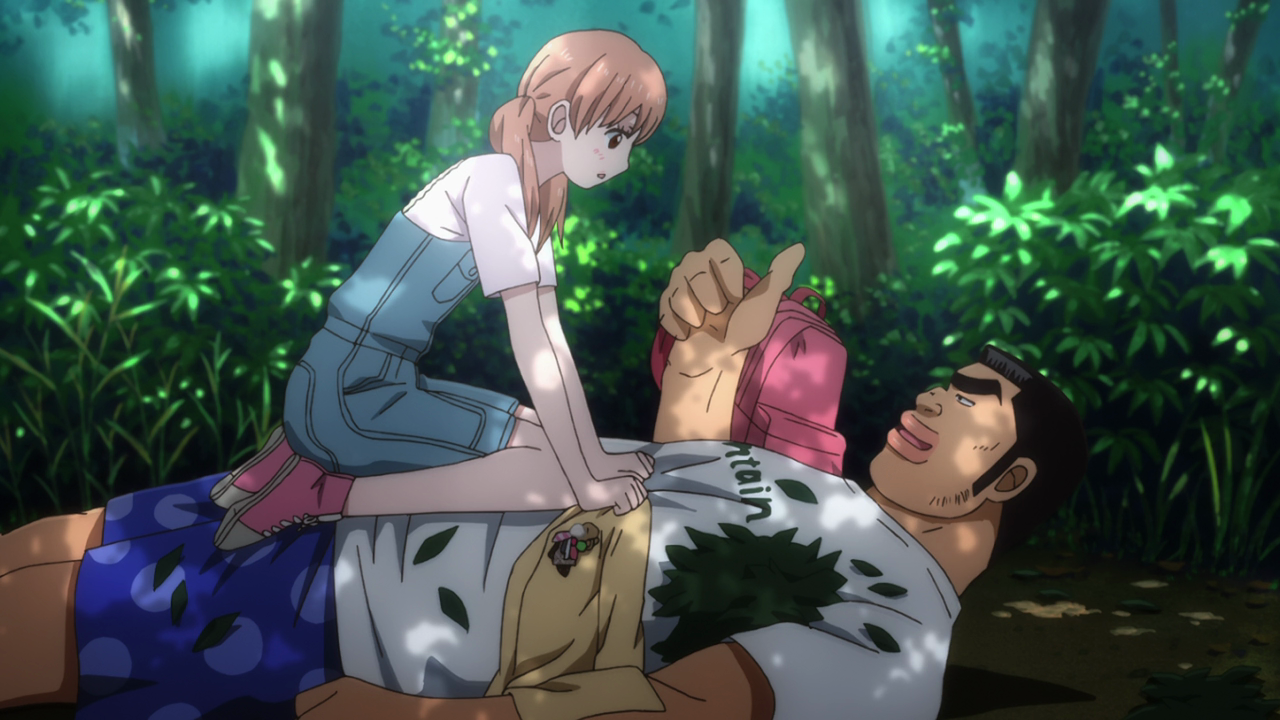 The soundtrack for the series is fairly standard one for a shoujo based series while the opening and closing theme songs actually work well in regard to the relationship between the characters. The opening song “Miraikei Answer” is performed by Trustrick and both sounds and is represented with Rinko chasing after Takeo while the ending theme Shiawase no Arika” by Local Connect is more along the lines of Takeo’s viewpoint to the relationship. That being said, while the songs and animations pair well together, neither theme really stands out in any memorable way.

Unfortunately Sentai Filmworks has only offered the release of My Love Story!! with the predictable bonus features that include clean versions of the opening and ending animations as well as trailers for other releases from the company.

There are many elements of My Love Story!! that may initially make it feel like something Western fans have seen before as Takeo’s imposing stature and exuberant attitude may liken him to the “Beast” but his extremely kind heart and willingness to go the extra mile for anyone as well as the love story that forms between him and Rinko create a romance story that rarely feels like something we have seen before. With plenty of great comedic moments of all kinds, touching romantic developments, and a pair of characters you genuinely want to root for My Love Story!! is definitely a series you do not want to pass up.

My Love Story!! bucks many trends that rule the shoujo genre and offers a touching romantic story that will leave you laughing and routing for the main couple throughout the series.
9