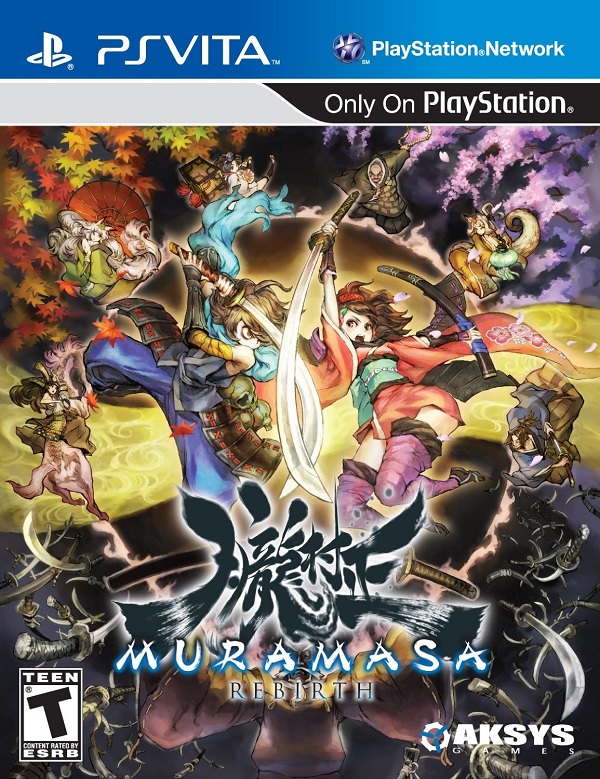 Overview
A few years ago, bringing a slightly upgraded version of a game to another platform was something brand new in the industry but nowadays it is becoming common practice. However rarely does a title feature a complete shift in publisher and translation via this transition. Originally released back in 2009 by Ignition Entertainment on the Wii, Muramasa: The Demon Blade has now been brought to the PlayStation Vita under the name Muramasa Rebirth. Only now, Aksys Games is behind the reigns of the title, the question is though; does this Vita version deserve your attention?

Story
The story of Muramasa Rebirth has been unaltered from the original version of the game which means that there are still two story paths to play through. The game takes place hundreds of years ago in feudal Japan and the powerful swords created by Muramasa over the years have become highly valuable killing tools, creating battles amongst the various warriors attempting to own said blades. As demons run rampant and the souls of the helpless fall beneath demonic blades, two warriors move amidst the bloodshed towards their own goals. 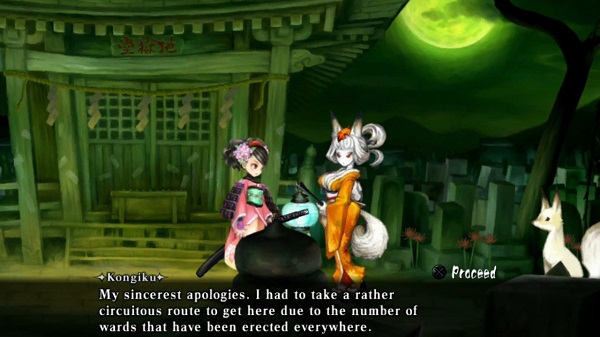 As mentioned earlier, players have the choice of either selecting either Kisuke, a ninja who has lost his memories and is seeking revenge, or Momohime, a princess who has been possessed by the spirit of a warrior attempting to further his life by possessing someone else, only to be stuck in the body of Momohime. While these stories are individual, they do feature a few crossing points.

It is worth noting that there are still multiple endings for each of the characters, giving the already decent gameplay length of each story an extra boost by providing additional endings per character. Considering the amount of dialogue in the game there is quite a lot of exposition throughout the game and some knowledge of Japanese lore can be required to understand everything going on but for the most part the story gives us plenty of motivation to keep moving forward.

Visuals
For those who may not know, Muramasa Rebirth is made by a certain studio in Japan named Vanillaware. Those who have heard of the company will likely know what to expect while those who haven’t will be in for an amazing treat as Vanillaware creates some of the most artistic and beautiful looking games through pure artistry. 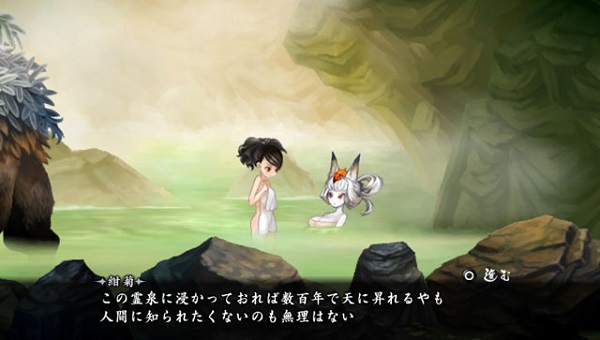 The common trend in video games is to either make something extremely realistic or very un-realistic with strange proportions, anime graphics or something else but Vanillaware presents Muramasa Rebirth as something of a work of art. Every environment and character that the player comes across looks like it was pained on an oil canvas thanks to the impressive level of detail that has went into every visual aspect of the game.  It is worth noting that some enemy types do become a bit repetitive but the outlandish looks of the boss enemies you encounter during your time in Muramasa Rebirth more than make up for the limited enemy types.

Audio
It is worth noting that Muramasa Rebirth has not been given an English dub of any kind, rather than that Aksys Games has re-translated the title into what can only be described as a more accurate version of the original Japanese dialogue. As such, the voice work, of which there is an abundance of, in the game is entirely Japanese but this is fitting for a title steeped heavily in Japanese mythology and landscapes. 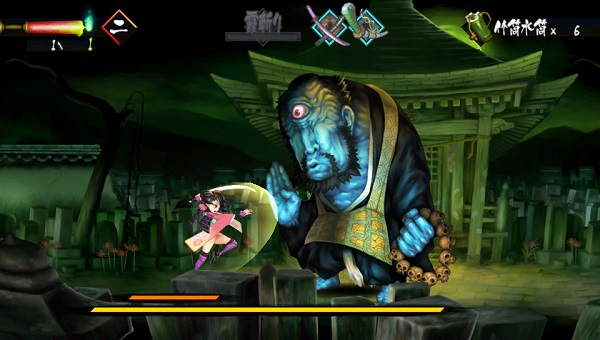 As far as background music goes, the title has a number of fitting tracks, which work well whenever the action picks up and provide a soothing feeling whenever the player is simply exploring an area outside of combat.

Gameplay
Muramasa Rebirth may seem like a rather straightforward action game at first, but it tends to be quite a bit more complicated than that. Before beginning the game players are given the choice of two difficulty levels and it is worth noting that the easier option does dumb down the difficulty of the game quite a bit, removing some of the challenge so gamers looking for the full challenge will want the latter option.

The reason for this is because despite featuring rather straightforward hack and slash combat, players will need to balance switching through the three swords they can equip at any given time to make sure that none of them break during battle. You see, swords have a strength meter which rises as spirits are absorbed from the environment and defeated enemies and this meter is depleted whenever special attacks are used related to the blade as well as blocking. A broken sword not only cannot be used for defense but it barely does any damage to enemies.

Plus, switching between blades in combat can allow the user to cause damage to every enemy on the screen when done at the proper time. Plus, there are two types of swords available for use in the game, a normal samurai sword “blade” which is used for stringing together long combos and moving quickly around the area via dashes and a long sword which is slower but deals more damage and caries a sense of momentum when swung, allowing for more enemies to be hit by the blade. This means that sometimes switching between these blades can be crucial to defeating specific enemy types. 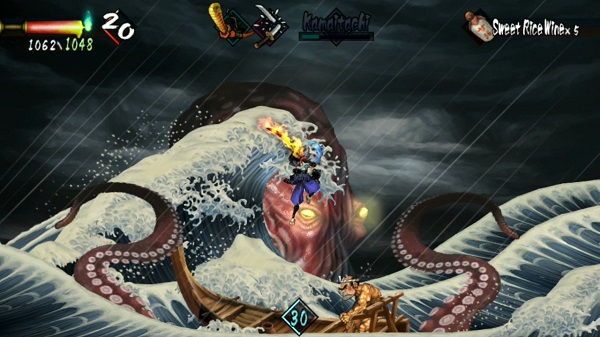 The combat difficulty is alleviated somewhat thanks to the fact that players now have the ability to customize their button actions, allowing for more a more comfortable playstyle, but as far as the Vita’s touch screens go there are no options available to use these and it is likely for the best as the fast paced action of the combat requires the precision of simply pressing buttons.

Alongside basic combat Muramasa Rebirth features some minor RPG elements by giving players experience points for enemies they defeat and allowing them to level up, which raises various stats and allows the player to equip stronger blades. In fact, there are over a hundred blades available for use in the game, many of which can be forged by collecting souls from defeated enemies and eating food to keep your spirit up.

The food not only serves as a way to create items, but also a way to heal damage and gain temporary stat bonuses by cooking food with acquired ingredients from the world. If there is any drawback to Muramasa Rebirth’s style of combat and the ability to explore multiple maps in a short amount of time it is the fact that many of the environments you travel through don’t feature any enemies and while the game is gorgeous looking, traveling through numerous maps with nothing happening can be a bit problematic. 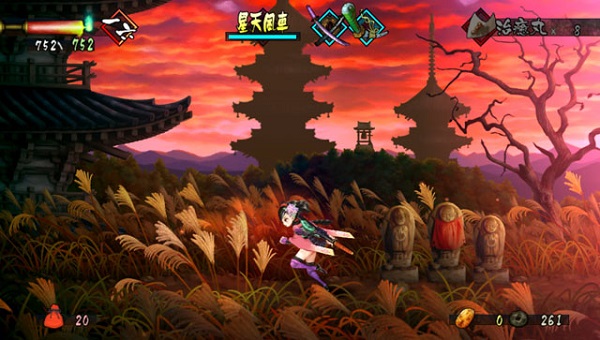 It also is troubling that there is a decent amount of backtracking to be had in Muramasa Rebirth. As players unlock various blades that can cut through barriers that were blocking previously inaccessible areas and given the fact that the Vita is a portable system and there is no option to save anywhere. This means that gamers may find themselves stuck backtracking through an area and nowhere near a save point when they have to put the handheld in their pocket or quit out without saving when their attention must be turned elsewhere.

Overall
Muramasa Rebirth features everything that the original title had all wrapped up in a much prettier and easier to access package than before. With a simpler control scheme, plenty of replay value, a gorgeous art style that is only accentuated by the fact that the Vita’s screen presents it perfectly and deeper than average side-scrolling action, Muramasa Rebirth surpasses the original in every way and sits comfortably as one of the best and most stunning action games on the Vita.