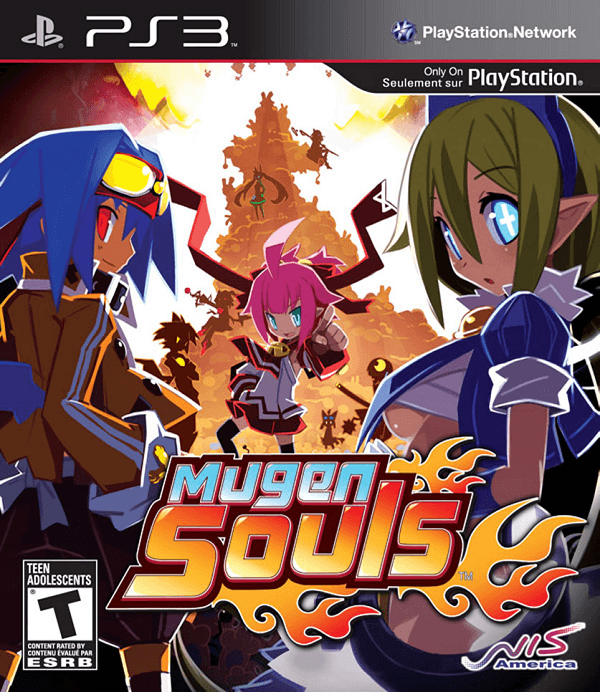 Overview:
Games with a simple and mundane storyline are a dime a dozen nowadays. In fact, even games which focus on fantastical worlds have become quite similar to one another with only a few shining gems every now and then. Now what happens if you were to take everything sane and understandable about your standard RPG storyline and throw it right out the window? Well you may get what NIS America has worked on bringing over to North America, Mugen Souls. Will the crazy and overwhelming aspects of Mugen Souls create a game worth experiencing? We shall see.

Story:
The story of Mugen Souls follows a girl named Chou-Chou who claims that she is the Undisputed God of the Universe. As such she announces her plans to conquer each of the seven worlds in the galaxy, each one with a special theme, such as Sun, Moon, Fire etc. Chou-Chou is quite gifted despite knowing little about her past and she possesses the unique ability to not only transform practically anything into a peon, but also the ability to change into eight different forms with various personalities. 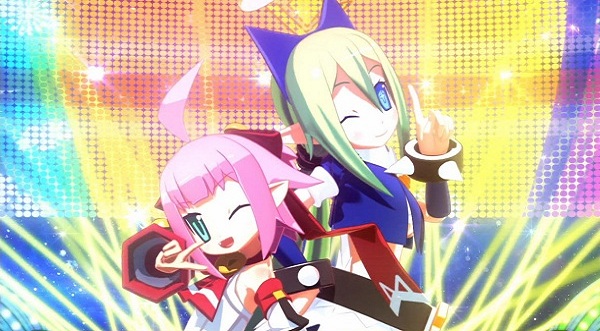 Now Chou-Chou isn’t alone on her mission to conquer each of these planets as she is also joined by a boy named Ryuto who became Chou-Chou’s first peon by giving her his air ship and the angelic Altis, a demon girl who was reborn as an angel thanks to the fact that all of her “evil” deeds turned out to be righteous miracles. As Chou-Chou sets her sights on the galaxy, can this girl turn everyone on these planets into her peons and become the true God of the Universe?

While Mugen Souls’ storyline may sound like a strange one at first, since it is rare to find a protagonist ready to conquer the galaxy, but it quickly grows on the player as not is Chou-Chou’s optimistic and egocentric main personality infectious, but all of the characters in the game all have their own unique personality quirks. In fact, players will be hard pressed to guess what will happen next in Mugen Souls thanks to the fact that not only is the story out of this world, the characters are just as overwhelming! Not only do we have a rather perverted Ryuto and the sinister but sincere Altis but players will encounter a number of other strange characters on their journey as well, some just as humorous as the last. 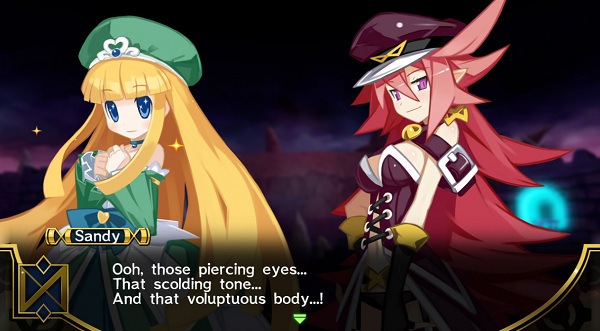 It also helps that the original objective of conquering each planet, while still one of the main goals, is also slightly overshadowed by the mysteries of Chou-Chou’s past and the possibility that another person with the same abilities as her is in the same galaxy. Place interesting characters, an unbelievable plot and plenty of sections that make fun of standard RPG tropes together and you have a story worth playing through for more than just laughs and moe situations.

Visuals:
The art style used for Mugen Souls is rather interesting thanks to the fact that all of the characters in the game are presented in chibi-form. This means that as you explore the field, fight in battle and explore your G-Castle, your character will be shown in a chibified state with only minor detail and some rough edges. Enemies are presented normally though most monsters still have various cute aspects about them that help them match the game’s aesthetic style but can also appear rough at times. This chibi character style surprisingly works well given the fact that so many of the character’s attacks and animations are completely over the top and they would appear absolutely ridiculous with realistic proportions.

This chibi style only helps highlight how impressive the character portraits in the game are. Now every time a talking segment appears in the game, the speaking characters’ portraits are presented with high levels of detail and in these segments you can see exactly how the characters look outside of their chibi forms. These portraits are partially animated with minor movements and position changes depending on the emotions being portrayed at the time. 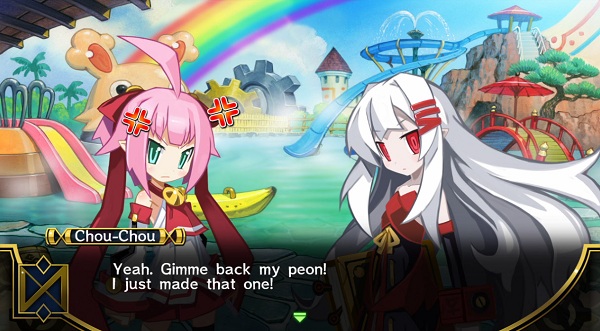 It is worth noting that there are also some impressive CG scenes presented every so often in Mugen Souls. It is worth noting that these scenes often contain some decent levels of fan service though there never is any risk of nudity within the game and steam censorship seems to have increased. Also a one of Chou-Chou’s personality’s name has been replaced with an English equivalent, with tsundere becoming bipolar, though this is relatively minor in the grand scale of the game.

Audio:
As with most of NIS America’s releases, Mugen Souls contains both the original Japanese voice track and the new English dub. The Japanese voice track is suitable enough, though using the English dub is highly recommended as the English voice work is impressive. This is especially true when it comes to Chou-Chou’s various forms and the way that her voice changes to more appropriately fit her current personality. It is worth noting that while most scenes are voiced; basic story sequences that aren’t presented with visual novel character portraits are not. It is also worth mentioning that when the player creates a custom Peon of their own, only Japanese voice work is available for these characters. 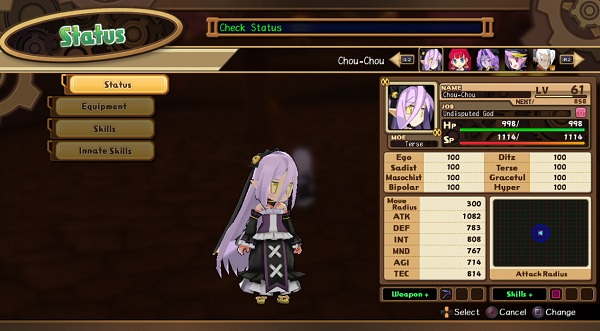 As far as the game’s soundtrack goes there is a pleasant combination of background music as well as combat music that actually has lyrics to it which is a bit surprising considering most background music for games such as this is only orchestral. That being said, all of the songs in Mugen Souls are J-Pop so if you aren’t a fan of that type of music than perhaps you may disappointed, but for everything else these songs  do wonders for the scenes that they play in.

Gameplay:
At the most basic level, Mugen Souls is a relatively standard RPG which allows the player to venture out with four party members and take on enemies that are always visible on the world map, not random encounters. When the player enters battle, they will be able to move around the battlefield and attack enemies within their range as each character’s turn to attack arrives. However this is pretty much where Mugen Souls changes from being a standard experience and begins to change into something unlike you have ever played before.

Now while Mugen Souls may have plenty of standard things you can perform in battle such as basic attacks and a number of different skills which vary depending on the type of weapon you equip as well as the character itself, that is where the basicness ends. Whenever you perform a basic attack and one of your teammates’ turns is right after the current character’s it will trigger a “Link Attack.” 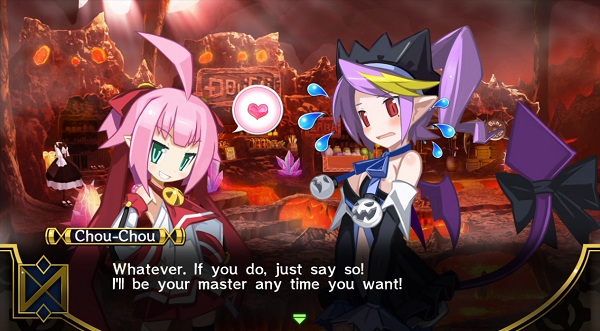 These link attacks allow the selected character to team up with one, two or all three of the other party members to perform a combo attack. What makes these combo attacks special is simply how outrageous they are. Not only do they do more damage, but they are some of the craziest things around, with all of the characters either hopping into tanks to shoot bullets at an enemy, slingshotting themselves into an enemy or forming a spiral tower with the enemy that smashes against meteors and into the moon. While these moves are zany and can kill an enemy easily, it is worth noting that their animation sequences are rather long compared to basic attacks and skills, meaning some basic fights can last a lot longer than they should if the player performs multiple link attacks.

Outside of that, there are also crystals which are spread throughout the battlefield which apply various effects to party members and enemies in range. These can be simple bonuses such as higher attack, or negatives like the game ending if the battle isn’t finished fast enough. Interestingly enough, players can perform “Launches” with skills which will send an enemy flying across the battlefield. Launched enemies can be hit into these crystals and when one breaks, the battle will enter Hyper Mode which adds more effects to the field and raises the tension in a battle. It is worth noting that the game does have some slowdown issues in battle, where inputted commands can take a few seconds to activate. 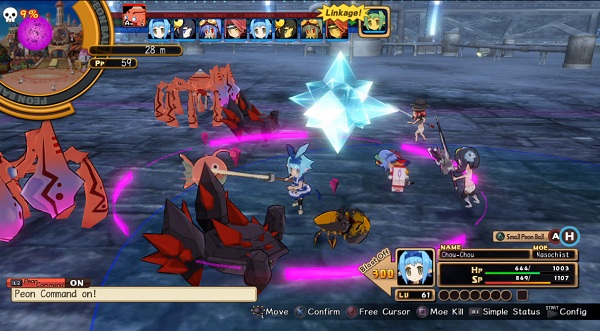 One of the key features to battle in Mugen Souls however is Chou-Chou’s ability to perform “Moe Kills” on enemies. Now Chou-Chou possesses the unique ability to change into multiple personas, each one with a different appearance and personality. With these different personalities she will perform various “Moe” sayings, which if you are an anime fan you will recognize instantly. As you fight against enemies Chou-Chou can try and sway her opponents into becoming her peons or changing into an item, removing them from the fight by playing on their weaknesses. However there is also a chance you can make the enemies even stronger, so Moe attacks quickly become a double edged sword. 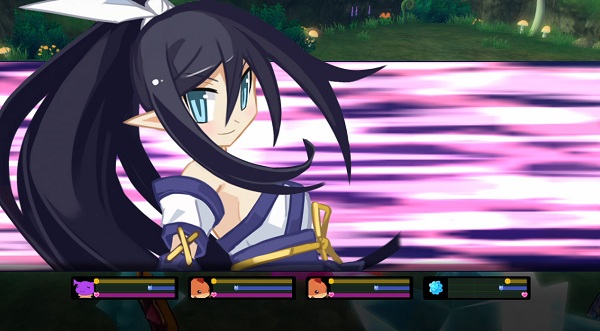 Outside of navigating the various worlds that Chou-Chou wishes to conquer, players will also enter into special air ship battles where the player must fight against other space ships in turn based combat. Chou-Chou’s airship, the G-Castle, will gain in strength as you gather more peons so it is worth noting that it is possible to run into a wall if you haven’t performed many moe kills in the past. These air ship fights are pretty simple to understand as various attacks have various effects, such as basic attacks, defense that absorbs enemy attacks, fast attacks to deal minor damage early and so on. These battles are a nice change of pace and can be very unpredictable.

As with most games, Mugen Souls features a rather simplistic central hub in the form of G-Castle and here players can purchase various equipment, dress-up items for their characters, create new peons for use in the party and even take a bath in the “Hot Springs” for a stat boost. The customization options for peons are rather expansive and enjoyable, though I found it better simply to stick with the main cast. As for the Hot Springs, players should note that they were censored in this release and they simply provide the various temporary stat boosts without the Japanese release’s bathing mini-game. 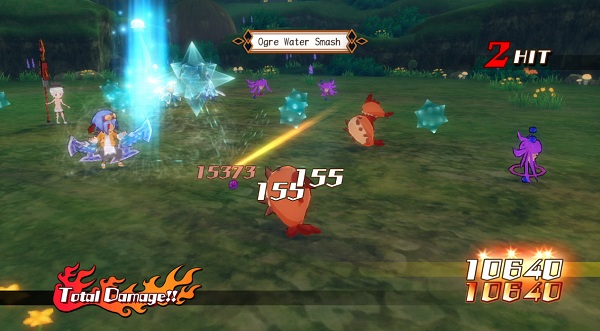 Finally in the G-Castle players can enter the Mugen Field, which is essentially the area that players can grind for levels at an easy rate. The Mugen Field allows the player to fight battles continuously with the occasional boss battle or air ship battle breaking up the normal fights. The Mugen Field also contains a Mugen Store every ten or so levels where the player can purchase special bonuses for their character, increase the level cap or even unlock special abilities. It is worth noting that there are occasionally times that the fighting in the Mugen Field seemed necessary simply so that my party was strong enough to continue the story, so Mugen Souls does contain a fair bit of grinding.

Overall:
Mugen Souls a game that, when first seen in Japan, you would never have thought would make it to Western shores. However now that NIS America has brought the title over we can celebrate the fact that the title is not only a great time but it is also one packing some new interesting gameplay mechanics. With only a few issues holding it back, Mugen Souls contains a number of gameplay mechanics that most, if not all, gamers will be experiencing for the very first time in what can easily be called the zaniest game this year.