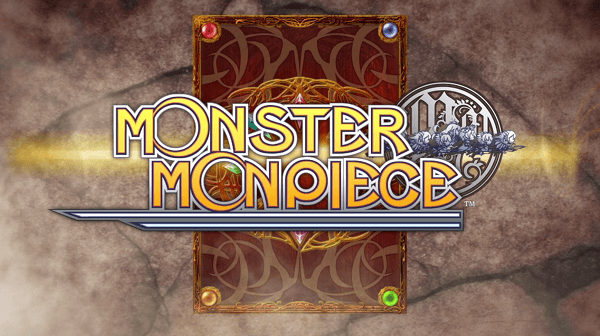 Overview
There are games released in Japan that will have people joking about how it will never be released in the West and then there are games like Monster Monpiece, a title that became famous for having people stroking their PS Vitas rapidly and making use of the touch screen and pad in ways that people expected but hadn’t seen yet. Despite the odds, Monster Monpiece is now available in English with most of its fan-service elements intact. The question is, is there a worthy game beneath all of the monster girls and bouncing breasts?

Story
In the world of Yafaniel, God created humans but when humanity became too big for its own good, this same God created monsters to reign in the humans. However when the monsters began running unchecked God struck down the monsters, forcing them into the bodies of humans, thus creating Monster Girls. Now humanity lives alongside Monster Girls, sharing a mutually beneficial relationship.

Monster Girls reside in cards to avoid running out of magical power which is replenished by Magus Quartz crystals in each major city. In one such city a young student named May is training to become an elite master of monster girls alongside her best friends Elza and Karen. May isn’t the strongest in her class and can be hesitant at times, which is why when the opportunity for an intercity duel arises, her teacher pairs her up with the monster girl Fia who is eager to charge ahead and serves as a good balance for May. 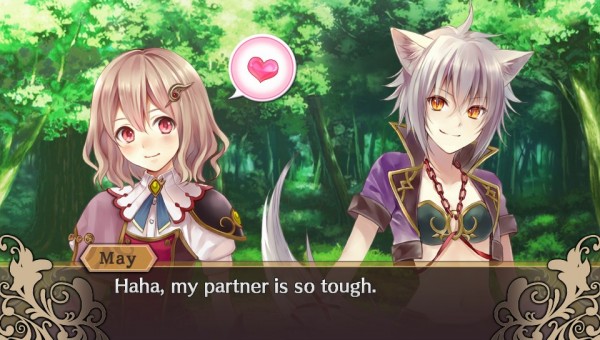 However before they are able to enter this tournament, May, Elza, and Karen run into a strange masked woman who transforms Elza into a “Lost.” By becoming Lost, Elza is now attacking every city and trying to steal their Magus Quartz and only May and Karen can try to stop her by getting to these cities first and gathering the crystals for safe-keeping. All in all, the story of Monster Monpiece is fairly simple at its core but one that is enjoyable thanks to a likable cast of characters, especially May and Fia, and how the light story stays serious when it needs to be while also providing humor and great character interaction in equal amount.

Gameplay
When players aren’t watching visual novel style dialogue sections or picking a travel point on the world map, they will be battling using the game’s card combat system. Before we go further let me say that while Monster Monpiece could have sold itself to many just on the concept alone, it has managed to bring with it an enjoyable card battling system.

Players are given the option of using any forty cards they wish, with these cards found either exploring the map, receiving card packs from defeated opponents, or purchasing them through the store. Building a deck is a fun endeavor as players have numerous factors to consider thanks to a few gameplay mechanics that players will need to master to conquer some of the more difficult AI opponents and stand a chance online. 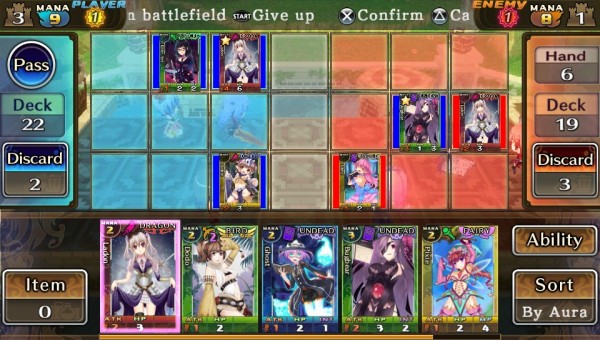 You see, the card battles are held on a 3 x 7 grid with each opponent having a 3 x 3 zone of their own where they can place a card and a 3 x 1 neutral zone in-between the two. Each turn a player will recover a certain amount of mana, which is used to summon Monster Girl cards into battle. Once these cards are placed they will transform into a chibified version of their card type and begin to advance forward whenever the player ends their turn.

When moving forward these cards will attack anything in their way with the true goal being to attack the opponent’s castle to win the match. Now while this may sound simple, and it is at its core, things can get rather complicated but in a good way considering there are a number of tutorials explaining things. You see, each card not only has a certain color border, which is called an Aura, but they also have various species such as Fairy, Demi-H, Dragon, Beast, Bird, and more, as well as card types such as melee, ranged bow attackers, healers, and buffers. 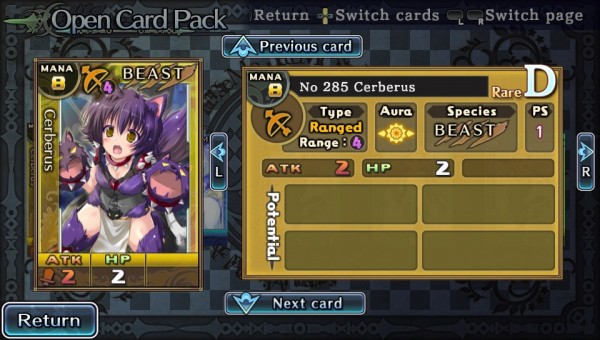 There are numerous cards to choose from in the game and each one has their own unique strengths and playing smart will deliver the player power ups. You see, playing three blue aura cards in a row will not only provide the player with extra mana, but also give each of their cards on the field a boost in health and attack power. Along those lines, if the player has a beast type card on the field, they can also take a beast card from their hand and perform a fusion with the card on the field. This can be done anywhere, even in the enemy’s territory, and adds that card’s health, attack, Int/MP, and any abilities that card might have.

This can create some rather powerful combinations at times, as having a fused dragon melee type that is being backed up by a fused ranged beast that is being buffed by a fused undead can make for some outrageous attack output if you can put it together properly. There is a layer of complexity here that many fans of the TCG genre will get a big kick out of and it also helps that the AI can put up a fight. The difficulty varies between opponents and some boss battles may be easier than standard fights depending on how they are handled and what cards come into play. Then again, sometimes the AI spends too long trying to build up mana rather than stop your advancing forces which can be a rather dumb move at times. 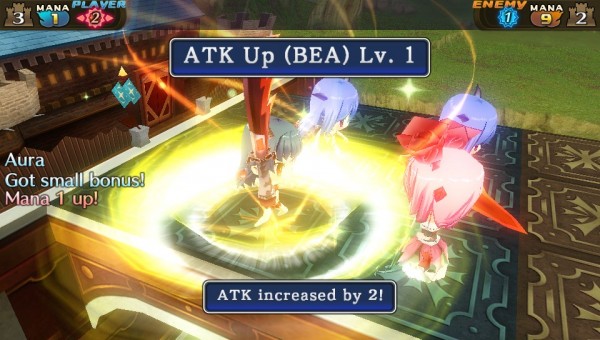 I can also say that the online component to the game works quite well. Monster Monpiece can be played locally through ad-hoc or in online rooms where players can test their decks against other players’ cards. These battles are held to timers between turns so no one can drag it out for too long and each of the matches I played were handled without any lag, though opponents really like to forfeit if they find themselves being overrun early. Players can even earn special rings that, when all are collected, can be used to unlock a special item for the main game.

Now, there is one aspect of the game that Monster Monpiece became infamous for when it was revealed in Japan and that is the leveling system, or as the game calls it the “First Crush Rub.” By defeating opponents you gain rub points which can then be used to level up cards which literally involves rubbing the Vita. In these moments players will need to hold their Vita vertically and also shown a zoomed in version of the chosen monster girl, and while moving the camera with the right analog stick they will need to rub, poke, and pinch the screen in various spots along the girls’ body to raise a meter that will level that card up. 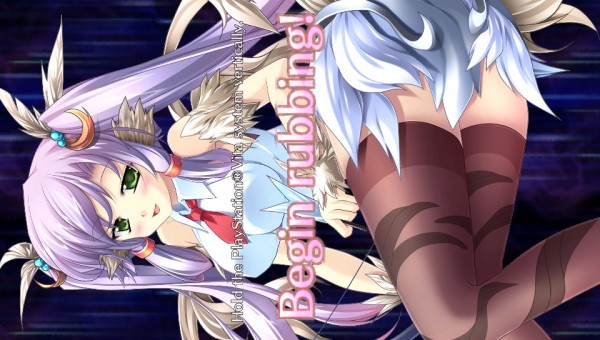 When said card levels up, there are usually benefits in the form of more attack or less mana to summon, but stats can also drop so you may want to hedge your bets at times when it comes to leveling up your favorite cards, even if doing so means that the girl on said card will be losing some of her clothes in the process.

Visuals & Audio
Before we get to the fun part, the chibi models of the Monster Girls are simplistic looking on the battlefield with some variation between types, though more variation would have been nice and the game’s visual novel aspect is presented with some great looking character portraits and there are even a few CGs that can be found if the player looks around for them.

Now on to the fun part… or controversial part I suppose but for me it is the former. Monster Monpiece oozes with fan-service. Every character in the game is a woman and every card is a Monster Girl of some sort. The game features over a hundred cards and there are a large number of artists that have contributed artwork to the game, making some cards look a lot better than others, and each of these cards can be stripped down as they level up. 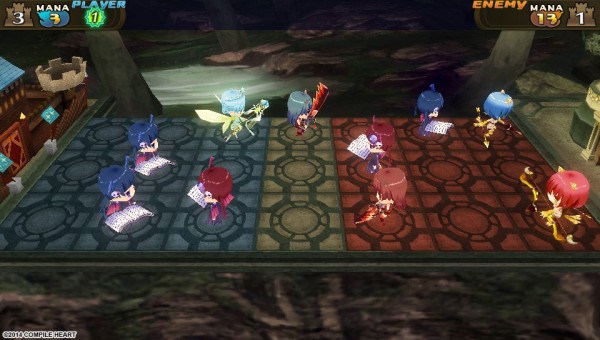 Some of the cards only lose one layer of clothing due to censorship, which can be an issue but is largely forgettable thanks to the sheer number of cards available for use. The cards generally start out fully equipped and as the player levels them up, they can go all the way down to their underwear and while there is no nudity in Monster Monpiece there are plenty of suggestive looking poses for those who are looking for that.

It is worth noting that this is Idea Factory International’s first time localizing a title and there are a few issues in the game’s translation. A few wording issues appear here and there and while this isn’t much of a problem since the game is voiced entirely by a superb Japanese voice cast, these translation problems do stand out a bit. 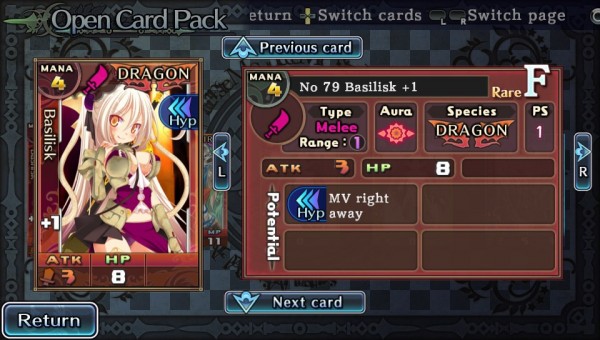 As mentioned the game sports a full Japanese voice cast for the main characters while there are various voice types used for cards and these voice types determine how a card will sound in the First Crush Rub system. The background music in the battles changes depending on your area and they range from forgettable noise to songs with vocals that really stand out.

Overall
Monster Monpiece could have tried to go for a shallow experience where players spent their time gathering cards and stripping them down with the rubbing system, but it went beyond that by actually delivering an enjoyable card game with plenty of depth and customization to allow the player to create a deck to fight against others. While I didn’t have any problem with it, some may find the lewd nature of the game’s rubbing system and pictures a turn off and the censorship is noticeable for some cards, but for those who enjoy themselves some fan-service Monster Monpiece delivers not only that but a fun card game as well.