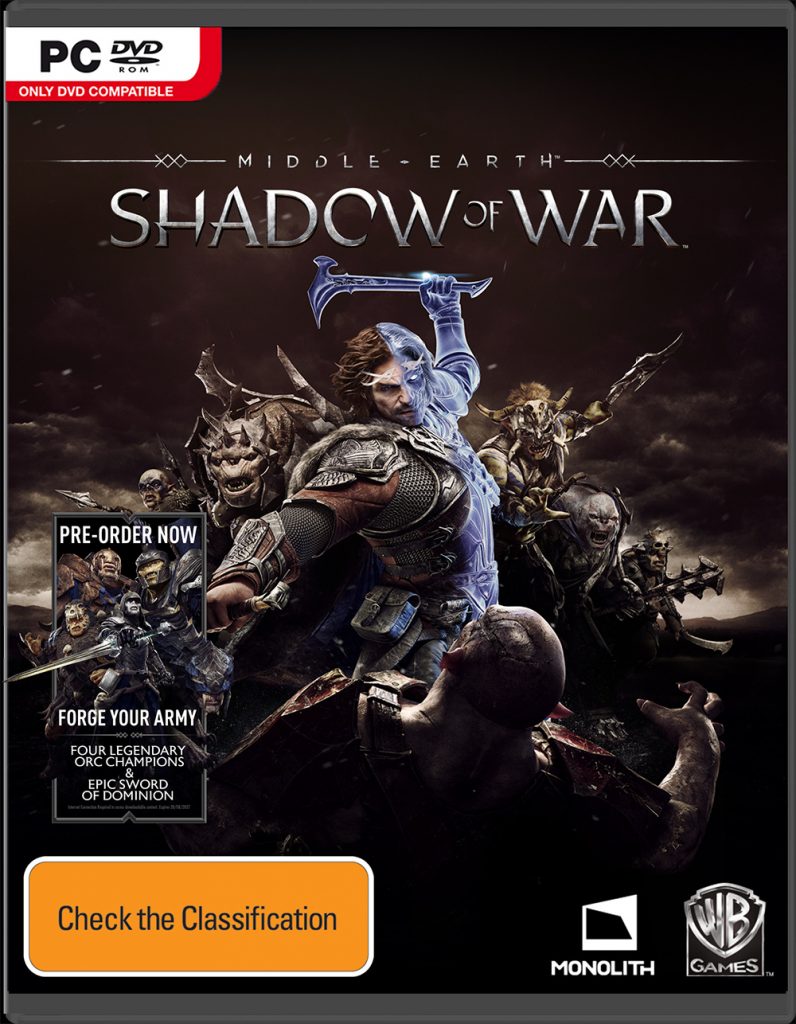 Middle-Earth: Shadow of War continues the adventures of Talion the Ranger and Celebrimbor the jewelcrafter. With Sauron marching upon Menis Ethil, Talion and Celebrimbor must find unlikely allies to build an army to defeat Sauron. The sequel builds on Middle-Earth: Shadow of Mordor to include a follower system that intertwines with the series’ signature Nemesis system and a larger world to explore.

The Middle-Earth series is set in between the events of The Hobbit and Lord of the Rings. In Shadow of War, Talion gives up the Ring of Power to the spider queen Shelob in exchange for Celebrimbor’s safety. Without the ring, Talion and Celebrimbor must use the Palantir to find Sauron’s weakness in hopes of defeating Sauron once and for all. The Palantir is under the protection of the Gondorians at Minas Ithil. With Sauron’s forces attacking the gates of Minas Ithil, Talion and Celebrimbor are in a race against time if they ever hope to destroy Sauron. 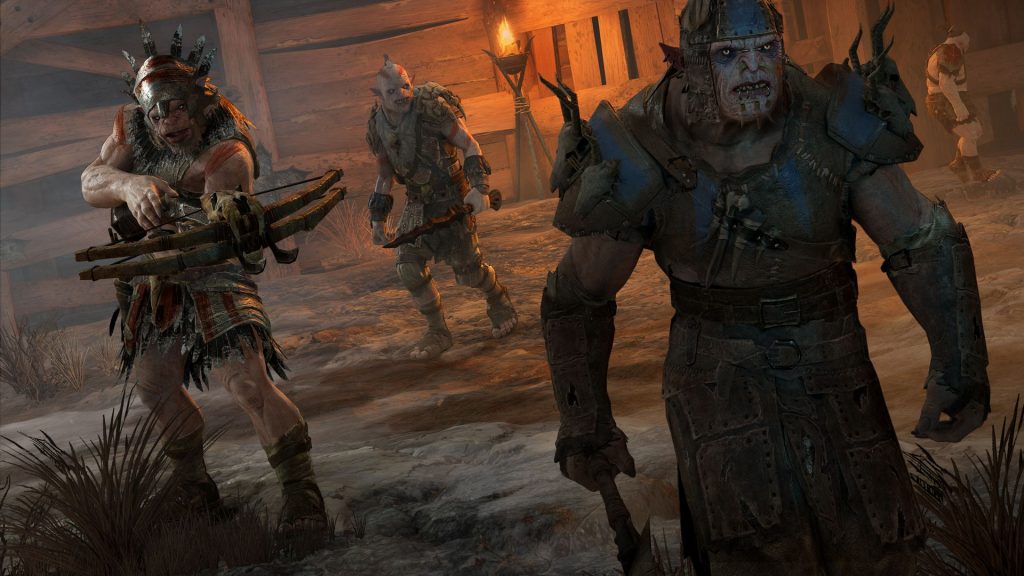 The writing in Middle-Earth: Shadow of War is enjoyable. The dialogue is sharp. The game’s serious tone is well balanced with lots of comic relief. I like the fact the writers pay tribute to Tolkien’s work by going beyond the usual prose and trying their hand at poetry. While the quality of writing will probably never match Tolkien himself, the writers of Shadow of War do an admirable job of channeling his style. The writing is probably at its best during the more lighthearted moments. While, Talion is a generally likeable character, Celebrimbor sometimes feels like a one-dimensional nag. On the other hand, the writers have clearly saved the best lines for the comic relief characters like Bruz the Chopper. Without spoiling too much of the plot, I looked forward to these characters’ appearances as I would often find myself laughing out loud.

Middle-Earth: Shadow of War is a hybrid of open-world action, stealth, and RPG. Talion has several skill trees, each providing new abilities for a different aspect of gameplay. Shadow of Mordor’s Rune system has been replaced with a more traditional system using equipment with gem sockets for modifiers. Rare gear and above will have an unlock challenge that will unlock an effect for that item for a nominal fee of in-game currency called Mirian. These effects are similar to runes in Shadow of Mordor and provide things like stat bonuses or add a status effect. In addition to the unlock challenges, equipment can be socketed with one of three gem types that gives a flat effect depending on the type of equipment socketed. Gems and Mirian can be looted from the many treasure carrying orcs in-game. The deeper RPG mechanic suits Shadow of War well as the more complex loot system gives players more incentive to chase down captains, who drive the game’s signature Nemesis system. 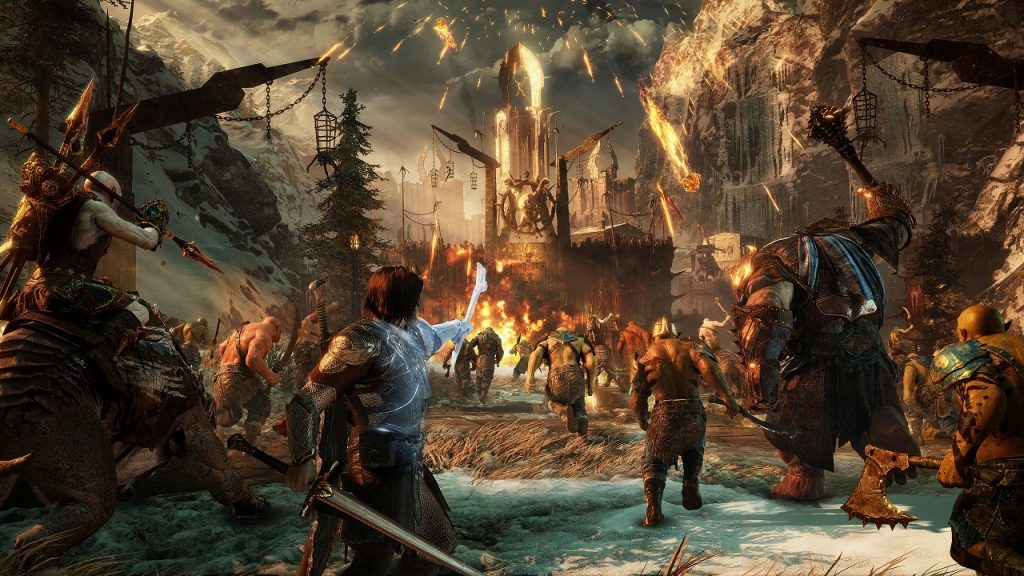 The Nemesis system has been expanded in Shadow of War to include the followers and conquests. Each captain has a unique set of strengths and weaknesses that must be factored into all contact, whether Talion is doing the dirty work himself or a follower is sent in his place. Recruited captains can be assigned to work their way up the ranks of Sauron’s army as a traitor or serve as the player’s bodyguard. Followers can be summoned to assist in battle or may randomly step in and save Talion’s life by killing off an enemy attempting to execute Talion. Of course, Monolith has added new reasons for captains to ambush Talion, including followers who have decided that it’s time to make a power grab and kill the boss. The conquest system starts in act 2, allowing players to use their recruited orcs to attack Sauron’s strongholds. The stronghold missions are a more chaotic version of the usual stronghold captain assassination missions as players also need to worry about keeping their own captains alive. The additions to the Nemesis system are the logical next steps and work out very well. The opportunity for emergent storylines and serious grudges make for some entertaining gameplay.

Shadow of War’s combat is stellar. Players have plenty of options for dominating the battlefield, whether being the stealthy assassin, the rampaging cavalry, the acrobatic archer, or just the wild berserker hacking off orc limbs. The controls are not too complex, but the game emphasizes well rounded skills for success. Mechanics like captains becoming immune to any special skill the player relies on too heavily and allowing players to block two incoming attacks at the same time forces players to be flexible. The game’s combat is tightly executed and can easily cater to all types of players. 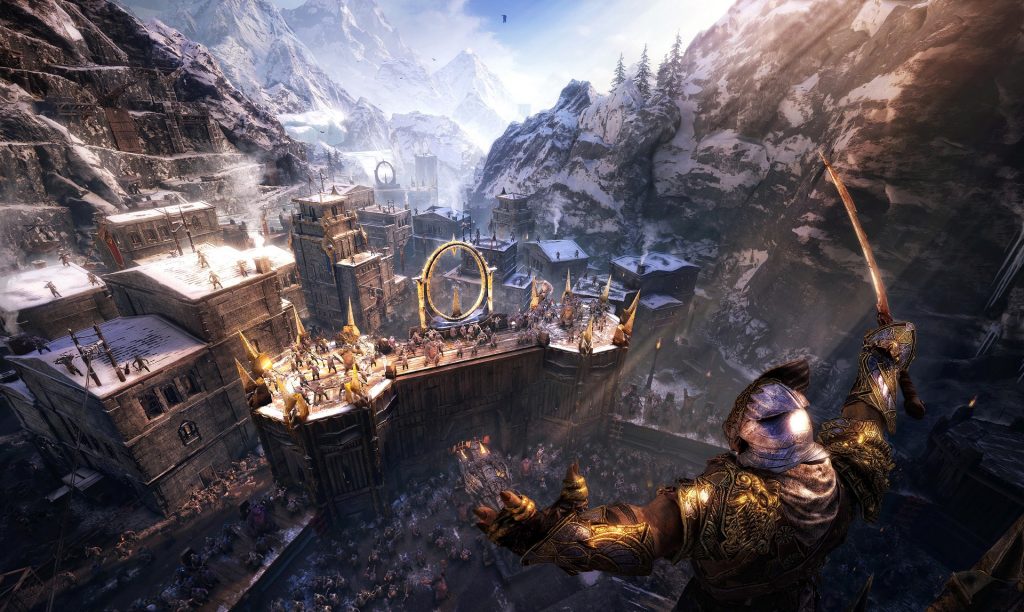 The controls for Shadow of War are excellent. The responsive controls are a major reason why combat feels silky smooth. The movement system is fantastic and feels fluid. While Shadow of War is probably best enjoyed with a controller, the keyboard and mouse controls will serve PC gamers just fine.

Debate about Middle-Earth: Shadow of War’s microtransactions has raged for months already and for good reason. Most gamers are hostile to the idea of a single players game with microtransaction based loot boxes. It is best to tackle the issue in two levels. First is the principle of having microtransactions in a single player game in the first place. On one hand, having such a system for a single player game incentivizes developers to create grind-heavy mechanics that encourages players to buy loot boxes and stretch out thin content. On the other hand, the age of that first generation of gamers who grew up playing video games is creeping ever higher. Many of us now jam in our video game time in between work and familial responsibilities. Time is now more precious than money and loot boxes are a way to skip quickly through the story. At the end of the end of the day, my stance on microtransaction is a little more nuanced than a hard line in the sand. Video game development isn’t cheap, and time is becoming more precious as the responsibilities of life mount. I think there is room for microtransactions to exist in games, but it must be done in a way that does not punish gamers who opt out. 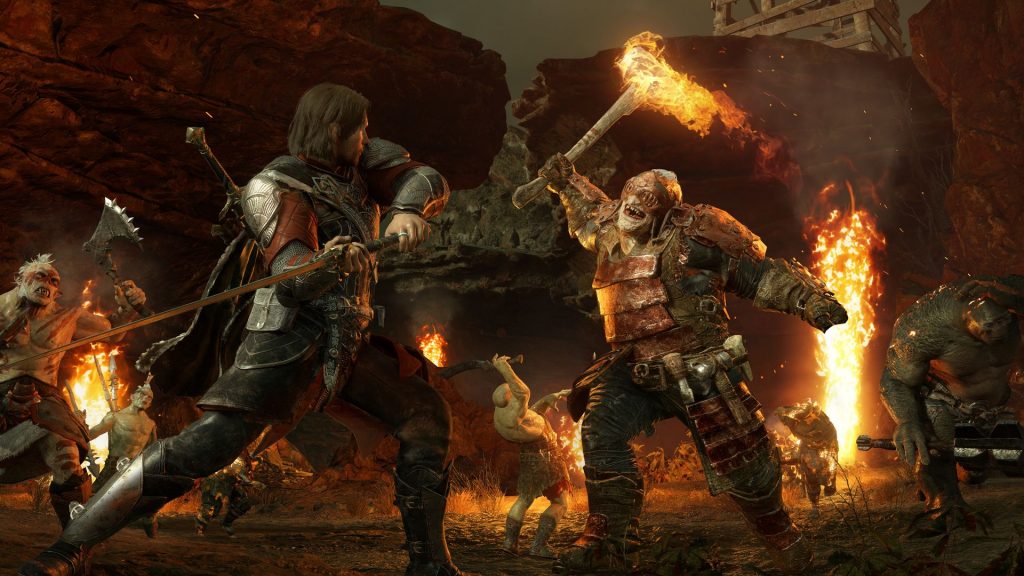 So instead, I prefer to look at the matter on a case by case basis. First off, Shadow of War allows players to opt out of the agreement in the beginning of the game and play offline. Next, Shadow of War has two currencies, an in-game currency used for things like equipment upgrades, reinforcements for the army, and standard quality loot boxes. The premium currency must be purchased with real money or earned by completing in-game challenges. Premium currency loot boxes guarantee a certain number of items at a minimum rarity. Additionally, boosters are also available to purchase for bonus XP gain. I generally find the loot boxes to be rather balanced. There are a lot of opportunities for players to get good gear by simply playing the game. In my testing, almost all my best gear came from going on vendetta missions against captains that had killed me or sending epic quality enemy captains with death threats to ensure the best possible loot table. All legendary quality equipment can be earned by completing an in-game task. The orcs are similarly balanced. Since all orcs have strengths and weaknesses no matter the rarity, it is still possible to land a rare orc that just has terrible stats. Players also have plenty of opportunity to earn more loot boxes by participating in the multiplayer raids and vendettas. More important than Shadow of War’s loot tables is how the game’s mechanics are balanced considering the use of loot boxes. I think Shadow of War is probably one of the easier games to integrate loot boxes into because of the Nemesis system. A large part of the game is the emergent stories that develop from long term nemesis. Much like Middle-Earth: Shadow of Mordor, players do need to go hunting for captains to really appreciate the nemesis system in Shadow of War, which inherently is a bit of a grind and suits the game’s microtransaction system well. However, there is still room for improvement. Knowing that the game has a bit of a grind to it, I would have liked to see more story missions to balance things out. While Shadow of War isn’t the perfect example of microtransactions done right, it is still one of the better examples. 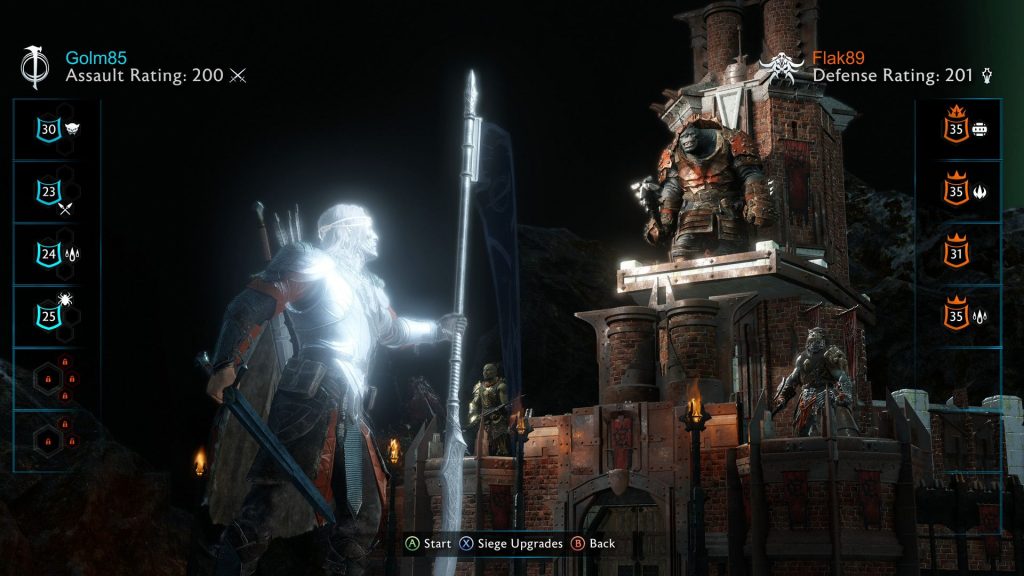 Graphically, Middle-Earth: Shadow of War is an iterative update to Shadow of Mordor. Shadow of War retains the realistic style of the previous game. Since Shadow of War encompasses more territory, the game has a chance to showcase a larger variety of environments. Along with the change of scenery comes the different orc clans, each with their own style of dress. The orcs aren’t the only one with an equipment makeover. The introduction of the more traditional equipment system will change Talion’s look in-game. There are some gorgeous pieces in the game, but it’s a shame that Talion will magically switch to his default equipment during cut scenes. Much like the rest of the game, Shadow of War’s art style is a continuation of Shadow of Mordor with positive changes across the board. 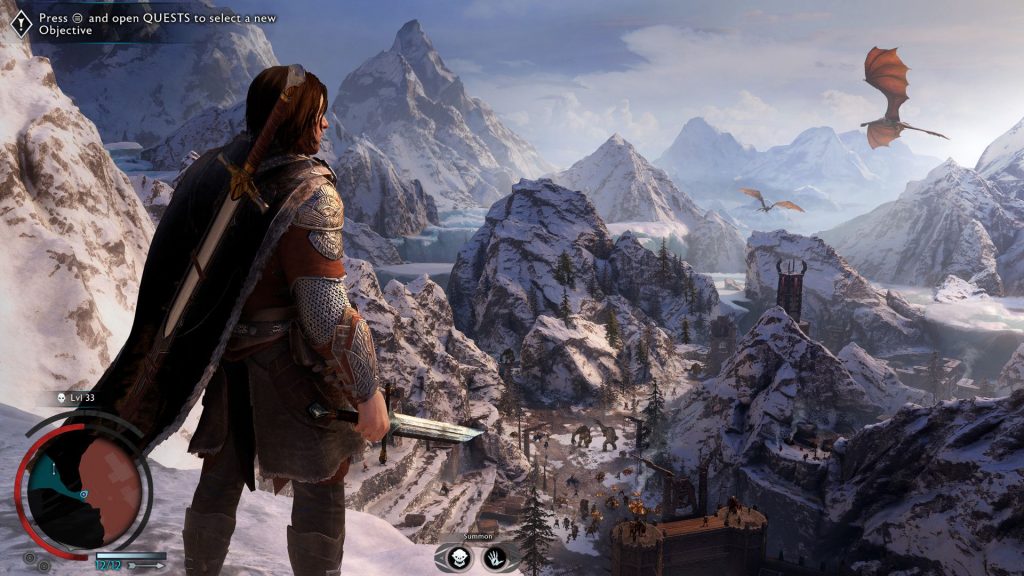 The audio experience in Middle-Earth: Shadow of War is superb. The voice acting is excellent, as expected from an AAA title. I am impressed with the consistency of the quality. There are a lot of orc captains in the game with their own lines, and they all are voiced by talented actors. The sound effects are spot on. The game’s soundtrack is fantastic. Shadow of Mordor left big shoes to fill for the sequel. Composer Garry Schyman and Nathan Grigg returned to compose the latest title, and the pair do a fantastic job scoring the game. The soundtrack is subtle enough to pair well with stealthy moments, yet is able to pivot quickly and evoke the same sort of epic feeling that made The Lord of the Rings movie scores so memorable. The movies and Shadow of Mordor left a high bar for later additions to Tolkien’s franchise, and Shadow of War rises to the challenge do deliver an excellent audio experience. 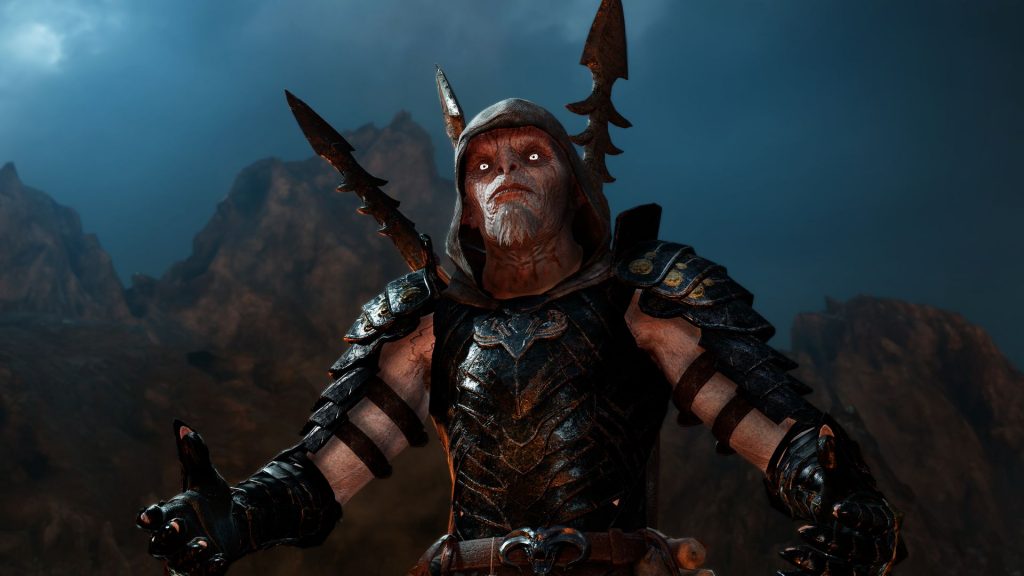 Middle-Earth: Shadow of War is a worthy sequel to Shadow of Mordor. While the game is not a ground-breaking title like its predecessor, Shadow of War feels like a tightly executed evolution. The improvements to the Nemesis system is excellent and the combat is fantastic. The audio/visual experience is really a modernized version of Shadow of Mordor, which is not a bad thing at all. The decision to include microtransactions in a single player game is understandably contentious. Whether microtransactions in a single player, AAA title is a good or bad thing can be debated until the end of time. While Shadow of War’s implementation of microtransaction isn’t perfect, it is one of the better examples. Unless you have serious issues with the game on principle, Middle-Earth: Shadow of War is a solid open-world title that deserves to be in every gamer’s library.

Middle-Earth: Shadow of War is the sequel Shadow of Mordor deserves.
8.5