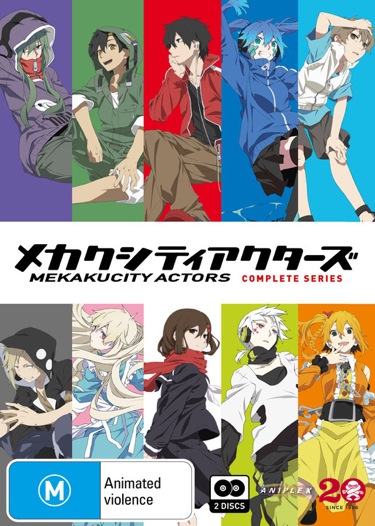 Shintaro Kisaragi is a NEET who is forced to go outside into the real world for the first time in two years. He is taken hostage during a terrorist attack, along with a few unusual people. He teams up with a strangely unaffected person and escapes, later learning that the strange person is a member of the ‘Blindfold Organisation’. The Organisation’s members all received mysterious powers after incidents that all occurred on August 15.

Mekakucity Actors starts out being really confusing. The opening shots of the first episode make no sense in relation to the first several episodes. It takes an unusual amount of concentration to be able to focus on the plot and process all of the complex explanations that are given. Using outer narration is an unusual way to begin an anime series, but under Akiyuki Shinbo’s direction, Shaft’s adaptation frames everything in such a way that produces a sense of intrigue. The technique of withholding key information to build suspense is used throughout the series. Unfortunately, it will be several episodes before the outer narration starts making sense. 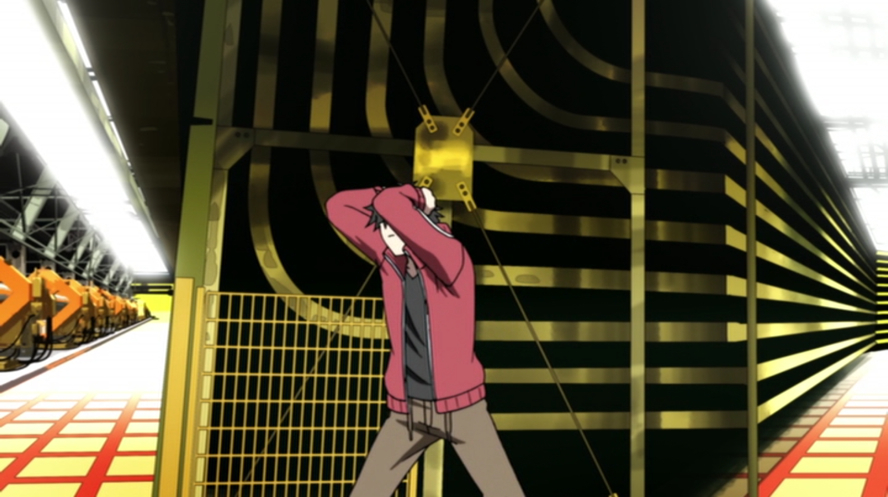 The tone of the series shifts after the first scene. The next part of the first episode plays out as a slice-of-life series about a NEET (Not in Employment, Education or Training) named Shintaro. While this episode suffers from poorly-written dialogue and a lack of originality, especially when it comes to the pop culture references and otaku-related jokes, it rarely has any moments that are not interesting in some way. We are introduced to a virtual girl named Ene, but not even Shintaro has any idea where she came from, or more importantly, who designed her. The tone shifts once again as Shintaro is caught up in a terrorist attack at a department store and taken hostage. He meets a strange person who seems to have some kind of psychic ability, and it is at this point that the action begins. We see everything from Shintaro’s perspective in this episode, and the lack of visual information to support the events that are occurring helps to increase the sense of mystery and intrigue. Everything from the pacing to the visuals and the soundstage result in this being an unexpectedly good introduction to the series, although only after it starts making any real sense.

The second episode features another significant shift in tone. It is now a slice-of-life series about a seemingly air-headed student named Momo Kisaragi. This episode is slow, and where the pacing problems begin. The first seven minutes wasted on the depiction of a girl who has extremely poor grades. These seven minutes also contain the introduction of a teacher named Tateyama, although his name is only mentioned in the English subtitles and not in the actual dialogue. There is something very wrong with this teacher; he comes across as creepy, and the portrayal of his character gets worse until we start getting answers to the questions raised about him. He can be forgotten for a while after this point, but his appearance as a teacher should be remembered while watching the second half of the show. The next few minutes of this episode utilise powerful imagery to depict the level of isolation and loneliness that Momo feels. This is the point at which this episode finally takes off. The mystery and intrigue only increase as the episode ends with Momo being chased by hordes of apparent fans of her idol work. This series goes backwards and forwards in its timeline several times, something that has the unfortunate side effect of making this entire episode seem pointless until watching episode three. Changing the tone of a series so significantly even once is unusual, but it does make watching the show an interesting ride if nothing else. 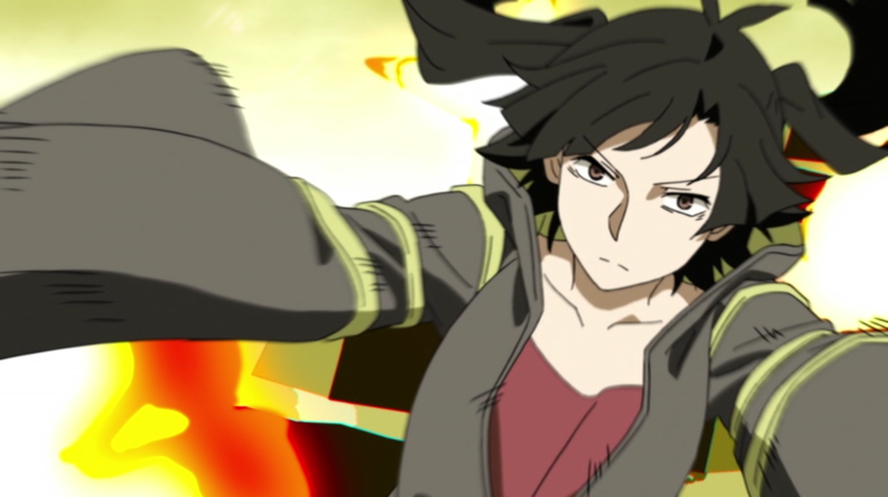 The third episode finally introduces the other main characters, those being the members of the Blindfold Gang (Mekakushi Dan). We learn that its members have powers involving their eyes, including Momo Kisaragi. It is also revealed that the events of the second episode occur more-or-less simultaneously with the events of episode one, and the truth of the events of the terrorist attack is finally explained. It comes across as clever and almost, but not quite, lacks the stupidity that bogs down other anime series. As the plot progresses, new characters are introduced from the past and the present. One or two episodes at a time are used to explore these characters. The relevancy of these episodes is initially unclear, but the pieces of the puzzle begin falling into place following the extremely disturbing episode seven. This episode portrays Tateyama in a particularly creepy way. Two students, Haruka and Takane, are in Tateyama’s ‘special needs’ class for students who have serious medical conditions. Takane suddenly collapses and dies in a school corridor, which itself raises an unanswered question: what condition does she have that could cause her to suddenly die? Tateyama mysteriously appears at this very moment with an unsettling smile on his face and also appears on Haruka’s deathbed with the same, disturbing smile. The implication is that he murdered them, possibly with poison, although this is left unexplained. An extremely disturbing scene follows later on, showing Takane’s body disappearing as if she were a piece of data in a matrix and then materialising as an electronic being. Characters that die on August the 15th can apparently be given a second chance, like Takane, although the hunt for the people who do not return is slowly relegated to the background and ultimately forgotten. 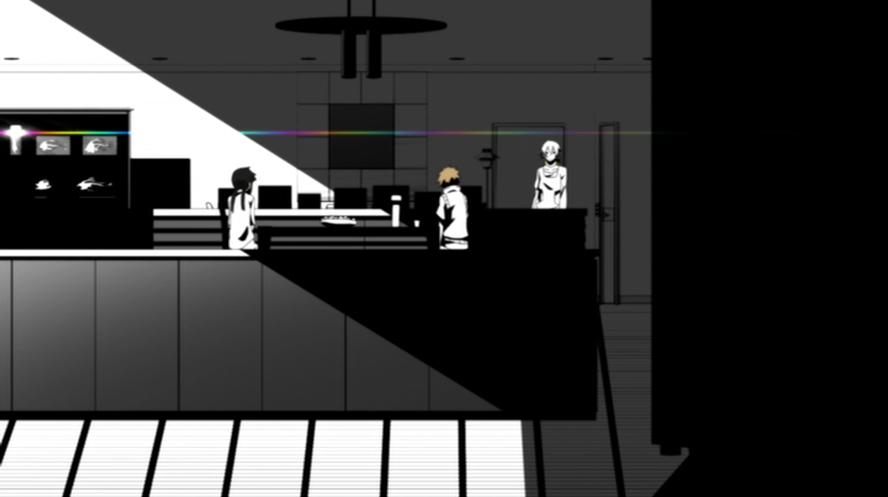 It is eventually revealed where the eye powers came from and why Tateyama acts the way he does. They can be confusing, however, and there are some questions that do not seem to be answered at any point. The pacing becomes a serious problem as the series reaches its conclusion. Things start to move very quickly, apparently leaving no time for answers in multiple cases. The climax make sense to a certain extent, but no attempt is made to explain how certain things are possible in this world. The ending falls flat and ends up coming across as a giant mess created out of the fusion of genuine drama and melodrama. The very end of the episode is wasted too. We are simply shown the backgrounds of the settings used throughout the series, without dialogue. This is time that should have been spent resolving unanswered questions instead of being sentimental.

One impressive component of this series is Shaft’s animation. The use of contrasting colours is one of the most striking elements of this anime, helping to add to the very surreal feel that is present throughout every episode. Whites in particular stand out significantly, and primary colours are made to stand out in the surreal and downright bizarre dream sequences that occur in certain episodes. This is an unusually bright series, visually speaking, but Shaft’s animation team is also able to evoke a sense of darkness when necessary. The original creator may have taken inspiration from gothic literature, and the simple use of a flash of lightning is used remarkably well to create a feeling of unease. The other major element of the animation that stands out is the way the characters tilt their heads when looking back at someone, an interesting but effective animation technique. Prospective buyers should note that the subtitles cannot be turned off on these discs. The opening song and ending song are not subtitled. 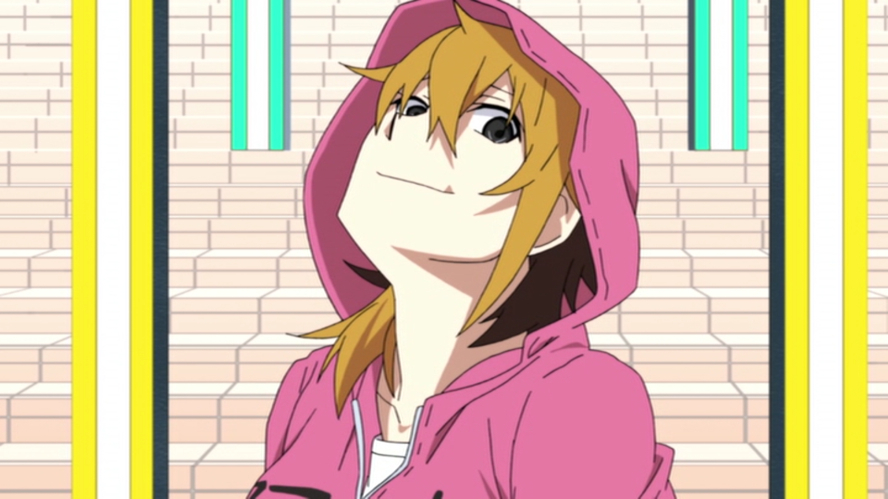 One of the many components of this adaptation that stands out is the sound direction. The voice acting is top notch, the background music is varied in style and expertly composed for the different types of situations that occur and the use of sound effects to enhance the atmosphere is particularly effective. The sound is not just a supplement to each scene, it is an integral part of the viewing experience. The opening song is great and there are many great character songs featured throughout the series. Instead of playing in the background like insert songs usually do in anime, these songs come to the forefront and tell the story and feelings of the characters. The sound direction, the voice direction and the use of volume for various effects are all excellent.

This series starts out confusing, but more and more plot details are revealed that make it more engaging. It is intriguing, but understanding everything would likely be much easier during a second viewing. The animation, the audio and Shinbo’s direction combine to make what could have been a terrible series stand out in many ways. It is either purposely or accidentally inspired by the gothic tradition, but it is very surreal either way. For people who enjoy fantasy series and/or series about people with superpowers, Mekakucity Actors is a unique series that is worth watching whether or not you have ever heard of the Kagerou Project.
Capsule Computers review guidelines can be found here.

Author’s note: The initial score attached to this review was inaccurate due to a typing error and has been updated by the author.