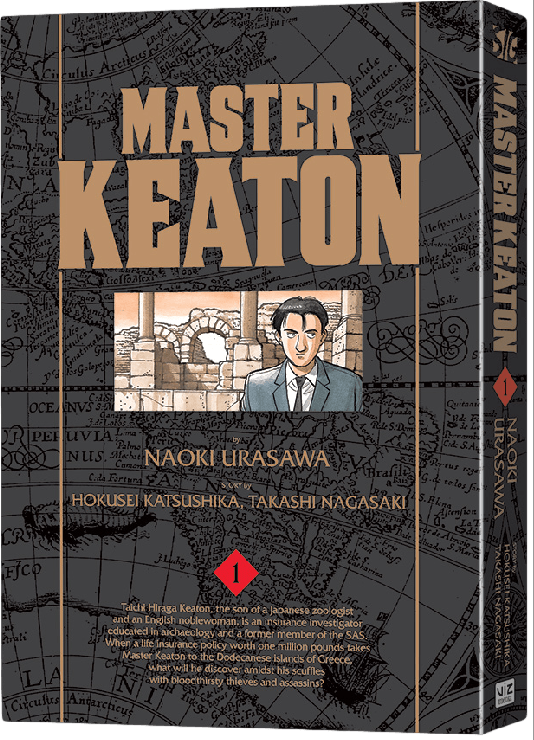 Overview
Naoki Urasawa has created a number of award winning manga series such as Monster and 20th Century Boys, but he has also spent time working on another series that is just as well known and that happens to be Master Keaton. While disputes and controversy exist on who wrote parts of Master Keaton, as Urasawa started to claim that he wrote some of the story after a dispute with the original author caused him to take over the story and the artwork, but it is clear that his influence is still shown through the artwork in these early chapters.

Anyways, now that Master Keaton is in English for the first time since the series’ original run from 1988 to 1994, is this first volume worth picking up?

Story
Taichi Hiraga Keaton is the son of a Japanese zoologist and a British noblewoman and although he may spend some of his time in Japan as an Archeology lecturer in a Japanese university, he is a man with many occupations. What Keaton usually does is work as an insurance investigator for Lloyd’s of London as well as attempt to help those he comes across when they are in trouble. Keaton’s low-profile personality that leads his students to take advantage of his laid-back attitude and causes issues with his now divorced wife and teenage daughter may be who he is on the surface, but below that surface Keaton is a man of incredible skill.

While few details have been revealed in Volume 1, Keaton is not only highly intelligent, with time spent at Oxford, but also skilled in combat and tactics thanks to his time enlisted in the British Army’s Special Air Service. Thanks to this particular set of skills, Keaton is capable of not only coming up with historically accurate facts on the fly but also surviving dangerous encounters with make-shift weaponry and handling impossible odds by using ingenious survival techniques.

It is worth noting that all of the stories contained in Master Keaton Volume 1 are one-off stories that usually end at the conclusion of that chapter. Keaton can go from investigating the suspicious death of a man with a life insurance policy of one million pounds to attempting to surviving in a desert after being left for dead by locals due to the ineptitude of an excavation crew and then shifting to helping a strange surly old woman with a mystery that he only had just met. There are a few slight hints about certain events that may appear in another chapter and Keaton’s also divorced father and daughter regularly appear throughout this volume as we learn about the divorce from his wife though this is only barely explored. This lack of a consistent story is disappointing, especially since (despite how wordy many descriptions tend to be) many of the stories are wrapped up in a rushed manner with very little extra explanation or long lasting development.

The lack of continuity appears to hurt the series even worse when you compare the one-off chapters to the two storylines in Master Keaton Volume 1 that last for more than a single chapter. While the simple stories tend to be well told and interesting enough on their own, these stories that span two or three chapters give readers plenty of extra information not only about Keaton’s past but also some insight into the people he is trying to track down or foil the plans of.

As mentioned, Master Keaton is a bit of a slow read thanks to the descriptive nature of the series and when you combine that with the slow start of volume 1 and the episodic stories you have a story that isn’t exactly for everyone. The stories that are told are still interesting in their own right and seeing how Keaton will manage to survive or figure out the motives of certain characters makes for an enjoyable read, but one that is lacking in action since Keaton or other characters generally end fights instantly or any real development

Artwork
Although at this point Naoki Urasawa may not have been writing the storyline, he was handling the illustrations and throughout the volume viewers will be treated to his crisp detailed artwork. The way that he designs his characters makes even the standard looking Keaton stand out in surprising fashion, though this also is thanks to the way that every character has a distinct look about them and plenty of detail into their outfits and expressions.

Since the volume jumps from story to story and Keaton travels to numerous locations readers will be shown plenty of detailed areas ranging from cities in Japan, Greece, Italy, and more as well as desert ruins and various other sites that feature a number of extremely detailed backgrounds that really have a chance to shine in this larger Signature release. It is also worth noting that, to preserve the manga artwork, all of the sound effects have been left untranslated in this release but Viz has included a glossary in the back with these translations.

Extra Content
Viz has handled Master Keaton Volume 1 the same way they handled Naoki Urasawa’s Monster series, giving the volume a faux dust jacket as well as a handful of color pages at the start and the middle of the volume. These color pages are printed on the same material as normal pages and it is neat to see the color slowly diminish every page until the manga enters its standard black and white form.

Overall
Master Keaton Volume 1 is a manga series that may not be for the average reader thanks to the way it handles it stories, but those who do pick up this release will be in for a fascinating manga that is unlike most other series on the market. Keaton’s unique way of handling situations and seemingly endless pool of knowledge that helps him against even the shadiest members of society makes this a series worth reading for those who can overlook its current shortcomings.