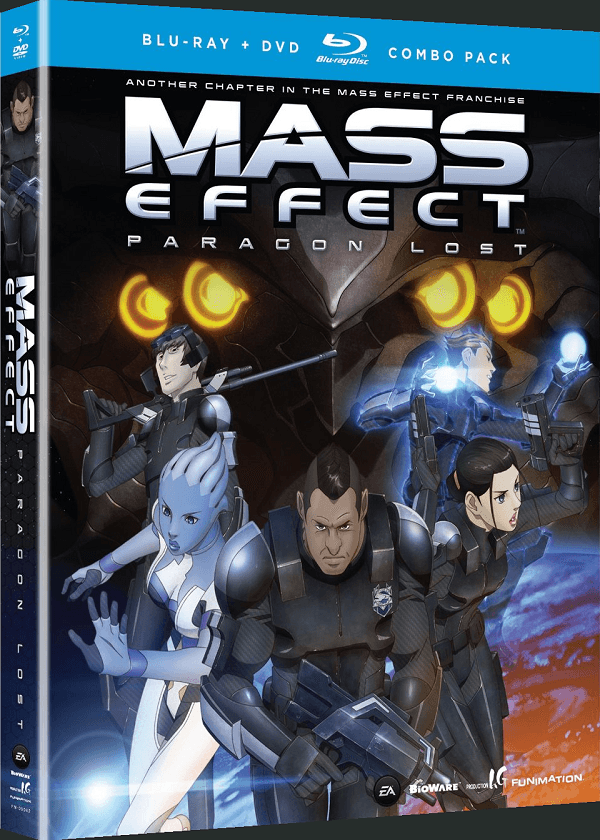 Overall:
The Mass Effect trilogy may have wrapped up over half a year ago at this point, the franchise lives on not only through novels and likely prequels/sequels. However one such continuation left quite a few fans surprised when they heard that a Mass Effect anime movie was in the works. Though delayed often, the Mass Effect: Paragon Lost movie has finally been released to stores and fans can once again return to the Terminus system for a new adventure. Should the adventure found in Paragon Lost be avoided or cherished? Let’s find out.

Story:
Let’s address the elephant in the room right off the bat. Anime viewers who do not have knowledge from the games may be lost at multiple points throughout the show as there are quite a few mentions to past events and characters which do not appear in Paragon Lost. That being said, the title can still be enjoyed at face value for these people, though they will miss out on many of the references made to Mass Effect 2 and connections to events in Mass Effect 3. 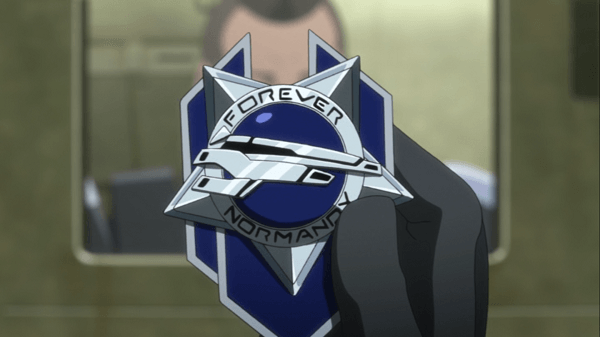 Now the events of Paragon Lost take place early on in the events of Mass Effect 2 where the galaxy believes that Commander Shepard perished at the hands of an unknown enemy many months ago. As such, the Alliance must make do on its own. When a group of Blood Pack mercenaries assault the human colony based on Fehl Prime, a younger James Vega is sent into the scene as a Squad Leader of a group of Special Force soldiers.

When Vega’s group of soldiers manages to be the only group to survive the deadly Krogan led Blood Pack, they are assigned to security detail to keep the colony from coming under attack once again. After spending two years of peace and quiet however, a strange artifact is discovered a short distance away from the colony which seems to be causing issues with their communications. As such, Vega, his soldiers and an Asari researcher are sent to investigate the artifact. 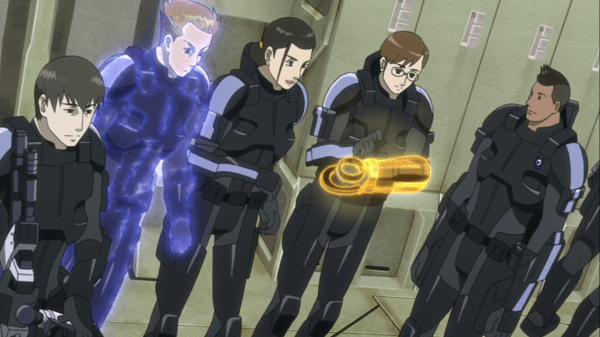 As the group investigates this strange artifact, a mysterious hostile ship begins to hover over the colony and unleashes a hoard of insects upon the human colonists, paralyzing them all for collection. This leaves Vega and the rest of the survivors with little hope as they fight against an unknown foe wielding powerful weapons they have never seen before. But when the lives of hundreds of people and perhaps the entire Alliance lies in the balance, Vega must step up to the plate like his hero Shepard and try to defeat these foes. 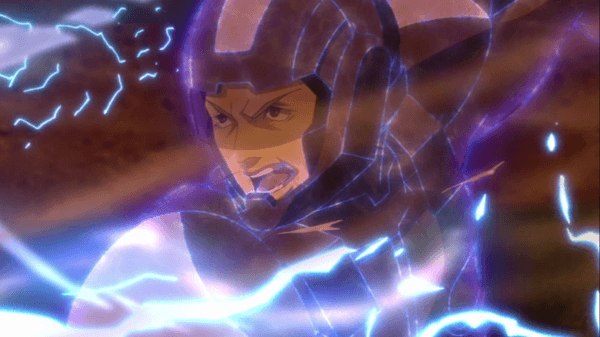 Considering the fact that Paragon Lost is an hour and a half movie, the writers only have a limited amount of time to work with but they actually managed to pull off a decent job. The story of Paragon Lost plays out similar to the way a drawn-out mission in the Mass Effect video game series would play out as Vega and the group fight against the Collectors, take a brief respite to collect themselves and gather information and then fight again all while Vega is forced to make difficult decisions.

As people played through Mass Effect 3, many people found the inclusion of a the new character James Vega to be the least interesting and noteworthy character of the bunch. However it is thanks to this fact that this movie actually manages to shine as viewers will likely see Vega in a whole new light once the final few minutes of Paragon Lost play out. 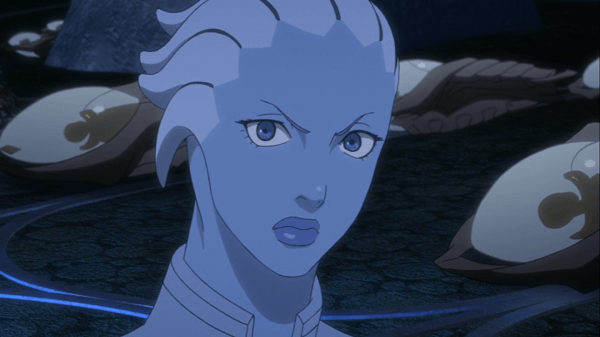 Ultimately Mass Effect: Paragon Lost’s story benefits greatly from some great character interaction between the surviving soldiers, the Asari researcher and Vega as well as a couple of interesting plot twists paired with plenty of well-executed firefights all culminating in a horrible decision that no person should ever have to make placed at the feet of Vega.

Visuals:
This time around, BioWare and Production I.G. have chosen to use anime styled visuals for the creation of this movie, unlike the 3D models used for the Dragon Age movie. As such, the title actually benefits greatly from the added level of detail the anime focus can provide. It is interesting to note though that some races can look a bit different than fans remember them, especially the Krogan, but overall most of the weapon designs and ship designs remain true to the source material while the Collector’s themselves appear as spitting-images of the ones that appear from within the game. 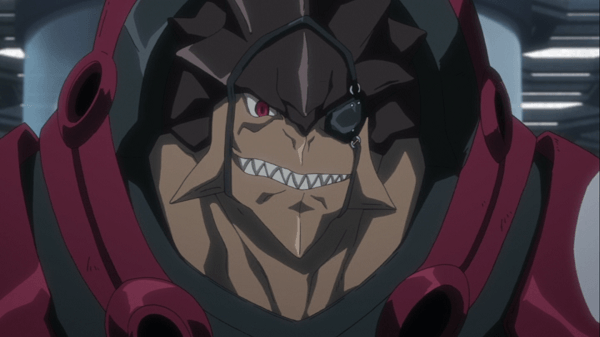 Vega’s appearance goes largely unchanged for this prequel movie, but he does seem a bit younger and smoother than he does in the game, though that says little considering the changes in style. Throughout the movie the animation quality remains consistently high and actually peaks during most combat sequences as the Biotic soldier’s powers are impressively animated.

Audio:
Those who are used to FUNimation’s anime releases may be expecting a Japanese dub of some kind included with Paragon Lost, however these people will be surprised to find that there is in fact no choice of voice track in this release. Instead the only audio option is the English dub which may upset some people, though it is worth noting that considering the Mass Effect franchise is focused almost entirely in the West, it may be for the best that such an audio track was not included. 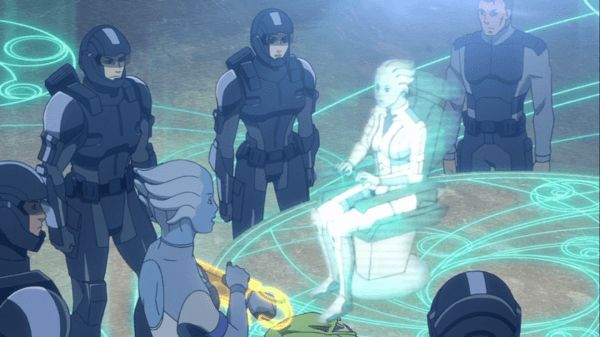 As far as the English voice work goes, it is interesting to note that Freddie Prinze Jr. provides the voice work for Vega as he did within Mass Effect 3 and he has managed to keep the character consistent throughout the show. The rest of the English cast does a well-enough job though unfortunately the English voice work is average at best with plenty of over-acting sequences throughout most action sequences. The sound effects and background music used throughout Paragon Lost are mildly impressive and can pack a decent amount of punch at times, especially inside combat sequences.

Extras:
As far as bonus features go, there is a decent offering of supplementary content here, though some of it is a little questionable as one bonus does not even focus on the franchise itself. That being said, viewers are provided a US trailer for the anime movie and previews for other FUNimation shows as well as three English video sections focusing around production and behind-the-scenes footage.

In “All Doors Open: A Look Inside Electronic Arts” viewers are treated to a behind-the-scenes look at various things from the EA offices, however all of the footage is focused around Dead Space 3, which is somewhat understandable thanks to that being the game they are developing at the moment. Also included is “An Inside Look at the Mass Effect Universe” which provides some developmental footage from the Mass Effect 3 video game. 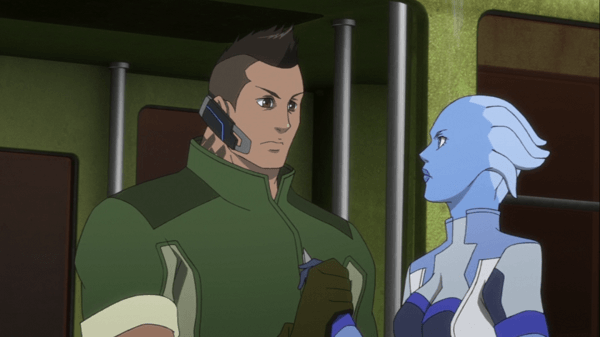 Finally the “Directing Effect” focuses almost entirely on the creation of Paragon Lost and actually expands beyond the US offices and into Production I.G. to learn about some of the anime aspects the show was given and how they worked with Bioware to try and create the best experience possible. This alone makes this bonus feature the most interesting compared to the other offerings as it does reveal some interesting tidbits of information fans may be interested in.

Overall:
Mass Effect: Paragon Lost was an addition to the Mass Effect lore that many may not have asked for, however anyone who does give the title a chance will be in for a nice treat with an emotional story and great action. The weakest character of Mass Effect 3 gets his chance to shine as James Vega’s experiences on Phel Prime expand his character immensely and show what struggles he had to go through before meeting his hero Shepard. Despite the English dub being rather sub-standard, the impressive visuals and intense battle sequences help usher in a surprisingly enjoyable movie held back by a number of flaws.