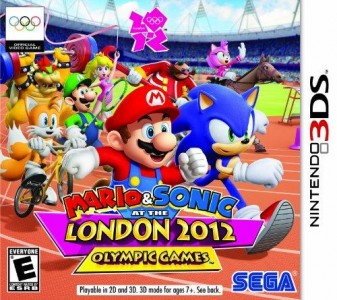 Overview
If you were to mention 15 years ago that Mario and Sonic would have collaborated in any video game, most would have fell over in shock at the thought. Times are different now though, the SNES and Genesis wars are over, and Mario & Sonic at the London Olympic Games marks the third entry in Sega’s growing franchise that sees the two now legends going for gold. Just a few months after releasing a console version, this portable offering is set to bring together two all-star teams for some mini-game madness at the world’s grand stage for sporting events. Being on the 3DS, does this entry shoot for the stars, or is it bound by the limitations of it’s platform? Here is my review for Mario & Sonic at the London Olympic Games. 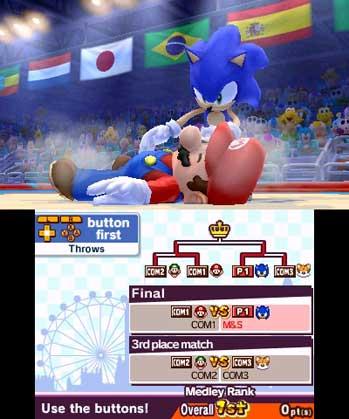 Story
Believe it or not, there is a full story to be told in the London Olympic Games. Eggman and Bowser have set out to do the unthinkable. After years of kidnapping princesses, holding small animals hostage, and opening corrupt amusement parks, it’s now this duo’s duty to make the Olympics…foggy. Sonic, Mario, and the rest of the bunch are not going to stand by and watch the dark auras take over though, and are out to clear the air and restore these events to their bright and jolly state.

Yes, it’s not the most intriguing of stories, but for a franchise that has made a name for itself out of sheer simplicity and star power, you can’t really ask for too much more. Cutscenes in-between games tell the small plot rather well and with two branching paths, players can see everything unfold in two perspectives (Mario and Sonic’s, of course). Instead of jumping or spindashing through foes, these two gaming icons must compete against whatever evil lies ahead, and in true fare for both parties involved, there are plenty of nods and fan service to keep the player interested until the final event. 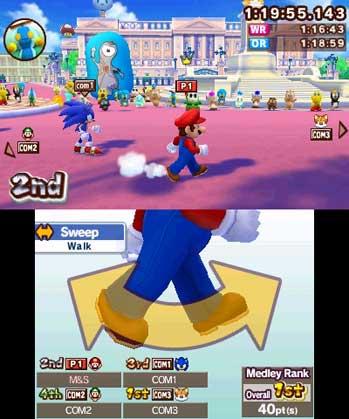 Gameplay
If Mario and Sonic have anything going for them in this outing, it’s the hefty variety of mechanics that are involved when it comes to makes these mini-games tick. Whether it be biking, weight-lifting, swimming, or any other Olympic-flavored fare, Sega have done a fantastic job in bringing out the full potential of the 3DS’ touch screen, mic, gyroscopic and button controls by putting them all to use at one time or another, giving each sport it’s own unique feel. While that alone is worthy of a ton of praise, there are still some shortcomings within the game due to poor choices in execution.

Mario & Sonic at the London Olympic Games featured around 20 mini-games in all, and while each felt…”mini”, they never came off as bite-sized and were equally enjoyable to some extent. The 3DS counterpart is quite different though, letting the player have a vast selection of over 50. This sounds great at first, but quite a few of these romps lack the quality of others and stick out like rotten apples amongst the stronger contenders within the game. For instance, there is one game that lets players blow at the 3DS’ mic to control a sailboat. This works just fine and the vessel moves accordingly, but the whole event is over in a blink of an eye and feels lackluster as a result. Another mic-based event has you yell into the mic to control your character’s performance, which is about as awkward as you can imagine. These are just a couple of examples of course, but thankfully Sega did craft out some more memorable inclusions in this lot that are sure to please. 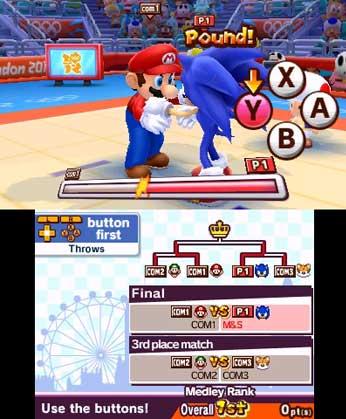 Out of all the events present, I found the timing-based games and button-mashing races to be the most enjoyable. Taekwondo has the player hit an appropriate input at the correct time to slam their opponent into the ground. Whoever has the fastest and most accurate fingers become the victor, and it’s hard not to want to try again in either case. Since this is the Olympics, racing and swimming can both be done by mashing a few buttons and controlling your character’s speed, and this is yet another fine event that works well with the game’s limited scope. You see, nearly every mini-game takes less than a minute to complete and every sport has been shrunken down to fit within the small time span, while boasting some kind of gimmick to make things more interesting. Sadly, what should be the most exciting sports on the cart are also the most disappointing. Instead of getting to play volleyball in a full court and actually taking control of your character, the player is forced to control what feels like a statue as they wait for the ball to come to them, using the stylus strokes to knock it in a particular direction. Many other big-named sports work in the same manner, limiting the player to a couple of button-presses instead of a more fulfilling control scheme. 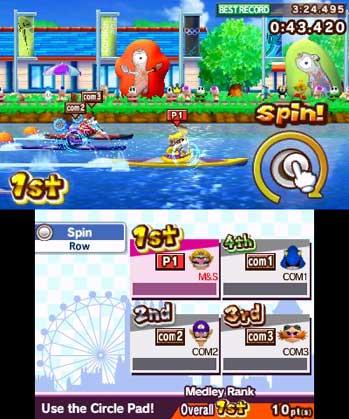 The saving grace to it all though is how these casual tasks are tied together. Single player mode lets players pick their own events to play, with the option to create a “medley” of events to be played one after another, which is great for those who would rather player their favorites than go through the offerings found in Story mode. Winning medals and “going for gold” is also a good reason to keep going back in for more, and there is hours of content to be found for any completionist looking for a challenge. For those with friends, a multiplayer mode can also be found where you can square off against friends, competing in several events locally.

Visuals/Audio
Graphically, Mario and Sonic at the London Olympic Games looks fantastic. Each model for Sonic, Tails, Mario, Luigi, or any of the many other characters from either franchise look crisp and delightful, easily standing toe to toe with their console forms. The 3D effect however is rather subtle and feels a bit tacked on, and of course can not be properly used with the gyroscopic themed games to the movement of the handheld. Animations are also well done, with each character capturing their quirky charms with expressions alone in the colorful and appropriately themed London environment.

As far as a soundtrack goes, you should expect a bit of Mushroom Kingdom, a dash of Sonic, and a few generic yet upbeat tracks blaring in the background as players compete. None of these tunes are too distinguishable or stand on their own, but are just effective enough in giving the game a warm and inviting feeling to fans who are both old and new to this franchise. Voice acting is very sparse and is mainly done through grunts and whines, which is a bit of a let-down considering that we have seen other 3DS titles go out of their way to offer rich dialogue sequences.

Overall
When it boils down to it, my only true complaint with Mario & Sonic at the London Olympic Games is that it’s just a mini-game compilation. Nothing more, nothing less. Events have been shrunken down to best fit the platform, but the 3DS has proven itself capable of much more in the past which leaves a lot to be desired from this portable entry. Mario and Sonic are still very much Mario and Sonic though, and their personas alone are enough to make younger and more casual gamers cling to this title and get hours of enjoyment out of the huge variety of events in tow. Mario however…could never, and I do repeat never beat Sonic in a race. That is just craziness.