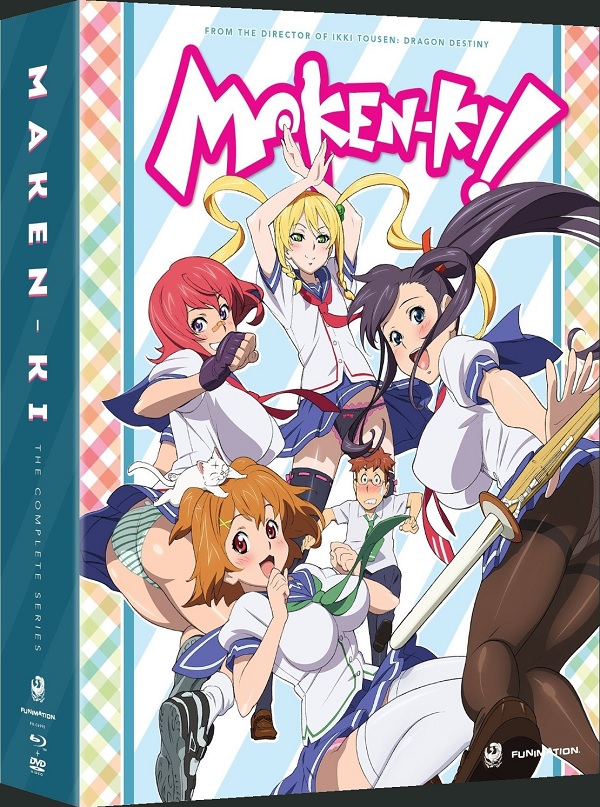 Overview
Over the last few years, Japan started to censor many of the fan-service anime on the market. This is primarily done in an effort to help drive up the Blu-ray sales for specific series since the home release features the uncensored version of the anime. One of the many anime that underwent severe censorship was Maken-Ki! which suffered from so much blatant censorship many viewers quickly were turned off of the show. Now that FUNimation has brought Maken-Ki! over to North America in its uncensored, boob and panty filled glory, is it worth picking up?

Story
Tenri Academy has recently gone co-ed and this is great news for a teenager named Takeru as he now has a chance to attend a school where he can live on-campus and also spend time with his childhood friend. It also just so happens that Takeru is quite perverted and since this recent all-girls school now is accepting boys, it seems like the best chance to surround himself in girls after being relegated to an all-boys school for many years. 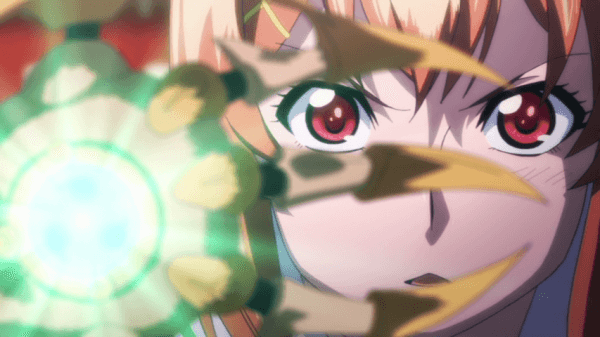 However Takeru probably should have done a little bit more research before joining Tenri Academy because it is unlike any other school in the nation as all of the students possess unique abilities and elements that allow them to control ‘Maken’ which are powerful weapons special to each student who attends the school.

Takeru’s paradise may be slipping away from his hands, but it quickly falls right back into his lap as not only does his attractive childhood friend Haruko stand up for him, Inaho, a very affectionate and incredibly strong girl claiming to be his fiancé has appeared to protect him. To top it all off, Himegami, a twintail loli that possesses unique abilities also has taken interest in a mysterious power that Takeru seems to possess, resulting in Takeru living with three attractive girls right at the end of the first episode. 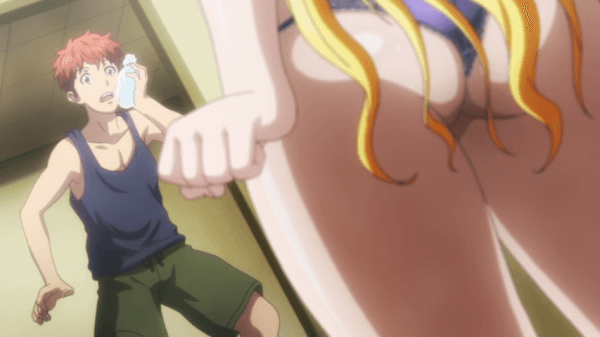 While many harem shows spend the first half of the series working on introducing each of the girls that are part of the main character’s harem, Maken-Ki! manages to introduce nearly all of the main girls in the very first episode of the series. While this leaves the series with plenty of time to work on plot and character development, very little time is spent on either of these things.

Sure, there are elements of story that are hinted at and slowly developed over time, such as the mystery behind Takeru’s powers and how his Maken makes him unique as well as the Venus group that appears at the latter half of the series. Even Himegami’s interest in Takeru and her own secrets start to be revealed but sadly this is left by the wayside due to poor pacing. 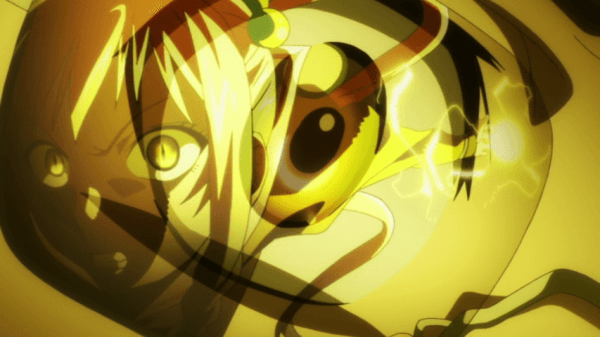 There are also hints of character development as we learn a bit about Inaho’s promise with Takeru, even though the latter cannot remember it, and hints about Takeru’s past that drives him to protect women in battle are also given. Sadly except for a very minor story arc that covers the last two episodes of the season, Maken-Ki! is all build-up with no pay off at the end.

Of course for what it lacks in story, Maken-Ki! makes up with fists, breasts, a likable female cast, and a halfway decent harem lead. Takeru may be a rather perverted guy who happens to have numerous women falling all over him, but he holds true to his values when it comes to fighting against others and protecting the women around him. This leads to a number of standout moments where Takeru breaks out of his weak stereotype and gives him purpose in the series besides gathering a following of girls. 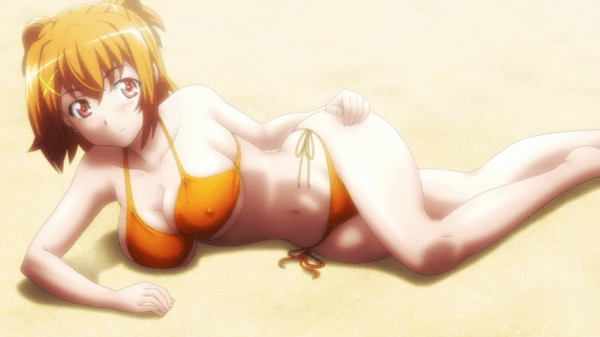 As for the fights and fan-service, Maken-Ki! is the type of series where you have to know what you are getting into by the time you pick it up. The action is fast-paced and almost anytime damage is dealt, clothing is ripped off and the pacing favors numerous swimsuit scenes and flat out nudity. While fan-service is great for a series like this, there comes a point in time where it is time to place the cheesecake to the side and focus on the meat of the story.

Visuals
You have to hand it to the animator’s behind Maken-Ki!, they knew exactly what they were getting into with this series and managed to provide some top of the line animation. The bright and varied color palette combined with plenty of flashy effects and nicely designed weaponry make every fight sequence in Maken-Ki! amazing looking. 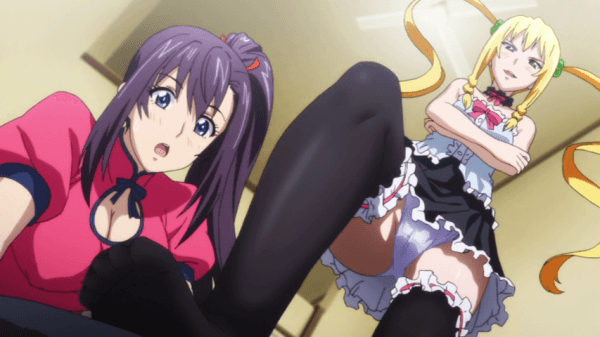 They also knew what they were doing when it came to fan-service. There is a wide-range of girls in Maken-Ki! and while a number of them fall into stereotypical appearances, they are all nicely designed and detailed. The fan-service is quite high in this series as I don’t believe there was a single episode without nipples being shown and numerous times in any episode some highly detailed panty shots were presented to the viewer, ensuring the series delivers on what fans of the genre are looking for.

Audio
With the release of Maken-Ki! FUNimation has provided both the original Japanese voice track as well as their newly produced English dub. The English voice cast does a nice job handling the characters, and Takeru, voiced by Ian Sinclair, actually comes off as a better character than his Japanese counterpart thanks to Ian’s voice work. 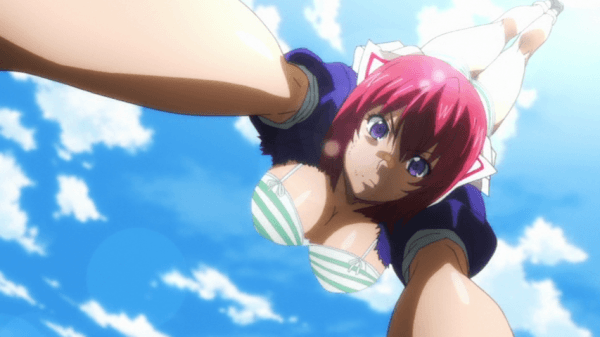 The background music is rather standard for a series such as this, meaning it tends to be rather forgetful even during fight scenes. As for the opening theme, we have “Fly Away” by Mizuki Togashi which works well as an opener for a series such as Maken-Ki! and the ending theme is “Baby! Baby!” which actually changes every single episode. You see, while the lyrics and animation stays the same, each episode features different members of the female Japanese voice actors performing the song.

Extras
As far as bonus features go, it is worth mentioning right off the bat that Maken-Ki! comes with a third disc that is dedicated to special features. Among these special features include two episode commentaries, trailers for this series as well as other FUNimation anime, textless versions of the opening and all of the ending themes, and original Japanese commercials. 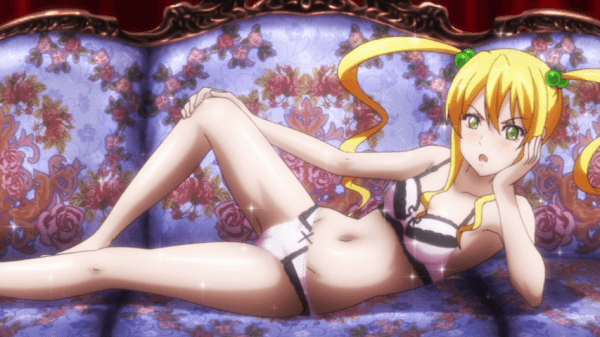 Also accompanying this release is an OVA episode, which is counted as episode 13 of this release. The episode focuses on training Takeru a bit but also provides a hefty dose of swimsuit fan-service. The first commentary track is for episode 2 and it features Scott Freeman, who voices Kengo, and Ian Sinclair, the voice of Takeru. The two discuss the many lewd scenes in Maken-Ki! and even mention the heavy censorship of the Japanese release. They also read off fake ‘love letters’ from the female voice acting cast for the series. Episode 8’s commentary features Monica Rial, the voice of Haruko and Tia Ballard, the voice of Inaho, and these two also continue the fake love letter bit from the previous commentary. 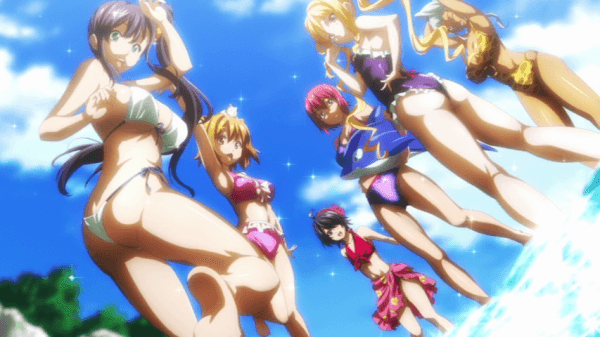 Finally, closing out the special features of Maken-Ki! are the “Heart-Throb Maken-Ki! Secret Training” bonuses. These are six ‘exercise’ videos which include six of the animated girls from the series as they perform workout routines for the viewer’s pleasure. The reason I say ‘exercise’ is because these videos are mostly meant to put the girls in very lewd poses and often have them wear various outfits briefly shown in the series, providing that last push into boob heaven.

Overall
There is a certain point in time where an anime fan has to know what they are getting themselves into when they pick up a certain series and in the case of Maken-Ki! it just so happens to be a harem anime with fan-service overload. By focusing so heavily on providing fan-service, the anime suffers from poor pacing and poor story progression but it makes up for it with an enjoyable cast of characters that receive some minor character development, hints to potential plot points in the next season, and satisfying animation to accompany the over-the-top fan-service.