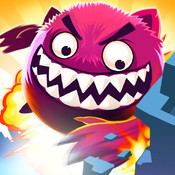 Everybody at some point in their lives wants to feel like The Incredible Hulk. Or Godzilla. Or that weird-elbow-fish-thingy from Cloverfield. Or for of you older folk – some character from Midway’s 1986 arcade game Rampage. Basically what I’m trying to say is that it’s fun to destroy stuff and feel like a total badass monster. Surprisingly, this is a theme we don’t see often in video games these days. Sure zombies are the latest craze and mowing down a million of them with a machine gun is all in good fun, but personally blowing up a building with your hands and taking on an entire army can’t be beat. So I’ll admit from the get-go I had a soft spot for Chillingo‘s latest release, Madmonster. From CG Matic, the creators of Madcoaster comes Madmonster, which takes a unique approach to this mayhem and has a couple surprises thrown in. It may not be what you expect at first glance, but it still captures the feeling you want to get from a game like this – meaningless, senseless, mindless, enjoyable destruction. 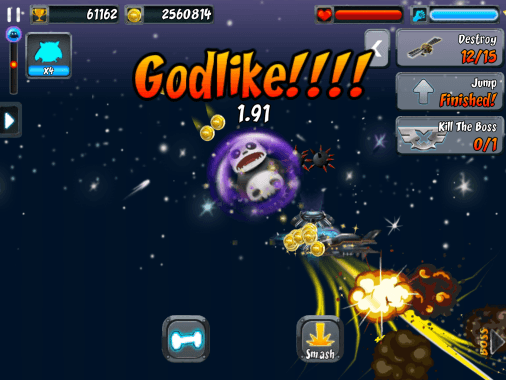 Madmonster has a very Sega Megadrive/Super Nintendo feel to it’s gameplay that is a little hard to describe. It’s kind of Metal Slug-ish, but it isn’t. It’s kind of Jetpack Joyride-ish, but it isn’t. All in all it’s just a solid arcade experience. Players take control of a monster and can move left and right and that’s pretty much it. By walking into an opponent their monster will jump off the military solider or vehicle and rise higher into the sky. From here players are encouraged to find another building or vehicle to jump off again, thus creating a combo for extra points and also ascending higher. Along the way power ups, coins and other collectables are there for the taking as well. Each level the player is given three objectives, a health meter, a skill meter and usually a time limit as well. Players must reach these objectives which generally are “destroy this” or “collect this” without dying or running out of time to advance onwards. 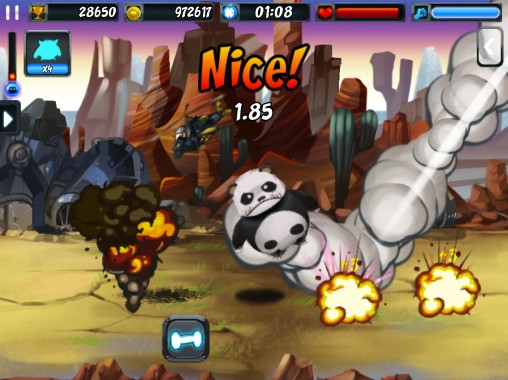 Maybe I’m personally an idiot, but since everything you touch makes you jump, I occasionally had trouble knowing what is safe to jump off and what is going to hurt me. Also as most things to jump off are usually jets in motion, it’s quite random platform locations to ascend from and can occasionally be frustrating to get to where you want to be. Once a level is completed, players can upgrade their monster or purchase a new monster, each with their own unique skills as well. However Madmonster doesn’t try anything too adventurous. Sure the concept is quite enjoyable, but it becomes very repetitive very quickly and upgrades don’t really make you feel as helpful as they should. Sure unlocking new Monsters is great but you need coins to do that and the prices are a tad higher than they probably should. Sure there are in-app purchases but I’m sure most gamers will want to avoid this. There are 60 levels of gameplay, but very little is done to mix things up and it can become quite stale over time. It should be noted there is also a time attack mode thrown in as well, so it’s nice to see some attempt at offering the player more variety. 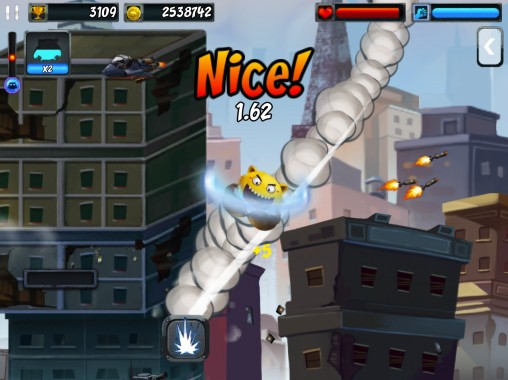 Like most titles published by Chillingo, Madmonster excelles in presentation. Graphics and character design are bright, crisp and family-friendly and the audio is superb. There are plenty of nice small-touches thrown in as well, such a a line signifying you’re record hight and more.The soundtrack has a slight retro feel to it which is fun and sound effects are spot on. In particular explosions are really captivating. There isn’t really much more to say really, other than CG Matic have done a great job at making this game look and sound as well it plays. 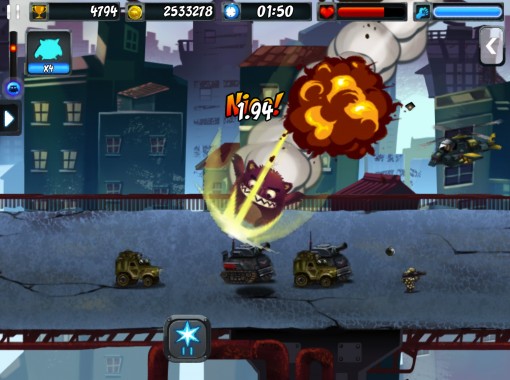 Madmonster may not keep you around for too long, but the ride is fun while it lasts. With excellent presentation and a fun concept Madmonster is a blast to play. However while there is plenty of options and levels on offer, the gameplay can get slightly repetitive over time. Regardless, Madmonster is still worth looking into for fans of arcade action…..and if that isn’t enough to convince you, you can play as a giant monstrous panda. How cool is that?!