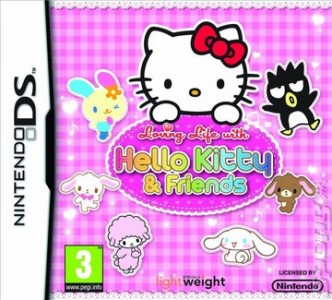 Hello Kitty is a brand that has built up into an iconic powerhouse over the last couple of decades, with merchandise ranging from school supplies to packaging. It has even had its own anime television show for young children. While it goes without saying that Hello Kitty invests most its time in appealing to young girls, this hasn’t stopped previous videogame outings on the Nintendo DS because with the console’s casual audience, there is obviously an audience of young schoolgirls for it.

In Loving Life with Hello Kitty and Friends you take on the role of Kitty and the whole gang’s in tow to join in on the fun: the rabbits of assorted colours, the pink sheep, the penguin and the floating fairy people. Before you’re wowed by even more of my encyclopaedic knowledge of the Hello Kitty characters, it is worth saying that I’m both too old and the opposite gender to the target audience of the game, which is why it’s worth me giving an outlook on the game from both perspectives. 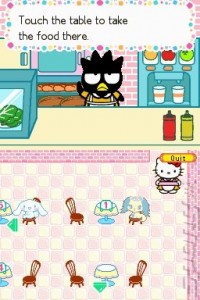 The game is broken down into five numbered tabs, with each one taking you to a slightly different area of the place where Kitty must call home. The first of which, obviously, is Kitty’s home, or more specifically, her room. Here you can fine-tune your outfit by changing you clothes and adding accessories like bags or necklaces, or even indulge in a spot of interior design by choosing the furnishings, carpet and wallpaper that suits you. Unfortunately, the options are quite limited and redecorating your room only allows you to select a new piece of furniture in place of an old one, not move it around and reorganise the layout of the room. The clothes are similarly limited as there are only a handful of different outfits which are then repeated in many alternative colours.

On the other hand, you can add to your wardrobe and your belongings with some retail therapy by visiting the fourth tab. Tab 4 is the ‘Let’s Go Shopping’ tab, which plays host to four shops: the Home Interior Shop, the Sanrio shop, the Picture Shop and the Clothing Shop. Each provides you with something to add to your room or your outfit, with home and fashion accessories available for purchase using the in-game currency of ‘Puros’. 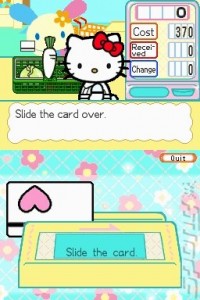 Which leads me on to tabs 3 and 4, the ‘Let’s Work’ sections of the game. The second tab is where a small market is located – it’s small in that there’s only three shops: a restaurant, a flower shop and a supermarket. Work elements of the game are the first part to introduce mini-games, with each one handled by some sort of mini-game. Some of these carry an accommodating time limit such as the flower shop mini-game in which you must select the right path while walking through a garden to find the correct flower, while others carry no time restrictions, like the supermarket game where you can freely scan items through the till and enter the necessary numbers to earn your Puros reward. In respect to the time limit, it has been well-designed to suit the typical player, a young and inexperienced gamer who will probably just be learning the ropes with this being one of their first games.

The other work tab sets you to work in the food court in the Hot Dog Shop, the Fresh Juice Shop, the Sandwich Shop, the Ice Cream Parlour and the Fast Food Restaurant. More mini-games ensue, with a mini-game for each stall, again accompanied by a monetary reward for passing the challenges. The final tab is the ‘Let’s All Play Together’ area, offering up an extra six mini-games (Tag, Concentration, Fly on a Broom, Catch the Right Ball, Let’s Dance, Ring Toss), taking the grand total up to 14. These mini-games vary in length, with some of the more recognisable games like Concentration, a match the symbols card game played against the AI, proving more enjoyable than some of the more obscure shorter games. For example, the Tag game was over in about 3 seconds flat due to the confined ball pit space the game takes place in meaning your friends end up running into you. 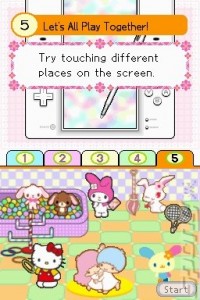 All the mini-games suffer from the same faults in that they don’t change. There is no increase in difficulty, meaning there’s little difference playing them a second time around aside from changes in combinations in the sequence-based games, which makes repeated plays tiresome and undesirable. The graphical style is clean – if ambitionless – with a series of static screens presented mainly using a colour palette of pinks, pale blues, white and yellow. The sound would have been passable if not for the squeaky screeching narrator who exclaims “Let’s Play…” every time you click on something, which likely even cause six-year-old girls to turn their volume down/off. It’s not a bad game for first timers due to a forgiving level of difficulty, but even the most inexperienced players will have seen everything it has to offer within two hours of play and would be hard-pressed to extract any more entertainment out of it beyond this point.