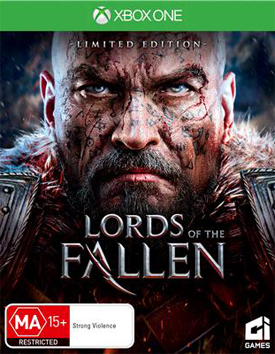 Lords of the Fallen is an action-RPG from the minds who brought us the Sniper: Ghost Warrior series. Many people, myself included were quick to dismiss the game as being nothing more than a Dark Souls clone but once you get really stuck into it they are really quite different. Although it is not without its flaws, breathtaking visuals, methodical gameplay and interesting take on the fantasy genre really make Lords of the Fallen stand out as a great game. 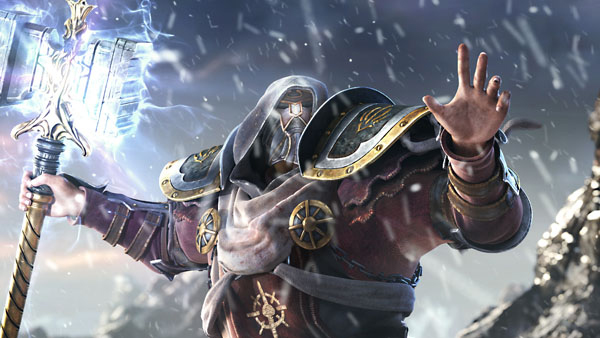 Set in a world where crime and sin are unforgivable, Lords of the Fallen puts us into the heavy armored shoes of Harkyn; a man who has committed so many atrocities that he was supposed to be locked away forever. However when an ancient terror returns to the world, the people decide that the only way to combat such evil is with an evil of their own. This is how Harkyn gets freed from his prison and set upon the land. As you travel you will save people from the demonic Rhogar, and fell a bunch of their lords in your quest to keep the world safe.

Like most traditional games, Lords of the Fallen’s narrative is told almost entirely through its pre-rendered cinematic cut scenes. However the lore of the game is left for the player to piece together – mostly from picking up scrolls and engaging with characters. I am a fan of games that require you to work for the backstory, and Lords of the Fallen does this quite well.

The world is well fleshed-out and the story is coherent. Forgoing the usual kind, caring hero in favor of a darker, more twisted protagonist is a great twist on the fantasy genre and one that we don’t often see. 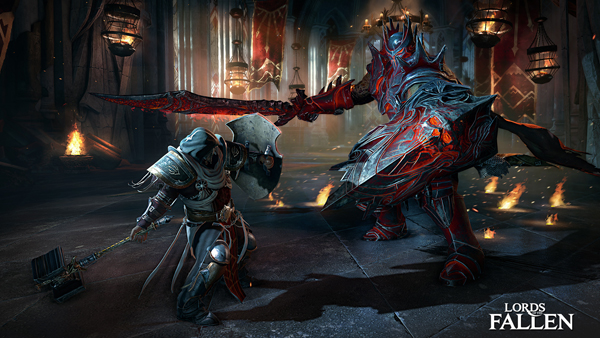 So let’s deal with the elephant in the room – yes this game plays a lot like the Souls franchise. Your controller layout is almost identical, as is the way in which you level yup your character, find loot and gain EXP. It is these similarities that make it easy to dismiss Lords of the Fallen as a Dark Souls clone, but that would not do justice to either game.

At its core, Lords of the Fallen is an action-RPG where you travel through the world slaying monsters and conquering giant lords. Since this is a game so heavily focused on its combat, it is great to see that CI Games managed to completely nail it. Those of you who are familiar with Dark Souls will immediately feel at home with the way the game plays – although in Lords of the Fallen, combat is a lot slower, more methodical and has a lot more weight. Many enemies will be armed with shields, and if you attack into their defense you are likely to not only do close to no damage, but will be left open to attack. 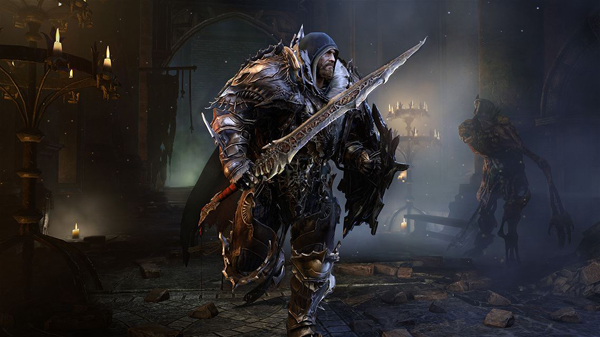 Harkyn is a bit of a bulky guy and even in his lightest armor moves quite slowly. This means that you are the player need to be mindful of when you attack, block and dodge so as to avoid being slammed by an enemy. This reliance on precision and timing really slows down the pace of the game but at the same time keeps you on your toes in every encounter. Each of the game’s weapons also handles differently so you will likely pick a favourite weapon and learn how it plays in order to keep on top of the game.

While the encounters rely on precision and patience, the game itself is not overly difficult. There is an element of trial and error to the game as you learn how enemies attack and how to best handle each situation, but all in all if you keep a cool head, you should not have to worry about dying all that much. 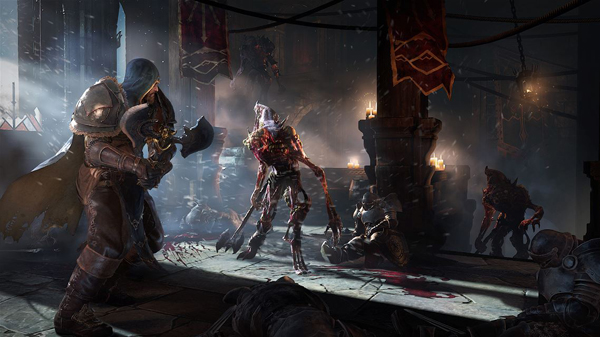 Lords of the Fallen implements an interesting take on the Dark Souls EXP system. Like Souls, you collect EXP by killing enemies and when you die you drop all of your currently collected EXP. However, there is a little bit of risk vs reward at play, as with enemy you kill your EXP multiplier will increase. This multiplier resets both when you die and when you use a checkpoint and level up. This creates an interesting dilemma with the player as you are wondering whether or not you will rest and recover or if you will just keep fighting on for more reward.

Lords of the Fallen has so many great gameplay elements, which is why it is such a shame that the game is rife with bugs. These aren’t just your run-of-the-mill visual bugs either (although there are more than a couple of those), but some that are directly related to the way you play the game and can be potentially game-breaking. More than once I found myself stuck behind a tiny rock or tree and was unable to move out. However the most common bug I found was related to combat – while circling an enemy, if you are in a small corridor the camera would freak out and move uncontrollably, leaving you unable to see what you are doing. Hopefully these kinds of problems will be patched out in the future but in the meantime they are a little more than annoying. 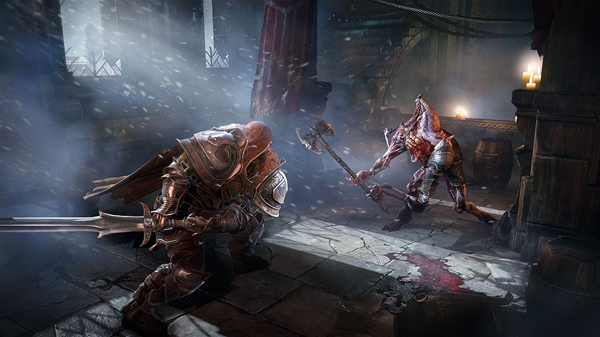 Lords of the Fallen may very well be the best looking game currently available. Everything from its character models, to the environments, and even the backgrounds all look amazing. Each area is varied, and pretty memorable. From desolate cathedrals to towering demonic structures everything looks great.

Enemy design is some of the best I have seen in the fantasy genre – with demons, warriors and monsters all looking grotesque and in some cases downright horrifying. Although you will face the same enemies time and time again through your journey, there are always new little details to see if you ever get a moment. 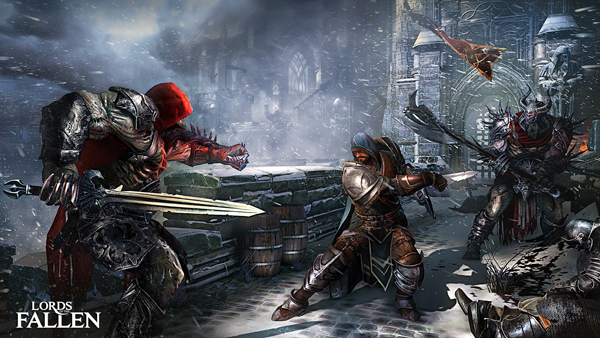 While Lords of the Fallen is a visually impressive game, its presentation is let down a lot by its audio. Many of the grunts and groans of the enemies all sound the same, what is more disappointing however is the fact that many of the weapons sound the same as you swing and slash them – since all of the weapons feel and handle so differently to one another, the fact that they all sound almost identical is a huge let-down.

Easily the weakest part of the audio is the voice acting. Interactions between characters all come across dry, stiff and lifeless. It is almost as if the voice actors read their lines off the script without any indication of the tone or context of the situation. It almost feels like the game’s sound design was of little importance to the overall development of the game, and it really brings down the whole package. 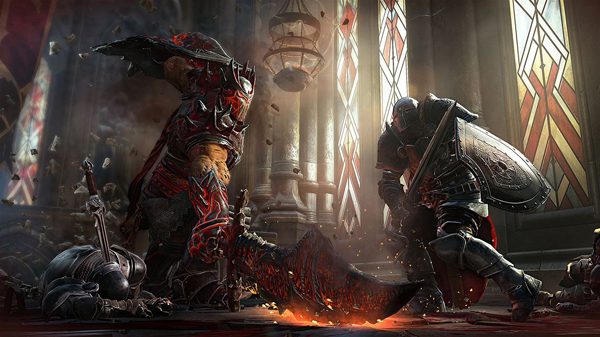 While bearing many similarities to Dark Souls, Lords of the Fallen manages to step out from the shadows and become a game that is unique to itself. With some of the best visuals going around at the moment, an interesting take on the fantasy genre and combat that rewards patience over all else, Lords of the Fallen is a fantastic game that is only held back from true greatness by its lackluster sound design and frequent bugs.