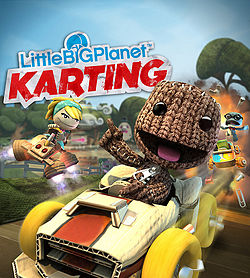 Sackboy is one of this generations more traditional mascots. In a world full of realism and gunfights, he’s a squishy cartoon character who runs around crazy worlds trying to save the day. After a long love affair with platforming which has produced some stellar titles, Sackboy and his developers have jumped into another genre that has sadly become old school -karting. Taking over somewhat from Modnation Racers, it would seem like a perfect fit.

I’ll confess to hugely enjoying previous LBP games, the recent Vita release is one of my games of the year. But this time Sackboy hasn’t struck gold, and whilst that would be okay for some other games, Little Big Planet suffers by comparison to both it’s platforming brethren and Modnation Racers.

The plotlines of the Little Big Planet series have never been a selling point for the games, but they have always been a more than tolerable dose of charm and light humor. As in previous adventures protagonist/mascot Sackboy must save Craftworld and its denizens from an evil force, this time a bunch of go karting malcontents called The Hoard.

Sadly there is something missing this time around, with the cutscenes losing their light grip on player attention and becoming something to be immediately skipped. Precious few karting games have even bothered to sling a story together, but LBP Karting’s failure is all the more obvious because of the success that has gone before it in the series.

After the traditional opening salvo of Pod, Poppit and Stephen Fry, players are let loose on the actual racing. Presented this time on numerous LBP worlds, tracks and mini games are opened up by progressing through the story and placing in the top 3. 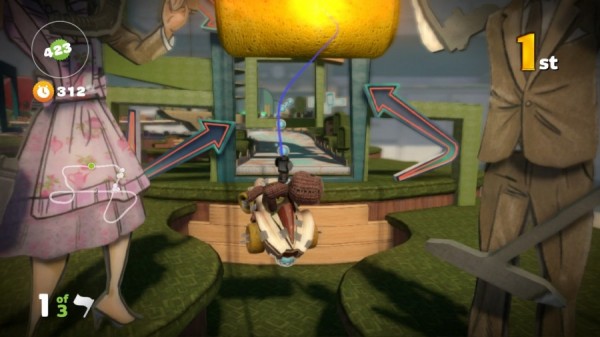 The racing mechanic is a simple affair, using a boost to drift system with a good dose of comical but by the book weaponry. The grapple hook from previous games also makes an appearance, as does the ability to give fellow players a good smack in the head if they get too close. Whilst the controls are tight and the drifting entertaining, there’s nothing new or fast enough to make the racing exceptional.

What really lets things down is the track design. As always with Little Big Planet the locales are packed to the rafters with themed goodies, but the design doesn’t extend to the road itself. There isn’t a single stand out track here. Where previous games had plenty of moments best described by a delighted bunch of exclamation and question marks, Karting just produces some mildly entertained periods. There’s nothing outright bad here but nothing to revisit and learn like the back of your hand either.

In addition to the bread and butter races you’ll sometimes come across battle arena challenges or solo checkpoint races. The checkpoint races are a fairly minor part of the game, but free up space for some trickier track design by taking away the other racers. The battle arena levels can be capture the flag or simple death match type games, and often play home to the levels that come closest to being memorable.

Flinging weapons around is vastly improved by having some human competitors, indeed giving the AI’s the boot is a good thing all round. Local multiplayer allows up to four players to take part split screen, and of course there is also an online option.
The weapons themselves are a standard collection of missiles and boosts, and can be used offensively or to defend from other players attacks. Only being able to hold one weapon stymies the strategy a little, and the system is completely open to cheap shots that can wreck an entire race in an instant. 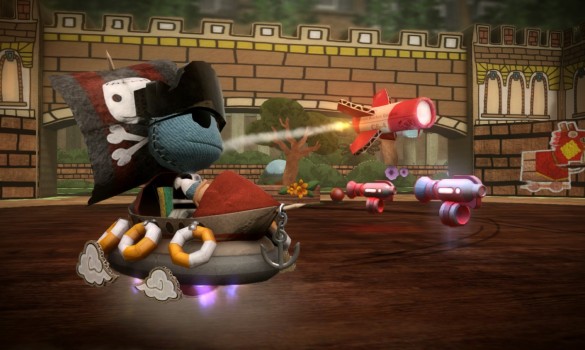 Overall the racing experience in Little Big Planet Karting is simple and a nice pleasant distraction, but it definitely left me hankering for the previous LBP titles or even a bit of Crash Team Racing. If you already have a preferred multiplayer racer there is just no reason to cross over unless you are a huge Little Big Planet fan, and even then one who is sold on the idea of creating more than racing.

The extensive creation tools that are a given for the series return once more, allowing more dedicated players to create and share their own custom tracks. The same huge range of bits and bobs is on offer, with the collectibles scattered across tracks and unlocked for placing well. Creating tracks feels more comfortable than creating platforming levels, perhaps down to the easier to grasp starting point of what is essentially a giant sandbox. As with Modnation Racers you drive to create the track itself, and can then gradually put together whatever your creative flair allows.

There’s no denying that the Little Big Planet style is bursting out of this game and not just slapped on top. Levels remain packed with visual delights of a Craftworld flavour, even if you don’t have the same opportunity to appreciate them as you race by – much of the intricacy is background. Despite the inherent quirky flavour things don’t feel as smooth and slick as in the previous games , and there is a noticeable difference in visual quality.

As always with the series the music is superb, full of energy and neatly matched to the racing environment. Some familiar tunes pop up from previous LBP games, handily bringing up a bit of nostalgia to shore up the gameplay.

As a Little Big Planet fan LBP Karting made me want to play the other games for all the wrong reasons, and as a karting fan it made me long for Crash Team Racing, a game that is over a decade old. There is fun to be had here if you go in for multiplayer, and the creator mode is no doubt a selling point for some, but unfortunately the game never rises above ‘good’, which is far below par for something with this name on the box. Put simply this game just left me cold.