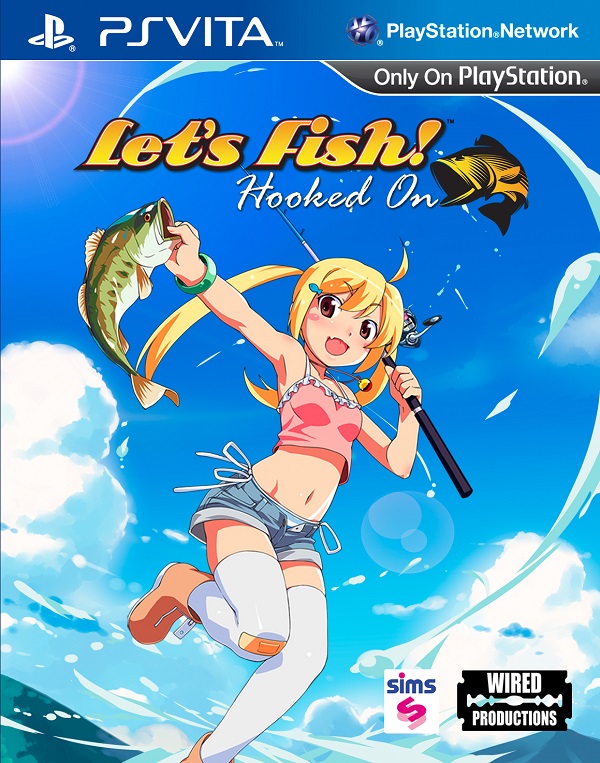 Overview:
The PlayStation Vita has had a very unique life so far in the gaming industry and despite being released a year ago at this point, there are still many game types which have yet to appear on Sony’s latest handheld. However among the missing genres, the fishing genre is not one of them. Originally part of the Vita’s launch window in Japan under the name Let’s Try Bass Fishing: Fish On, Wired Productions has brought this unique game over to the West as Let’s Fish! Hooked On. Is this combination of moe anime characters and fishing mechanics designed by the developers of Sega Bass Fishing a keeper? Let’s find out.

Story:
Interestingly enough, Let’s Fish! Hooked On actually has a semblance of a story mode, which is very rare for a sports title, let alone a fishing game. The story of this title is all contained within the World Tour mode where players will be able to select from four different characters, each of which has their own minimalistic backstory and story line as well as a unique set of starting skills such as better hooking, casting and more. 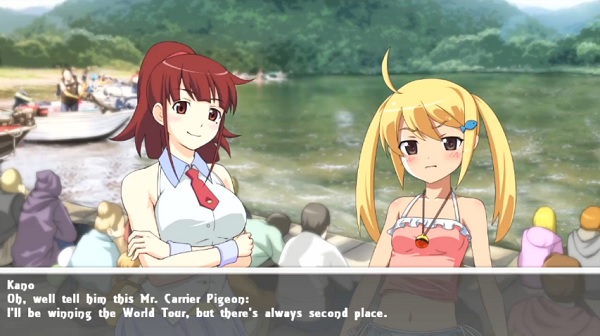 Now let me say, this game’s story fits right into a few very Japanese tropes which would appear in an anime title, so a few people unaccustomed to storylines such as these will certainly be caught off guard. As for the characters, there are plenty of familiar characteristics and personalities here as well. The only male character is trying to live up to his father’s legacy, a childhood friend with a tsundere-loli personality tries to prove that she is capable of more than simply tagging along, a skilled female angler who is looking for more in life than simply fishing and oddly enough, a young female mage (magical girl) that is attempting to use fishing as a means to bring peace.

The only time the story is moved forward at all for these characters is occasionally throughout the World Tour and this usually happens after a certain tournament or an advancement in your rank. The characters have a certain sense of charm to them and those familiar with anime will probably have a laugh or two extra. While not a huge focus, wrapping up tournament play with even the semblance of a story is still interesting enough to be noteworthy for a fishing title.

Visuals & Audio:
As far as graphics go, Let’s Fish! Hooked On is hit and miss. The first thing that can be said about the game is that it is very colorful and at times it actually is rather gorgeous looking on the Vita’s screen. The characters are nicely animated and whenever a dialogue section appears, their character portraits are impressively done and the anime style translates well into the 3D models used for the characters, including the standard moe traits the female cast has. 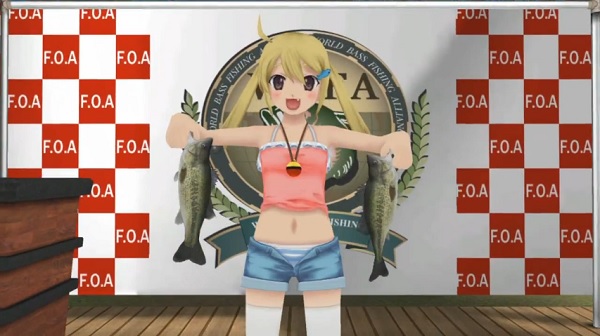 Above water, the environments are decently handled, though it should be worth noting that gamers will be spending the rest of their time below the water line and here things can become very iffy. The fish are nicely detailed, but have a horrible pop in rate, with fish suddenly appearing magically at times and while there are a few underwater scenes that are impressive with various underwater debris littering the lake bottom, there are a number of blocky textures that are so pixelated it wouldn’t even look proper on a PSP title, let alone a Vita game.

It is also worth noting that while the title’s focus isn’t on story, the dialogue sequences in the story mode are not handled like in a visual novel where players have control. Despite appearing like a visual novel, the dialogue plays out like a cut-scene that players are unable to control which is a minor gripe, but still something to pay attention to. 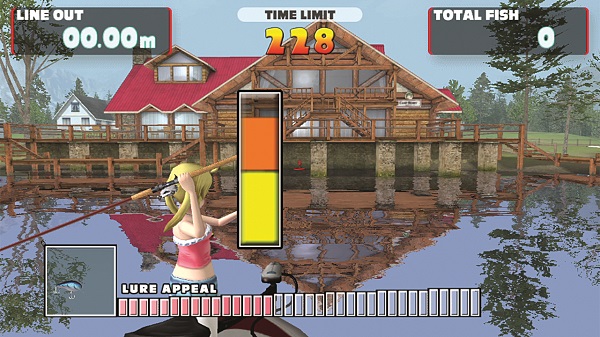 As far as background music goes, the game features some nice calming background tracks which work well for a game that can be played simply to relax such as this. It is worth noting that none of the in-game dialogue is voiced and the only actual voice work is for canned phrases that characters repeat ad nauseam during gameplay as they comment about what is happening.  It is also worth noting that these phrases are only presented in English and there is no option to shift to whatever might have been available in the original Japanese version of the game.

Gameplay:
Let’s Fish! Hooked On is a rather simplistic game at heart, but it is certainly one that can be a little bit confusing at first. This can be blamed on a number of things, such as the fact that the tutorial for the title is terribly done and players are ultimately left jumping into the deep end and either trying out the game’s basic training mode to figure things out, challenge mode to test themselves and try to rank on the world leaderboards or of course take on the game’s aforementioned World Tour story mode.

Now it should be worth noting that players should try and practice a little bit outside of the story mode first simply to get a handle on things. Whichever mode you choose, players are presented with a stage and a certain goal to usually catch a certain weight or amount of fish to reach a goal. Sometimes these goals are spiced up by only allowing certain fish such as Bass to be counted to your final total. 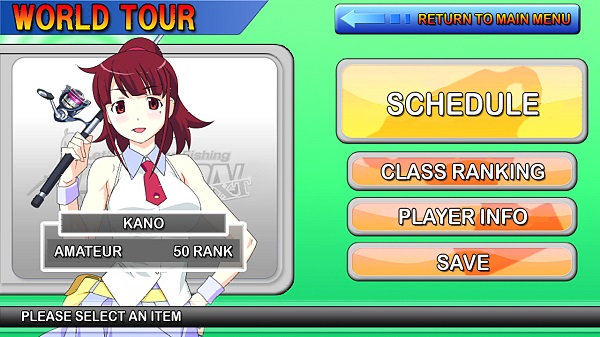 Now, once you enter the lake, players are able to pan to the left and right of a relatively large venue and they can zoom in to see if fish silhouettes appear near where they will be casting. Now, you see, Let’s Fish! Hooked On allows the player to use the touch screen controls or the basic face buttons to do a number of things in the game and the best way to make use of this feature is to combine the two. Players can cast the line out by tapping the circle button to select the spot, and again to determine their cast’s power/accuracy.

Once you’re under the water, you can either reel in using the face buttons such as X to reel in slowly, circle to reel in quickly, triangle to let line out to reduce tension or triangle to instantly bring the line back. Of these buttons the only really useful one is the triangle as it can quickly undo a poorly aimed or planned cast and save you time. Instead all of these reeling maneuvers can be done through a touch screen slider on the right side of the screen, the higher you raise the slider the faster the line is reeled in and if you drag it all the way to the bottom, it lets the line out. 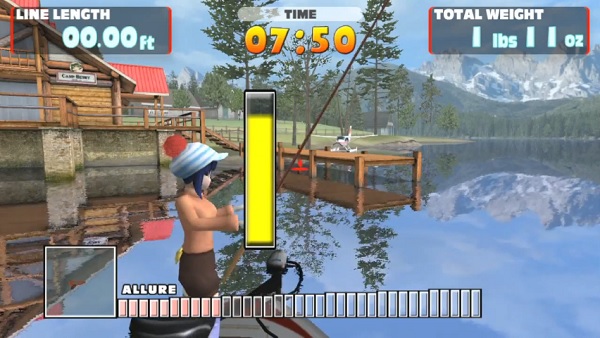 Why should you do this you may ask? Well whenever you catch a fish, a quick time event appears that forces the player to slide a hook icon into a fish icon to properly hook the fish. Plus after hooking a fish, players will need to often swipe another icon in a certain direction to reduce line-tension and prevent the fish from snapping the line or tossing the lure. By using only the touch screen for reeling, hooking and reducing tension, players will have an easier time of things, though of course certain fish will still be challenging of course.

If this isn’t you’re thing, then players can still use the analog stick to try and hook the fish and avoid breaking the line, however it is less accurate than simply using the touch screen controls and trying to quickly adjust your hand placement may cause a fish to get away. 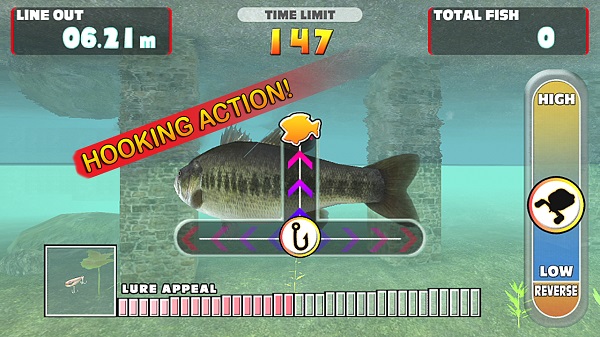 Now catching and reeling a fish in may be putting the cart before the horse here however, as you will still need to select a proper lure to catch those fish. There are a number of lures to choose from all ranging from either floating lures and bottom lures to lures that float at a certain depth. The game provides a helpful “allure” meter for each lure in the tackle box which shows how attractive a certain piece of bait is for the stage you’re currently on. This allure can be raised and lowered while under the water depending on how you reel in the lure, so trying to make you’re bait mimic a sickly fish or drowning insect may be useful depending on how the allure meter changes.

However there is an issue here… and that is the fact that the fish AI is very poorly handled. While attracting fish may seem relatively easy and the camera pans around to let you know when a fish is interested and about to bite, the fish itself is the problem. I can’t even count the number of times fish were more than ready to bite the lure, swam at it with their mouths wide open and missed by a wide margin. Even stationary bait can cause fish to simply open their mouths, swim into the lure and miss it entirely and this can repeat up to five times for one single fish, and it gets even worse when multiple fish are attracted to the same lure, as it simply becomes embarrassing to watch open mouthed fish swim in circles for a minute before finally giving up as the stationary lure was too difficult to catch.

Overall:
To say that Let’s Fish! Hooked On is an oddity wouldn’t be too far of a stretch. It has taken two things which seem rather separate from one another and put them together in a decently managed game. While poor fish AI and a few graphical issues are problematic, the game’s lengthy campaign featuring four enjoyable characters each with a little story of their own makes up for it slightly. The biggest thing with Let’s Fish! Hooked On is that it is a fun title that you can easily pass the time with, whether you’re trying to make your way through the challenges, following the story of one of the characters or simply watching the fish swim around in the game’s underwater viewer, Let’s Fish! Hooked On, despite it’s flaws, is an enjoyable title with plenty of charm.