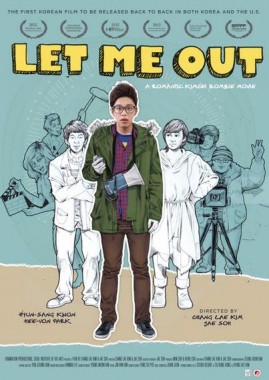 Overview
Coming of age films are kind of special in many ways, as they bring the viewer – no matter how old, back to much simpler times when new experiences were exciting and the world still fresh. Let Me Out falls right into the genre, featuring a group of young art students who are trying to make a film, lead by a director who knows it all, but still knows nothing. Already grabbing a ton of praise overseas, does the Korean flick Let Me Out translate well, or is it weighted down by its own cast? Let’s find out. 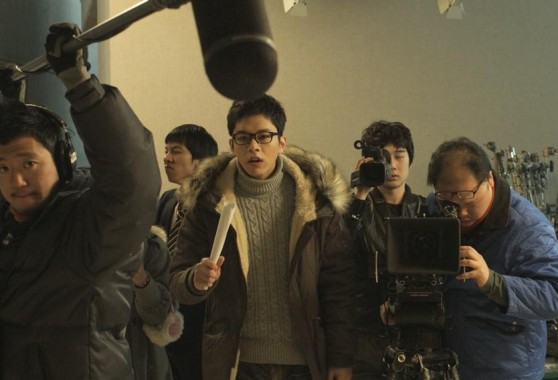 Story
Mu-young is ready to finally graduate film school, but has yet to make a film. With so little experience, you’d think our geeky protagonist of Let Me Out would be a bit humble, but much like modern society as a whole, this chap would rather critique others about their work than get his own feet wet. After a bit of force due to a pending graduation, Mu-young pulls it together and starts filming a zombie melodrama, titled “Let Me Out”. He has the cast, the crew – and everything else he needs to succeed, but his inflated ego and need for perfection continually block his entire team of friends from finishing the flick, along with a great deal of accidents and hiccups that all filmmakers run into in the industry. 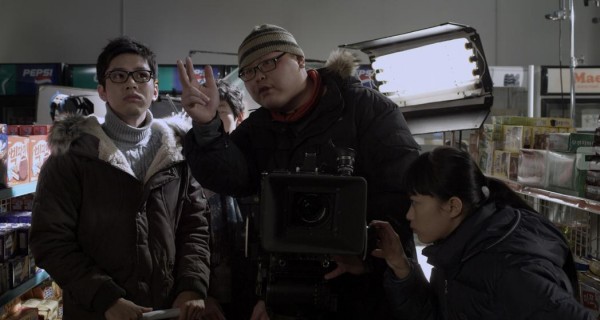 The concept of Let Me Out is actually clever, as it gives us a look into what young filmmakers have to deal with when they don’t have a monster budget and are going off passion alone. So many people think they can do better when they watch a film, and Let Me Out acts as a bit of a commentary on the subject (ironic we’re reviewing it, isn’t it?). Its not as easy as getting some friends together with a camera. Also, you can’t let your passion and pride stand in the way, and sometimes working with friends is the worst way to start as emotions run high during long nights and hard days on the set. These lessons shine through clearly with this feature, but even though the messages are clear, the characters themselves come off as a bit lacking. 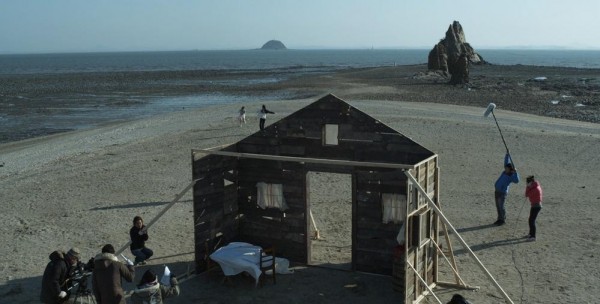 Mu-young is supposed to be arrogant. This is a kid who thinks he knows it all and during the film, constantly quotes great directors from all over the world as he tries to shoot his own masterpiece. I get that, but this is also a coming of age film, and I just couldn’t get behind his character very much as he is truly the “ass-clown” that others brand him as. Sure, the supporting cast are great. Ah-young is a quiet yet eager female lead for the student film, and as the “best friend”, Yong-woon’s attempts at producing bring a lot of humor to what would have been a dry story otherwise. That said, your lead can be the most arrogant and terrible person in the world, but he has to be likable. Mu-young has so many chances to show some heart, but the constant bickering and self pity just paint him as a miserable wannabe director who never gets over himself. There is some growth that we get to see this whole cast experience, including Mu-young, but it comes at nearly the end of the film, and that stigma is still stuck to our protagonist when the credits begin to roll. 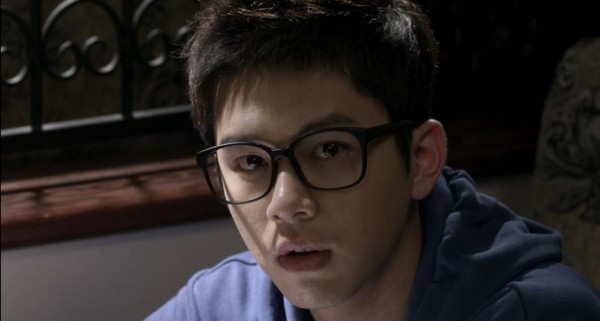 The writing is actually strong, as in many ways, that is why I have such a distaste for the main lead. I tried to think of a good number of films that are similar after finishing Let Me Out, yet I couldn’t quite peg anything right off-hand, meaning that the viewer can at least look forward to watching a film about youth without having to deal with the whole immature storylines that plague theaters yearly. Let Me Out fails at making its lead likable, yet is better for it in some ways as it feels real. Think about your friends who are like Mu-young. How many people do you know that judge everything blindly? These are people that go to forums after seeing a trailer, whining about the smallest detail before they even see the full picture. This isn’t some story about “lets get laid” or “we got to party”, its a story about how having an ego and too much pride can make you lose everything you cherish, including your dreams. While they definitely put it on a bit too thick with Mu-young, I at least understand why – growth or not.

Visuals and Audio
As far as the whole atmosphere for Let Me Out goes, I would say that while you can tell there was a budget, the studio that made the film about making a film did a great job at capturing the feel of what it would be like to be on the set of a cheap zombie film. The cast all look their parts as well, but sometimes seem a little too high maintenance to be having this much of a struggle with finance. The make-up used definitely shows our cast’s struggles however, as the zombies look laughable – yet still come off as charming in a quirky way. Remember that “Take on Me” video by A-Ha? Well, the storyboard inspired music video also receives a nice little tribute during the opening sequence as well, as the credits for the opening and closing follow suit in giving us a nice little theme to mend this production together. 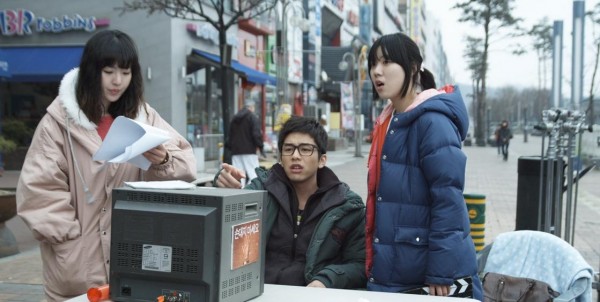 The music is a bit of a slow, dramatic taste of K-pop and rock, which suits the movie well during some of the softer scenes. The upbeat tunes at the start will get you in the mood for a fun feature and the same tune brings back the mood at the end to bring the film full circle in many ways. Of course the language is Korean, but subtitles are present. This may be a bit of nitpicking, but the grey border around the font was a bit distracting at first, though I did get over it within about five minutes and was able to follow the subtitles fine afterwards.

Overall
Let Me Out is a fun, and rather interesting look at a place we don’t get to see much in cinema, portraying the struggle before the director shouts “action”. While the lead character is an ass, he is meant to be that way and fits in well with a plot full of fake zombies, falling sets, and general disaster. This is the kind of film that gains notoriety not by dollars made, but by garnering a cult following, which I can see happening due to how quick these types of films catch fire among teens who could easily relate with these types of characters. Though it isn’t that Christopher Nolan film that Mu-young so desperately wanted to make, Let Me Out is definitely worth a watch and follows in the footsteps of Napoleon Dynamite, Juno, and Scott Pilgrim as another original independent film with some long legs to stand on.