Legendary Wars is toted as an action RPG side-scrolling tactical RTS title, and features unique units, boss battles, upgrades and special moves. You’ll be defeating monsters and skeletons, gargoyles and grim reapers while levelling up your units and meeting new ones along your warpath. 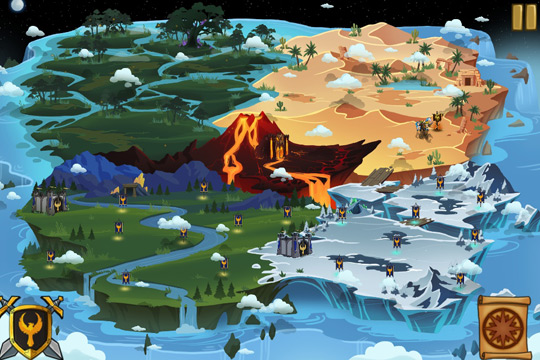 The story largely consists of text-only conversations amongst characters in between battles. These are played out as a few dialogue boxes with the speaking characters popping up above them. The dialogue does communicate some semblance of story, which is pretty basic and sparse; but most of it consists of some witty banter between characters, featuring some justification for any minor changes in gameplay in the level you’re about to play.

From what I can gather, you’re leading an army (and of course picking up new friends along the way) in an effort to gather all the sunstones which have been scattered across the world to ready yourself to face Magma, the evil demon entombed in a huge volcano in the centre of the map.

So the story is there… but only just. And not much of it actually influences the gameplay all that much. Speaking of which… 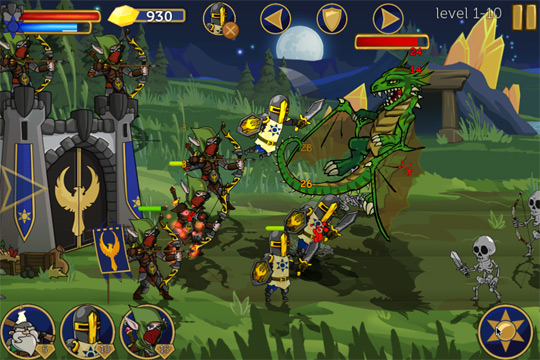 The basic idea is you have a castle on the left, the bad guys come at you from the right, and you have to defend yourself. You do this by sending out units, which you pay for by mining “stuff”, and controlling them individually or as a group. Each unit type also has it’s own special move which can come in handy in the more taxing levels. 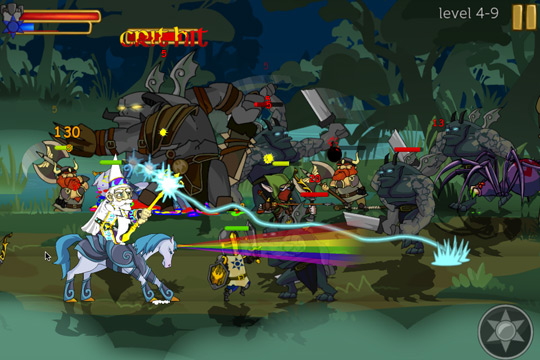 Each battlefield is split into 3 “lanes”, making it a little easier (but not a whole lot) to see what’s going on when there’s a ton of good guys and bad guys. The problem is that units don’t automatically change lanes to fight an oncoming enemy… that is until the game turns on that feature for you. It’s a little weird that this is a “feature”, really – I would have expected it to be on all the time, but as it stands, the units will only react to other-lane monsters if you tell them to move either left or right. This, coupled with the group commands make the game quite straightforward to play… Once you get your head around how things work, that is.

The controls are made up of a handful of buttons along the top to control your units, and some thumbnails along the bottom to produce them. If you need to select a particular unit in your army you simply need to tap on them. When in the middle of a battle, however, when you’ve built up your army, and you’re clashing with the bad guys, it can be pretty darn tricky to grab the unit you wanted to. Luckily though, you can usually get by on just using the group controls for the most part. 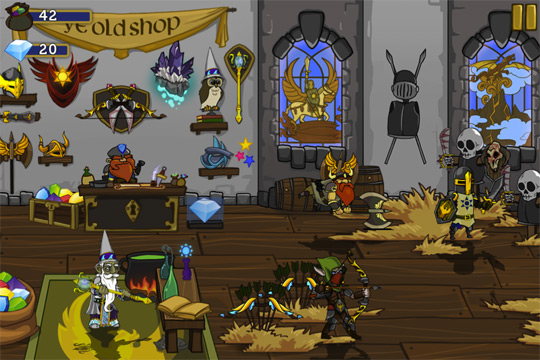 In the downtime between battles, you can upgrade your units’ stats and even the castle itself, making it easier to take on the ever increasing hordes of enemies and the new enemy types that are introduced during the game. You can also make in-app purchases to buy more gems and moonstones to spend on stats and upgrades respectively.

New characters/units are introduced throughout the game through dialogue, and are usually accompanied by a solo mission, where you control just the new dude, running along an assault course of baddies and obstacles. This lets you try out the attacks and special moves to see how they would work in a real battle. 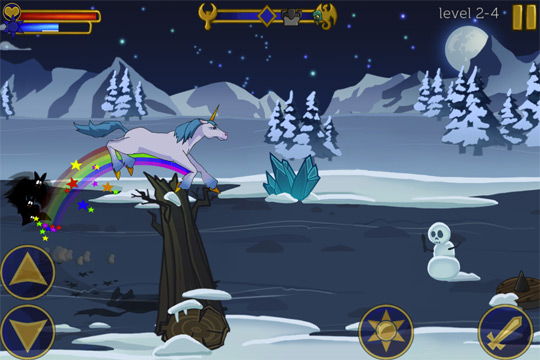 Apart from these sections, though, the game stays pretty much the same for it’s 50 levels. After a while, you find your groove and stick to it for every battle; there’s not much in the way of tactics to this game… as the game goes on harder baddies are introduced, and that’s pretty much all that changes through the game.

The graphics in this game are really, really nice. Everything’s in wonderful vector art, with the cartoony style and bold colours that go along with it. The animations are also smooth and well done. The armor and weapons upgrades make your characters cooler and cooler, reflecting their improved stats well, and the visual style compliments the rest of the game’s humorous style perfectly.

The music used in different menus as well as the 5 areas of the world is pleasant to listen to and nicely produced. The sound effects, too, are well done. 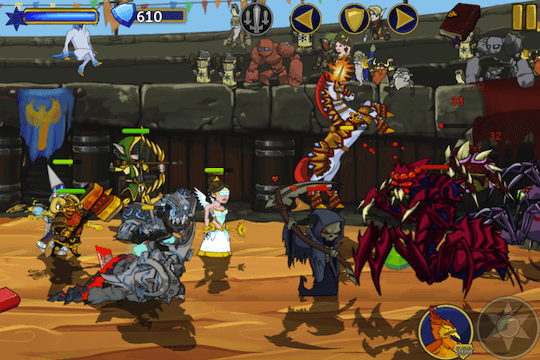 Legendary Wars is a good game. It’s fun to play for a time, even if you lose interest along the way. I’d say it’s more of a casual game with elements of strategy than a full-on strategy game, though. If you get this game thinking it’ll be a fun strategy to stretch the little grey cells, you’ll be disappointed. On the other hand, if you just want a little light strategy to waste away your spare time, then you’ll have fun with it. Between it’s humorous dialogue and colourful characters, the journey you are taken on is an enjoyable one, even if it doesn’t fully scratch that strategy itch.