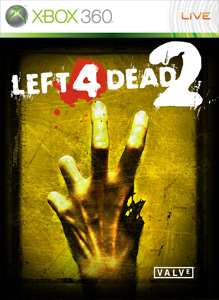 Overview
“The Passing” DLC is the first expansion for the Zombie Survival FPS Left 4 Dead 2. With it comes many extras, new achievements, and even more avatar awards. A new campaign with 3 levels in it is the main focus of the DLC and it borrows key elements from the other campaigns. A mutations mode is also added that supplies a new gameplay experience on a weekly basis. All of the extra stuff for a low price of 560MSP.

The Campaign takes place in wet Georgia town and borrows a lot of the best aspects from other campaigns. The entire campaign is dark and rainy like Heavy Rain, it has Dead Center’s scavenger finale, and the Parish’s sewer slog. While The Passing incorporates all of these elements and in itself is very fun, it doesn’t present anything new to the formula. Even the common uncommon isn’t anything special; it is a zombified survivor who instead of attacking you, runs away. The zombie survivor does drop useful items if you manage to catch him, and it mixes up the gameplay a bit. When you encounter one, you can either stick with the group and lose the items, or break off and chase him down.

Additional Weapons
The DLC adds 2 new weapons to the game. The M60 which has a huge clip size but no reload, once you run out of bullets you are out. The M60 causes serious damage to zombies but has the tendency to eat up bullets making you rely on your secondary weapon shortly after using it. The decision comes when you decide to either pick up the gun and have an east time killing a bunch of zombies, or stick with your primary and have a slightly weaker gun but for a longer time period.

The second weapon is a golf club, the golf club is just like any other melee weapon. There is no clear difference but it looks like a golf club and has an achievement for knocking off 18 zombie heads with it. 18 holes in golf, 18 heads, achievement called “FORE!”; get it?

Mutations
Mutations is the new game mode that is updated on a weekly basis. This mode tons of replay value to the game. An extra blog section is also added to further explain the mutation when it is released every week. Valve tweaks certain game types to bring a fun experience on a weekly basis. The initial mutation was Realism Versus, and while I can’t judge on one mutation solely, I found it very fun. Playing as the survivor has a much harder time surviving, while playing as the infected is much more satisfying when you know that the person you just smoked won’t be found for a while due to the realism mode being on. Mutations are planned to change on a weekly basis, so something new will be present every week for you to play. This adds tons of replay value, and there will be a vote for the most popular mutations and they will be recycled back into the mix.

Achievements
10 more achievements have been added and they follow suit with the kind of achievements you would expect from a Left 4 Dead game. There are the basic weapon usage, zombie killing, and campaign beating achievements. All of them can be acquired with friends and without much hassle. Overall the achievements connected to the DLC are pretty easy and may only require time, except the mutations one you will have to wait 6 weeks for.

“The Passing” DLC also has 2 avatar awards: A hat and a gnome prop. Both a decently easy, but the gnome will take 6 weeks to get since currently it only records every unique mutation game.

Verdict
The Left 4 Dead 2 “The Passing” DLC is a great addition to the game. Although the campaign chapter is disappointing the extra additions make up for it, including the mutations game mode. The DLC is very good at a 560MSP price tag, but the mutations game mode makes the price look even better. Though the campaign is nothing new and a bit short it is still a welcome addition to the story line. The meeting of the original survivors on the other hand was a huge disappointment and seemed pointless. I didn’t even run into the dead survivor until I replayed the level a second time.