Mobile publishing house Chillingo is still at it, and this time they’re back with Knights of the Round Cable. Now if you’re like me, you probably hear “Knights of the Round…” and immediately jump onto the nearest table, kick the air in joyful dance, and start singing this gem from Monty Python and the Holy Grail. Unfortunately, the two are not directly related, though that didn’t stop me from humming the song maniacally as I booted up the game. To be fair, Knights of the Round Cable’s premise is just as ridiculous as something from a Monty Python film: knights ride giant flying chickens to various levels of gem-collecting, rope-swinging adventures. Is this quirky platformer worthy of knighthood, or should we cry, “Off with its head!”? 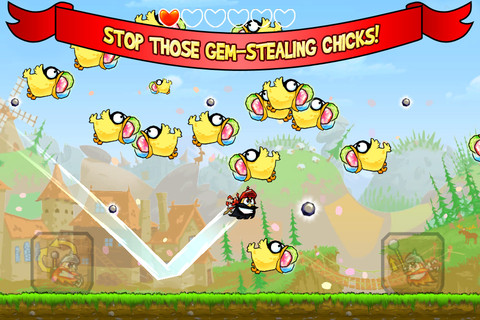 It is very hard to categorize Knights of the Round Cable into any already established genre. While calling it a two-dimensional platformer is probably the closest thing to the truth, doing so would be a great disservice to the creative and quirky mechanics behind the game.

As one of several knights, it’s up to you to visit a myriad of castle, collecting gems as you go, and making sure that you don’t suffer death from various environmental hazards (see: ghosts, dragons, nose-diving crows). To do so, your knight will swing on various pegs to spin himself about, gather momentum, and fly through the air. He’s also incredibly springy and can bounce off of hard surfaces. The swinging mechanic is simply controlled using a tap interface: tap the right side of the screen to latch on to a peg, and tap the left side to reverse direction. The simple controls and gameplay lend themselves well to the old adage, “easy to use, hard to master”. 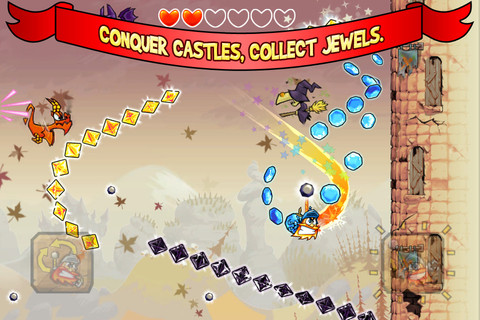 At first, you’ll probably find it difficult to even collect a single batch of gems, much less go on a collection streak the game calls a “Fiesta!”. But keep at it and you’ll get a sense of the game’s physics, your knight’s momentum, and you’ll begin to rack up triple Fiestas like it’s nobody’s business. Though why knights from England are having Spanish parties never ceases to boggle my mind. To be fair, it’s the less surprising than the fact that when you complete a castle (see: level, not even remotely an interior location) and move on to the next one, you are transported there by a giant flying chicken.

But chickens can’t fly!!! And they’re not giant!!!

Well apparently they were in AD 960.

As you move through castles, collecting gems on the way, you’ll gain some good old in-game gold, which can be spent on upgrading your knight’s health and purchasing coin-magnets. You can, however, also spend it on new knights, who each have different abilities. Everything that could possibly aid your playstyle is featured, from rocket boosts to a buffer health bar. Alternatively, you could always buy in-game coin with real world money. Strangely, none of the knights, except for the final “King Arthurion”, bear names that even remotely resemble Knights of the Round Table. Which is odd, because it’s not like there’s copyright laws surrounding old folk tales… 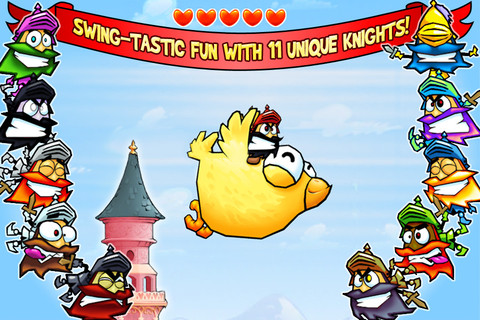 Progress in Knights of the Round Cable is achieved through completing missions (see: a three-star challenge system) that increase in difficulty as you go, and while the upgrades shop ensures you never truly feel like you’ve wasted time if you don’t complete a mission, as time goes by, there’s less to buy and still more to do. As such, the game can start feeling a little tedious, if not quite repetitive. It’s almost like the game’s concept, while deep and entertaining at its core, just isn’t enough to keep you in for an extended period of time. However, its simplicity and fun make sure that you’ll be enthralled by it for quite a few hours at least, which is more that can be said for many $60 games.

Knights of the Round Cable’s graphical design and presentation are solid. Though they won’t knock the socks off of your portable device’s screen, the look of the game is far higher than the standard set by many of the sloppily put together two-dimensional titles on the platform. Some of the effects, leaves blowing in the wind were thoroughly good to look at, in particular do a good job of making you have little “ooo” moments. It won’t take your breath away, but the game certainly looks pretty. 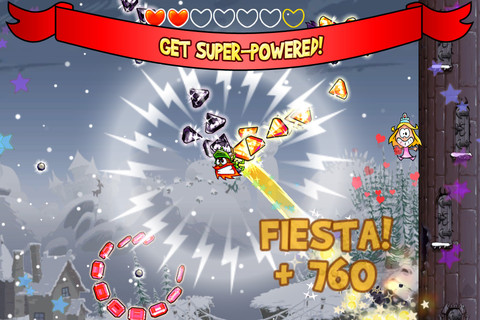 The sound in the game is serviceable. You won’t be knocking on your friends’ doors, begging them to listen to the cartoony theme, but nor will you put the phone on silent and cross your lucky stars you never have to hear the blasted thing again. I like to think it enhances the enjoyment of the game, like a middle of the range Shiraz alongside a well-peppered steak. High-brow similes aside, the game’s presentation does its job efficiently and complements the gameplay well.

Knights of the Round Cable is one of the few iOS games that I’ve recently played that can claim it’s done something truly different. This isn’t a revolution, and the game’s core mechanic eventually runs out of steam, but it is a new step in an interesting direction, and I can’t wait to see how this franchise mounts its siege for future instalments (see: a good game you should buy, and yes, that was one last castle-related pun. Just to horrify you).