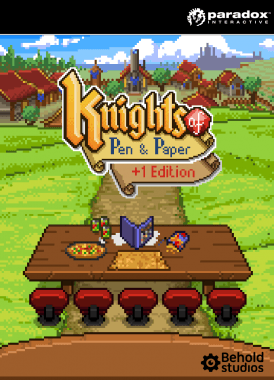 Knights of Pen and Paper started its life out as a tongue in cheek mobile retro styled RPG for Android and iOS. It quickly became a huge hit, and developers Behold Studios teamed up with veteran publisher Paradox Interactive to expand the game and bring it to Mac and Windows. The desktop version brings new content, including new dungeons, character options, and the Tavern. 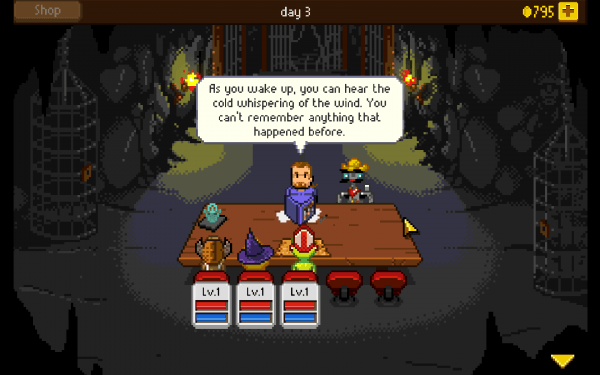 Knights of Pen and Paper follows the story of five brave heroes who band together to hunt down the mysterious Black Mage and stop his nefarious plan to conquer the many realms. The plot strikes the right balance of corny RPG tropes and classic retro charm, mixed with a dash of satirical humour. Though the plot itself isn’t the most memorable thing ever, anyone who has ever played a pen and paper RPG campaign will instantly feel at home with Knights of Pen and Paper. Most pen and paper RPG players have personally experienced the random comments by the players and the game master’s excuses for random plot holes and terrible naming choices. Behold Studios does a fantastic job of creating a SNES era retro RPG fused with pen and paper RPG culture.

At its heart, Knights of Pen and Paper is an easy to learn retro RPG that has a surprising amount of depth. Each class has four skills that are a mix of passive and active abilities. Players will travel around the world, killing a variety of monsters and completing a variety of quests for NPCs. The difficulty level can be tweaked by the player, adding or removing the amount of enemies in a fight. This is a handle option that can make the game easier for RPG newbies or a blistering challenge for veterans. Besides the main story quests, there are lots of side quests to be completed to access new classes or players can create their own quests for even more variety. 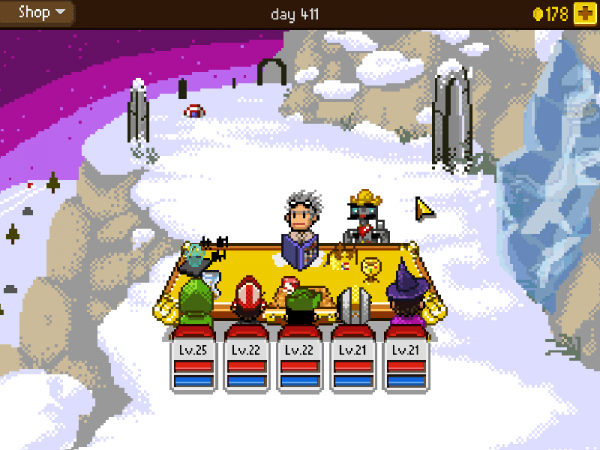 The classes are the stereotypical fantasy RPG type. They fall under damage, support, tank, heal, or some combination of the previous types. The game starts with six classes unlocked and a large variety of players to mix with the classes. Each player has their own unique passive ability that compliments certain classes well, providing opportunity for the dreaded power gamer to min/max their way to success.

There are times when the game turns into long marathons of grinding. Buying the final two party members requires gold, upgrading equipment is a risky money losing venture as it is a luck based roll, and there are plenty of accessories for both the characters and the game room that serves as an additional gold sink. It is a little strange as a PC gamer to see in game purchases for currency in a full ten dollar release, but these are all too common in the mobile sphere. Players have the option of buying the Digital Deluxe edition and starting out with 800 gold, but those trying to save some money will be in for some grinding and some smart early purchases. 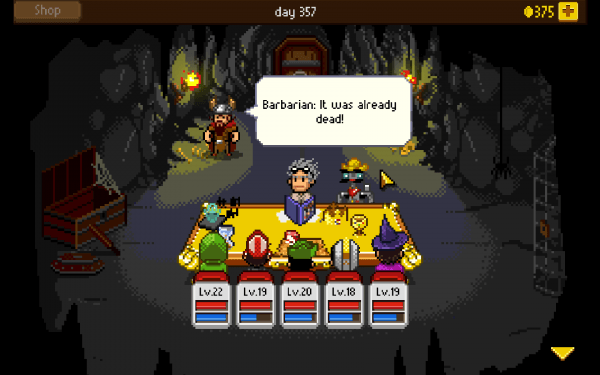 As the game started its life as a mobile game, the game is played entirely with the mouse and left mouse button. The menus are nice and chunky, lending itself well to those gamers who may not be so accurate with a mouse for whatever reason. There is a slight problem with targeting the larger enemies in the end game as the hit boxes seem to overlap, making accurate targeting a bit of a chore. There are some nice small touches that make the game’s controls easier, like the game automatically targeting the last enemy in a fight, cutting down on the amount of clicks needed.

There is only one graphic quality setting in Knights of Pen and Paper, aptly named PixelArt. The visuals are a great throwback to the glory days of the SNES. There is some serious inspiration from the old console, from the FFVI styled hats denoting the player’s class to the Super Mario inspired world map. The game is able to scale from 640×480 up to a massive 1920×1080, but I found that 800×600 seems like the game’s sweet spot in terms of size and usability. Though a few creatures look a little odd, the visuals in Knights of Pen and Paper is simply a retro delight. 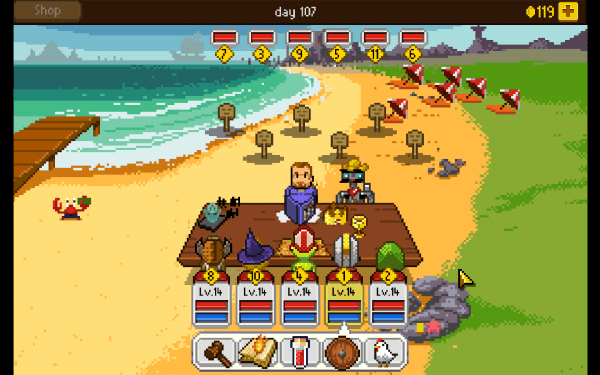 Knights of Pen and Paper is full of retro chip tune goodness. The sound effects sound like they came right out of an old SNES or Gameboy RPG. The only problem with it is that there are exactly two songs you will spend your time listening to. The battle music and the out of battle music. The two songs are good, however spend more than 30 minutes playing the game in one go and you will soon find yourself turning off the music. Considering the game received a +1 edition, I expected more tracks added to the music. 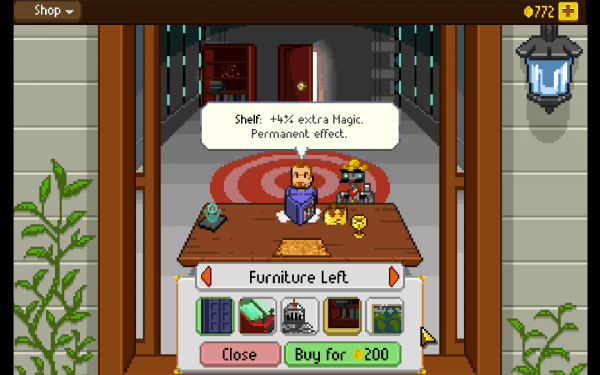 Whether you are looking for a simple RPG to get your loved one hooked on the genre, needing a casual RPG to play on a laptop/mobile device, or looking for a hit of nostalgia, Knights of Pen and Paper is a fantastic game. I wish there was more music in the game as the same two songs are tiring and the game does require a bit of grinding, but there is lots to like about Knights of Pen and Paper.