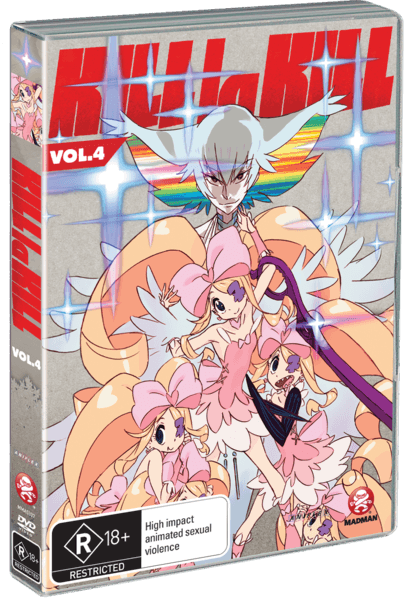 This volume of Kill la Kill features the continuation of Lady Satsuki’s Tri-City Schools Raid Trip. She is facing fierce opposition from Kaneo Takarada, the student council president of Naniwa Kinman High School. Many people were surprised in early March when this volume was given an official classification restricting its purchase to adults only in Australia. The last volume ramped up the violence to the next level, so how much further does Trigger take it with episodes 15-19, and do they take it too far?

Osaka is the last place left unconquered in Satsuki’s raid trip. Takarada rules Osaka with money in the same way that Satsuki rules Honnouji Academy with fear, and this makes for the main point of the episode; money can buy support, but fear rules people, an interesting thought when considered in relation to global politics and both past and current events. Satsuki’s real reason for the raid trip is revealed, and she fights Ryuko once again. Ryuko reclaims what Satsuki stole from her, and the main event of this volume then begins: the Honnouji Academy Cultural and Sports Grand Festival. 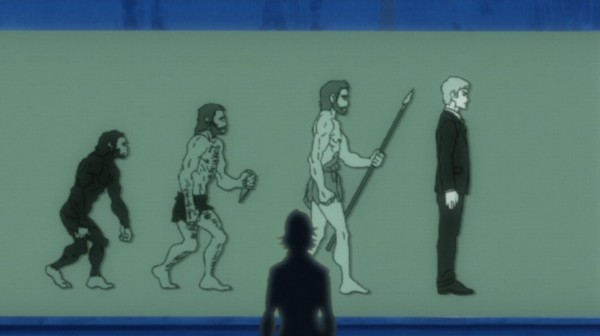 Despite the name of the festival, it bears no resemblance to actual cultural and sports festivals that can be seen in many other Japanese series. It serves as the next step in Ragyo Kiryuin’s plan to take over the human race, which actually turns out to be her plan to sacrifice the human race to Life Fibers. Satsuki’s true intentions are finally revealed, pitting her against Ragyo. Both Satsuki and Ryuko are now working towards the same end together. More details are revealed about Ryuko’s family, as are the horrifying atrocities that Ragyo committed. As Ragyo’s plans are put into action, enemies become allies as the members of the Elite Four join with Nudist Beach, the headquarters of which were damaged by Nonon Jakuzure under Satsuki’s order.

Following episode 15, the action scenes are not as fast-paced as they have been up until that point. The violence increases significantly, with copious amounts of blood spurting from one character’s body at one point, causing blood to rain down for several seconds. While this is even more extreme than the violence shown in the last episodes, viewers may believe that the violence against this character is justified, if not straight away then when her actions in the past have been revealed. These actions include her experimentation on her one-year old child, who died in the process. Having no compassion towards the dead toddler, she experiments on her new baby girl by connecting life fibers to her brain, which has been revealed by removing the back of her head entirely, an event that is graphically shown. Viewer discretion during this scene is advised, as it is extremely disturbing and sickening, made all the worse by the baby’s crying and helplessness.

As episodes 16 to 19 prominently feature Nudist Beach, the organisation formed to destroy Revocs, Ragyo Kiryuin’s clothing company that is taking over the world, there is much more nudity in these episodes. Not only do Aikuro Mikisugi’s nipples radiate a bright purple light, but now his genital region does too. Unfortunately, the real-life implications of a homeroom teacher standing naked in front of two of his female students is an issue that is never discussed in Kill la Kill. One might also wonder how his clothes just fall off of his body with no provocation on multiple occasions.

The other major issue with these episodes, found mainly in episodes 16 and 19, is the continual sexual abuse of Satsuki by her own mother Ragyo. In episode 16, while Satsuki is in the bath at her home, Ragyo uses her hands to sexually stimulate sensitive regions of her body while the camera carefully avoids directly showing what Ragyo is doing. That sexual abuse is even featured in an already tasteless anime is a problem on its own, but that Satsuki did not say no or even remotely attempt to stop her mother makes the writing even worse. Taking matters even further, Ragyo later traps her in a giant cage, binding her hands together with a chain hanging from the top of the cage. Now completely helpless, Satsuki is forced to endure more sexual abuse from her mother, which include smacking Satsuki’s behind several times. This makes up the majority of the reason the Australian Classification Board classified this volume as 18+, and these scenes are not even beneficial in any way whatsoever. There is more than enough presented to make viewers realise how evil a person Ragyo is and to feel sympathetic towards Satsuki and her true cause, so these episodes should not be viewed in their entirety. 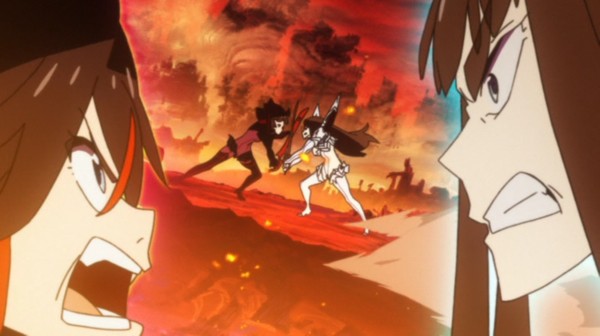 The new opening animation premiering in episode 16 is in the same style as the animation for “Shirius.” The new ending animation sequence focuses on Mako Mankanshoku in a somewhat deformed state. Fans of Mako will enjoy this animation, which features Mako doing completely random things. Episodes 15, 17 and 18 do not use more than a few seconds of the opening animation, or any of it at all, however the opening theme song is played at the end of episode 15.

Each episode tends to use the same music as the last in this volume, and at the same point in each episode too, meaning that some pieces of music are barely heard at all. Fortunately, the quality of the music is such that this does not matter too much. The voice acting continues to be as good as ever, although the pronunciation of names and terms continues to be particularly dreadful, even by the usual standards of English dubs. When characters in anime are given accents in dubs, the choice of accent is generally met with negative opinions, but the choice of accent for Kaneo Takarada here is an surprisingly effective choice that enhances the comedy. It is unfortunate that Madman’s release does not include English credits following each episode or at the end of each disc; it would be interesting to find out which voice actors contributed to the English dub. 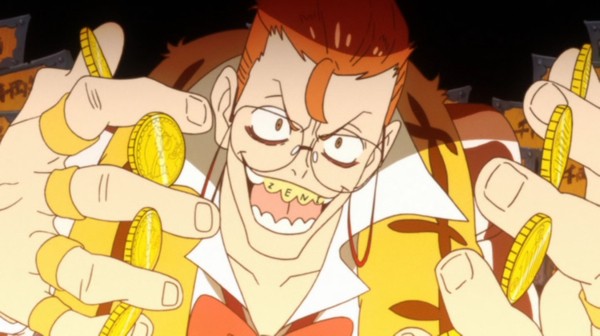 The new opening song “Ambiguous” is a great replacement for “Shiriusu,” and “Shin Sekai Koukyougaku” is a fun replacement for “Gomen ne, Ii Ko ja Irarenai,” although there is a heavy contrast between the fun feel of the song and the dark and disturbing content of the episodes.

On-disc extras include the textless version of the new opening and ending animation and the ‘web-version’ episode previews. The previews featured in the extras menu are actually the same previews that follow the TV broadcast version of each episode. Given that Senketsu states in preview for episode 20 that viewers will have to watch the web-version previews from that episode onwards, it is strange that the web-version previews have not been included on any of the volumes so far, even though they are listed as being included. 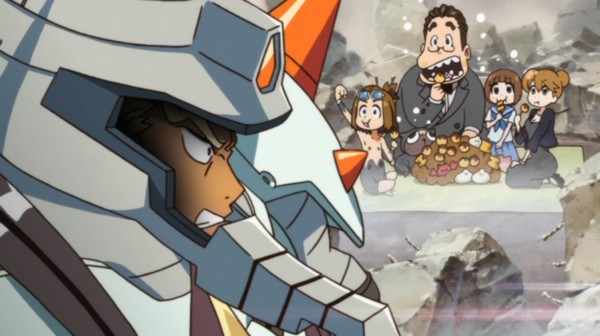 The first episode of this volume is the final one to feature the fast-paced insanity and humour that has characterised this series so far; the following four episodes mark the almost complete shift from this being an action-comedy to being an extremely disturbing drama. It is often the case that attempts to add drama into a series will diminish its entertainment value and turn it into something that no longer bears any resemblance to previous episodes. Kill la Kill certainly does not retain all of its familiar comedy as it descends almost irreversibly into an dark, endless pit of evil. Although there have been several extremely disturbing and sickening scenes so far, there is some hope that the series will reverse its course instead of continuing to present an unnecessarily dark and dramatic revenge plot.