Jotun is the first game from newly formed Canadian indie devs Thunder Lotus Games. Funded through Kickstarter and several Canadian media foundations, Jotun is inspired by Norse mythology. The game tells the story of a Viking warrior princess named Thora. After drowing to death during a storm, Thora is denied entry to Valhalla. Taken to Viking Purgatory, she is given one chance to impress the Viking Gods and earn her way into Vahalla.

The ideal Viking death is to perish in battle so the warrior can go to Valhalla and serve at Odin’s side. Since she failed to die in combat, Thora is given a second chance to prove her worthiness by the Gods. She is sent to Viking Purgatory to battle five massive elementals called Jotuns. As Thora defeats the Jotuns, she begins to share her life story with the player. Her story touches on intrigue in the family and her path to earning respect as a female warrior. It is an interesting plot that is accompanied by Viking myths told throughout the game. The resulting combination is an enjoyable epic. 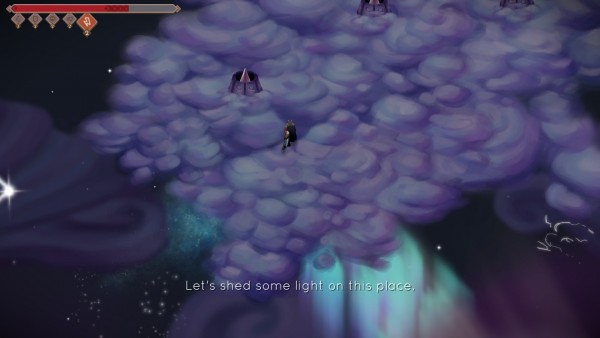 Jotun is an action adventure game that mixes puzzle solving, exploration, and some incredible boss battles. Don’t get lulled into a false sense of security with Jotun’s storybook art style, this game is designed to be challenging. The game is split into five zones. Thora must explore levels to unlock the runes that will open the doors to the area’s Jotun. The exploration portion of Jotun is easily its weakest. It tends to be a rather dull affair due to Thora’s plodding pace. In each level, there are two extra objectives that are supposed to be optional. One is the God Power that will give Thora handy new abilities and the other is an apple that will add some extra health. For most players, these two side objectives are not actually optional as the bosses are already blisteringly hard with all the abilities and max health, forcing players to explore at lengths. The God Powers are a little challenging to find, as they are marked on the map. The apples on the other hand can be downright devious as they are in out of the way places not marked on the map. The real challenge is that the map is exactly that, a map. The player must figure out where they actually are on their own. 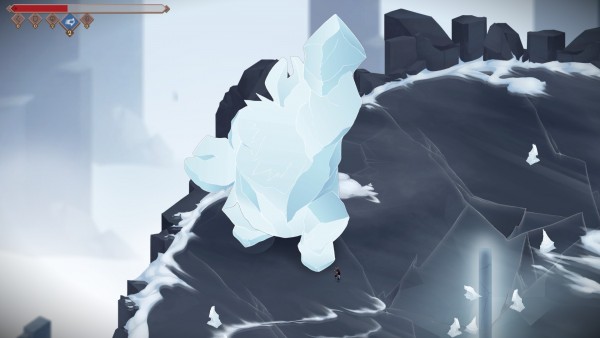 The level design is a bit of a mixed bag. I really like the fact each level has a unique theme and a mechanic that will later show up in the zone’s Jotun fight. On the other hand, some of the levels are an absolute drag. Thora doesn’t move with much gusto and some of the areas are just packed with long runs or annoying mechanics that are incredibly frustrating. The Crater level is probably the worst of the pack, mixing utterly frustrating mechanics, long runs, and incredibly well hidden side objectives that makes the level feel like some sort of mind numbing purgatory in its own right. On the other hand, there are some great levels like The Northern Sky that focus more on puzzle solving and less on the exploration. 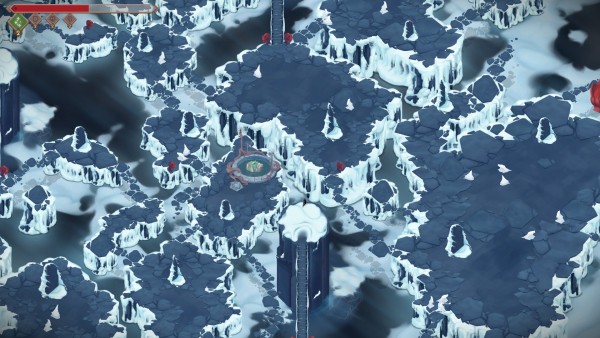 Without a doubt, Jotun’s strength is its epic boss battles. Each of the five zones is capped off with a multi-stage boss battle that mixes in some of the gameplay mechanics featured in the levels before. Even with all of the God Powers and health bonuses unlocked, the boss battles are fiendishly difficult and will test the skills of even the most veteran gamer. Since it’s possible to proceed through the game without any bonuses or abilities, I suspect there will eventually be YouTube videos popping up of especially skilled players pulling off complete runs of Jotun with only the starting health and no abilities. The boss fights actually remind me of raiding in MMORPGs, where players are faced with physically giant bosses that require memorizing attack patterns and dodging incoming damage without failure. For the most part, each death feels like a learning experience and there’s a fantastic feeling of achievement every time a Jotun falls. 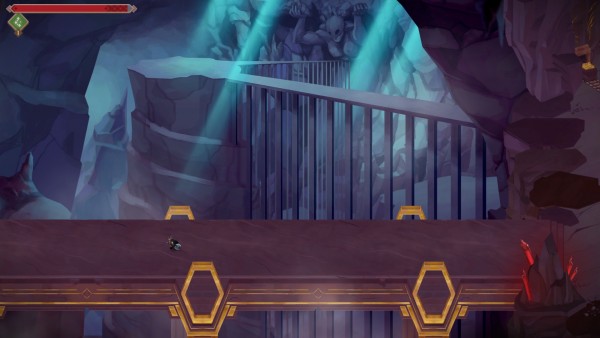 Jotun does struggle a little with some hitbox issues. Certain Jotuns can be particularly difficult to hit, as what is on screen does not always coincide with their hitbox. I noticed this situation was most prevalent when a Jotun was no longer standing for one reason or another. The game also seems to struggle a bit with moving projectiles. This is most apparent in the game’s final boss fight, where Thora will actually clip the spear and take no damage or clearly dodge a spear and take damage.

Jotun’s art is hand drawn which gives the game a classic Disney-like look. The game is filled with beautiful landscapes that the designers really want players to enjoy. There are plenty of areas in each level where the camera pans back to treat players to a better look at the gorgeous art. The game is easily one of the best looking indie titles in 2015. 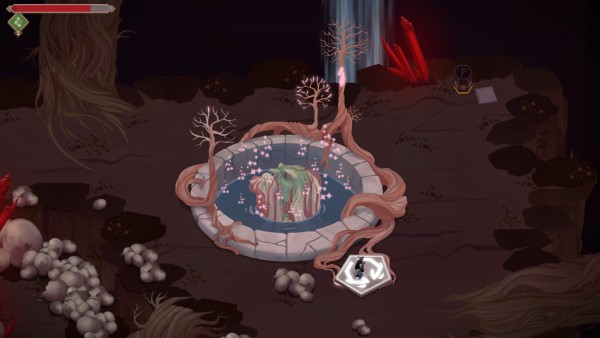 Jotun supports its beautiful artwork with an excellent audio experience. The sound effects are solid and the soundtrack is fantastic. The music goes from minimalistic strings to epic scoring at the right times. All of the voice acting is done in Icelandic. While I cannot attest for the actual accuracy or quality of the Icelandic, the voice actors do an excellent delivery. I believe the decision to record all the lines in Icelandic instead of English is a good one, as it gives the game an authentic Viking feel. 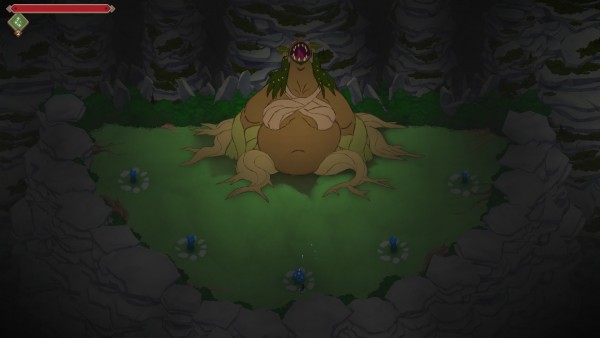 Jotun is an excellent game that has some weak moments. The exploration parts of the game really bog things down and the hitboxes are a little off at times; but this is all easily compensated for by epic boss battles, gorgeous artwork, and solid audio. The game’s difficulty means it isn’t for everyone, but those willing to challenge themselves will be rewarded by a stunning experience.